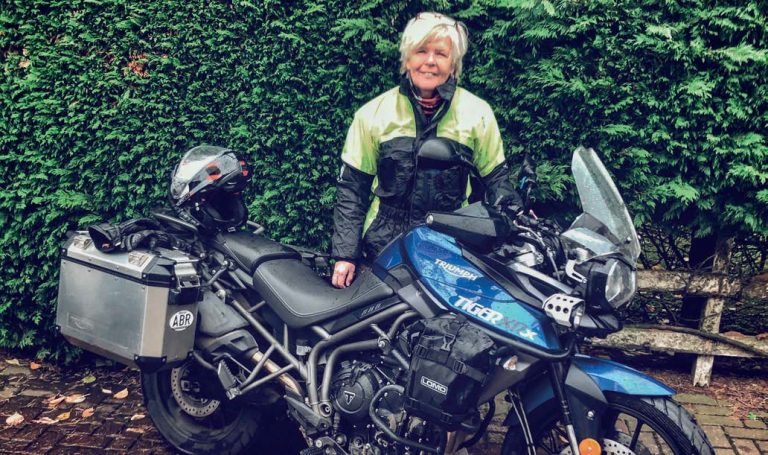 Dream bike? I already have my dream bike, my Tiger.

Most expensive motorcycle accessory you’ve ever bought? I’m a Triumph clothes and accessories addict and I recently added the Triumph Wax Jacket to my collection.

Mountain passes or desert pistes? I haven’t ridden in the desert yet, so I would have to say the mountains, especially the Picos de Europa in Spain.

Tent or hotel? I enjoy both. Camping if I’m away for a couple of nights, but on longer trips, I like hotels for the comfort.

Lifelong ambition? I took early retirement last year so the plan is to see as many places as possible and to keep having amazing adventures. My list of trips for 2021 is already getting longer.

Most dangerous motorcycling moment? I did once end up in a ditch in the Picos De Europa while going around a bend. Thankfully, two Spanish guys came by and helped my poor husband drag the bike out. The only thing damaged was my pride and the brake pedal.

Most memorable motorcycling moment? Riding from Saint-Malo to Northern Portugal about three years ago on my Bonneville SE. Normally we would take the ferry to Santander, but this time we decided to ride through France. Many see the motorway as a boring road, but I found it fantastic. The best part for me was after Bordeaux, I could smell the pine trees as we rode along. We arrived at our first hotel in Castets after riding just under 400 miles and crossed into Spain the next day.

What do you miss most when travelling? My son and my pug Betty.

If you could meet any person, dead or alive, and ask them one quest ion, who would it be and why? American aviation pioneer and author Amelia Earhart. She was an ordinary girl attempting unattainable goals and had a passion for adventure. My question to her would be: As a woman living in the ‘20s and ‘30s, what motivated you to attempt such aviation records?

If you want to be a reader exposed in a future issue of Adventure Bike Rider, email james@adventurebikerider.com and if we feature you you’ll get a free year’s subscription to the mag. You can’t say fairer than that, eh? 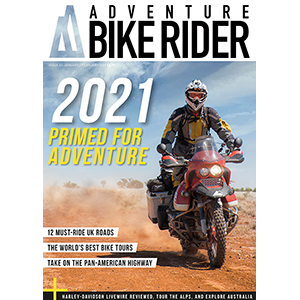 Techniques: Riding With A Pillion