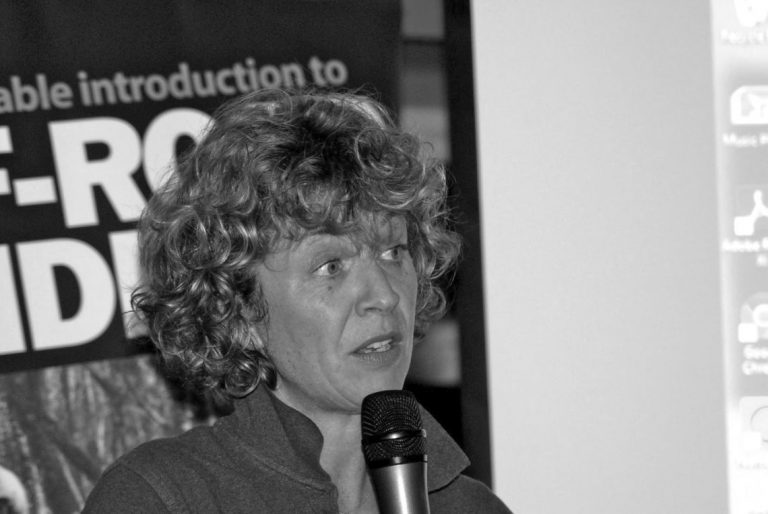 In 2006, Patsy Quick became the first British woman ever to finish the Dakar. It took four attempts, and on the first, she crashed so badly the doctors had to remove her spleen. Patsy now trains and prepares other riders for the Dakar, as well as competing in motorcycle rallies a little closer to home…

Where are you now?

Albania. I’m doing the six-day Rally Albania. I have some customers with me, too. I do the assistance, plus I’m riding this one. I’ve had a resurge!

What’s the appeal of the smaller rallies?

The thing about these European rallies is that they’re much more achievable from a skills, financial and time point of view than Dakar, which has got very commercial. [Smaller rallies] are a lot more about the camaraderie, great riding and navigation. I wanted to ride Rally Albania because I heard it’s stunning up here in the mountains.

Where are they held?

There are two in Greece. Hellas in May. There’s a break, because of the heat. Then back to Greece, then into Morocco. Between that and my Desert Rose Adventure Riding Academy, it’s all quite busy.

Any plans to ride Dakar again?

You can never count it out. The Dakar’s changed a lot and I feel privileged to have done it in Africa. That’s my love, Africa, and what Dakar was about then. But it has changed, and it’s not going to go back. That’s just the way things move forward, the way events like that attract sponsors. It’s natural progression, I suppose.

Did you enjoy riding Dakar?

Do you miss it?

It never leaves the system, and even this year it’s very hard. I did it for 10 years, whether it was riding or on the assistance side of things. Last year I had a break from [Dakar], and it’s like, ‘do I really want to go back?’ I think the type of person now that wants to achieve it is different. Once upon a time, people would literally remortgage their house just to do Dakar. Whereas now it’s a little bit more ‘tick that off the list,’ of things to do in life. The kick-side of that is that when they do, [the race] gets more exposure and that helps amateur riders get sponsorship sometimes.

Do you ever regret getting into it in the first place?

No, no, not at all, completely the opposite. I love it, it’s become my passion now, and my business. I’ll probably not make any money from it, but it’s my passion. And Desert Rose Adventure Riding Academy, although different, is about passing on that information to other people.

Do you feel it’s your responsibility to do that?

Yeah, I do. It’s rewarding to see people gain confidence and skills in just six hours at the school. Because 80 percent of our customers are road bikers, they’re not necessarily ever going to ride seriously off-road or buy an off-road bike, but if they go back and roam the road being much safer and more aware, I feel that we’ve done our job.

You finished Dakar on your fourth attempt; would you have tried a fifth time had you not finished?

Knowing my personality and all the friends that were supportive along the way, I couldn’t bear the thought of not achieving it. I know I probably would have given it another shot, and thankfully, I’d like to think I’d have had the support of the people around me, which is important. Would you have done it to the death? Yeah, it was getting like that to be honest! We’d had a fair amount of bad luck and it was getting to the point where even the year we finished (2006), Zippy, my co-rider, had to tow me 50 miles in sand and it was like, ‘one of us has got to finish this year!’

You’ve described completing Dakar as an anti-climax, what did you mean by that?

It’s something I warn a lot of other riders that come with me on the rallies. Even a six-day rally like this one is escapism. People come to get away from life, and then they have to go back to the real world and face everything as if it never happened. With Dakar, if you’ve worked all year for it, at the end it can feel like a huge anti-climax. People use the word depression too easily these days, but you do feel quite low at the end.

How long did it take you to get over that?

It was probably a good six to eight weeks. I just channelled myself into the assistance side, building other bikes for riders. But yes, for 11 months you live and breathe it, and then you get there, and you cross the line and think, ‘oh, is that it?’

Does it become addictive?

Yes, although sometimes I question other riders and why they still go back year in and year out. If you think you’re good enough that you can better your position, possibly, but I think once you’ve achieved that you have to ask, ‘why are you going back?’ People remember you finishing, whether you finish 20th or 22nd or 100th, it makes no difference really.

What type of person does Dakar?

You have to be very self-motivated, driven, selfish, and you really have got to achieve the goal that will push you mentally and physically. I struggle to explain it to the lads I train for the events. They’re all, ‘yeah yeah,’ and then in training, they have one little off and they say they’re not going to ride tomorrow.

And you could come off the first day of the Dakar and start carrying an injury. I don’t think people realise unless they’ve been in the situation before how to monitor their pain levels. And with all the sponsorship it’s almost become too easy now to quit, whereas if you’ve remortgaged the house and you only have one shot at it then you’re really going to push yourself.

Does Dakar put too much pressure on you?

Yes, it does, and when you finish it you put this huge amount of pressure on yourself because people expect you to be an amazing rider. But riding ability is a small percentage. You have to be one stubborn person who likes to endure quite a lot of pain and will put up with a lot to get to the end. People don’t know until they’re put into a situation where they’re mentally and physically exhausted but still need to dig to find that extra bit. It is a battle; it’s you against the elements of the piste and it’s what I like.

What advice do you have for anyone wanting to do Dakar?

Ask yourself why you want to do it. I get lots of guys ringing up saying they want to do Dakar, and it’s awful because it feels like I’m pre-judging them over the phone. Then they come along, and I look at them and think, ‘no way on earth’.

With the way the event is televised, people only see the glamorous side of it and think it’s not that difficult, but it is difficult. If you’re going to go and blow all that money on taking part I don’t understand going and not being prepared to give it everything. Because that’s what it takes to finish.

What’s the future for the Dakar?

I can’t see it going back to Africa. I think it will stay [in the Americas], because of the sponsorship and investment money it can attract. And other events will come around. There are events in Africa now that are more like Dakar used to be. And to give an idea, Rally Albania cost €600 (£511) to enter; my full assistance package, which includes having your own bike flown out there, maintenance and prep costs £1,900, or to rent one of our bikes you’re looking at a couple of hundred quid a day.

So you could do a six-day trip, taking part in a competitive overseas rally, for maybe £4,000. Which is more doable. And probably more enjoyable.