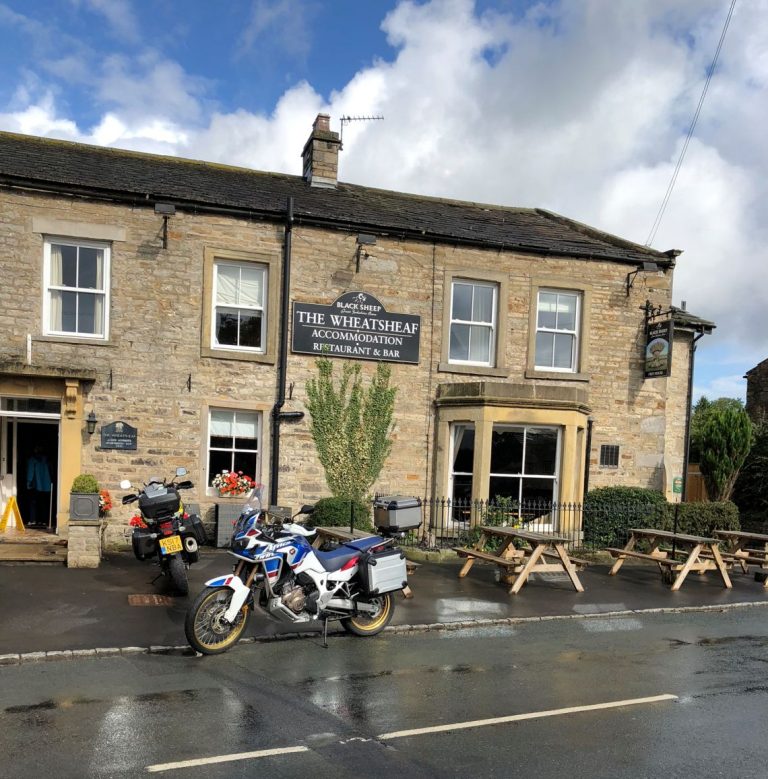 After spending an afternoon fitting a Givi top box, I decided it was time to give the Africa Twin a two-up with luggage test ride to see how well it would fare as a touring bike for a loving couple. Just an overnight in the Yorkshire Dales but obviously, as the missus was coming, it took a little while to pack all of life’s necessities into the excellent Honda pannier bags that fit inside the panniers.

A room was booked at The Wheatsheaf Inn, Carperby, which is situated in the Yorkshire Dales. If you’re planning a ride in this area, I fully recommend this pub. It’s got good food and a great choice of ales, what’s not to like? We set oﬀ on the day and foolishly decided to take the M6 to do a little mile-munching. Big mistake.

At the time of our ride, the M6 was (and still is) being upgraded to a so-called ‘smart motorway’, which only meant miles and miles of 50mph road works and the accompanying traﬃc jams.

Filtering is not so easy with panniers, but we did manage to avoid some stationery traﬃc. We pulled into a service area for a smoke for me and a hot drink for the missus. As this was her ﬁrst trip on the Africa Twin I asked how she was getting on with her pillion perch.

Her criticism was both positive and negative. We used to own an earlier Africa Twin, the RD07a model, and the dual seat on that bike was a little cramped for long days. The new bike is a great improvement, deﬁnitely more room for two and very comfortable in standard form. There’s adequate legroom, even though the panniers infringe a little.

Locating them a few millimetres further back would make a big diﬀerence to comfort. Climbing on and oﬀ the bike, which is always a bit tight with luggage ﬁtted, she found the pillion pegs could be a little larger. But generally, a positive experience. Leaving the service area, the rain started.

My waterproof over trousers were in the top box, and I was wearing my Hood jeans hoping for the sun to shine. This is when I discovered that the larger fuel tank and screen of the Adventure Sports kept me amazingly dry, even the summer gloves I was wearing never got too wet thanks to the eﬀective handguards.

I did have to pop the heated grips on, though. In my experience, the heated grips don’t oﬀ er quite as much heat as you’d like when they’re in the high setting, though they were adequate for a damp day in autumn. At last we left the M6 car park and got into the great riding roads that Yorkshire oﬀers us bikers.

I put the bike into sport mode, and this was perfect for the roads and lanes we were riding. Riding the DCT model, if I found that the gear selected didn’t suit me, it was easy to ﬂ ick it down or up using the paddles on the left bar.

Throttling down on some of the steep descents gives a lovely burble from the exhaust on the overrun and a satisfying bark when opened back up, just loud enough without being too anti-social. The exhaust was updated by Honda speciﬁcally with better sound in mind, and the Japanese company has excelled here.

Engine braking can be dialled in on the dash controls, and it must be said, after early reservations and frustrations, I’m starting to really enjoy the DCT box. The sun decided not to shine on us and the rain persisted, but the Africa Twin never gave me a moment’s worry. It’s stable and positive in all the weather conditions we endured. Let’s hope the next run out is just a little drier.