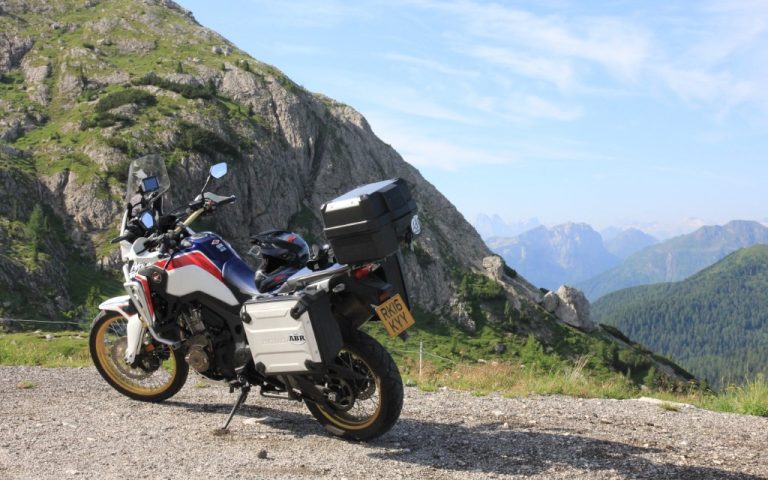 Is the Africa twin the best off-road 1000cc motorcycle about? Alun Davies certainly thinks so…

There are some advantages of living at the end of a remote country lane, and when I pause for reflection I could list them. However, at this time of year, pausing for reflection could mean I end up sliding down the road on my arse, with the Africa Twin taking time off to examine the winter fauna of the local hedgerows.

You see one of the disadvantages of living down our country lane is that it’s impossible to ride to the local shop for a pint of milk and return without looking like I’ve just spent a week at Honda’s Deep Bog Riding Centre.

Not that Honda has such a venue, but if the company wanted to open the world’s foremost mud plugging school, then they should speak to my local farmer who, on current performance, has the world’s best business plan for such a venture.

Right now, I don’t need to go searching out OS maps for evidence of our diminishing green lanes, as our agricultural neighbour has taken it upon himself to convert any and every stretch of tarmac within pheasant shooting distance into the sort of trail which would have the TRF claiming historical rights.

I’m sure you’re all aware of this, but mud on tarmac is a far more slippery affair than mud on mud, so I’ve taken to riding across his field rather than take the far more dangerous option of the road, which brings me nicely to how competent I’ve been finding the Africa Twin in off-road situations over the past year.

It’s still a big old boy with a 242kg kerb weight (I’ve got the heavier DCT version) but the combination of design, balance, ergonomics, suspension, high ground clearance and a 21in front-wheel makes the Honda a serious contender for the best off-road 1000cc motorcycle you can currently buy.

From our local, gentle green lanes in the Cotswolds, to the more challenging trails in Mid Wales and high rocky passes in the Alps, the Africa Twin has cracked them all with flying colours. And what’s more, the distant trails have been tackled with panniers and enough gear strapped to the bike to mount a month-long assault on Everest.

Anyway, just the other Sunday I found myself riding through the Cotswolds to my default coffee stop at Broadway Tower when a Fireblade came screaming past on a blind bend. He was a pleasant, psycho cockney who gets up to the Midlands every now and then for a cappuccino and, as he told me, gravel rash. The perfect winter Sunday, apparently.

He also informed me that he was after an adventure bike, the Africa Twin his current object of desire and that the ‘fullay ortmatick’ version was his preference. When I asked him why he was moving from a Fireblade to an Africa Twin he informed me that ‘I live down the lanes in Surrey mate, and you need an off-roader at this time of year’. Quite.