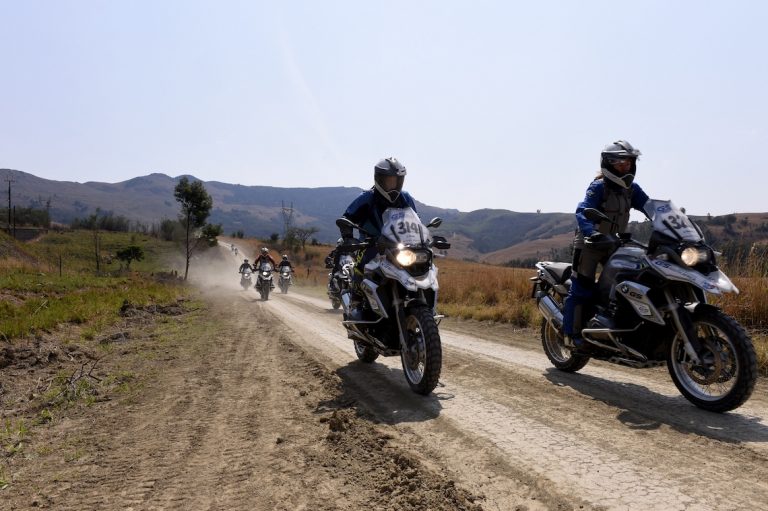 Every two years the world’s best GS riders are crowned at the international GS-Trophy, but there’s always been one thing missing: an all-female team. Andy Dukes reports from the world’s first women’s GS-trophy qualifiers

There’s a worldwide community that’s united by the iconic BMW GS motorcycle and every two years, usually, somewhere in the middle of nowhere, a group of amateur riders from across the globe gather to battle for the kudos of being crowned the best GS-riding nation in the world. Next February, the International GS Trophy will take place in South East Asia and for the first time ever, an all-female team will take part. An intensive qualifying competition recently took place in South Africa to decide which three ladies will ‘take on the world’ in Thailand next spring.

The GS Trophy is a motorcycling phenomenon, but what exactly happens there? Simply put, national teams comprising the best GS riders in the world gather to explore some of the most engaging roads, tracks and trails on the planet, while enjoying a friendly series of competitions, usually in the form of riding and navigation ‘specials’, that will determine who wins the coveted title of International GS Trophy champions. 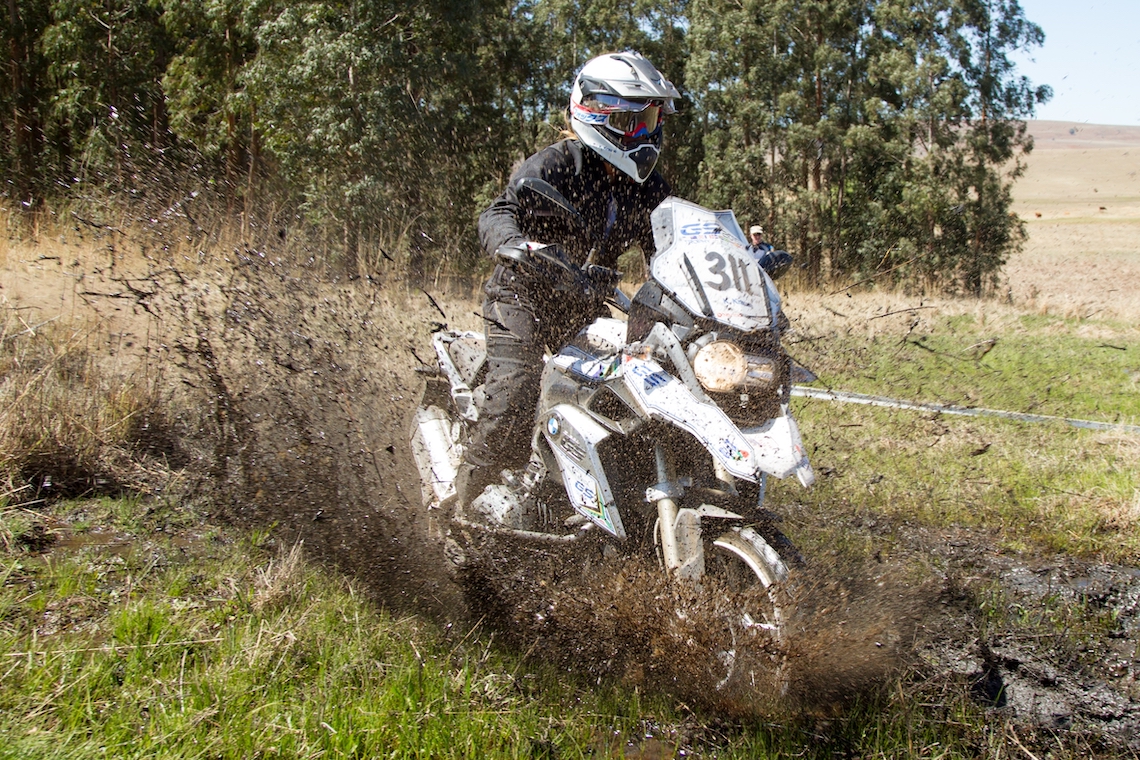 Along the way, interaction with the local communities and respect for the environments that this travelling circus passes through ensures that a positive motorcycling message is communicated.

It all started in the desert in Tunisia back in 2008 with just five teams, then went from strength to strength in South Africa in 2010 (when the UK team won!) and got even bigger in Argentina and Chile in 2012. In September 2014, the fourth edition of this unique customer event took place in Canada, where the biggest GS Trophy to date saw 16 teams representing 19 nations line up on the start line near Calgary. But there has always been one vital ingredient missing – a women’s team.

For sure, women have been involved in many of the national ‘qualifiers’ across the globe, but haven’t yet made it down to the final three in these intensive, hard-fought and often physically gruelling competitions. However, with an increasing amount of adventure bikes being sold to women, and more ladies actively exploring their passion for off-road adventure riding, BMW Motorrad decided it was time to introduce some ‘girl power’.

A worldwide search earlier this year for a trio of lady GS riders to form a team to contest the International GS Trophy finals produced 119 initial applications by girls from 29 different nations, all keen to show that they had exactly what’s needed to represent their country, and also their gender, in the most famous competitive off-road customer motorcycling event in the world.

From the initial applications, a jury decided on a shortlist of the 10 most suitable females to go to South Africa for the qualifying event. The 10 riders (from UK, France, Spain, Iceland, USA, Canada, Brazil, Thailand, Australia and South Africa) ranged in age from 26 to 46-years-old and at stake for them was the chance to make history by forming the first-ever female team to enter the International GS Trophy, not to mention a ticket to Thailand to take on the boys next spring.

The venue chosen for this unique ‘qualifier’ was Country Trax, a 600-hectare farm and off-road training academy founded by legendary BMW riding instructor Jan du Toit. The farm (near Amersfoort in Mpumalanga) was also the location for the recent national GS Trophy qualifier, and Jan and his team of instructors would put the girls through many of the same exercises faced by the best South African and Namibian riders, who recently spent three days immersed in rigorous challenges trying to win one of just three places available on Team South Africa. And that was after eight separate regional qualifying events across the country.

The International GS Trophy female team qualifier officially got underway on Sunday 13 September, using GSs equipped with original BMW Motorrad accessories to protect against the rigours of off-road competition riding. No sooner had they arrived that the challenges began, the first one being a race to pitch their tents for the night, against the clock…

This was swiftly followed by ‘Blindfold Cone’, where the girls took it in turns to ride, completely blindfolded, for approximately 35 metres up a gradient and from one cone to another. The winner would be the one who stopped nearest to the second cone. Easier said than done of course, with bikes heading off in all directions, sometimes causing spectators and farm dogs to run for cover, and other times stopping far too short of the mark.

What followed next was just as entertaining. Known as ‘Fritz-garden’ (in homage to Fritz, the only person who has cleared the course with a 100 per cent record) this skills challenge consisted of a slow riding trial on a tight course, keeping inside a series of blue cones while trying to knock over as many small orange cones as possible, but only using the bike, not the feet! This was all about handling and balance.

And while on the subject of handling and balance, ‘Rope the Tree’ was the next challenge, which saw the girls attempt to wind a rope around a tree and hang the eyelet on a nail, without putting a foot down or stalling the engine. The usual penalties applied but with no throttle to play with (the right hand was holding the rope!) clutch control, balance and momentum were key to success.

A welcome dinner followed but this wasn’t the end of the day for the girls, who had one final challenge to complete, despite it being pitch black outside. ‘The Maze’ involved negotiating a labyrinth by riding along a path between a wall of straw bales, with tight and hidden exit points to each sector. Sounds confusing? Well, that’s the idea of a maze, right?

They fought hard against the clock and put their hearts and souls into this tricky task. Late in the evening, the rankings were added up and the top three girls announced. After day one it was Jennifer Huntley from the UK in third, behind local lady Morag Campbell, with Australia’s Amy Harburg in the lead.

Day two started early at Country Trax for the multi-national squad of ladies, who had their first media appointments – photo shootings and interviews – at 7 am. Following a traditional African breakfast, it was straight on the bikes for the first of many challenges they would encounter throughout the day.

‘The Forest’ took them on a tight, technical loop in the hills, while ‘The Rocks’ tested their trials riding skills to the limit as a track of loose rocks and boulders had to be overcome before a steep descent also tested their ability to stay within the lines and stay on the bikes.

Then it was time for ‘The Mud’ – an evil challenge if ever there was one. Not only was the mud deep and incredibly slippery, but it also stank (probably something to do with the nearby cows) ensuring that the rider and anyone caught behind the spinning rear wheel of a GS was covered from head to foot. The task was simple: get from one side of the boggy mess to another, whichever way you can.

Afterwards, the bikes and the competitors needed to be pressure-washed clean but there was little time for drying out, because it was time for ‘Suffer-ring’ – which consisted of riding rings around a huge dug-out, before dropping about two metres into the pit and riding ‘wall of death’ style laps and avoiding clipping the sandbanks, before popping the GS up and out again, all against the clock of course.

What followed next was probably the hardest challenge faced by the girls so far, the ‘Up and Downs’, which saw them riding a carefully marked out course with steep slopes, loose gravel and numerous adverse camber turns. Time penalties were added for riding outside the markings, putting a foot down and of course dropping the bike, but the level of riding ability, bravery and commitment shown by the girls was admirable. Some were quick, some took it slow, but everyone gave it their best shot.

The final challenge of the day took place on one of Country Trax’s sandy circuits and was simply known as ‘The Oval’. But prior to power-sliding their bikes around the course, the ladies first had to negotiate a tight quadrant and then slalom through a series of parallel cones. It wasn’t the most technical exercise they had encountered, but it was probably the most fun to ride and a great way to finish day two of their GS Trophy qualifier.

With so many challenges completed and a complicated scoring system that took into account penalties for all manner of riding infringements, it was a nervous group of women that awaited the announcement of the points totals that evening. The surprise of the day was France’s Stephanie Bouisson, who not only topped the day two score sheet, but also leapt from fifth to first place in the overall standings.

On 15 September, the final morning of the competition, there remained only two challenges to complete, but with the stakes so high, and so much to lose (or gain), decisions had to be made on whether to take big chances or to play it safe. The first challenge (‘Elephant Turn’) required the girls to ride approximately 50 metres through deep sand, power-slide their bike around a cone and then return to their starting point. The second was simply entitled ‘Skills Challenge’ yet it was anything but simple.

There were a number of tough obstacles to overcome on a flowing circuit designed to expose any weaknesses in riding technique, including a 360-degree ‘coffee-grinder’ pipe, a see-saw, a log-jump, deep ruts and parallel logs, to name just a few.

When the challenge was completed by all ladies, the marshals and judges took their leave to collate the results, while the 10 competitors all embraced and offered each other words of encouragement completely in keeping with the true Trophy spirit.

The spirit and sense of camaraderie among the 10 ladies was inspiring throughout, given that they come from across the globe and are united only by their love of riding GS motorcycles. Their final challenge was to strike their tents, pack their bags and await the results.

The results were not long in coming, with all competitors honoured for their amazing efforts during the course of this hard-fought, yet hugely entertaining qualifier. After an intense series of 13 separate challenges held over three competition days, France’s Stephanie Bouisson emerged as the overall winner, followed by Australia’s Amy Harburg in second place, with South Africa’s Morag Campbell close behind in third. All 10 girls battled valiantly, but these three have won the ultimate prize – a place on the first ever female team to contest the 2016 International GS Trophy in Southeast Asia from 28 February to 5 March 2016.