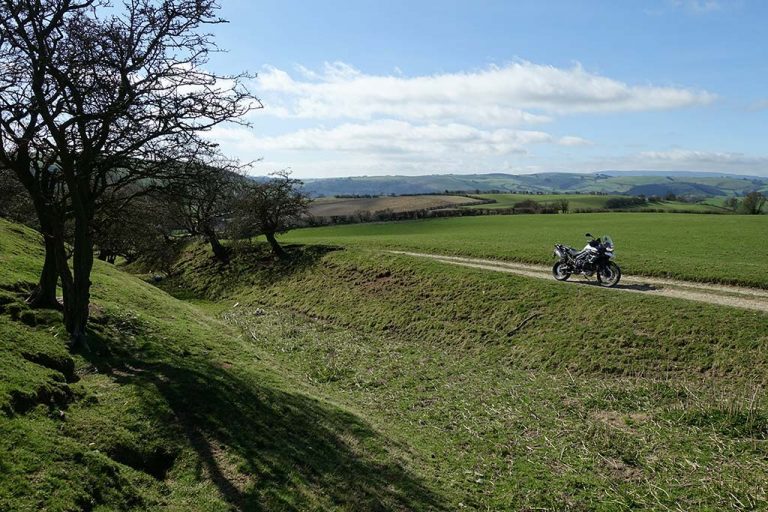 The Mercian King Offa was a motorcycle visionary. How do we know and what’s the evidence? Well it’s like this, a ride following Offa’s Dyke Footpath is close on the perfect UK motorcycle trip, Alun Davies tells us more

King Offa is documented as being a feisty old boy always up for a good scrap and the occasional beheading, if he were alive today and had a dyke in mind I’m pretty sure we’d see very few planning regulators, NIMBYs or health and safety inspectors with all four limbs intact. 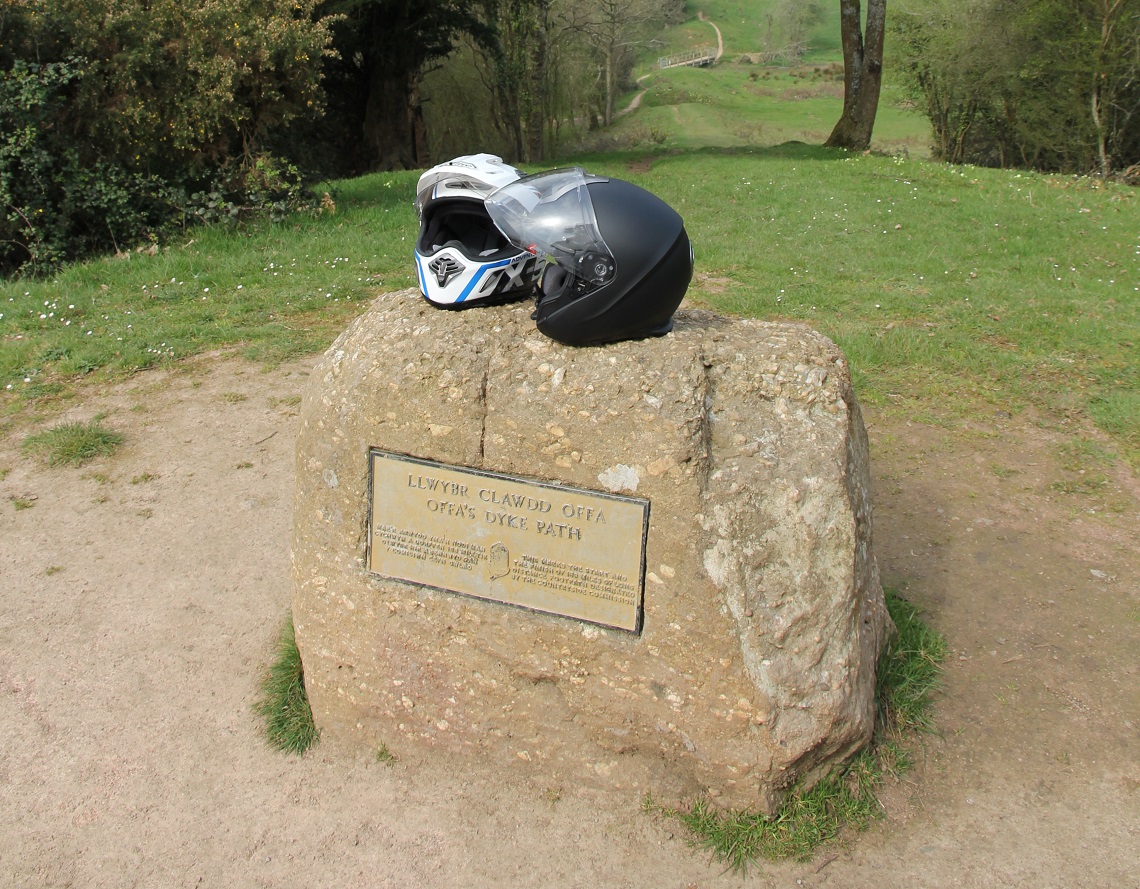 Historical evidence shows that Offa was the perfect role model for the modern-day sociopathic politician displaying an all-encompassing lust for power and corruptible desire for a legacy. Perhaps these are the characteristics required for commissioning such structures as the Dome, HS2 and a 176-mile-long earthen barrier along the border of Wales and England stretching from Chepstow on the Severn Estuary to Prestatyn on the North Wales coast.

Whilst ‘Offa’ and the ‘Dyke’ are synonymous with each other more recent work by archaeologists and historians has thrown doubt on just how close this connection is with evidence pointing to some sections containing earlier Roman construction, a smattering of pre-Anglo Saxon work and carbon dating pointing to the period between 757 and 796 when Offa ruled the roost. 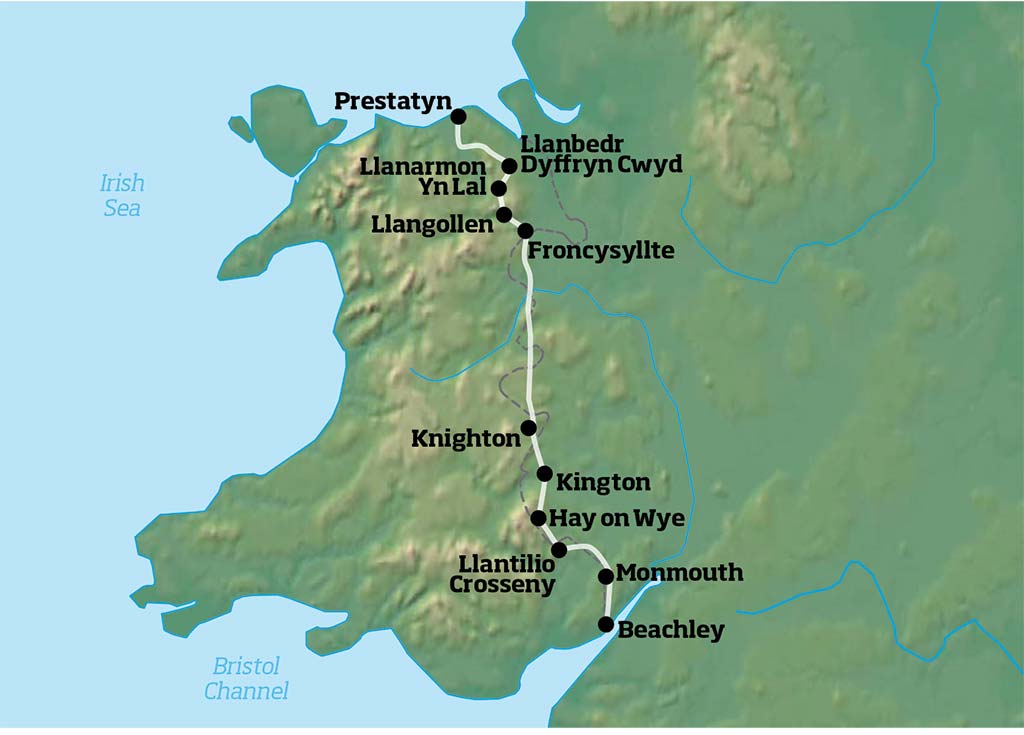 With the evidence available it’s more than likely that the Dyke was a long-term project over several generations to keep the Welsh at bay, with the greater part constructed under the rule of Offa. Not that such things matter when you’re standing near the southern terminus of Sedbury Cliff s on a wonderful, bright and sunny spring morning overlooking the Severn Estuary.

Sedbury Cliffs lie just south of Chepstow and a touch north of the older of the two Severn Bridges. It’s not possible to ride to the cliff s so if you want to complete a full sea to sea journey you’ll need to dismount and walk a quarter of a mile from the nearest car park to the cliff edge. It’s worth the effort for the views over the Severn and you’ll be treated to your first encounter with ‘The Dyke’, remnants of which run alongside the footpath.

Heading north from Chepstow along the A466 you enter Britain’s mini version of the spectacular Mosel Valley in Germany as the road sweeps along the banks of the meandering River Wye. Historical buff s will want to stop off at Tintern Abbey, the remains of which inspired the writers William Wordsworth and Alfred Lord Tennyson to put verse to paper.

It’s going to be difficult to turn off the sweeping A466 but a short detour over to the East Bank of the Wye and up to the village of St Briavels is well worth it just for the ride back down into the valley where you’ll be treated to the best views of this Area of Outstanding Natural Beauty which has been described as one of the most dramatic and scenic landscape areas in Southern Britain.

Having passed through the county town of Monmouth the B4233 is a delight as it traverses the rolling countryside towards the Black Mountains. The Offa’s Dyke Path (ODP) passes through White Castle, a well preserved medieval fortress, which is only a mile or so from Llantilio Crossenny on the B4233 and once again worth a visit if you’re into historic monuments.

The next section up to Hay-on-Wye is dominated by the Black Mountains and in particular the single track road up the Vale of Ewyas to Gospel Pass which at 549m, is said to be the highest tarmacked pass in Wales. Whatever you do, don’t miss this section which, on a clear day, will provide you with stunning views all along its length. At the pass, the whole of Mid Wales is laid out before you. The valley also contains the ruins of Llanthony Priory dating back to 1100.

From Gospel Pass, it’s all downhill to the world-famous book town of Hay on Wye. The Hay Festival of Literature and Arts runs over ten days from May to June and has been described by Bill Clinton, a past visitor, as ‘The Woodstock of the mind’. Quite an achievement for a small town on the Welsh/English border to gain such a reputation, but for our purposes, it’s also the ideal stop off for coffee and cream cakes.

If you’re into green lane riding then you may want to stop off for a while in The Begwns, a hilly section just to the northwest of Hay which features a host of off-road legal riding routes. For those sticking with the ABR route, the next section is along more narrow lanes through the charming rolling countryside towards the market town of Kington.

Just before Kington, you’ll notice a prominent whale back ridge-line along which the ODP runs. This ridge will have special significance for riders of a certain age. Hergest Ridge was the name of Mike Oldfield’s follow up album to his best selling debut Tubular Bells. Surprisingly Hergest Ridge hit the number one slot first and was knocked off the top perch three weeks later by…Tubular Bells. Anyway, the ridge inspired Oldfield, who was a local resident at the time, to write the album.

From Kington to Knighton is more of the same glorious countryside and roads with little traffic, there’s also a short green lane you can tag in between Evenjobb and Thorn. By now you will have noticed that you’ve been crisscrossing the ODP at many points but just to the north of Knighton, you get your first opportunity to ride in the Dyke following a legal green lane.

Before we move onto the green lane you might want to stop off in Knighton to visit the Offa’s Dyke Centre which is staffed by the Offa’s Dyke Association and features a forlorn-looking waxworks model of the Mercian King.

To ride in the Dyke you’ll need to head to the village of Knucklas, cross the River Teme and follow single-track lanes to a point on the Ordnance Survey Map marked up as Garbett Hall. If you want to stick to tarmac then Newcastle is your next waypoint.

The lane from Garbett’s Hall is easy going and big bike friendly where you’ll only encounter problems on wet days if you’re shod with road tyres. The trail heads up the hill and is well signed. The views are superb and on the blue-sky day that I passed through I counted five buzzards eyeing me from the trees alongside.

The trail does not actually run in the Dyke but does cross it at a few points. For the most part, it runs directly alongside and there’s no mistaking the ditch and high sided eastern rampart. It’s amazing to think that the construction took place over 1,300 years previous although back in the day it would have been over 20m wide whereas now it’s far less.

At the end of the lane, you have the option to follow another green lane directly opposite or turn right onto the tarmac. Either way, it’s onto the village of Newcastle where you cross the River Clun.

At this juncture, there are a number of minor single-track roads that you could follow to Lower Edenhope and onto Montgomery but I urge you to seek out the road up Folly Brook Valley and up onto Edenhope Hill to the crossroads with a road sign peppered with shotgun holes.

From here take the road over the cattle grid across Edenhope Hill where you’ll once again cross the ODF and be treated with spectacular views over the Shropshire and Mid Wales countryside.

The next stage to Montgomery takes you down from the high ground and into the wide River Severn Valley. You now follow the ODP to the east of Welshpool joining the A483 at Buttington to Llanymynech.

From here there’s a green lane you can take that skirts around the west side of Llanymynech Hill or make your own way on the tarmac to the village of Porth Y Waen and onto Craignant and Bronygarth.

At Bronygarth you have three options; heading into Chirk and onto Froncysyllte taking A and B roads; the more direct single track lanes over the 395m high Blaenau Uchaf or the more challenging green lanes to Llangollen.

Be warned that the Allt y Badi green lane is very steep and rocky and probably not the place to be on a big adventure bike with road tyres unless you’re very competent and not averse to expensive repairs. The Llwybr Ceirog Trail is less extreme but steep in parts so if you’ve any doubts about your ability, take the tarmac options.

Whichever way you arrive in the Vale of Llangollen make sure you check out the famous aqueduct carrying the Llangollen Canal between Froncysyllte and Trevor. Constructed in 1805 it is the longest and highest aqueduct in the UK. Built by Thomas Telford it measures 307m long and was inscribed as a World Heritage Site in 2009.

The ODP now turns west passing high above Llangollen on the craggy Creigiau Eglwysteg escarpment. There are single-track lanes which follow closer to the ODP but at this juncture, it’s only natural to divert off the trail to take in the A542 up and over the Horseshoe Pass with a stop off at the biker’s Mecca known as the Ponderosa Café.

We’re now on the last leg of the ODP which follows the spine of the Clwydian Range of hills and mountains which runs north-south and end at the coast in Prestatyn. What’s interesting here is that the Dyke doesn’t follow the Clwydians but the path does and so will we as it’s a surprisingly scenic area which has again been designated an Area of Outstanding Natural Beauty.

Initially, we head north on the eastern side of the range crossing over to the west and the village of Llanbedr Dyffryn Clwyd before skirting Moel Famau which at 554m is the highest summit in the Clwydians. Near the village of Llangwyfan green laners will have the option of a couple of routes higher up in the hills whilst road goers will carry on through to the village of Dyserth. Once again it’s not critical that you follow the exact route and there’s lots to discover by taking smaller roads east up into the hills.

From Dyserth it’s a short hop into Prestatyn, the North Wales coast and the end of the trail at the sandy beach opposite the Nova Centre on the seafront.

I’ll finish off by saying that I guarantee if you follow this trail and have some decent weather along the way then you’ll experience some of the best days out you’ll ever have on a motorcycle in the UK. Overseas readers take special note, this route will take you to parts of the UK which will be the highlight of your UK tour and provide memories that’ll last longer than the concrete of our major cities.