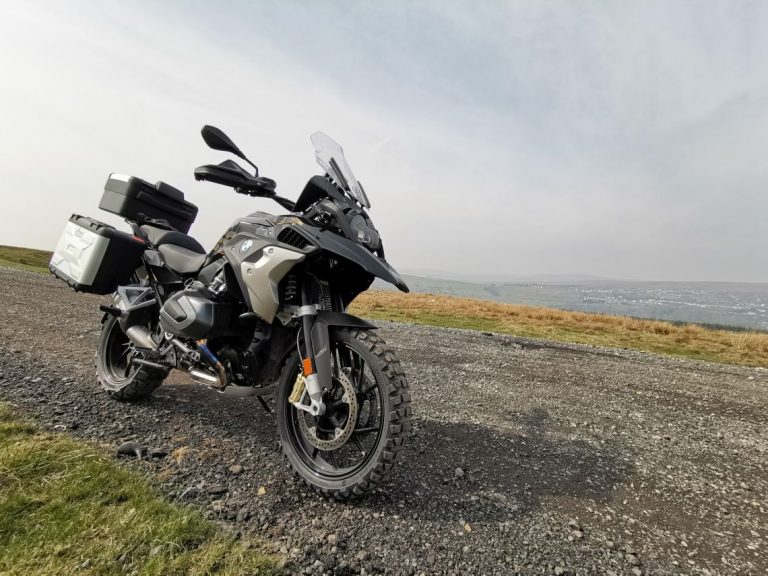 During the making of this issue of Adventure Bike Rider magazine I picked up my long-termer for the year, a BMW R 1250 GS Exclusive TE. The Exclusive TE is the top-spec road-focussed GS and is one of five R 1250 GS models available for 2019.

It comes with a top box full of extras and is decked out in a Black Storm Metallic paint job that’s coupled with gold calipers to give it a luxurious aesthetic.

With a price tag of £16,500, as opposed to the £13,415 of the standard GS, you’d certainly hope it distinguishes itself from the base model, and it does. We featured a full review of the 1250 GS in the November/December issue of ABR, and our bike tester, Julian, was full of praise for BMW’s battleship-esque adventure bike.

Especially so when it came to the all-new Shift Cam system that had been incorporated in the boxer engine and the increase in capacity from 1170cc to 1254cc.

What this, coupled with the increased capacity, has done is give the 1250 more power, smoother, more linear power delivery, and slightly better fuel economy. Most excitingly though, is that this improvement is instantly noticeable when you sling your leg over the saddle and twist that throttle for the first time.

The new motor just feels smooth as silk all the way through the rev range, offering linear power delivery no matter how much you’re giving it. While a lot of my time on the GS has been spent blasting up and down motorways or pootling to and from work, a few days before going to print I got it fitted with some new boots (Bridgestone Battlax Adventurecross AX41s) and headed to Wales to ride a coast to coast route (which you can read about on page 57).

Taking in a mix of winding mountain roads, fast, sweeping A and B roads, mossy, greasy single-track country roads, and a few green lanes for good measure, it was a good opportunity for the bike to prove itself. I rode for around 16 hours on that day, and I was impressed with the overall comfort provided.

The seat is the right firmness and the seating position is good for my 6’2 frame, my knees not having to bend too much and my torso being kept nice and upright.

Off-road, I would have been more comfortable with higher bars to make standing more natural and comfortable (nothing some bar raisers can’t fix), and riding the Exclusive model, the road-focused pegs are noticeably too narrow and slick (invest in some wider serrated pegs if you ride off-road regularly, or get the Rallye version of the bike, which is set up with off-road riding in mind).

While I’ve largely been enamoured with the GS, there are a few bones of contention I have with it, most of which are only noticeable at night. Given the cost of the bike and its status as a class-leading machine, I would have liked back-lit switchgear as there’s a lot to fiddle with on the handlebars.

At the same time, I also found the dipped beams to be a bit weak (full beam is great though), and the lack of cornering headlights is a noticeable omission when compared to the likes of direct competitors in the form of the KTM 1290 Super Adventure and Ducati Multistrada 1260.

I’ve logged just over 1,000 miles on the GS so far, and I’ve got a fair few trips planned on it over the next few months, including some two-up tours. I’ll let you know how the bike gets on!