A Road Trip to New Mexico 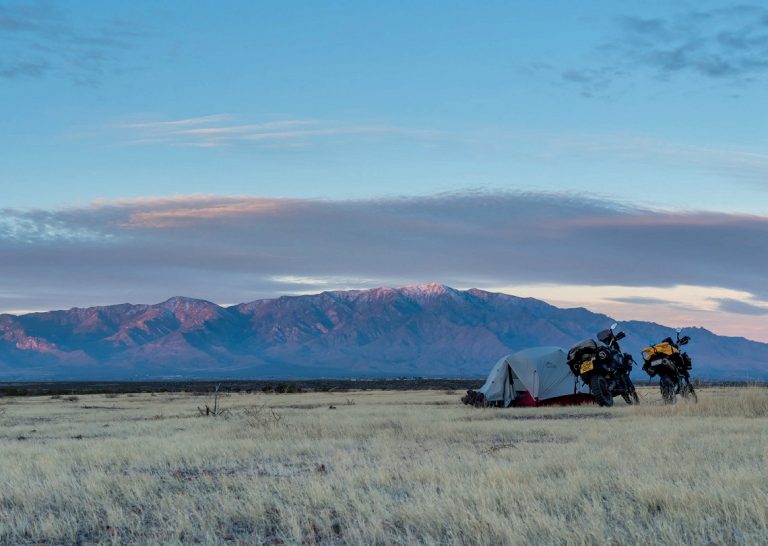 Lisa Morris discovers a land of raw beauty as she rides through the state of New Mexico.

With growing reluctance, I dispensed warm goodbyes to biking friends in Arizona, saddled up and turned the key in the ignition. Internalising my petulance in the process, I was happy there. A heavy sigh betrayed a sadness in parting from the place.

Our stint in Yavapai County hadn’t been terribly long, but I liked it. Uncharacteristically mild days for the time of year agreed with me, as did the expanse of the beautiful desert amid Ponderosa and the Granite Dells, big lumps of bedrock and large rippled boulders. Although it’s prudent to leave when you’re still having a good time, I wanted to do anything but.

Destination: New Mexico. A southern state not yet explored by us and sitting just above Mexico, I was sure it was filled with vast expanses of hot, arid desert, too barren to support anything noteworthy. Nope.

The weather blew a bracing wind for the most part while we meandered around a gamut of snow-capped mountains carpeted in pine and spruce. As we inched towards the white sands, we were met with towering cottonwood forests and colourful wildflowers beginning to bloom. Truth be told, there is nowhere else I’d ridden that reminded me of New Mexico.

Gloriously, the sky was cobalt blue and the air was crisp. Spring had sprung but so had an oil leak on Mr. Jangles, my DR650. A motorcycle trip wouldn’t carry much clout without one roadside repair. Or four, courtesy of Jason.

Sympathetic to our desire to press on, the mechanics at Las Cruces Motorsports immediately tended to the leak, which was more a niggling drip than a worrisome trickle. It turned out we were using ineffective sealant on my bike’s valve cover. Honda Bond, however, worked a charm.

Towards the north side of Route 70, about 16 miles southeast of Alamogordo, at the heart of the Tularosa Basin, glistening white dunes rise up from the earth. Unmissable but not immovable, they constantly shift and settle over the Chihuahuan Desert, engulfing 275 square miles of sparkle. White Sands National Monument is a colossal gypsum dune site, the world’s largest.

Firmer and cooler to the touch than you might think, the dunes make for boatloads of fun sledging down from up to 18m-high but, between us, hauling a rucksack spilling over with camera equipment and more dry bags strapped to me than I care to remember, we traipsed rather than tobogganed in. A mile later saw us set up camp in a secluded spot we’d call home for the next two days.

For thousands of years since the Permian Sea retreated, the shores of an ancient lake covered what is now White Sands. Over time, the elements have separated the water from the gypsum and formed transparent crystals. Once the wind and water were done, the crystals broke down into sand-sized particles. Strong south-westerlies keep the gypsum on the go, stockpiling it up and pushing dunes into incredible sandscapes, displacing wave-like dunes of all shapes and sizes.

The white sands reflected the light and, along with the midday sun’s atomic heat meant, as a redhead, I had to cling to the shade like a vampire. It was brutally warm. As if the sun was focused through a magnifying glass.

To gain a moment of refreshment, I washed myself with wet wipes like sanding down a wall. The afternoon grew hotter. I might as well have been on a salamander grill. Becoming increasingly aware of my fair skin’s ability to leave me with the complexion of Jabba the Hutt, I dived under mesh and canvas.

Looking out, the soft silence was periodically interrupted by the odd fighter jet, darting across the horizon as it blazed across a cloudless sky. Those would be from the White Sands Missile Range, surrounding the monument. While the sun began its slow descent, we hiked over the sandy banks when a series of them glommed together. Military aircraft long gone, the dunes were, I now realised, layered and daunting, impenetrable and comparable to nothing.

After a lovely swathe of afternoon approaching dusk, moments before the sun dipped below the dune field, Jason hollered at me to run towards the last vestige of golden light. With the utmost haste! Locating where the cat had put my tongue I said, “The dunes have changed colour. They’ve turned b-l-u-e!” stating the obvious to Jason as my head spun into the tungsten twilight.

This was radically different, the gypsum must absorb every colour of visible light except blue, so it reflects a pure powder blue back to us. Materialising as a winter-blue light mingling with the cold, I mused.

“I know, you should see the pictures coming straight out of the camera. No one will believe I haven’t tweaked the images.” I smiled and stood casually. There, with the great lilac hue taking over the place flaring like potassium in the low evening light, I just gawped. My brain roaring from all the colour.

Startled just as much by the scale and intricacy of the wind-blown rippled patterns. It felt like all the world’s pleasures were mine for the taking. This was a fine day. The good ones always sneak up unexpected.

Back to Las Cruces Motorcycle Sports saw the same honourable lads make a second attempt to seal up the returned leak. No matter, the resultant oil refused to dry up. Instead, it diminished to a glistening spot, which I, and more importantly, Jason could live with.

Splitting off Route 180, the City of Rocks rolled around to meet us. Located halfway between Silver City and Deming, it gets its name from a striking mile-wide geologic formation of volcanic rock. Over millennia, erosion has sculpted columns and pinnacles into a ‘city’ rising to 10m and separated by pathways.

As I rode along the lanes resembling city streets, I noticed nature’s infrastructure and failed miserably to imagine this place at its inception 40-million years ago. Still, a beautiful add-on in the Chihuahuan Desert region of southwestern New Mexico.

Sluggish with a happy fatigue induced by brisk days in the saddle and even colder nights camping in succession, we both craved something to shake us up. “How about a portion back on the dirt?” Jason suggested, pinpointing a section of New Mexico’s Backcountry Discovery Route. Famished for some off-road fun, proceedings kick-started on the Pueblo Park Road off the 180.

Enlivened, we cruised northwesterly of the Gila National Forest for 40 miles or so, twisting us around a serpentine course of compacted dirt some of the way. Tracks appeared more gravelly than rutty, and a little construction work grading the road was thrown in for good measure.

Swinging a right on an unnamed road brought us out onto Saddle Mountain Road and back onto the 180 towards Luna. It was thrilling, getting my dirt legs back was always exhilarating, even in rude temperatures just above zero. Adrenaline barely kept the burning cold at bay in my summer-gloved fingers but the dexterity of ‘feeling’ the bike trumps heated winter-gloved digits any day on dirt.

“Ooh, look at you, Lisa!” discerned Jason with boisterous good humour at my newfound capacity to slip straight back into ‘giving it some’. With that came a rare sense of self-satisfaction, as if I’d discovered that I was still capable of performing a forward roll. I’m sometimes a tangle of limbs with the grace of a three-legged dog before I straighten myself out and get on with it.

Once the muscle memory kicks in, I am always infinitely more willing and malleable. I’m happy Plasticine.

While the ride became finger-numbing, taking on the severity of a slow acid burn, my almost reckless swagger extinguished, at least the jaunt was anything but mind-numbing. On the contrary; awoken from a sleepy stupor, my blood pulsed gratifyingly.

It felt good and essential to my well-being. I was motivated by pure curiosity and a sense of play. It was just terrific fun. Optimism gone mad, I hooted my bicycle bell, apropos of nothing — Mr. Jangles charmingly sure of his place in the world.

At over 2,000m, a smattering of snow intersected our route dictating we push on. Particularly through tiny villages that were more of a gathering of buildings, if not struggling towns which continued to prevail because at some point long ago they set out to exist. For some time, we toyed with the idea of whether to take the stoic route and camp cheaply. Or, bed down in a cosy motel. Annoyingly, our sense of frugality bristles at any want or need for comfort at times.

The temperatures plummeted, and the smidgeon of flakes became a flurry. The prospect of solid walls became seductive, whatever the cost. I’d read somewhere that the great virtue of defeat, once accepted, is that it at least allows one to rest. No longer troubled by splurging a day’s budget on a bed alone, I outlined the reality of a warm and comfortable ending, to which Jason soon succumbed.

I dismounted the bike only to discover my knee joints had stiffened. My hips ached as if I’d hiked across a dune field with my body weight in dry bags hanging off me. Hurting, I hobbled into the office with a robot’s gait and vowed I wouldn’t return without a room key in my hand.

An evening of centrally heated warmth and subsisting on comfort food before I’d have to extricate myself. Sucking up electricity and WiFi like a free diver coming up for air. The prospect was blissful. It was transformative.

Engendered by several bowls of hot food, I soaked in a hot bath and had never enjoyed the sensation more. The place was aglow all around us, as though sharing our happiness. Lulled by the most wonderful, unshakeable feeling that comes from a springtime road trip to New Mexico.