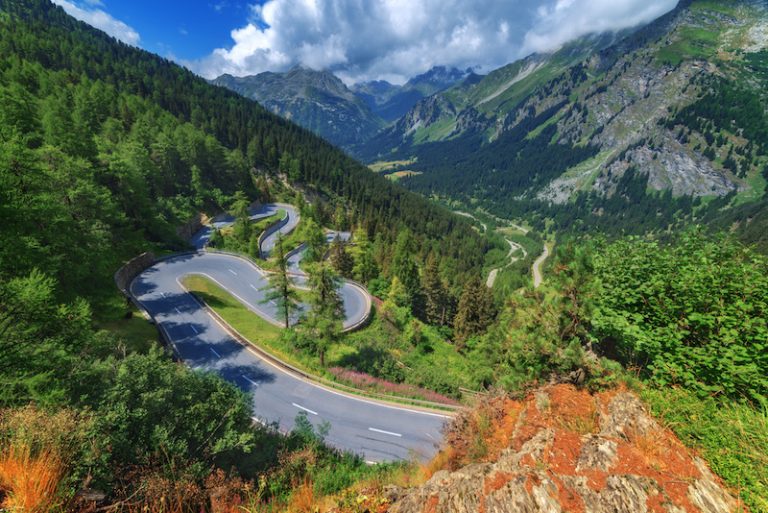 As a motorcyclist, it’s hard not to get excited by the mere mention of mountain passes. The combination of testing riding as you wrestle your machine around hairpin bends and sweeping curves, and jaw-dropping views just seem to go together so perfectly. And usually each pass has a nice cafe at the top that serves perfect coffee… Winner!

And you don’t have to travel too far to find world class mountain passes. Indeed, our home soil, the UK, plays host to a number of mighty fine mountain roads, but it’s the Alps of Europe that we’ve decided to focus on here, bringing you eight of the most exhilarating, scenic, enjoyable and down-right epic mountain passes in the mountain range. Enjoy. 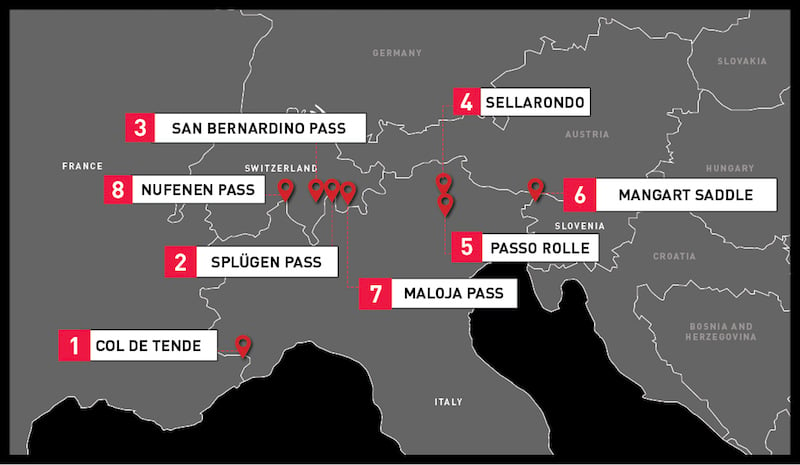 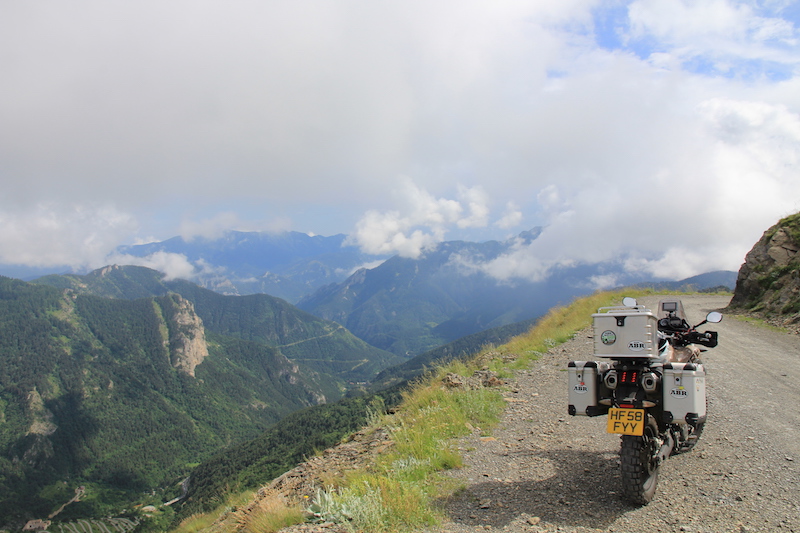 The Col de Tende is a 1,870m high mountain pass on the French Italian border that connects the city of Nice with the town of Cuneo in the Italian province of Piedmont.

The road is no longer frequently travelled as a tunnel through the mountain has since been built, but for the adventure bike rider, days could be spent exploring the networks of old military roads that can be accessed from the top of the Col. 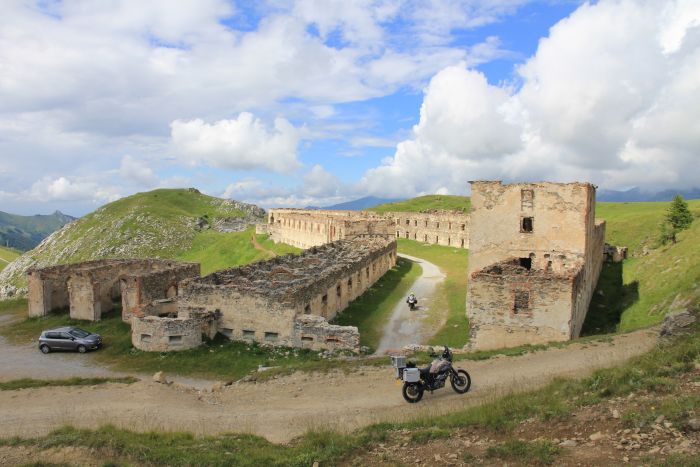 While disused, the road is easy to ride and, at the crest of the pass, you can take a detour to see one of the many abandoned forts which  litter the border. Riding through the heart of one of these abandoned structures is a surreal, but awesome experience. 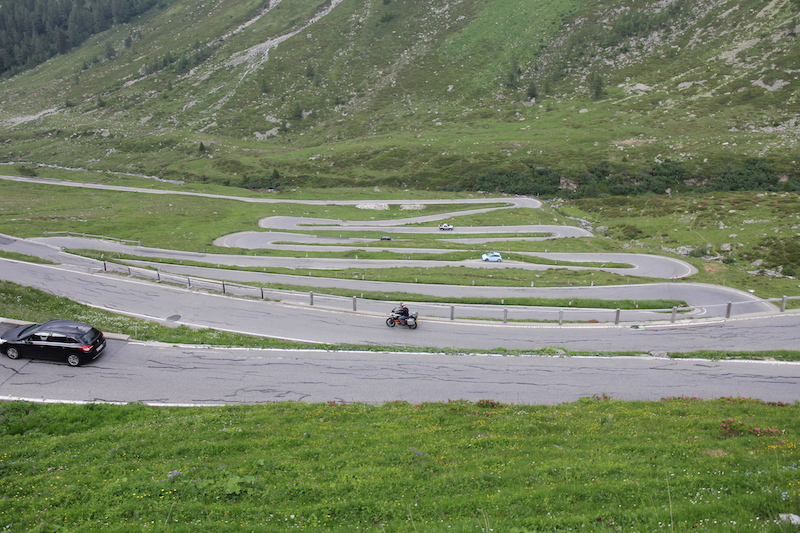 If you’re heading to the Alps this year, you just have to include this epic mountain pass in your itinerary. The road connects the Swiss Hinterrhein Valley with Valle Spluga in Italy, and it’s surely one of the craziest and enjoyable rides in the Alps. 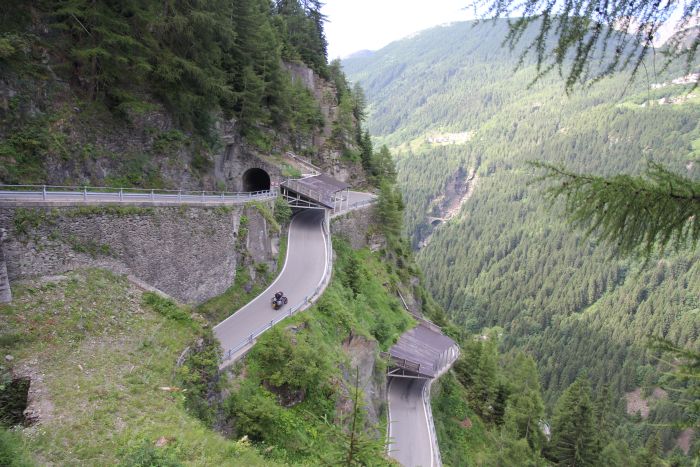 The Italian side of the Splügen Pass

The road on the Swiss side is characterised by a series of 10 back-to-back hairpin bends that appear out of nowhere, while the southern side is a testament to Italian engineering as the road ascends what should be impossibly steep terrain. If you’re after a thrill, then you’ll want to make sure the Splügen Pass is on your hit list this summer. 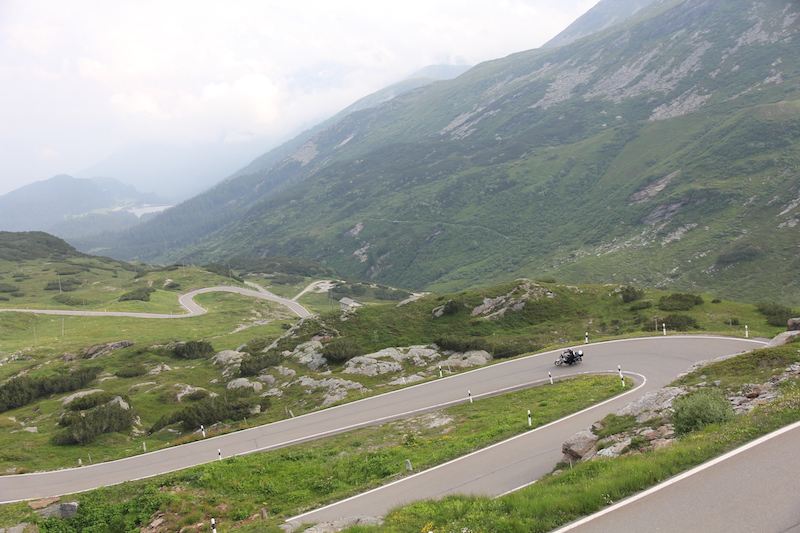 The San Bernardino Pass is the Jekyll and Hyde of Swiss mountain passes. It starts off as the A13 in Gorduno and whisks you in a northerly direction on a perfectly tarmacked road with beautiful, fast sweeping bends. As you climb higher the views get more incredible and the two-laned road becomes sensational.

As you reach the small village of San Bernardino resist the urge to continue on the A road, instead turn off to tackle the old route. If you thought the riding before was good, then you’ll be amazed by this section. Turn after turn you wind your way through the Swiss mountains before eventually dropping into Hinterrhein via a series of 17 hairpin bends. 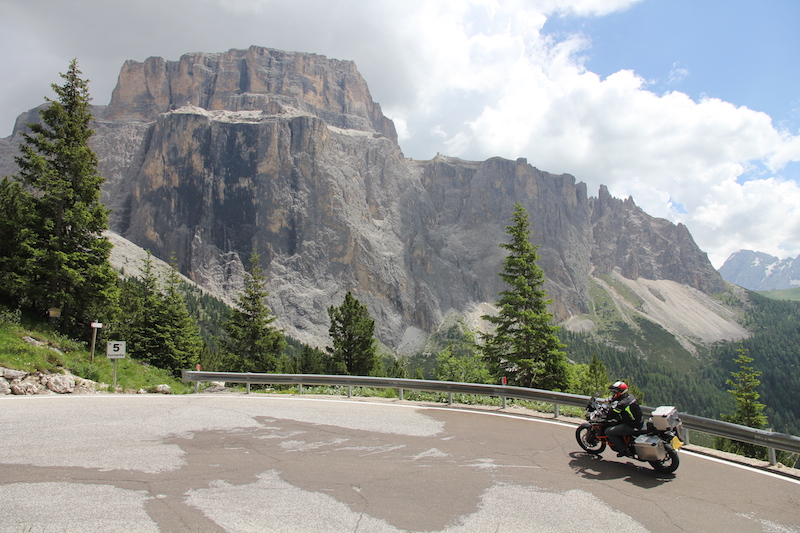 The Sellarondo isn’t one pass, but a series of four (Sella Pass, Campolongo Pass, Pordoi Pass and Gardena Pass) that takes you on a magnificent circuit of the mesmerising Sella Group in the Dolomites. The roads are well kept, though can become very crowded at peak times, so keep a keen eye out for tourist coaches coming wide around corners.

The four passes combined provide a 34-mile long route that’s one of the most picturesque you’ll find in Europe. Around every turn is a new sight that amazes you, and as you ride past the Sella Towers, your neck will strain as you struggle to keep one eye on the road and the other on these wonderful natural rock formations. 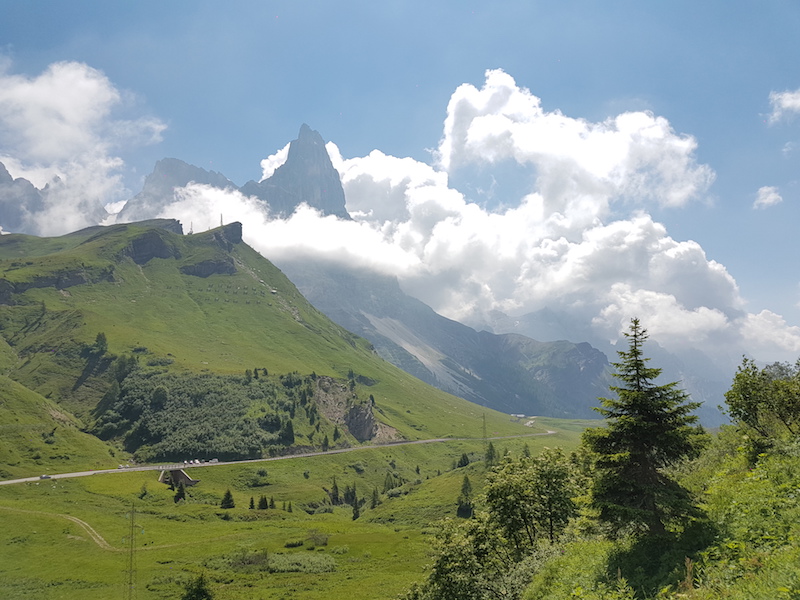 Views of Cimon della Pala from the summit of Passo Rolle

Passo Rolle is the second road in this list to be situated in the Dolomites, and as you might expect it’s not just the curves of the tarmac that make it such an incredible ride. As you reach the crest of the pass the towering peak of Cimon della Pala, the Matterhorn of the Dolomites, comes in to view and dominates the landscape.

It’s hard to take your eyes off the towering monolith, and as you continue down the southern side of the pass you ride right underneath the mountain’s imposing south west face, before diving into a series of exciting and rewarding turns. From Passo Rolle, it’s worth exploring the many other passes that the Dolomites have to offer.

>>>Related: 3 undiscovered mountain passes in the Dolomites you need to ride before you die 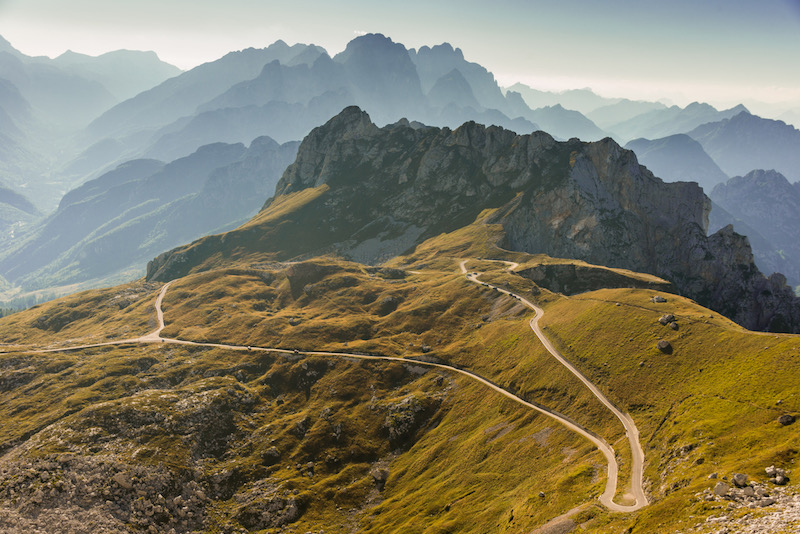 While the road up to the Mangart Saddle isn’t a mountain pass (you can’t go up one side and down the other), it’s worthy of a place on your 2017 bucket list. Located in Slovenia, just over the Italian border, the road takes you to an elevation of 2,055m, making it the country’s highest paved stretch of tarmac.

This epic route consists of numerous twists and turns as you snake your way up the side of Slovenia’s third highest mountain, Mt. Mangart (2,679m) in the Julian Alps. Once you reach the top spend a few moments in the car park and take in the sublime views of the mountains, valleys and lakes that stretch out around you. 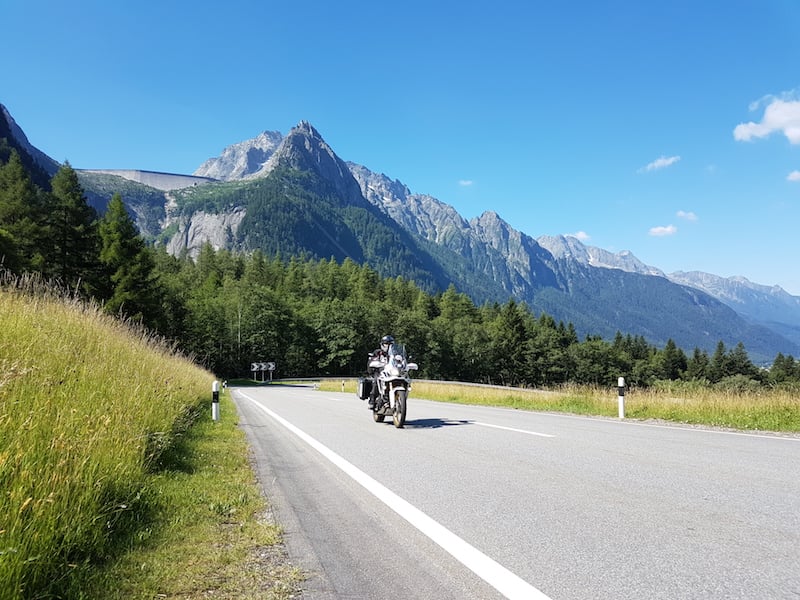 During the winter, the rich and famous will be sat on the slopes of St. Moritz sipping fine wines and shopping for diamonds. But give it a few months and the road up to the swanky ski resort becomes one of the best motorcycling roads in the Alps. As you set off from the Italian commune of Chiavenna, you soon realise that the Maloja Pass is the tarmac equivalent of Quentin Tarentino’s From Dusk till Dawn.

The road starts off sensibly enough, with perfectly laid tarmac shuttling you through a picturesque valley before it all gets a bit mental and rises sharply in the form of a series of steep, sharp and exciting bends. Give it a go, you won’t be disappointed. 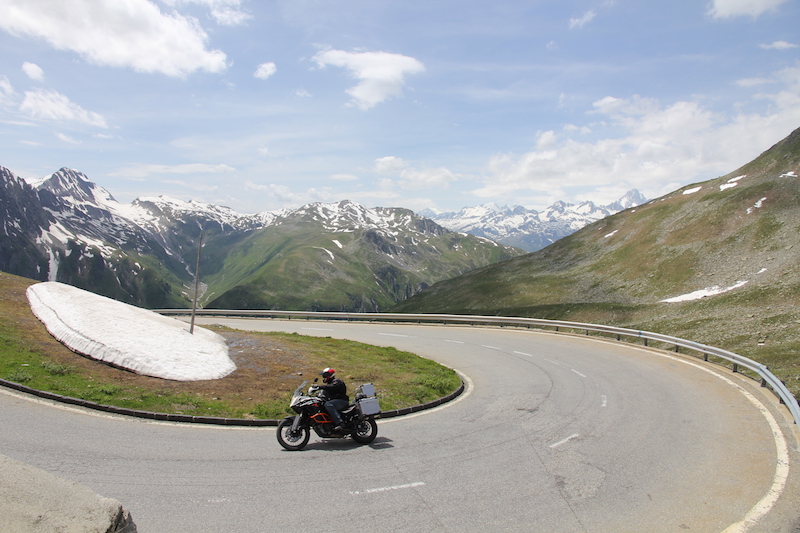 There are a number of mountain passes in Switzerland that attract bikers like moths to the flame. The Furka, Grimsel, Susten triangle being three of them. While I’d fully recommend riding these, just a few miles to the south lies a pass that’s just as exciting in its own way, the Nufenen Pass.

With a maximum height of 2,478m, the Nufenen Pass is the second highest paved pass in Switzerland, and the road offers fantastic riding through perfect Alpine scenery. Once you reach the top it’s well worth taking some time to look north and admire the striking view of the Bernese Alps, where you can see the iconic mountainscape of the Eiger, the Monch and the Jungfrau.