Riding to France on a 125cc adventure bike 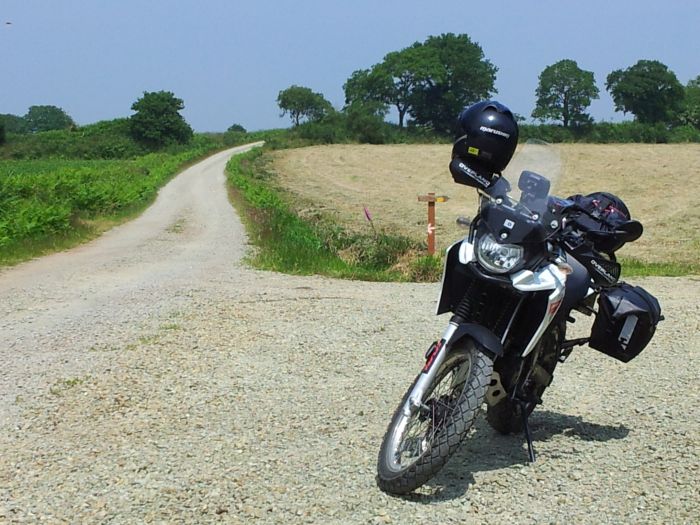 For many, the pathway into motorcycling is focused around achieving a full unrestricted licence in order to move onto riding bigger bikes with more oomph. But not everyone shares that view. Alex Richards rides a Derbi Terra and is more than happy with his 125cc. Here, he talks about the time he took his Derbi Terra on a journey to France..

ABR: Who are you?

ALEX RICHARDS: I’m Alex Richards, 40-something, and a carer.

ABR: Where do you live?

ABR: What do you ride?

AR: I live in London where there’s little point in having anything bigger than a 125cc, bike but I didn’t want the typical little learner bike. I’d seen Derbis when I lived in France and the whole Ewan and Charley image sucked me in.

ABR: What’s the furthest you’ve ridden on it?

AR: By adventure bike standards not that far, I’ve run across to see my folks in Brittany a few times, buzzed up to last year’s HUBBUK in Derbyshire but nothing major.  I guess the furthest done in a day was about 400 miles wandering round the B roads of Brittany.

ABR: How was that?

AR: Well, the Terra Adventure is a big bike with a small engine, so while you might not get anywhere fast you do get there in comfort. I’m never going to hoon round the country lanes at 100 but that’s not my style anyway. I much prefer to potter along at 50-60 and the Derbi’s happy doing that all day. 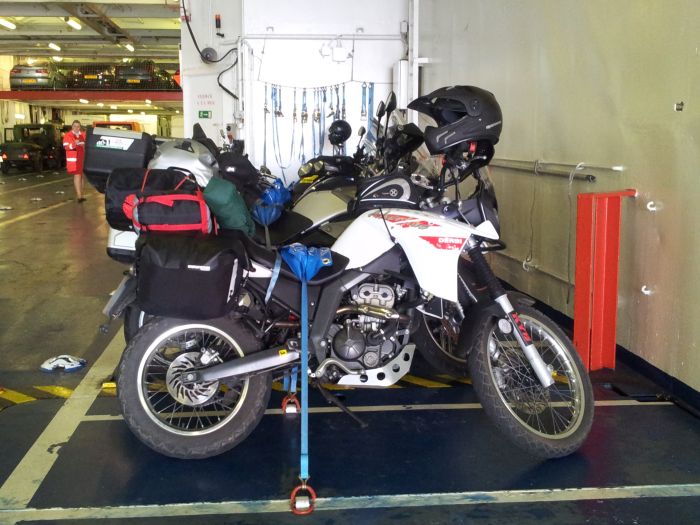 ABR: Where did you go in France?

AR: I lived in Brittany for thirteen years, but you know how it is when you live in a place you don’t make time to truly see it, so since I moved back to England I’ve been across two or three times a year, usually a couple of weeks each trip. I’m lucky my parents still live there so I’ve got a place to stay.

ABR: How many miles did you cover a day?

AR: I tend to do loops out from my parents with a mix of B-roads and farm tracks if I can. Sometimes I might never get more than 20 miles from home, but I can still cover 100-150 miles a day. Brittany is great like that there’s so many little side roads to explore.

ABR: On your own or as part of a group?

AR: On my own. I’d like to take my wife too but she’s a wheelchair user, so until we get a Ural outfit she’s stuck at home.

ABR: How did you navigate?

AR: I’ve got a GPS, a Garmin 350LM which is fine for road work but not made for off-roading. I much prefer maps anyway and a set of IGN maps for the region reveals hundreds of miles of “chemin d’exploitation” or farm tracks; usually a mix of gravel and sand, but sometimes pure mud. I’ll set the GPS to find the junction between road and track, but after that I pretty much just see what happens. The Garmin can always get me home if I get lost.

ABR: Did you find it too small for touring?

AR: No not really. She’ll sit on 65-70 all day loaded up with panniers and roll bag. Where I lose speed is long hills and headwinds. I find the trick is to treat those times as a chance to slow down, have a wiggle and a stretch. But like I said, the Terra Adventure isn’t a small bike, it just has a small engine. 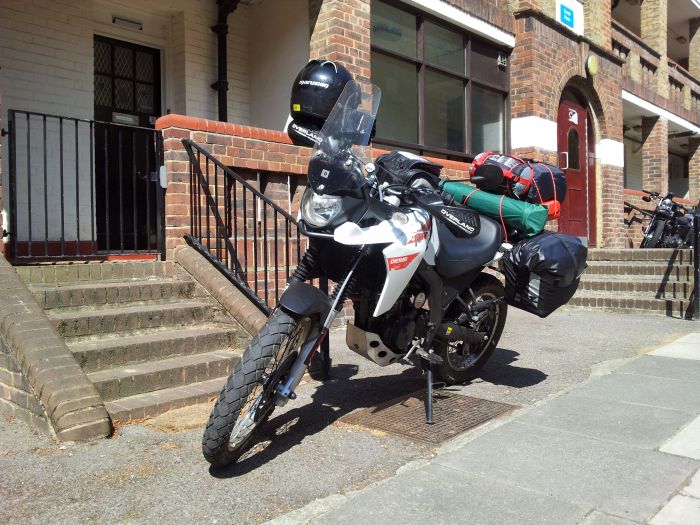 ABR: What were the good things about touring on such a small bike?

AR: Fuel economy for a start. I can get door to door, mine to my parents on two gallons of fuel. That’s 180 miles, not counting the overnight Portsmouth to St Mâlo ferry of course. I spend more time seeing stuff as well. Anyone can ride slowly of course, but when your top speed is the national limit and your bike’s happier below that you tend to take things slower and see more. Plus, when off-roading I know that if the worst happens and I drop it I’m not going to get a hernia picking her up.

ABR: Any problems with it?

AR: Touchwood, aside from a mystery starting problem, no. Derbis do seem to suffer a bit from electrics built for the Spanish climate and the OEM wheel bearings are made of cheese, failing at 2.5-3.5k. Luckily they’re a common size so everyone replaces them. I run the Facebook owner’s page and it’s the first thing new members get told about.

ABR: Why don’t we see more Derbi’s on the road?

AR: I don’t know, you see plenty of them, especially their 50cc trail bikes and supermotos, all over Europe. I guess Piaggio UK (the parent company) didn’t advertise at all so no one knew. I certainly wouldn’t have if I hadn’t seen them in France. That’s why there are only just over 100 Derbi Terras in the UK.

ABR: Why haven’t you upgraded to a ‘proper’ bike yet?

AR: I don’t see a 125 as being any less of a proper bike than any other cc. No one asks a 1.1-litre Nissan Micra owner why they don’t drive a proper car like a 3.5 litre BMW. It’s horses for courses and the Derbi suits me. Occasionally I wish it was a 250cc for that little bit more torque, but no one makes anything like the Derbi until you get to the 650 BMWs or 660 Ténèré. 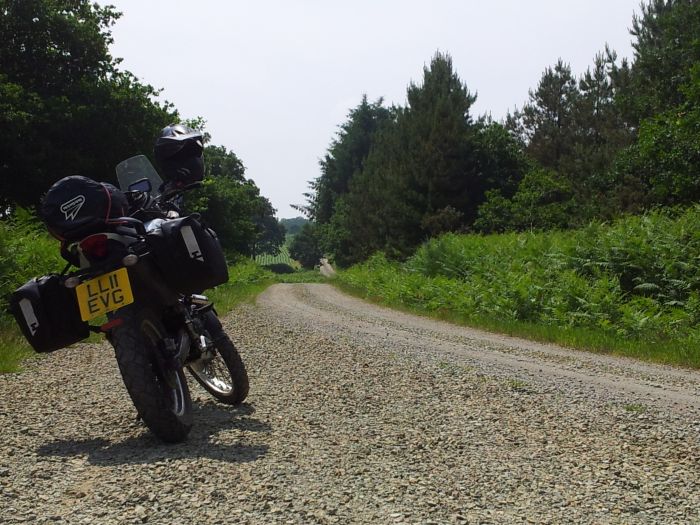 ABR: Any advice for anyone wanting to get in to biking?

AR: It can all seem a bit daunting and if you plunge straight in with Direct Access it’s very expensive too. Don’t be put off by anyone who says a 125cc is too small, find a bike you like that makes you smile when you look at it, like the Derbi does me, do your CBT and ride. You can always do a test and get a bigger bike later if you must.

ABR: And why don’t you think more people are getting in to biking?

AR: It’s expensive for what it is. By the time you factor in a bike, the gear, the insurance, the lessons and the two part test you can buy a car. And if you’re a 17-year-old relying on the bank of mum and dad you’ll find for the most part parents would rather spend the cash on getting you skilled to drive a car than getting you on a bike, which is often seen as a bit of a hobby. That’s why the bikes have all got forty-somethings on them; we can finally ignore our parents!

And bikes just aren’t that accessible anymore. what with dealers stuck down side streets, no advertising anywhere outside the biking press and a confusion of regulation.

ABR: What the biking industry needs is a radical shake up in how it deals with the public. Without it there risks being few young bikers.

AR: It’s all a bit strange considering all the clothing and imagery of biking which is currently incredibly cool with high streets full of Belstaffs and Barbours. The only thing that doesn’t seem cool is the actual riding.