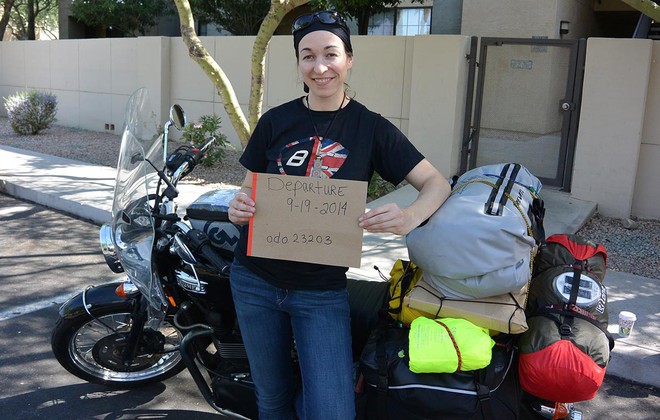 Lynn spent just under a year on the road riding through all 48 of the continental United States having set off on 19 September 2014. Her journey came to an end on 29 August 2015.

She completed the journey on a 2006 Triumph Bonneville that she bought second hand with 20,000 miles on the clock.

Lynn actually rode for 53,000 miles through all 50 states and part of Canada, however Guinness are not able to count the entire mileage as the motorcycle is not allowed to be transported via boat, plane or another form of transport and it can’t enter another country.

Duplicate miles are also not able to be included in the record meaning each of the 48,600 miles she travelled were done so via different routes.

Still, she pretty much obliterated the previous record which stood at 23,760 miles and was held by Manigandan Manjunathan of India.

Remarkably, Lynn had only been riding for four years before setting off on this epic journey and her previous experience came in the saddle of a 1981 Yamaha Virago. Good effort.

To find out more about Lynn or her journey check out her Facebook page or head to her blog by clicking here.