Will we see a 170BHP Ducati Multistrada in mid October? 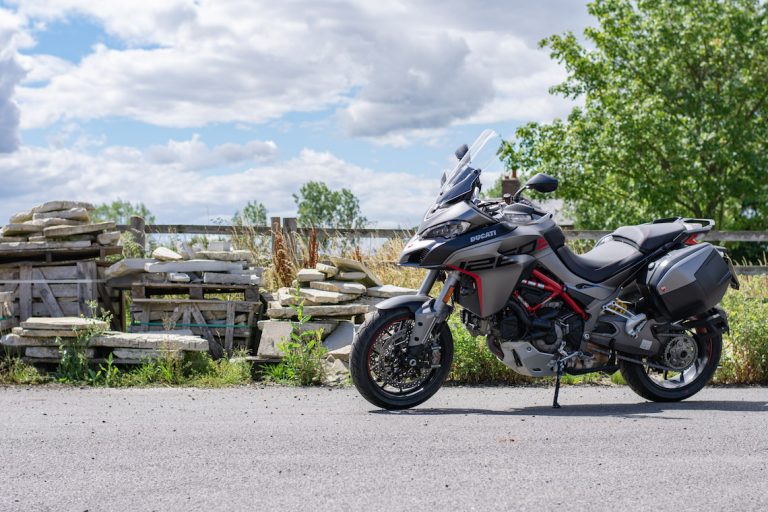 A new four-cylinder Ducati Multistrada, boasting a whopping 170bhp, will be the most powerful adventure bike on the planet when it is unveiled on 4 November.

The Bologna-based manufacturer has been teasing us with a series of cryptic social media posts highlighting the development of a four-cylinder engine, while spy shots from Ducati’s testing ground make it odds on that the first bike featuring the engine will be a brand-new Multistrada.

4 is lighter than 2.
It can also be more compact.
October 15. Be ready to #ChangeParadigmhttps://t.co/hYosOf3zBT pic.twitter.com/KJhZgphqov

The social media posts link to a webpage highlighting vital statistics behind Ducati’s new engine. It will be 1.2kg lighter than the two-cylinder V2 currently found in the Multistrada 1260, and it will produce an eye-watering 170bhp. We can expect two more announcements teasing more details over the next few days, before the engine is fully unveiled on 15 October. The Multistrada V4 will then be revealed on 4 November.

Having spent the last few months riding the Ducati Multistrada 1260 S Grand Tour, which produces 158bhp, the prospect of even more power has the entire ABR team very excited indeed. However, we’re also a little apprehensive that the smooth power delivery generally associated with a four-cylinder engine may take away from the character created by the throbbing vibrations of the current V2 engine. Only time will tell.

But what do you think about the prospect of a four-cylinder, 170bhp adventure bike? Will it result in road touring heaven or total overkill. Let us know in the comments section below.