Who’s legally at fault if you come off your motorbike due to snow and ice? 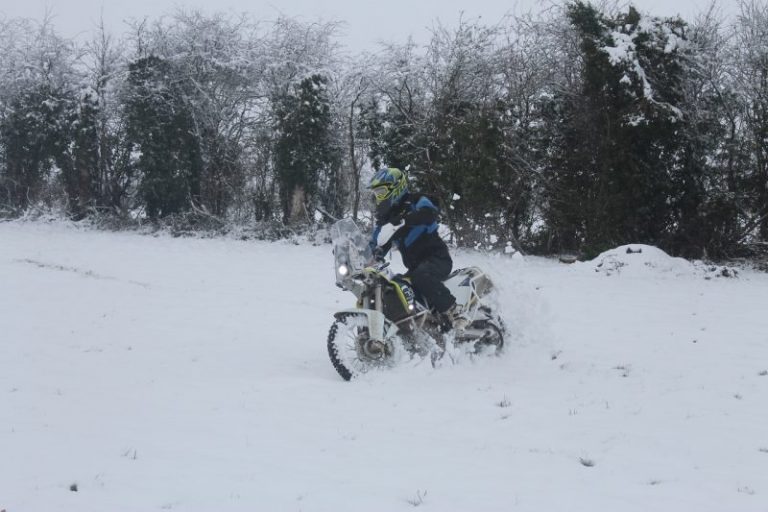 If you come off your motorbike due to ice on the roads, who’s at fault? Andrew Dalton explains the laws behind council responsibilities for gritting highways…

For our Scottish readers, your law is different so this is aimed at English and Welsh motorbike riders. The Scot’s law on ice on the road is, as I understand, fairer on the road user, but it is very dangerous for me as an English lawyer to start dabbling in Scottish cases.

If you take a road motorbike out in icy conditions, you are either some kind of riding god, or are mental. I do, however, appreciate the readers of ABR are more likely to be taking their motorbikes out on the lanes in ice, because knobbly tyres along the lanes work perfectly well. I will admit to having taken my dirt bikes out in fairly deep snow, and had an enjoyable, but a freezing cold couple of hours. That’s me (above) on my Husqvarna 701 in December 2017’s ‘snowmaggeddon’.

Following a landmark House of Lords decision (Good v Sussex 2000), Parliament reinstated the duty on Highways Authorities to control and manage ice and snow on the roads. This means councils must ensure, so far as is reasonably practicable, that safe passage along the highways is not endangered by ice or snow.
The form of words is really important. If you come off in icy conditions, the Council must prove that it has made reasonable efforts to keep the roads free from ice. If you fall off your motorbike on a byway because of snow and ice, the Highway Authority has no duty to maintain those because they are roads along which vehicular traffic does not customarily pass. The Council must have reasonable plans to keep highways passable in ice and snow, but the further you fall down the highways hierarchy the lower the duty becomes (a motorway is a different proposition to an A road which is different to a B road etc.).

In a nutshell, if you slide on ice on blacktop roads, you must prove that it was ice on the road that caused you to slide. This is not especially difficult to do, particularly if you are not badly injured. A smart phone picture is usually pretty good evidence. Photographs showing thick frost on the road, the Police report describing the condition of the road, or witnesses saying that the road was icy will all discharge this burden. That is the easy bit. The Council then has to prove that it took reasonable steps to keep the roads safe, which means producing their cold weather plan and showing that they had a system in place to deal with ice and, most importantly, whether the road on which you fell was part of the gritting plan, or if it wasn’t, why wasn’t it, and was there good reason why it wasn’t.

Judges are, in my experience, usually pretty sympathetic to overstretched Highways Authorities. The court system has been cut just as hard as local authorities, and judges are aware that there is not a great deal of money to go around. There is no defence in law to say, “we as a Council did not have enough money to grit the roads, so we did not grit them”. All the Judge has to decide is whether or not the plans for gritting the road were reasonable, and if those reasonable plans were carried out. There will usually be a well-documented plan as to what to do when the ice warnings go out from the Met Office. It does not have to be perfect, not every road has to be gritted, and if there is thaw and refreeze, following a reasonable attempt at managing ice on the roads, the local authority will not be found liable.

My own track record in running these cases shows how difficult they are. I have taken three since the 2000 law change, I won one, and that was on a technicality. The Highways Authority could not produce the man who drove the gritter, so could not prove the A road had been gritted, and the injured motorcyclist was pretty close to the dream claimant; a man of mature years who was a highly trained and professional motorcyclist, who came across excellently in court. The other two I pulled once the ‘ice plans’ were sent to me. It seemed that they were reasonable, and whilst they failed, I took the view that we were going to lose at trial.

As a simple rule of thumb, if you insist on riding your motorbike in sub-zero temperatures and you come off, running your case against the council for failure to ice the road is not easy, and councils know that the courts start from a position of sympathy to them. The higher up the ‘hierarchy’ the road is, the easier your case becomes. Running a case on a trunk road for a failure to manage ice is a whole lot easier than a minor road. Reasonable does not mean perfect, and the law is very slow to impose absolute duties. The presence of ice is not proof of an unreasonable system.