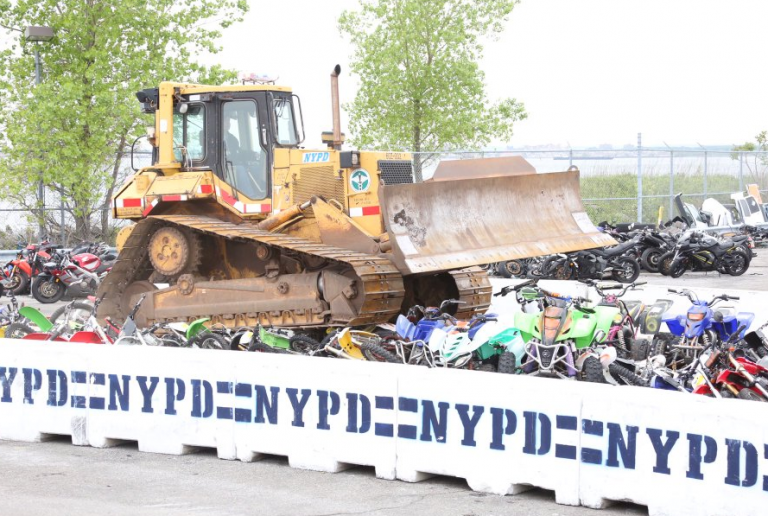 In an effort to deter the people of New York City from riding dirtbikes on the city’s streets, the New York Police Department decided to crush a few hundred confiscated motorcycles and broadcast the event live on Facebook. The demolition was intended to send a ‘very strong message to the nitwits and knuckleheads’ who ride their dirtbikes around the city, an act which is illegal.

NYPD Commissioner, Bill Bratton, made the promise last month that he would broadcast the bike-smashing live on Facebook as a way to deter those who are considering taking to the streets on their illegal machines.

And he made good on his promise this week as he broadcast the bike execution live to the world. The video starts off with Bratton strolling down the line of confiscated bikes before waving a chequered flag to signal the start of the crushing. Two bulldozers then roll into shot, painfully and slowly crushing the line of colourful dirtbikes and all terrain vehicles.

“We want to send out a very strong message to the nitwits and knuckleheads who insist on operating these illegal vehicles on the streets, sidewalks, parks, and housing developments of the city of New York, creating extraordinary danger not only for themselves but more importantly the public,” said Bratton after watching the vehicles meet their end.

“They are illegal. They cannot be registered to use anywhere in the city of New York. And thus, they’re now in the junk heap in back of us,” he said, adding that last year, motorcycles and quad bikes caused five deaths in the city.

Viewers on the NYPD’s Facebook page were less than impressed though, pointing out the wastefulness of the act.

“Dear Mayor Bill de Blasio and NYPD, this is a waste of my taxpayer dollars! This is wrong at all levels,” commented Joao Francisco.

“There are 15 Motorcycle Technician schools in the state of New York that could have used donations of these bikes. What is done in this video is as stupid as the people caught riding them on the street. What a waste of time and money,” pointed out Jacob Effinger.

Not everyone was critical of the show of force though, with one Facebook user commenting: “It was done to show that this nonsense won’t be tolerated, people are saying to auction them off, in doing that they wind up back on the streets and the whole process starts all over again. Use your heads and think, these annoying toys don’t belong in a city, they are meant to be used in the country away from people.”