If you’re reading this, chances are two-wheels is your preffered method of travel. And with the progression of the adventure motorcycling industry, there are now loads of capable bikes that are able to take you across all manner of terrain.

But, there are also those who, whether you think it’s blasphemy or not, choose not to take on such mammoth journeys in the saddle and instead opt for four wheels instead of two. The question is, which copes better?

Well, that’s exactly what the guys at production company Motology Films wanted to find out. So they took two KTM 300EXCs and a Mitsubishi Triton pickup truck on a 7,200km (4,473 miles) adventure from Perth to the Kimberley region in Western Australia.

Filmed by and starring filmmaker and dirt bike rider Adam Riemann and his friend Louis Calvin, the video sees the duo compare the two vehicles Top Gear style as they pass through a vast variety of terrain.

Expect stunning cinematography, some great riding/driving and a sudden urge to head out to Australia on an adventure of your own.

Talking about the inspiration for the video on his blog, Adam wrote: “What if I wanted to grab a mate and take our KTM 300EXC race bikes on a monumental outback adventure?

“I know it would totally suck spending that much time buzzing along a bitumen highway on our two-strokes, and they’d need so much extra fuel stowed on board that they’d handle like over-burdened donkeys anyway. 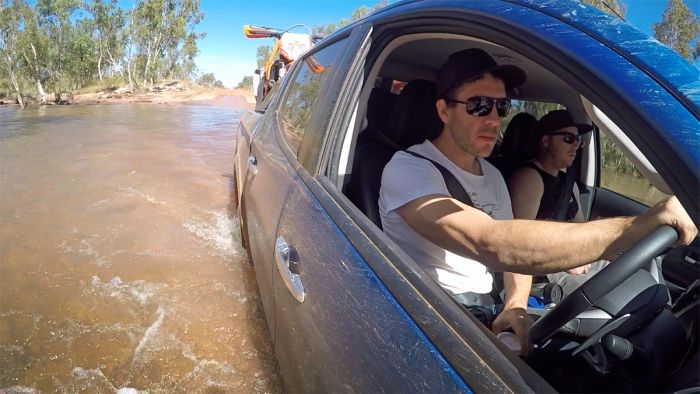 “So, it got me thinking – load the bikes onto a vehicle capable of carrying them into some remote, epic landscape. A place so far from our usual moto habitat, a place where two-stroke motorcycles simply do not go… The Kimberley region!”

Along the way, the pair dealt with window-deep river crossings, limited fuel stations and rocks that simply obliterate tyres. But which would cope best, the bikes or the pickup?

Now, we know what you’re thinking, if they were on an out-and-out adventure bike, say the Honda Africa Twin or the BMW R1200GSA, perhaps the outcome of each segment would have been different. Probably, but it’s still an awesome video that is well worth the watch!

Let us know what you think of Adam and Louis’ thoughts and whether you agree with the points they make by getting in touch on Facebook, Twitter or in the comments below.