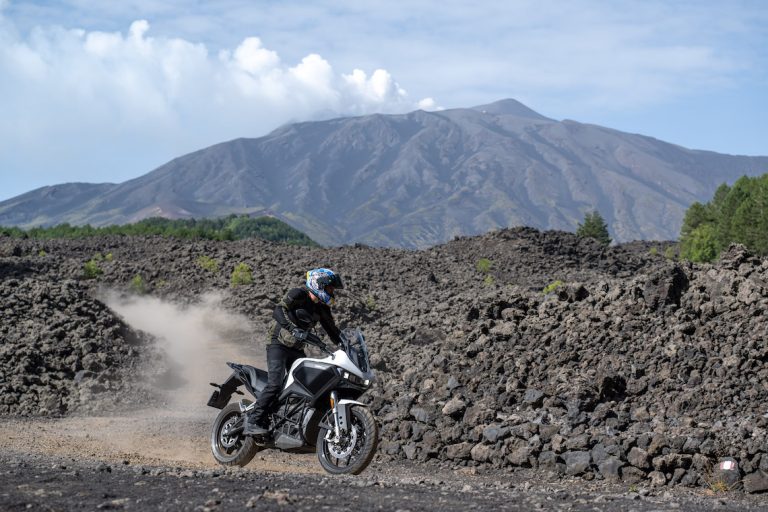 Electric motorbikes are on the precipice of being a genuine reality for adventure riders, but are they there yet? ABR went to Sicily to test Zero’s latest entry in the electric motorcycle market.

The scene is Mount Etna. Located on the east coast of Sicily, it’s one of the world’s most active volcanoes. An empty road twists itself through the ever-changing landscape, struggling to hold on against the forces of nature.

Then, a silent flash darts around the corner, slides through the bend, and is gone. That was the herald of the future racing laps around the Earth’s most ancient of wonders. That was the Zero DSR/X. Here’s a sneak peek of our review, which you can read in the November/December issue of Adventure Bike Rider magazine.

No bark, all bite 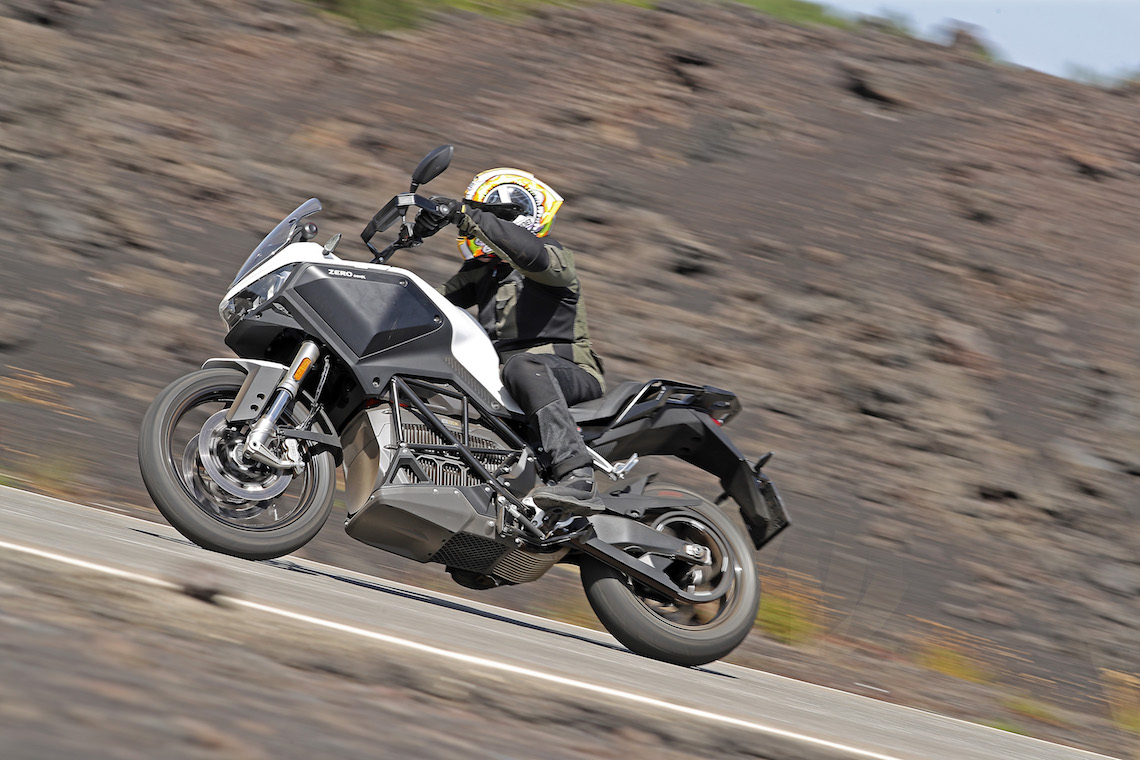 One of the most exciting features about electric motorbikes is the lack of delay between twisting the throttle and torque being transferred to the wheels. One second, you’re stopped at a traffic light, the next, you’re gone.

The DSR/X produces a hair-raising 225Nm of torque in peak power mode. In comparison, a BMW R 1250 GS musters a comparatively measly 143Nm at 7,750 rpm. This puts the acceleration of the Zero DSR/X more in line with a sports superbike than a typical adventure bike and makes for a seriously fun ride. 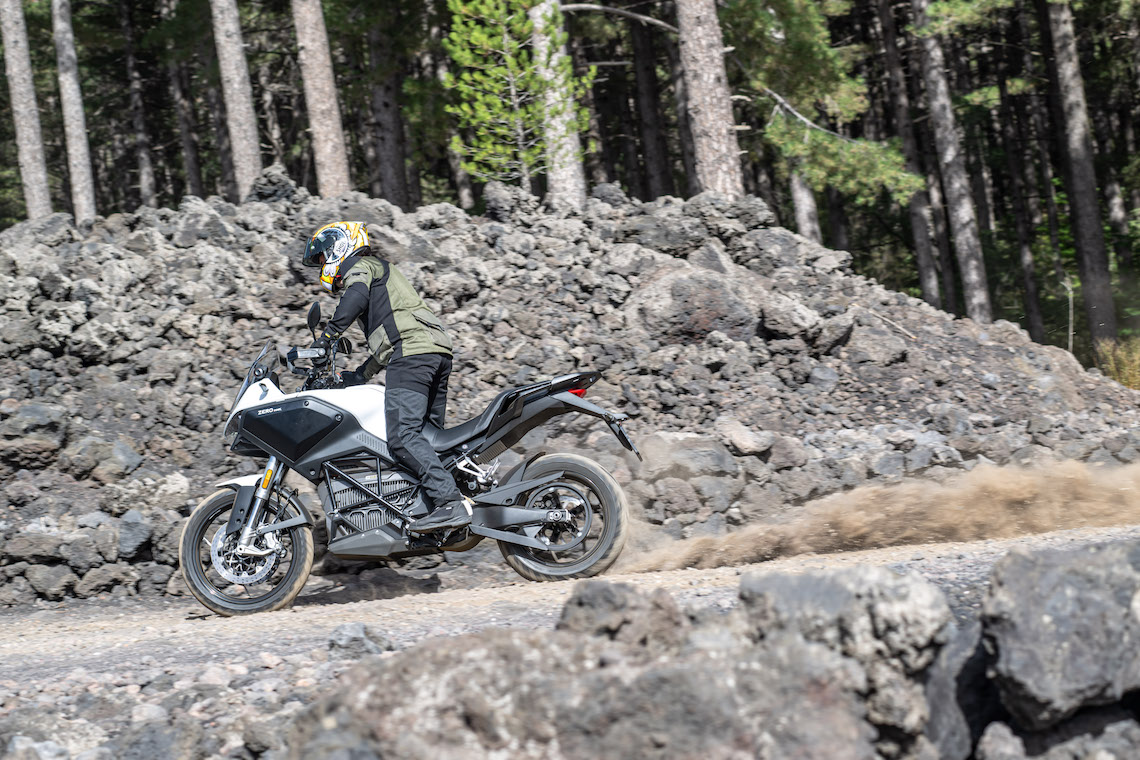 The DSR/X is made for effortless riding: no gears to shift, no noise, no heat, no fluids to change. Zero have also partnered with Bosch to beef up the electronic safety features on the DSR/X, including lean-sensitive traction and control and ABS as standard.

It’s true that the growl of an engine at full revs will be missed among dedicated petrolheads. But for those who want something that’s easy to maintain and won’t cause a fuss amongst the window-watchers in the neighbourhood, an electric motorcycle might be right for you. 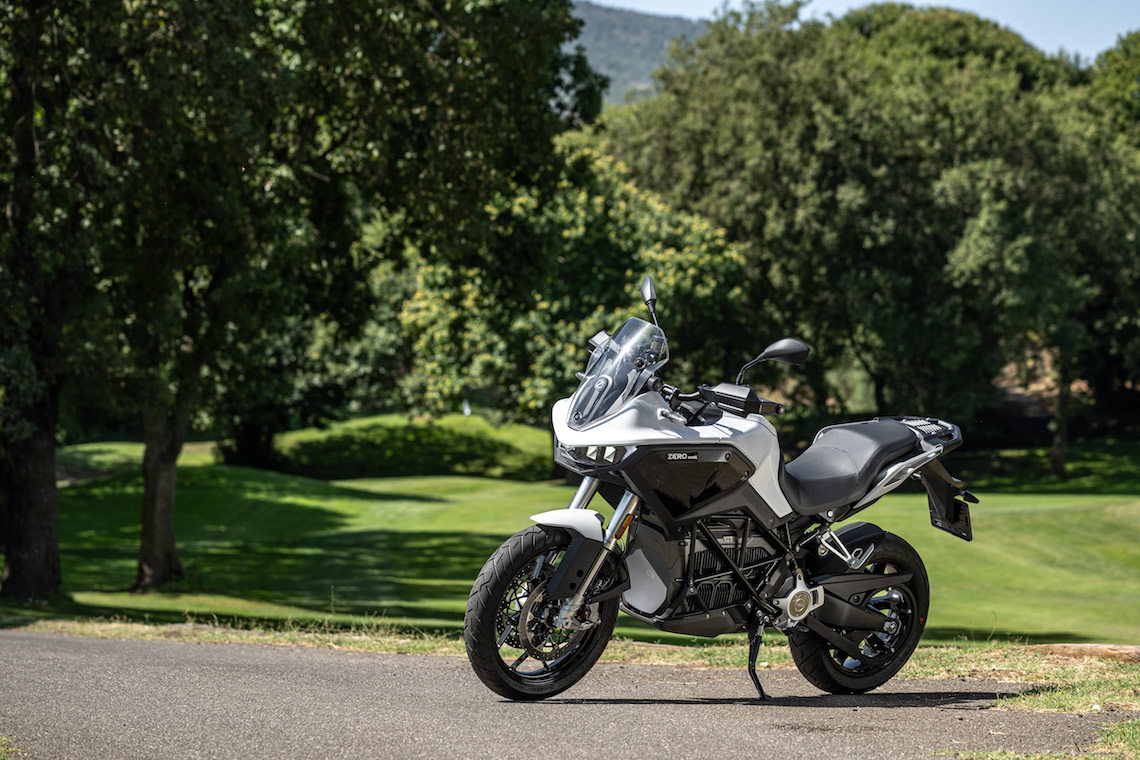 I really like the way the DSR/X looks. I’m not usually a huge fan of ultra-sleek modern motorbike bodies, but there’s something about the fighter-jet lines on the DSR/X that really catch my eye. The menacing headlight array seamlessly blends into the bodywork, and the heatsink incased in the frame give the bike a futuristic but recognisable appearance.

It’s not over the top, but it doesn’t look like a toy either. It looks like it means business. It’s not quite the classic adventure bike look; but like the rest of this bike, it forges its own identity.

What about the range? 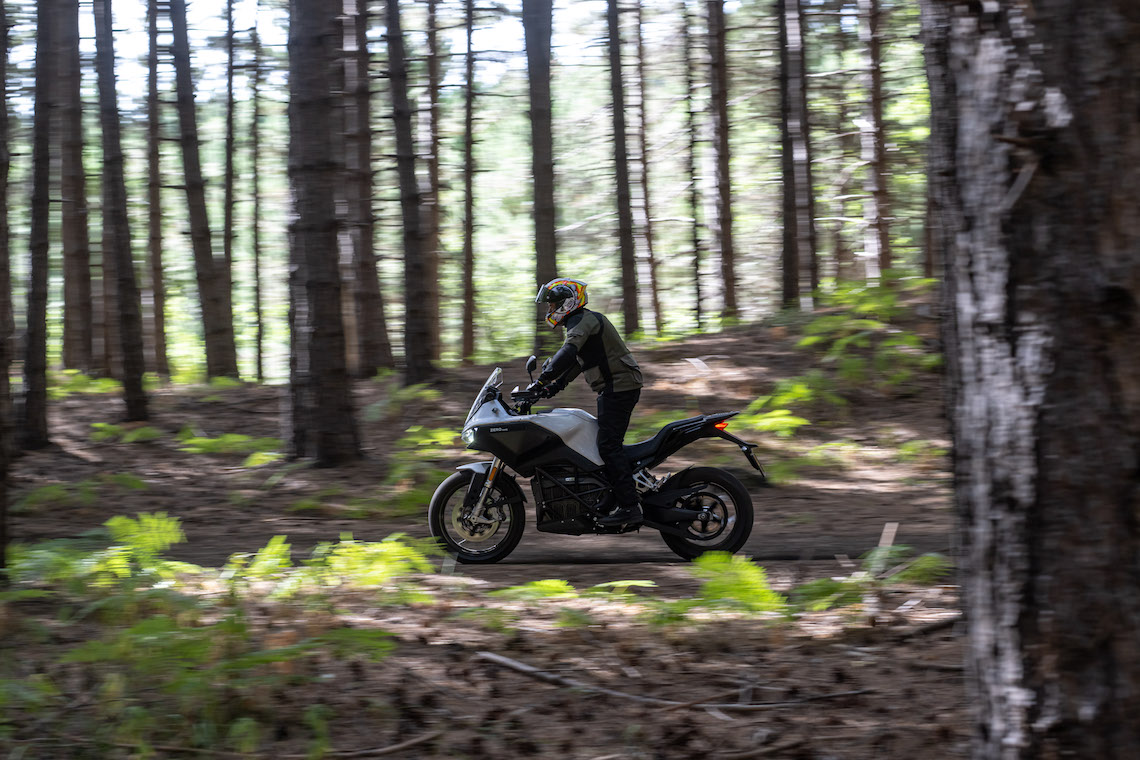 No, I’m not ignoring you. I know you’re asking about the range. And yes, it’s not as capable in this respect as an adventure bike with an internal combustion engine. If you want to ride across Mongolia or the length of South America, then it’s absolutely not going to cut it.

However, the quoted range of 115 miles of combined highway and city riding means it’s well suited to being a commuter, while still having enough juice for a green lane detour.

That being said, Zero claims that you can squeeze out 220 miles of casual off-road riding with the Power Tank optional extra (£2,899), so adventure riding is not totally out of the question. After all, the first drivers at the start of last century had to grapple with a lack of range and infrastructure too. Now, it’s time again for the pioneers to rise up again and prove what these bikes can do.

All the comforts you’d expect 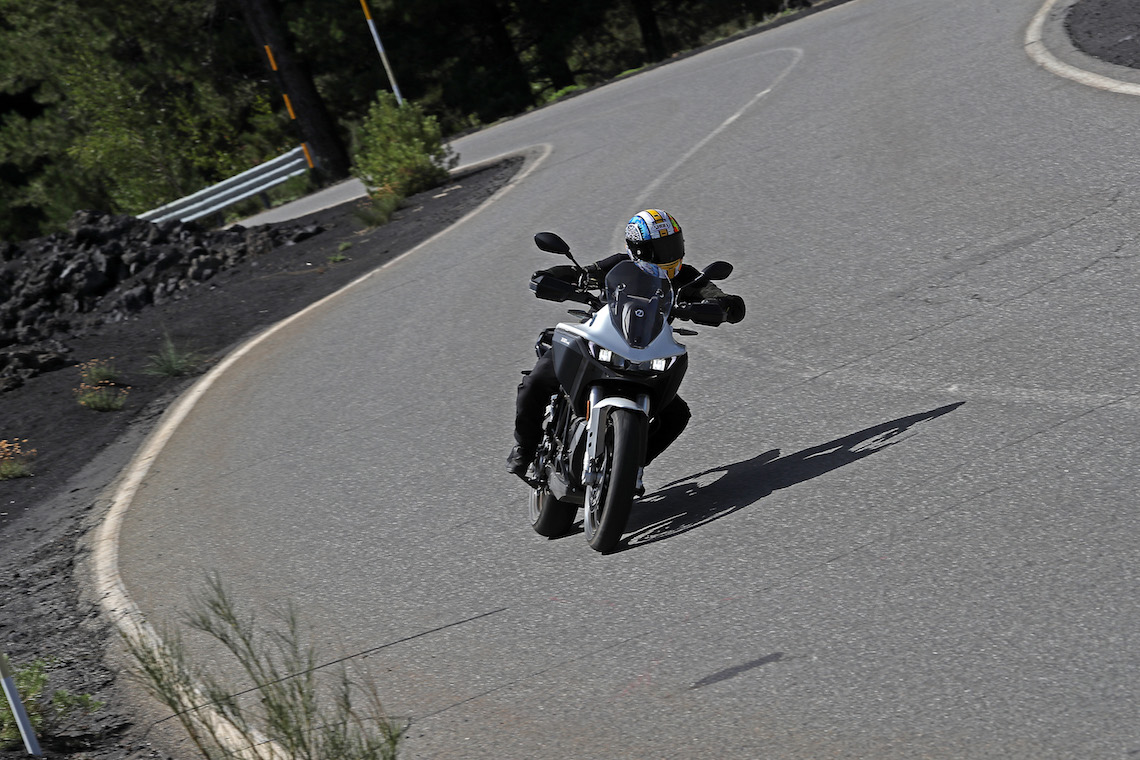 The DSR/X has been thoughtfully built. It’s adorned with quality Showa suspension components and J-Juan brakes that are made to handle the 247kg bike. Add in Bosch rider aids and a comfortable riding position, all make for a handling experience that can tango with the best adventure bikes on the market.

Zero has also included riding modes which change the behaviour of the bike. For example, selecting Eco mode limits the maximum power output to save charge,, while Canyon mode unleashes the bike’s full output, meanwhile configuring the throttle response to give you a smooth surge of acceleration.

Another handy inclusion is regenerative braking, which mimics conventional engine braking while also recharging the battery. All in all, the handling package is well considered, and suits the needs of an adventure rider nicely.

Is it worth it?

You have to hand it to Zero. The dedication to build such a capable electric motorbike despite the limitations of current battery technology is commendable.

The DSR/X has some fantastic features, and we can see it carving out a niche within the adventure bike market. You can read our full review and final verdict in the November/December of ABR magazine. Until then, head over to Zero’s website here to check the bike out for yourself.