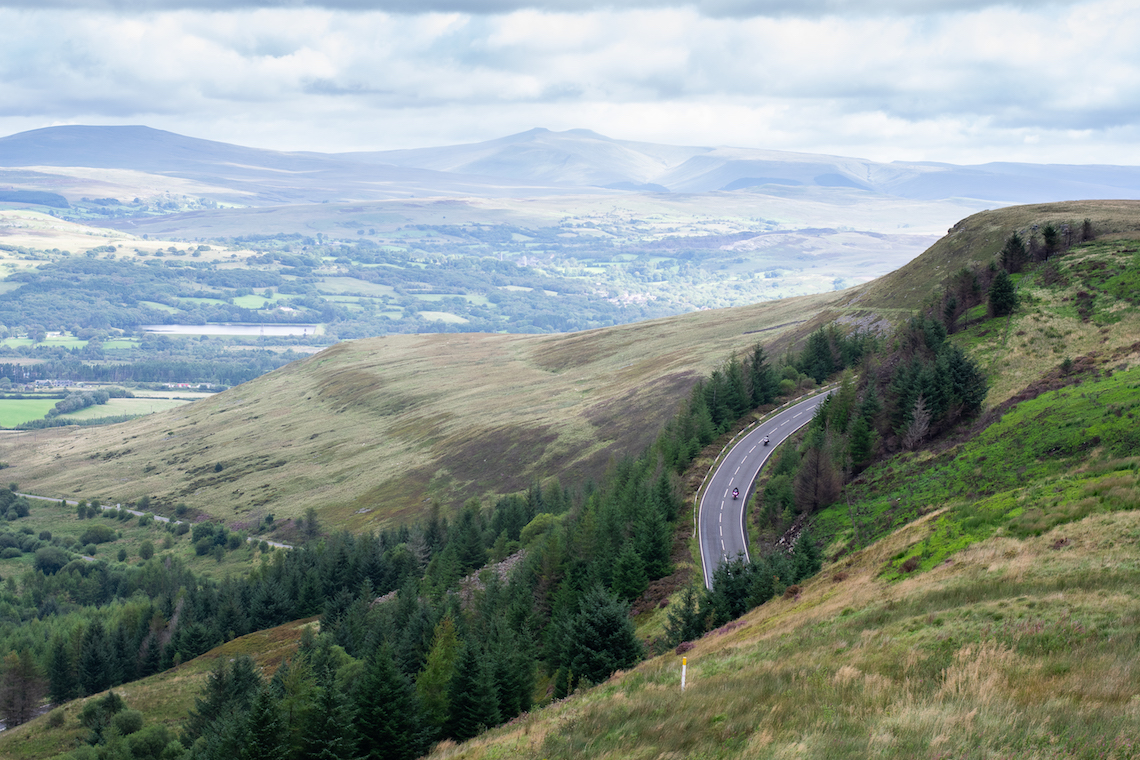 Ollie Rooke takes on the ABR Welsh Super 10 challenge to ride the country’s 10 highest mountain roads, which all stand at over 500m tall, in 24 hours.

While Adventure Bike Rider is based in the Midlands, there’s no denying that its soul lies further west in Wales. Not only is it the birthplace of ABR Founder and Publisher Alun Davies, but it’s home to some of the best UK riding an adventure biker could hope to discover.

A rugged coastline gives way to a vast mountainous landscape that stretches as far as the eye can see, while long, meandering roads wiggle across stunning scenery following the contours of the hills and valleys.

For motorcyclists looking to explore the world on two wheels, these ribbons of tarmac offer a perfect mix of road riding at its best, offering sweeping bends that give way to tight single-track lanes, before climbing to lofty heights along mountain passes. 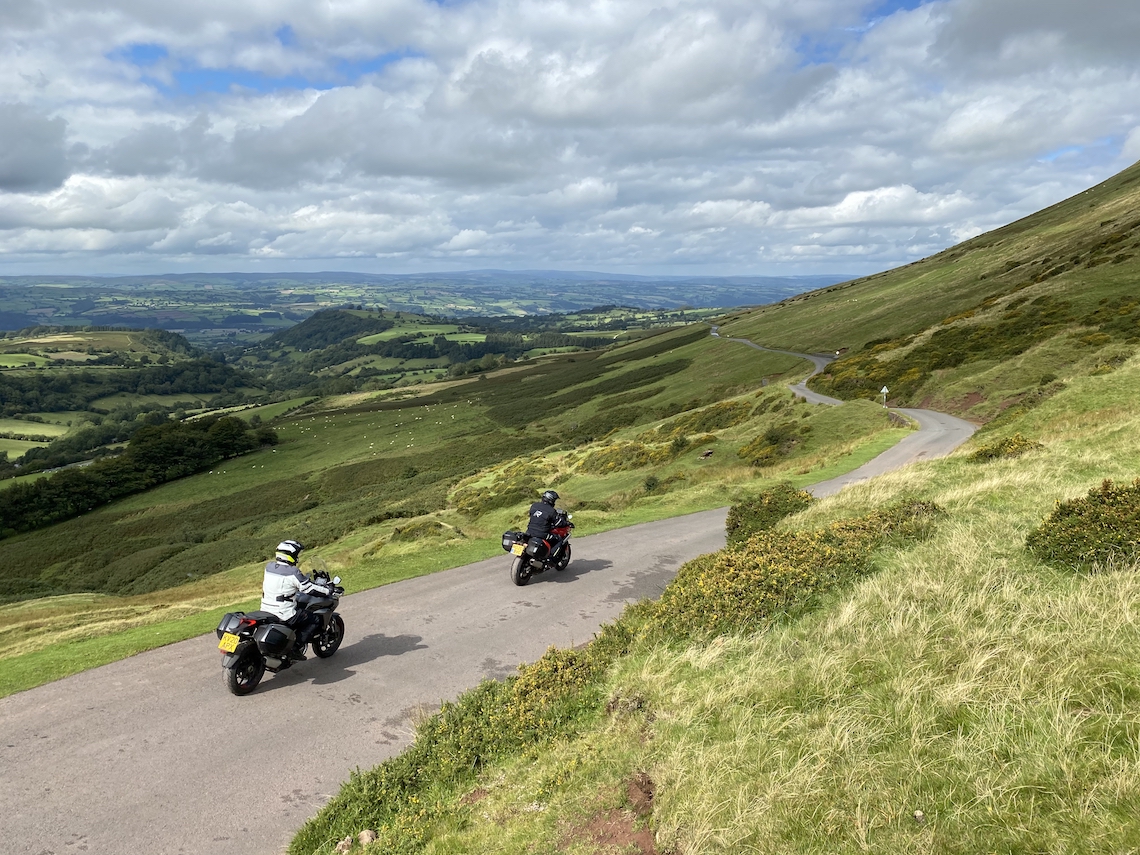 It was those mountain passes that inspired us to create the Welsh Super 10. On one unseasonably rainy day in August, the ABR editorial team had gathered in the office with one clear goal in mind. We wanted to create an epic ride that would pay homage to 10 years of Adventure Bike Rider magazine.

It had to be something big, something that would compete with the very best British motorcycle routes while also giving you guys a challenge. It was a tough ask which left us scratching our heads until Editor Bryn, who’s name fittingly translates to hill in Welsh, had a brainwave.

Like a man possessed, he scribbled out a route on a map as we watched on, before he held it up for all to see. The ABR Welsh Super 10 was born.

In fact, the route created so much excitement that Bryn and Assistant Editor James decided to join me in taking on the challenge. So, bright and early one sunny morning, we belted up the motorway from the ABR offices in Stratford upon Avon and took on the ABR Welsh Super 10 for ourselves, with James riding the Ducati Multistrada 1260 GT, Bryn on the BMW S 1000 XR, and myself on the Honda Africa Twin Adventure Sports.

The premise of the route is simple. Wales boasts 10 epic mountain roads that sit above 500m and the ABR Welsh Super 10 sets you the challenge of riding them all in 24 hours. The route itself is 219 miles long but don’t let the (relatively) low mileage fool you.

The nature of the roads on offer, often tricky single-tracks and winding, narrow passes, guarantees a full-blooded riding challenge. All things considered, with lunch, fuel and photo stops taken into account, you should expect it to take around 12 hours to complete. So, let’s get started… 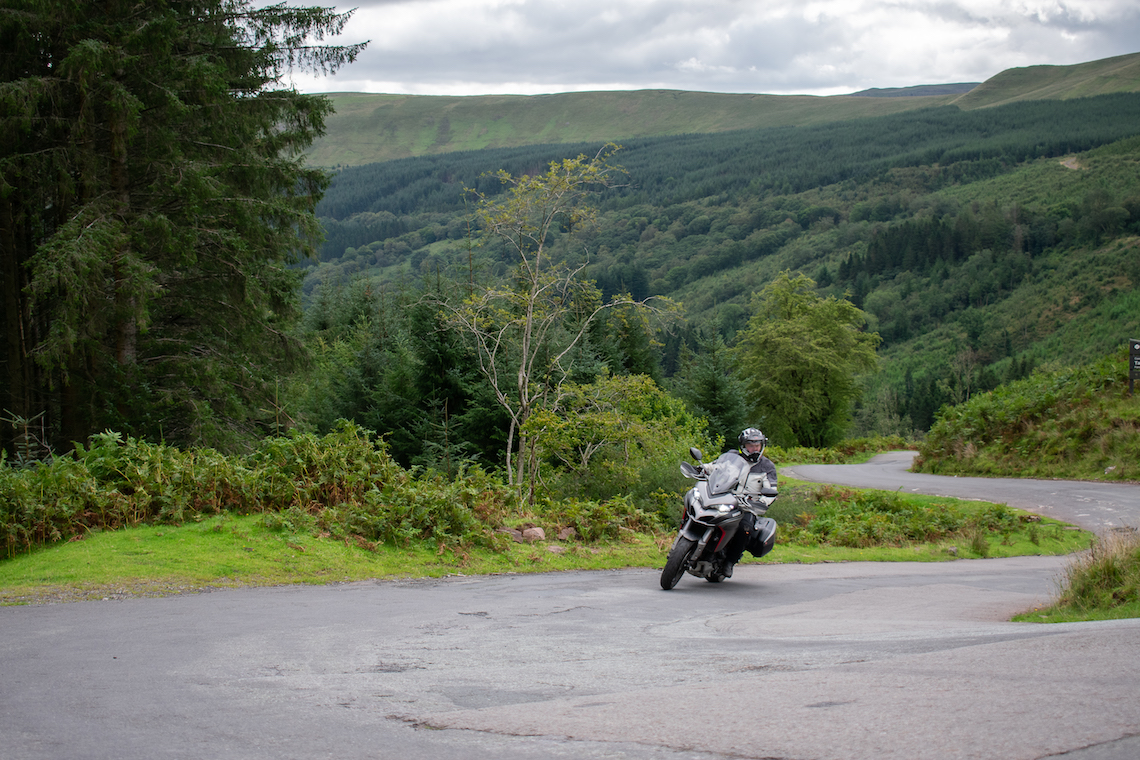 Starting bright and early in Abergwynfi, we quickly tick off the first of Wales’ 10 highest roads, taking in the highest A road, the A4107. The succession of long sweeping turns and magnificent hairpins top out at 527m, placing it fifth on our list.

It drops down into the Rhondda Valley, just a stone’s throw from the birthplace of Alun himself. There’s no time to pause though as we quickly tick off another road on our list, the Rhigos mountain road which is the tenth highest on our list. It features some fun tight bends and proves a great warm up for what’s to come.

The road also opens up to a breath-taking view of the Brecon Beacons in the distance, with a layby by the side of the road providing the perfect opportunity to pull over and take it all in. Those who arrive a bit later in the day may be joined by an ice cream van which inspired Bryn’s childhood nickname for the road, ice cream mountain.

Moving on, we drop down into the neighbouring valley by way of some tight hairpins as we head in the direction of the Brecon Beacons. We dip into the National Park and ride a series of narrow lanes that hide in the shadow of Pen y Fan before reaching the village of Talybont-on-Usk. 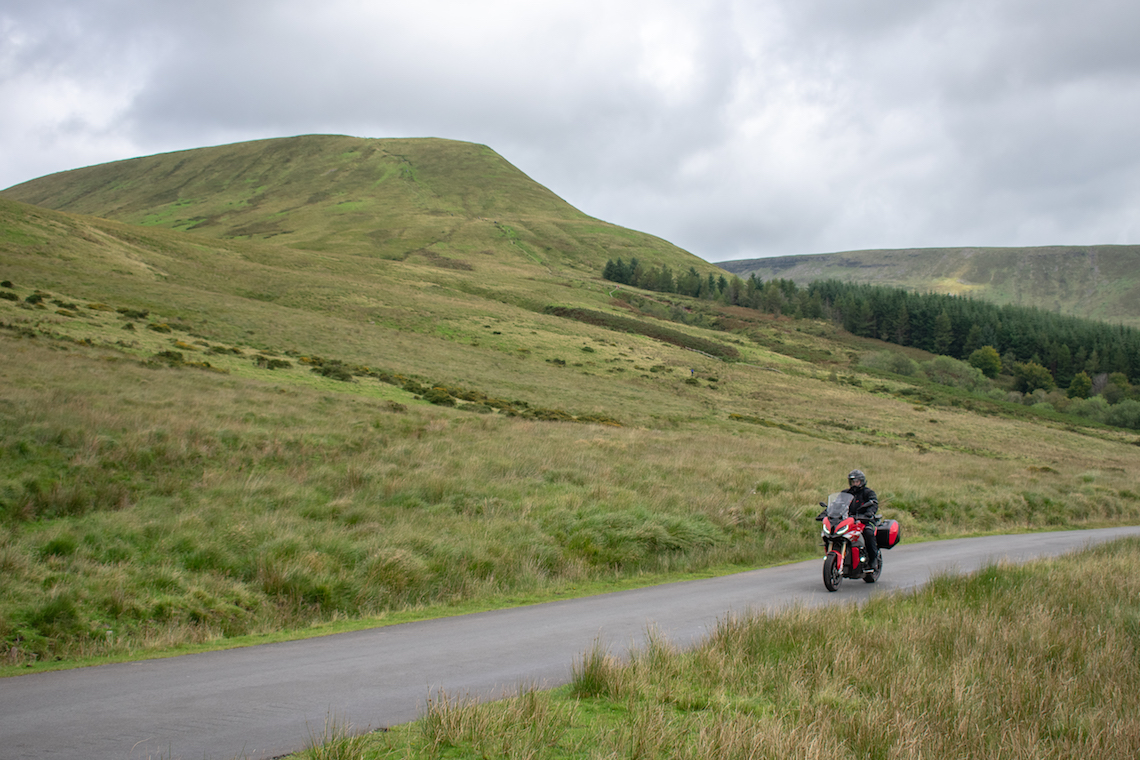 We then head towards the magnificent Llangyidr mountain road which is the sixth highest of the challenge. Once again, Wales delivers yet another jaw-dropping pass.

Gliding along silky-smooth tarmac, we find ourselves stealing glances at the countryside dropping away to our left as we climb up the mountain to a height of 518m. As with all the roads featured in the challenge, it’s one to take at a relaxed pace so you can savour the views and keep a watchful eye out for the sheep and wild horses that occasionally stray onto the road.

Next up is the Blorenge, which sits just 6m lower than the previous road. It’s slightly wider and designed to accommodate more traffic than some of the other roads on the list, which gives us an opportunity to twist the throttle and enjoy some sumptuous twisties.

However, ensure you take a moment to soak up the views at 512m above sea level, but don’t take too long. This is a challenge after all! 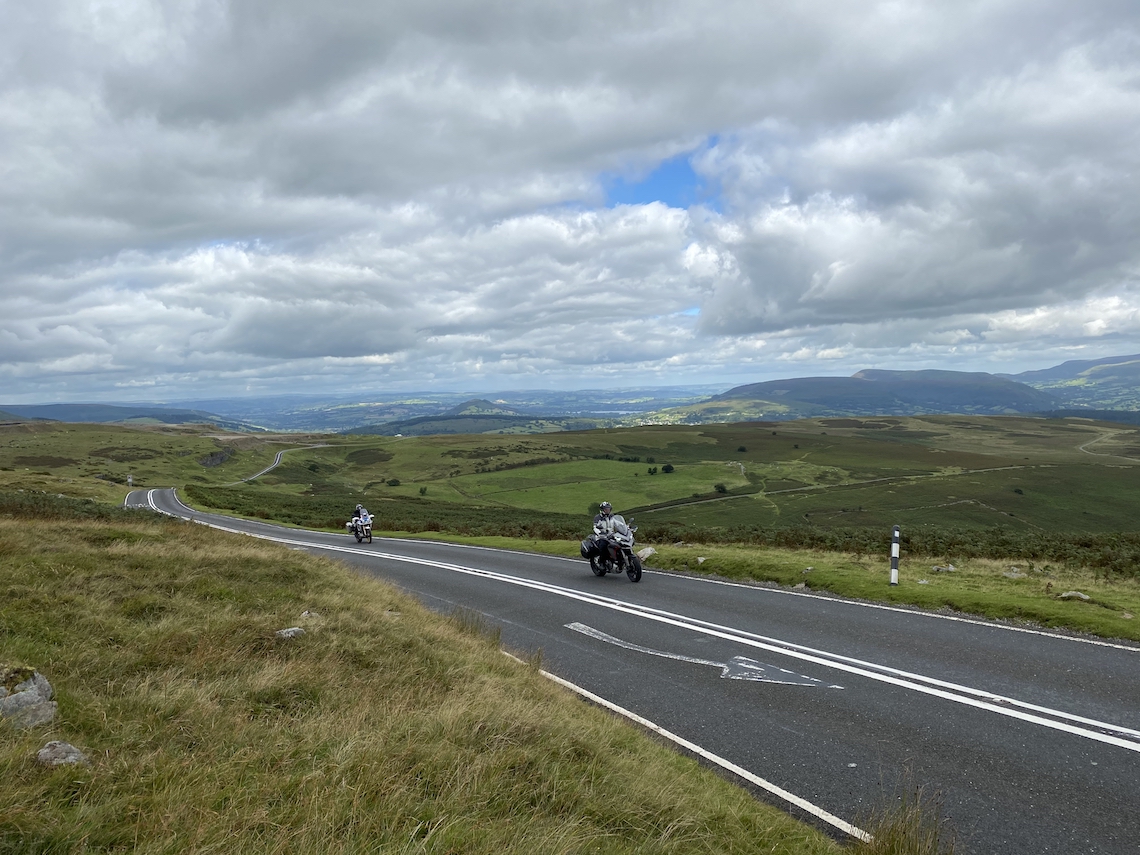 The highest road in the challenge

We now head in the direction of the highest road in the challenge, the famous Gospel Pass. Approaching from the south, we navigate a warren of narrow single-track roads that barely have room for two bikes to pass, let alone cars. However, navigating this network of nadgery lanes is worth it when you crest the peak of the hill at 549m and a panoramic view of Wales unfurls before your eyes.

This point marks the highest point of the Gospel Pass and it’s a scene you’ll want to stop to savour before continuing on down the other side of the pass, before navigating yet more tight lanes to Hay-on-Wye. The town is world renowned for its book festival and the perfect spot for lunch as it marks the halfway point of the challenge.

After filling your belly, we take the road north and, after a morning exploring slower roads, we pick up the pace as we approach our next road, the Bwlch y Cloddiau. Occupying third place on our list of highest roads, it’s actually a dead end but don’t let this deter you from exploring its length.

Cutting through remote moorland with only the rolling hills and a smattering of sheep for company, it’s easy to feel like you’re the only person on earth. If you’re riding this route without the GPX file it can be tricky to find.

From Llangurig, take the A44 heading west out of the village before taking the first left turn as the road bends away to the right. Keep right as the road forks and it will quickly climb into the hills. We turn around when we reach the gate at the end of the road and head back to re-join the main road in the direction of Llanidloes and the Rhiw Fawr. 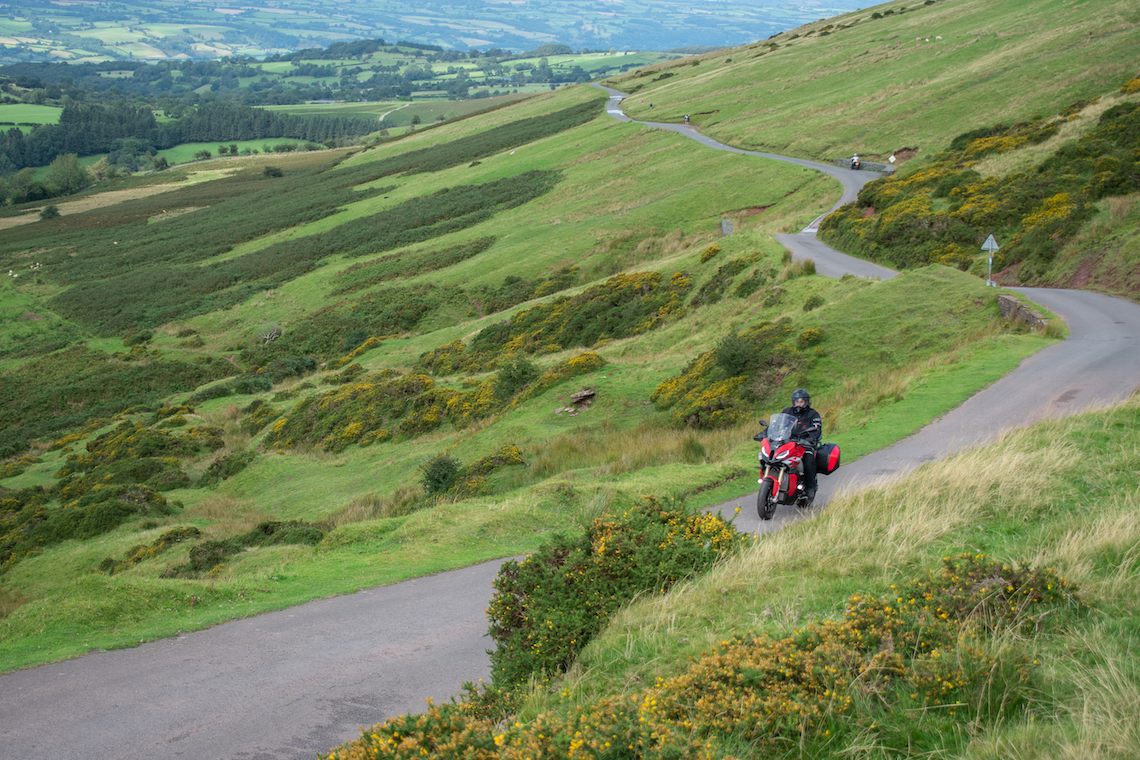 Ticking off the final few roads

It’s another cracking road on our list which also allows us to make swifter progress through the middle of Wales as we head towards the final section of the challenge.

Next up is the Dol-y-Moch which stretches off into the distance as it snakes through vast swathes of empty Welsh countryside. Once again it takes us through a stunning landscape where you’re unlikely to see another living being other than those with four legs and trotters.

We loop around the vast Bala Lake before ascending Cwm Hirnant, which tops out at 507m, making it the ninth highest road on our list. Finally, we ride along North Wales’ second highest paved road, the Bwlch y Groes, which offers more stunning views of rolling hills and valleys, before we drop down to the peaceful banks of Bala Lake where the ABR Welsh Super 10 and a fantastic day in the saddle ends.

If you take on the ABR Welsh Super 10, I’d love to know how you got on, so please do send me an email with photos and stories from the road. Send them to ollie@adventurebikerider.com.

Ride the ABR Welsh Super 10 yourself 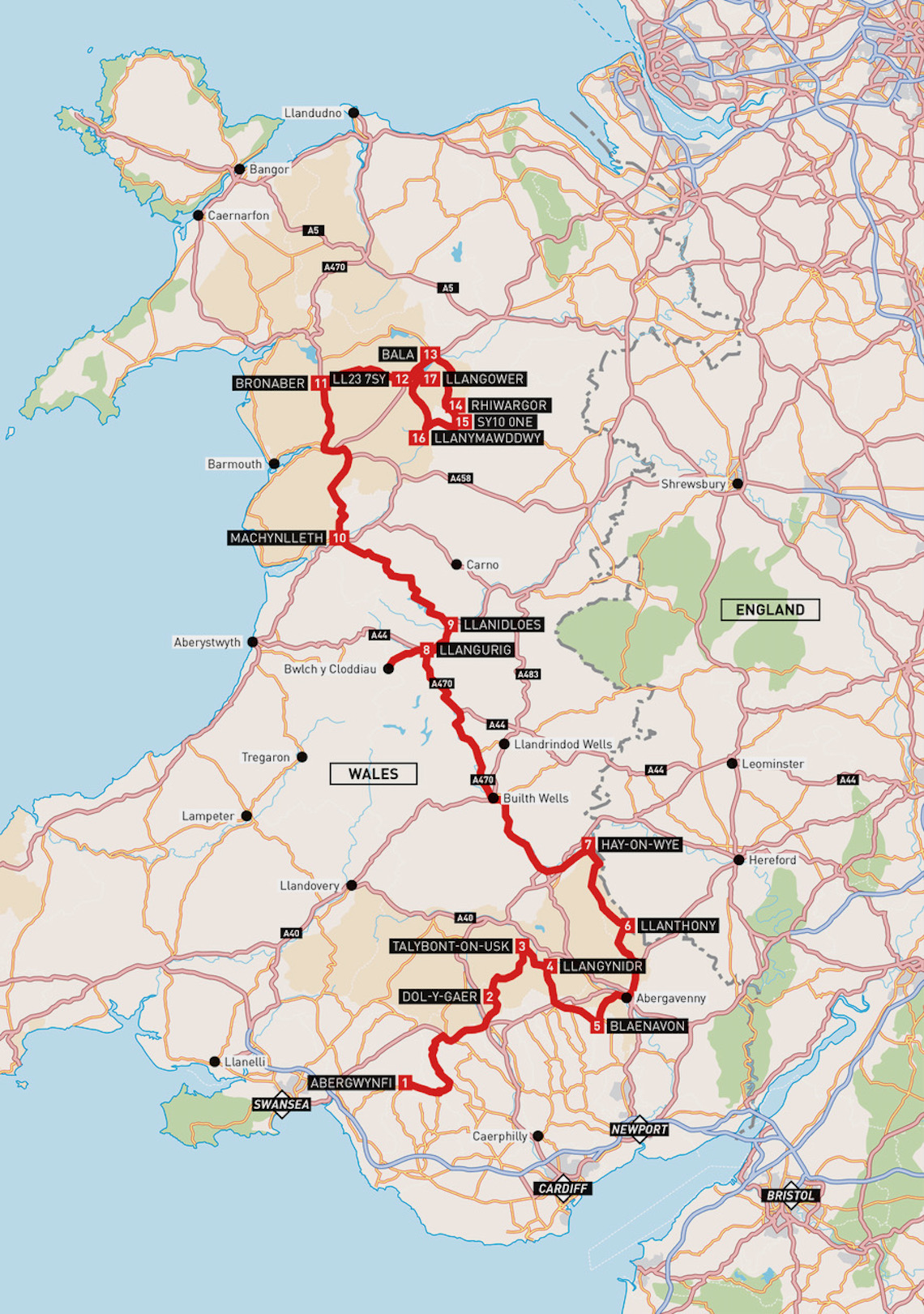 Plug these waypoints into your SatNav, and you’ll follow, as near as dammit, the ABR Welsh Super 10 Route. The route is also available as a gpx. file download so that you can stick it straight in your device. Click HERE to get your download.