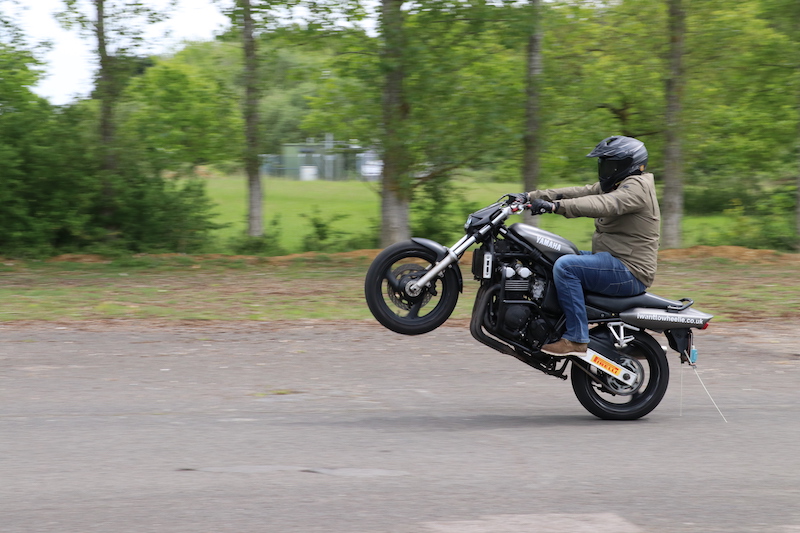 Learn to wheelie: Will it improve your riding?

If you learn to wheelie, will it increase your skills as a rider? ABR Editor Bryn Davies finds out…

What’s the point in being able to wheelie? It’s a question I found myself asking whenever I saw someone effortlessly lifting their front wheel. My standard response to myself was predictable; there isn’t one, wheelies are only good for showing off and, while that guy may be a better rider than me, he’s probably a right knob. Jealousy will make you say and think those things!

Realising I was turning a little green, I decided to find out what the fuss was about, and so I set out to discover if there was actually any benefit to learning how to wheelie. I got in touch with I Want to Wheelie, a school based at Finmere Aerodrome, on the border of Oxfordshire and Buckinghamshire, whose sole purpose is to teach people how to lift their front wheel off the ground in a safe and controlled manner. A few days later and I was sitting on a nearly-stock Yamaha FZS600 Fazer, being briefed on how to learn the technique and why it’s worthwhile to do so. (You can watch me in action at the training school in the video below).

The guys at I Want to Wheelie teach the ‘weight transfer’ method of wheelieing which consists of three clear actions that will, in theory, get your front wheel off the ground. The first action is pinning the throttle back as far as you can, jamming the power of your machine on in order to launch forward and load the rear suspension. On large, powerful bikes, this may well be enough to lift the front wheel (called a power wheelie), but it’s not always consistent and doesn’t put the rider in as much control (which is why the guys recommend learning the weight transfer method).

Once we’d pinned the throttle, we were told to ride forward about 5m, designated by some yellow cones on the airfield. Upon reaching the cones, it was then a case of letting off the power before twisting the throttle again in a fluid motion that should take no longer than the time it takes to say ‘off, on’. This has the effect of loading the front suspension when you let off the power, and then as you turn on the taps, the rear gets compressed and the front is free to rise, effortlessly putting you into a wheelie. In theory. 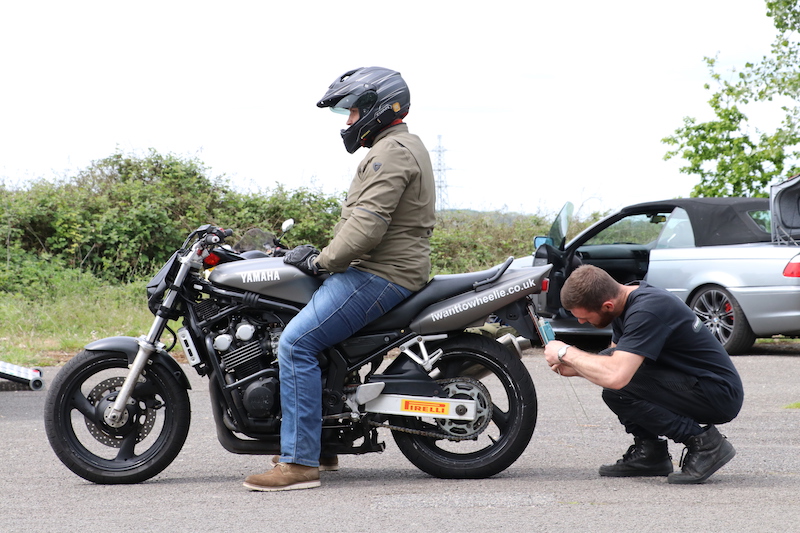 A flick of the wrist

In order to get ourselves comfortable with the bikes and the sequence of throttle twists that were required, we first set out to ride around our coned-off circuit a few times, maintaining first gear as we went. We started with part one; opening the throttle with a flick of the wrist, maintaining an upright body position which would give us greater control and lead to less fatigue when we finally got the front up.

At first, the whole thing felt unnatural and against everything my mind was telling me about riding. I didn’t want to twist the throttle as aggressively as that, but I trusted the experts and let rip. A few laps passed and my mind was starting to accept the different way of doing things.

After a few laps around the course, we were then told to incorporate the second stage, coming off the power and then twisting back on. This would bring the front wheel up and give us our first taste of wheelieing a bike and we’d only been in the saddle for 10 minutes! The first time I did it, the front bounced up, I grimaced and uttered swear words to myself. I felt out of control and the movement of the bike seemed unnatural to me. The adrenaline was pumping as my front wheel returned to the ground. 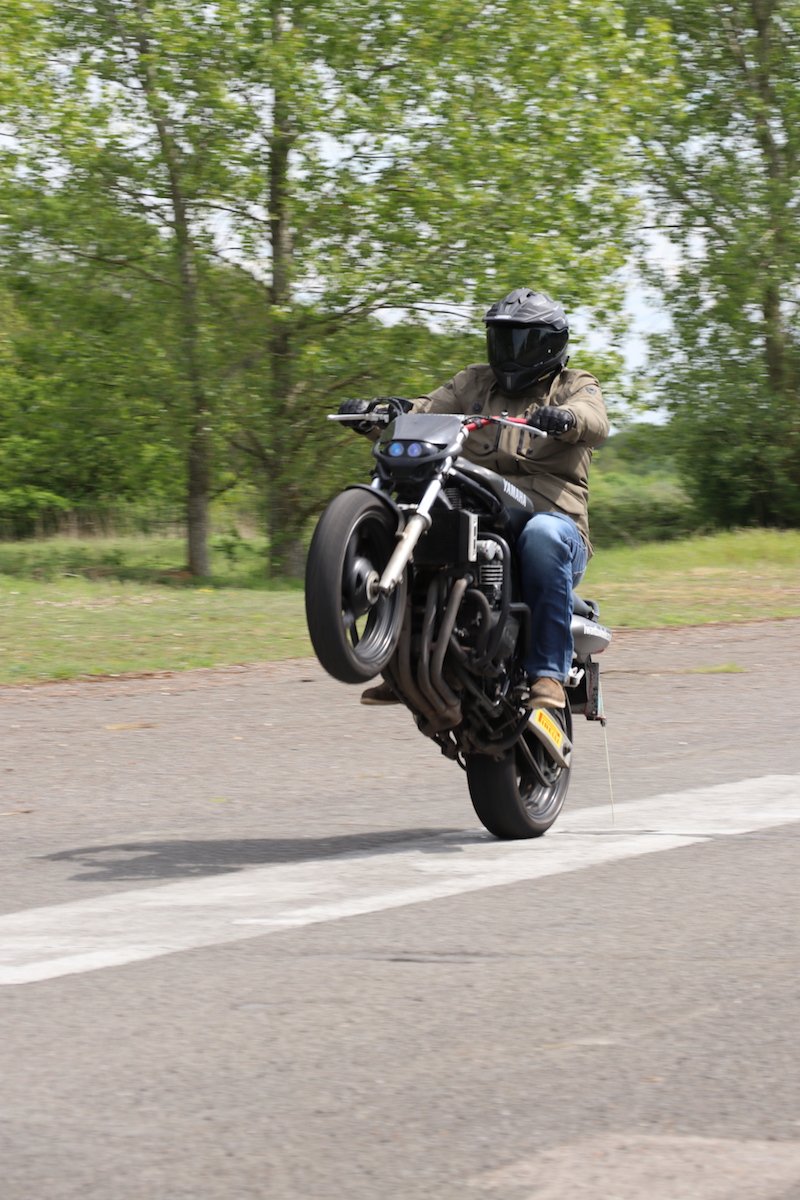 Of course, I wasn’t in any real danger when that front wheel came up as the school employs the latest anti-flip technology to prevent over enthusiastic twists of the throttle from tipping you onto your back. This consists of two sticks attached to where the reg plate of the bike would be, one longer than the other.

When the longer stick makes contact with the ground it cuts the bike’s power slightly to a help prevent the front wheel rising any more. If the second, shorter stick makes contact, it cuts the bike’s power by 50%, bringing your front wheel back to terra firma. It looks a bit rudimental, but in practice it works flawlessly. Throughout the day, as we progressed and became more comfortable with the front wheel’s height, our sticks would be shortened, allowing us to get higher. 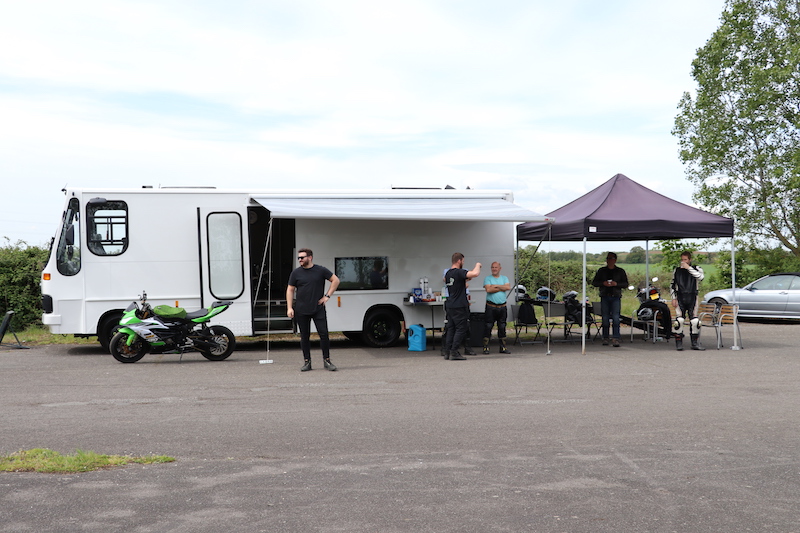 After riding in circles for a few hours repeating the same routine of throttle on, throttle off, throttle on, it all started to come together. I was consistently getting my front wheel up and muscle memory was making the process feel more natural. Our instructors, who observed every lap and every wheelie attempt, would regularly pull me aside and suggest little tweaks and give feedback to make things easier. After each suggestion, things would get a bit more fluid as poor form was corrected, and before long I was wheelieing the entire 60m distance, designated by more yellow cones.

As I progressed, the sensors on the rear of my bike were raised, allowing me to bring the front wheel higher and higher, things were looking good! By the end of the day, I could get the front wheel up with ease and travel the 60m between the yellow cones consistently. By the time the day was done, I was smiling from ear to ear having had a day of great fun while also learning some valuable lessons. 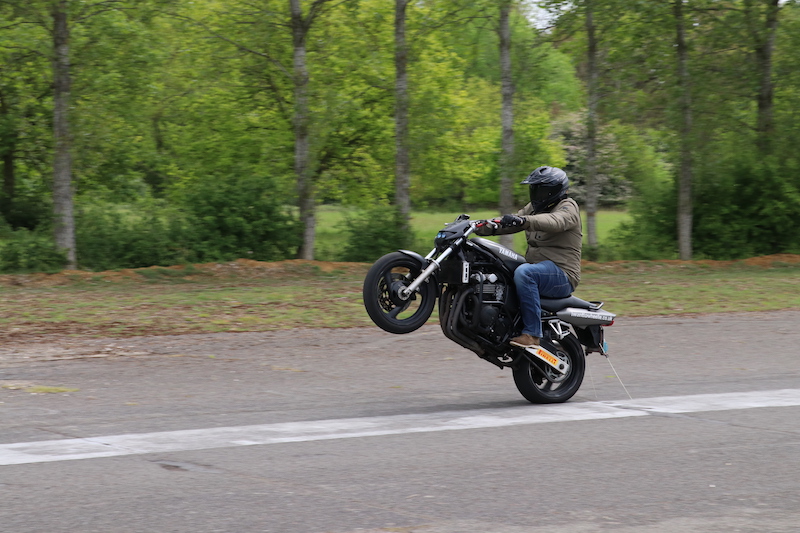 Will it improve your riding?

Honestly, yes it will. Even if you never perform a wheelie again, understanding balancing points and experiencing the feeling of a wheelie has a definite impact on your confidence in the saddle. For myself, the first time the front wheel came off the ground my face contorted and I tensed up, which isn’t what you want to do if you find yourself accidentally lifting the front wheel as you power out of a bend or give it a bit too much at the traffic lights. Knowing how to handle those situations, and even how to own them, can only be a good thing, and once you master them, there are more practical benefits when riding off road.

Get down to I Want to Wheelie to find out for yourself.