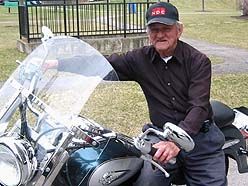 When Suzanne Taylor was just a child, her derring-do father, a jug-eared little man who stood 5ft 5in tall and weighed no more than 9st, made international headlines in the lead-up to his epic adventure in 1975 to ride a motorcycle across 500 miles of ice pack to the North Pole.

Jim Taylor, then approaching 40, had captured the world’s imagination. He was on television, radio, and in virtually every newspaper worth its ink. He had written to kings and queens, sultans and dictators, for financial support, with King Hussein of Jordan writing a cheque for $1,000 to help see him on his way towards what was budgeted to be a $30,000 journey.

He sold chocolate bars to help pave his track into history, and printed up special envelopes for contributors that he would officially ‘mail’ from the North Pole.

And then, when Suzanne Taylor was in her late teens, her father (by then a real estate agent, licensed pilot, still a hell-bent adventure-seeker and dyed-in-the-horse-hair gambler) simply disappeared off the face of the Earth.

One day he was off to Florida to make his fortune by selling off a vintage 15-metre yacht he had restored, supposedly one of only two in the world, and the next he was gone, never to be heard from again.

Jim Taylor’s North Pole adventure predictably went bust. Some likened it to going to the moon in a balloon, his mode of transportation being a Suzuki motorcycle with foam-filled tires, a telescopic ski on the front, and a compartment that hid two tents, radio equipment, a 357-Magnum to fend off polar bears, and rudimentary survival gear.

Less than five miles into the journey, Jim Taylor found himself bogged down, the snow drifts near his base camp on Ellesmere Island too deep for his machine.

According to the late Paul Ross, his camp radio operator at the time, Taylor attempted to manually haul his motorcycle six miles to the frozen Arctic Ocean where the bike’s studded tires might grab hold. But he could not make it.

>>> Related: Read the story of Shinji Kazama, the first man to motorcycle to the North Pole

Suzanne Taylor has only vague memories of all this. What she remembers most goes back to her early teenage years, long after her parents divorced, spending a summer in Port Credit, and helping her father restore an old yacht that he was “going to sell to rich Americans in Florida.”

“He was fun to be around. He was exciting. He was always heading off to another adventure – scuba diving in Australia, or Barbados, or wherever,” she says. “He told me the yacht was going to be his ticket to a fortune. And that’s the last I heard from him.”

In the end, it was Suzanne Taylor’s own children, Brittany and Jacob, who got her thinking once again of her father, and new computer skills that had her searching online for clues of his whereabouts.

Whether Suzanna met up with her dad is unknown (if anyone has any information, we’d be grateful to hear it).