Is the Splugen Pass the most exciting road in the Alps?

If you’re making your way over to the Alps at all then you’ll no doubt have your personal bucket list of high mountain passes that you’ll be aiming to ride. Most will include the biking Mecca that is the Stelvio Pass, then there’s the impressive Furka Pass, the Col de l’Iseran, or the highest paved pass in the Alps, the Cime de la Bonette.

But if it’s dramatic scenery, exciting riding and roads that showcase the very best of Italian engineering, then the Splügen Pass is a must. 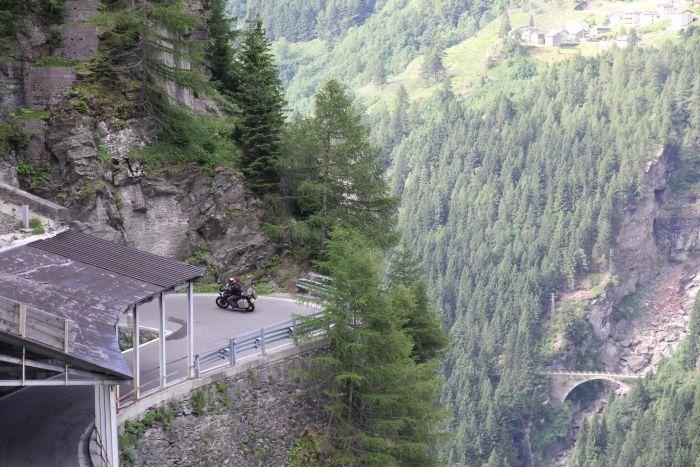 The pass, which reaches an altitude of 2,115m at its highest point, connects the Swiss Hinterrhein valley in Graubunden with the Valle Spluga in the Italian province of Sondrio, with riders crossing the border of the two countries at the top of the pass. Approaching from the Swiss side, the road begins its ascent out of the small town of Splügen . Almost immediately you’re treated to a series of four hairpins that take you through a wooded hillside, and already the views below begin to open out.

The road becomes less erratic for the next few miles, but don’t let this fool you into thinking that the ride is over. It hasn’t even begun. Just before you reach the crest of the pass, a series of 10 of the most ridiculously laid out hairpin bends present themselves, and the riding becomes absurd as you wrestle your bike around each steep switchback, dodging the oncoming cars whose brakes must surely be burning up. 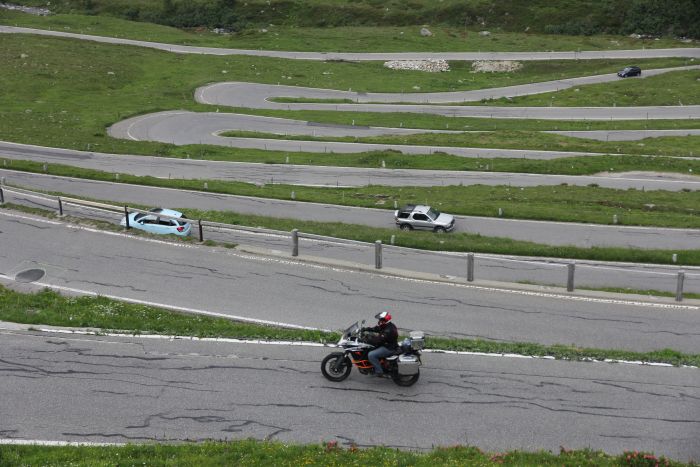 After you pass the Berghaus Splügenpass, the riding becomes a little less hectic as you cross the border into Italy, but the scenery is enough to keep you occupied. The road will take you around the shores of Lago di Montespluga, before descending deeper into Italy.

As you pass the turning for the ski resort of Madesimo, the descent becomes spectacular. The tarmac clings to the side of the steep valley edge and when you take a step back to admire the twists and turns along with the balconies that have been cut out from the rock, the pass becomes an intricate work of art and a testament to Italian engineering. 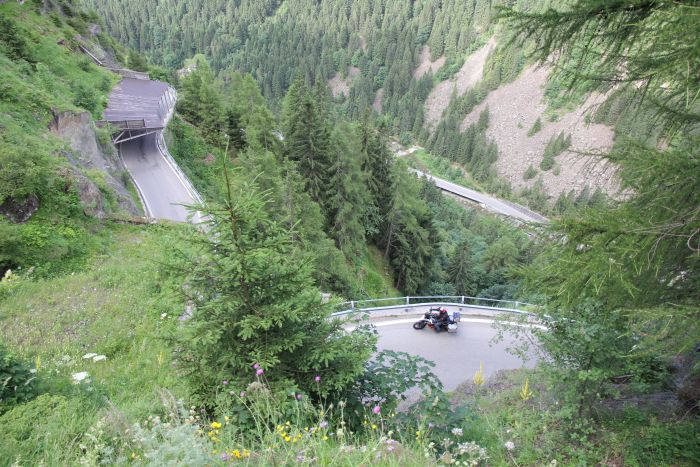 You’ll need your wits about you as you round the tight, steep hairpins as oncoming traffic is likely to be over your side of the road, and the tunnels on the south side are unlit and, in places, only just wide enough for one car to fit through.

The Splügen Pass in its modern form was built between 1818 and 1823, and in 1840 Mary Shelley, author of the Gothic classic, Frankenstein, travelled over it with her son. The Splügen Pass made such an impression on her that she wrote about it in her travel narrative, Rambles in Germany and Italy. On the pass she wrote:

“A new and most marvellous road has been constructed – the mountain in question is, to the extent of several miles, cleft from the summit to the base, and a sheer precipice of 4,000 feet rises on either side. The Rhine, swift and strong, but in width a span, flows in narrow depth below. The road has been constructed on the face of the precipice, now cut into the side, now perforated through the living rock into galleries: it passes, at intervals, from one side of the ravine to the other, and bridges of a single arch span the chasm. The precipices, indeed approach so near, in parts, that a fallen tree could not reach the rider below, but lay wedged in mid-way. 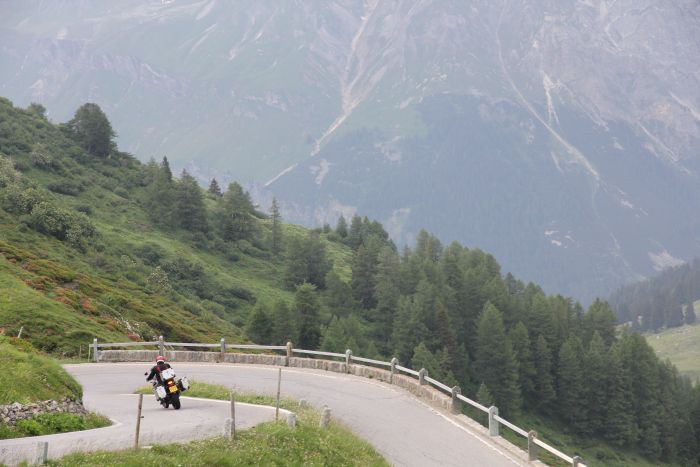 It may be imagined how singular and sublime this pass is, in its naked simplicity. After proceeding about a mile, you look back and see the country you had left, through the narrow opening of the gigantic crags, set like a painting in this cloud-reaching frame. It is giddy work to look down over the parapet that protects the road, and mark the arrowy rushing of the imprisoned river. Mid-way in the pass, the precipices approach so near that you might fancy that a strong man could leap across.”

Give it a ride, you won’t be dissapointed.