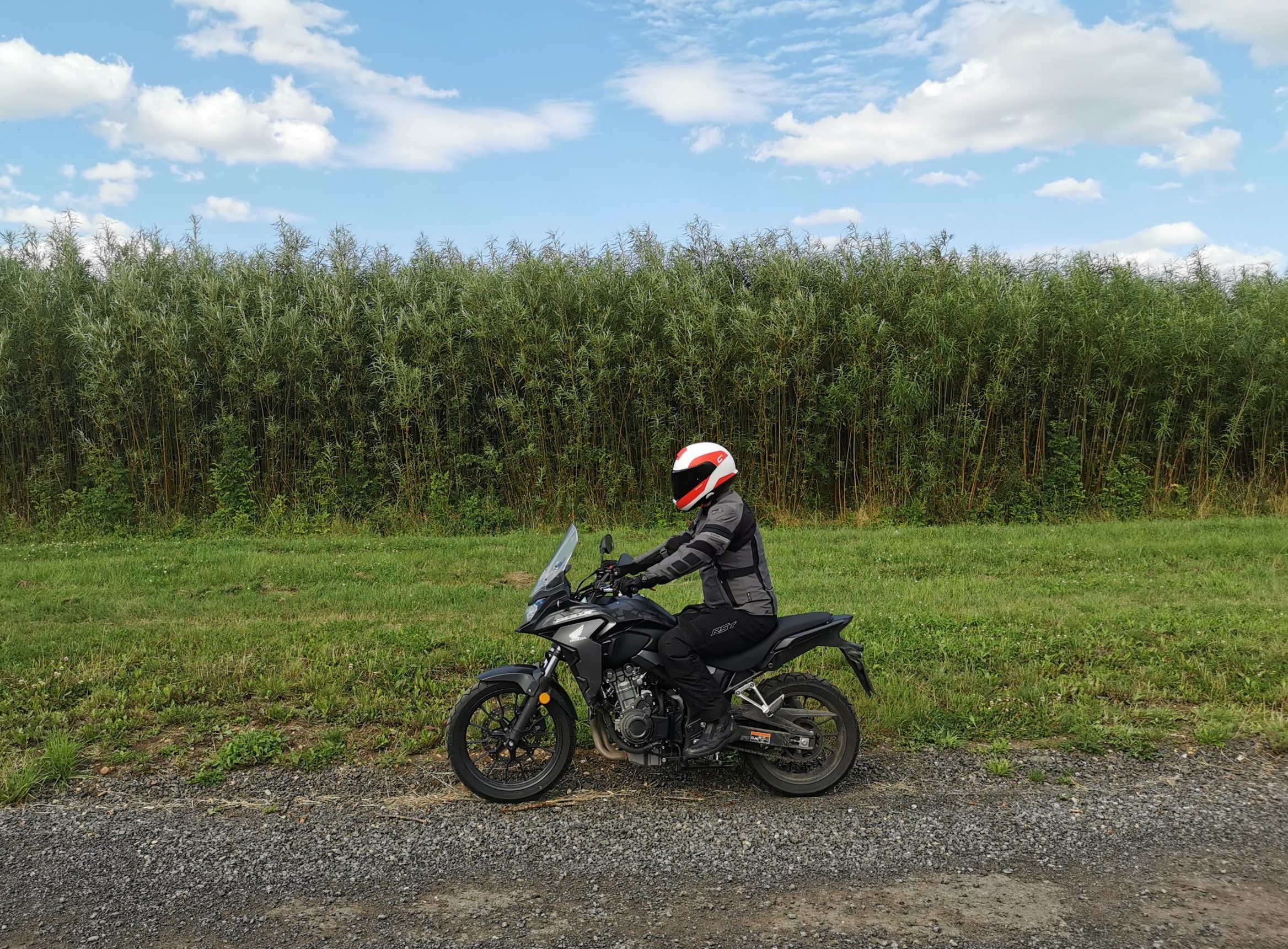 Honda hit upon a winning formula when it released the Honda CB500X back in 2013. For a smidgen over £5,000, you could ride away on a versatile adventure-styled bike that was a superb commuter, fun on weekend blasts, and was capable of, if not ideally suited to, touring long distances.

The CB500X was even happy indulging in some light off-roading, although its credentials in the dirt were limited by less than plush suspension and a 17-inch front wheel.

Overall, the CB500X was a fun and adaptable motorcycle. Its peppy, A2 compliant, 47bhp engine, combined with the bike’s relative light weight and low seat height, appealed to a wide range of buyers, whether they were newer riders looking for a way into adventure biking, commuters needing cheap transport, or older bikers wanting to downsize from larger and heavier machines. I was so impressed with the CB500X, I bought one. 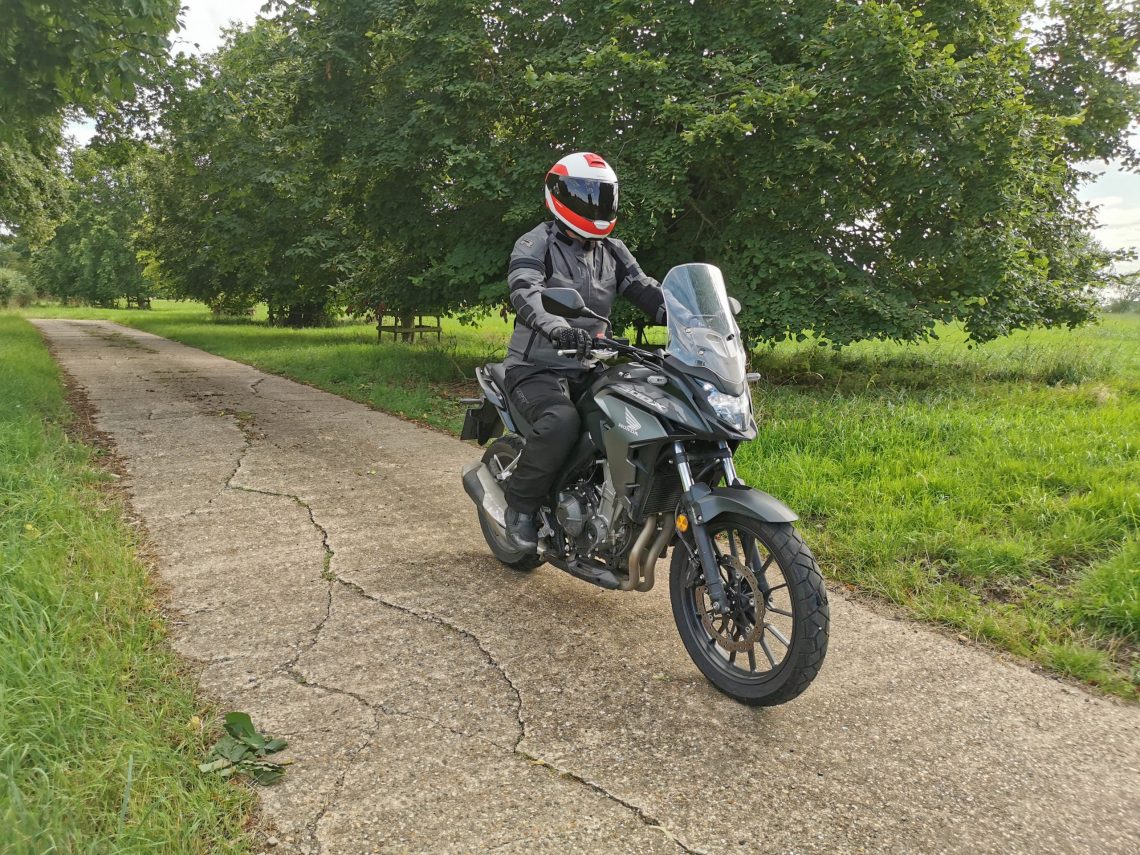 For just £4,500 of my hard-earned cash, I got my hands on an ex-demo model and spent the following two years slicing through the chaotic and congested streets of central London on my daily commute.

The CB500X was the perfect foil, allowing me to wriggle through tiny gaps between bumpers, mount curbs, slingshot away from traffic lights, and squeeze into the smallest of spaces in the city’s overpopulated motorcycle parking bays.

As a Londoner living in a tiny flat with no garage to park a bike in overnight, the CB500X was also one of the only adventure-styled bikes I could afford to insure at the time.

I would also regularly pack up my panniers and ride out of the city, usually down to Cornwall 250 miles away to visit family at weekends. On those journeys, the CB500X cruised confidently between 70 and 80mph, but started to become a little twitchy at higher speeds. 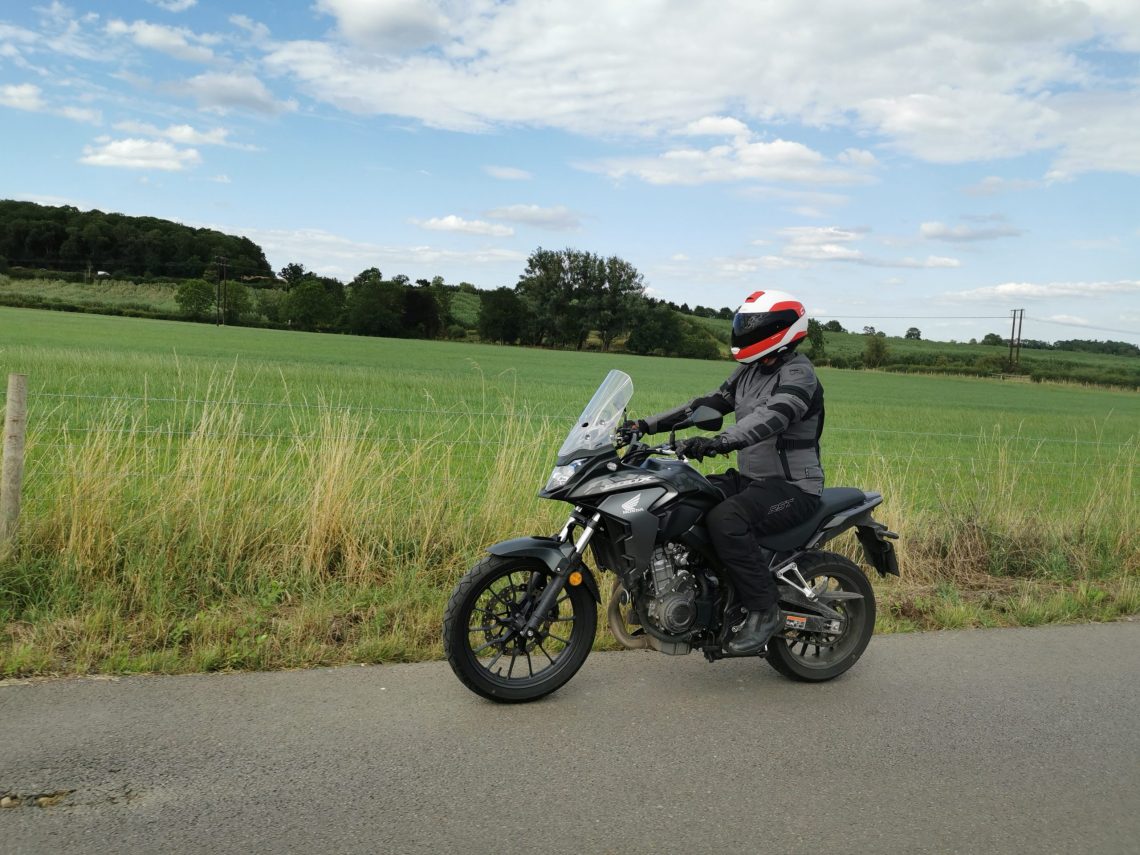 I also have happy memories of taking the CB500X touring in Europe. I travelled through France and over the Pyrenees to play on the dirt trails of the Bardenas Reales desert in Spain. I even took a trip over the Alps and down to Italy with my then girlfriend perched on the pillion seat.

The plucky little Honda scaled the likes of the Furka and Susten passes, two-up with plenty of luggage, without complaint. For sure, we felt rather cramped, and the lack of stopping power in the single-disc front brake added a sense of jeopardy when descending mountainsides, but we were young, in love, and happy to be exploring the world together by motorcycle.

In all, I covered 35,000 miles on my Honda CB500X over two-and-half years before I sold it to upgrade to a bigger bike. During that time, I didn’t experience a single mechanical issue. The bike started every time and proved inexpensive to run. Around town. I could travel 250-300 miles on a tank of fuel. On motorways this dropped to around 200 miles. 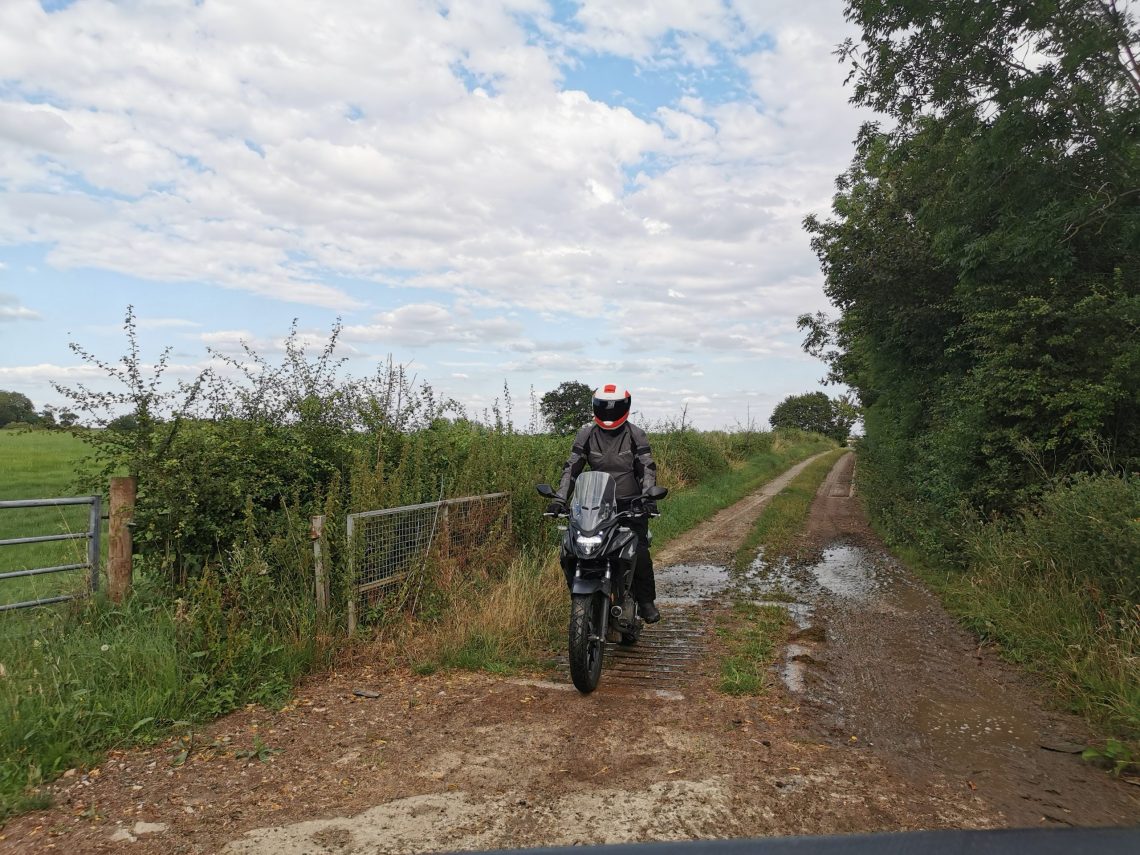 If it ain’t broke…

So, why should you care about my experiences with an earlier model CB500X when a new version was released in 2019? Mainly, because the bike hasn’t changed all that much. Thankfully, Honda has kept that CB500X winning formula, adding some polish and finesse to an already very capable lightweight machine.

The changes Honda has made to the 2019 bike strike me as an attempt to improve the CB500X’s adventure touring credentials.

Longer travel suspension, a larger 19-inch front wheel (up from 17 inches), improved wind protection, a slipper clutch, and a small boost in low to mid-range torque from the 471cc parallel twin engine, are all features that should improve the touring experience, whether you’re travelling on motorways, mountain passes, or gravel trails.

Honda also tweaked the CB500X’s styling, its designers claiming they took inspiration from the Africa Twin to make it look more adventurous. I’ll leave you to judge whether you think they achieved this or not, but the CB500X continues to be a good-looking machine that manages to combine urban and adventure styling in a compact package. 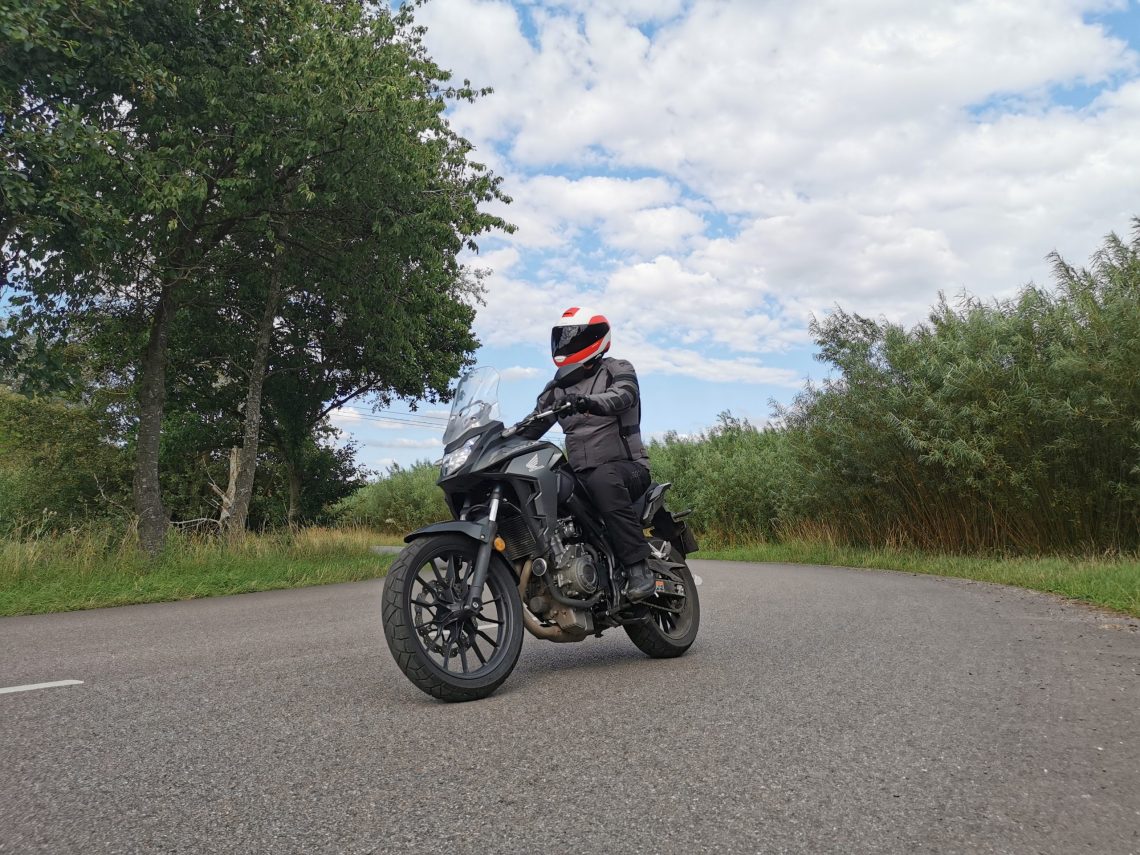 With all this in mind, I was looking forward to rekindling my relationship with the bike when the opportunity arose to test one for a few months. Riding it once again felt like greeting an old friend – one of those mates you haven’t seen for years but the conversation and laughter flows freely straight away.

Two things struck me immediately. Firstly, I’d forgotten how much fun the CB500X is to ride. The steering is so light and agile, I found myself constantly flicking the bike from side to side, diving into every turn with a childlike glee. The change from a 17-inch to 19-inch front wheel should theoretically negatively affect the road handling but, in reality, I couldn’t tell any difference.

The agile handling, along with a perky yet non-threatening power delivery, and the bike’s relatively light 197kg weight (wet) combine to create an incredibly confidence inspiring ride. I couldn’t help but chuck it around with reckless abandon on the network of twisty A roads near the ABR offices. I can’t remember the last time I smiled so much riding a motorcycle. 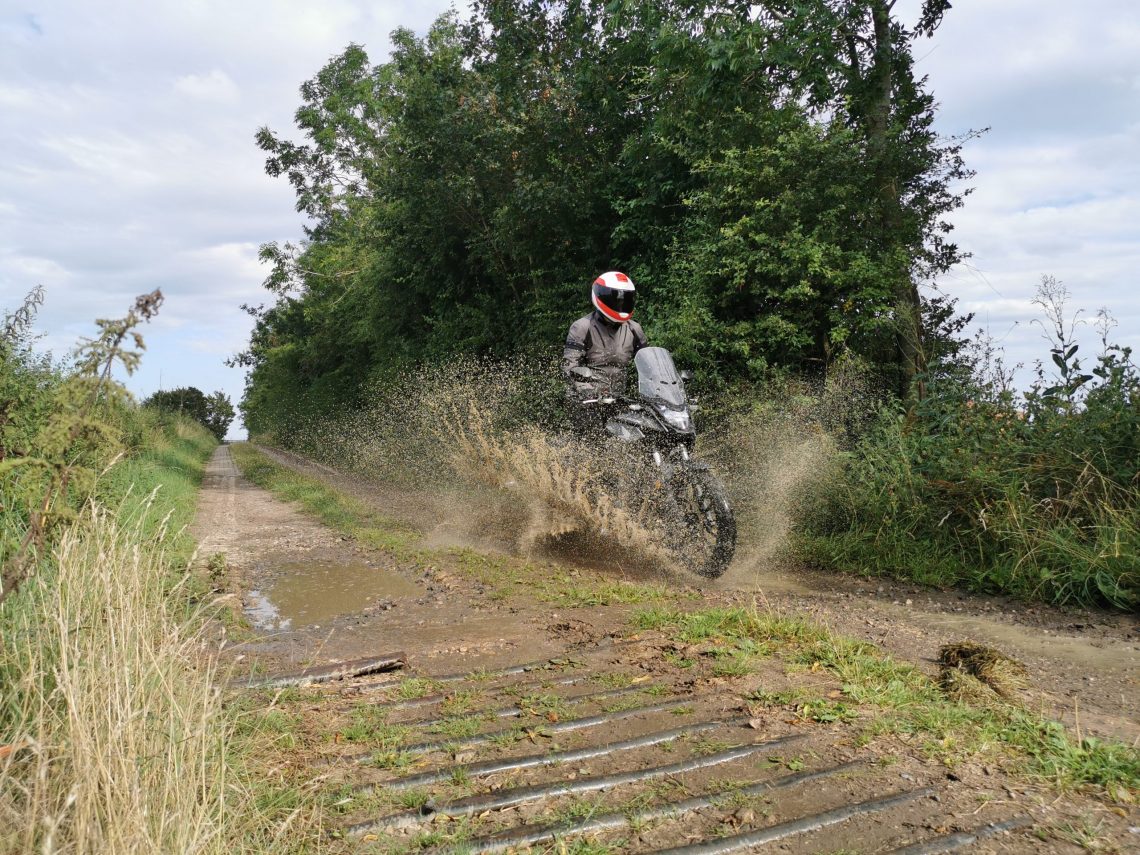 The second thing that struck me about the CB500X is I’d forgotten how small it is. This isn’t necessarily a criticism as there are plenty of people to whom a smaller adventure bike will appeal. However, compared to the mid-sized Triumph Tiger 800 XCx I’ve been riding lately, the CB500X feels about 80% of its size.

I actually found the bike’s smaller dimensions quite refreshing. I could swing my leg over the seat without having to step on the pegs and, as a 6ft tall man, I could plant both feet flat on the floor with plenty of leg bend to spare.

The compact nature of the bike adds to its ease of use and accessibility. I’d have no qualms recommending it to a new rider looking to build confidence and gain experience, or a shorter rider fed up with balancing on tip toes at traffic lights. Those smaller dimensions do result in less weather protection than you’d usually get on a larger adventure bike, but the stock screen does a decent job of channelling wind away from you. 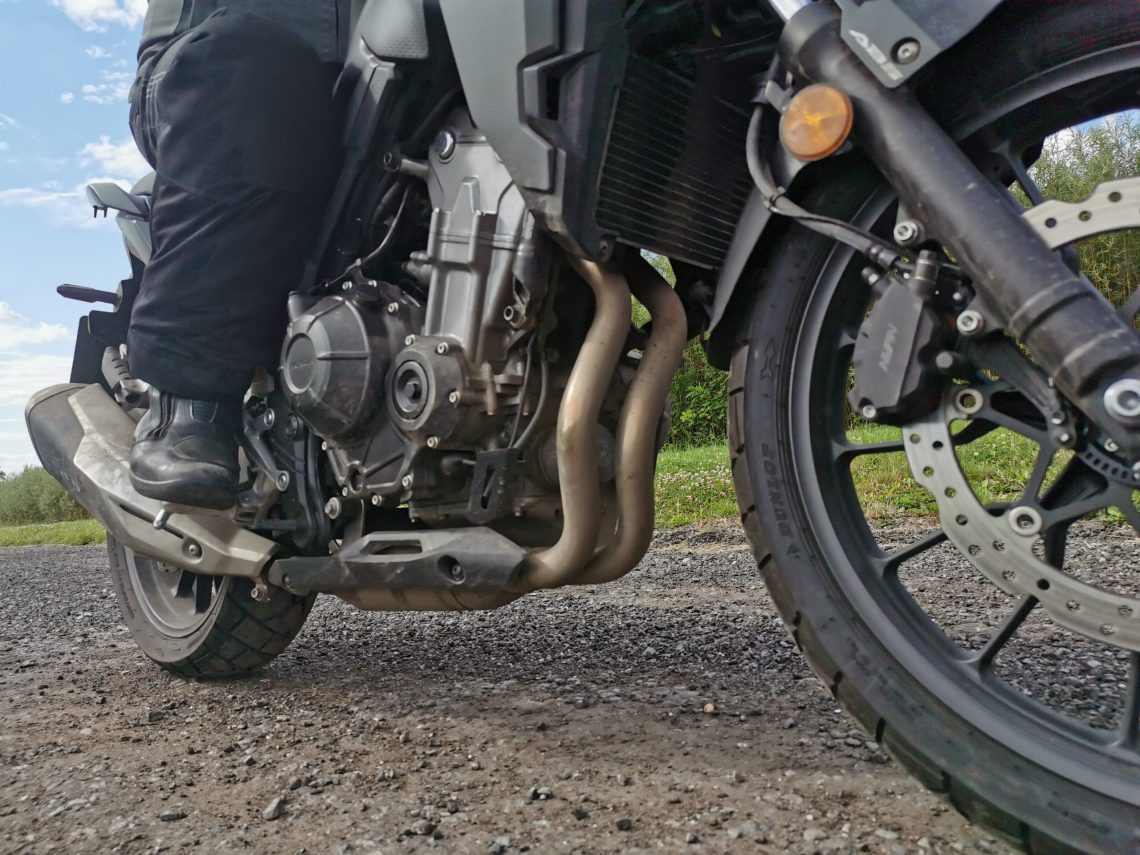 For 2019, Honda has upgraded the CB500X’s display. It’s still an LCD screen but is easier to read than the previous incarnation. Its blue hue gives the dash a more premium feel than the old green display which resembled a digital watch from the 1980s. Handily, a gear position indicator has also been added. Apart from that, technology and creature comforts are sparse on the CB500X… LED lights and ABS are all you get.

Suspension is preload adjustable, with travel at the front increased from 140mm to 150mm, and from 118mm to 135mm at the rear. Despite this, the CB500X still doesn’t perform like a dirt bike off-road, which isn’t helped by its limited 180mm ground clearance.

The suspension is relatively easy to bottom out over bumps, and the standing position felt rather cramped and unnatural for me at 6ft tall. However, it is more than capable of being ridden along gravel trails and dirt roads, and it will tackle more challenging terrain if you take things slow. 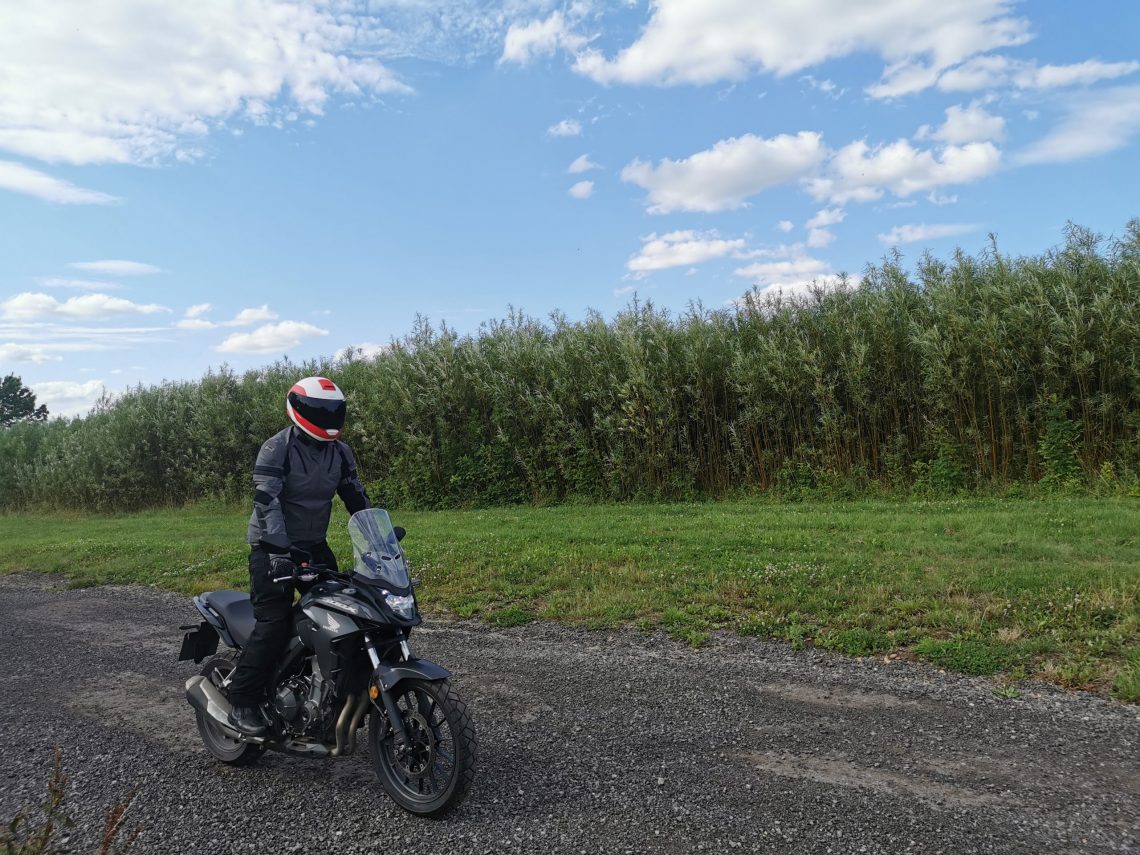 Easy on your wallet

It’s important to look at the CB500X’s limitations and lack of sophisticated technology in context with the price. For just £6,069 you get to ride away with a brand-new motorcycle that will prove a fun, reliable, and affordable travel companion for many years.

There are faster, more powerful, more comfortable bikes, that are better equipped to ride off-road, but they’ll also set you back a lot more money. The Honda CB500X will take you anywhere you want to go for a budget price, and you’ll have a lot of fun getting there.

Would I buy one again? No, but that isn’t because I don’t think it’s a fantastic little bike – it really is. I wouldn’t buy a CB500X again because I have different requirements from a motorcycle these days, for example, I swapped my city commute for long hours on motorways.

Would I recommend the Honda CB500X to someone else? Wholeheartedly. In fact, I did so just the other day to a member of ABR staff who had just passed their full motorcycle test and is looking for a first bike. The CB500X would be perfect for her.