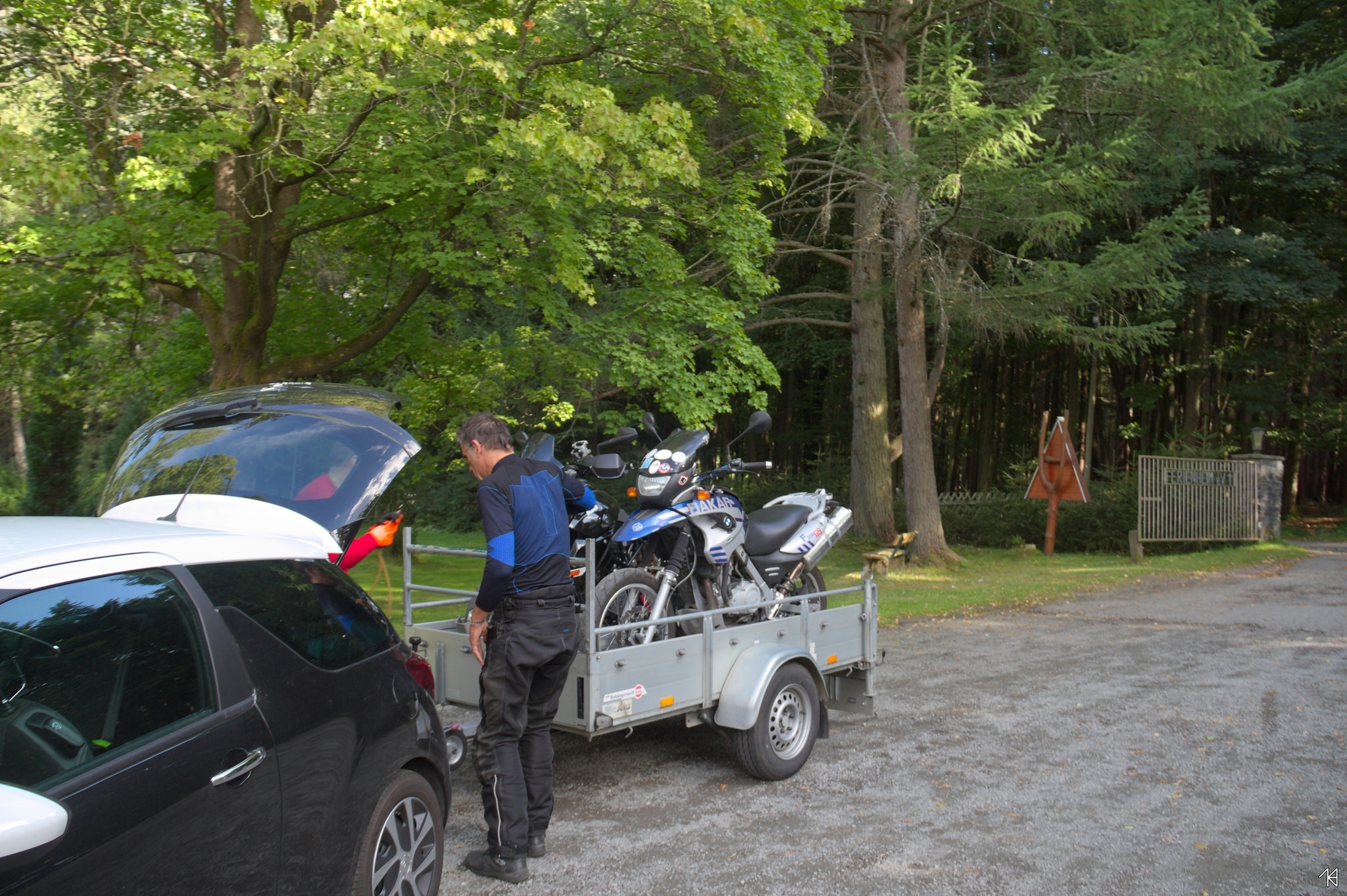 Many riders choose to use a motorcycle trailer to transport their machines. It’s cheaper than buying a van, and easy to do, but what does the law in the UK have to say on the matter? Andrew Dalton explains all…

When figuring out if you’re legally able to tow a motorcycle trailer, it all depends on when you passed your driving test. If you passed after 1 January 1997, you can tow a trailer up to 750kg which does not have to have its own braking system. That’s plenty for three trail bikes, but before you rush out and start loading up – there’s more you need to know.

If you passed before 31 December 1996, your maximum ‘all up’ weight for the entire vehicle train is over eight tonnes. Unless you are towing three GSs, weight is unlikely to be a concern for you.

It would be a very odd insurance policy which covered your trailer and bikes fully comprehensive whilst being towed, and you’ll find most insurers will cover it third party. With this in mind, it’s important to understand that you’re towing your motorcycle trailer at your own risk.

When it comes to towing safely, your bike needs to be strapped down properly. A dangerously loose bike will get you three points and a fine of up to £2,500 per load, meaning two poorly loaded bikes could see you £5,000 and six points down. Furthermore, if this is your second unsafe load conviction in three years, you’re looking at a mandatory driving ban of three months.

If you want to attract the attention of the boys in blue, don’t bother with a working light board or registration plate. The police are attracted to these easy nicks like moths to a flame, and they would be well within their right to pull you over – they can, and they should. 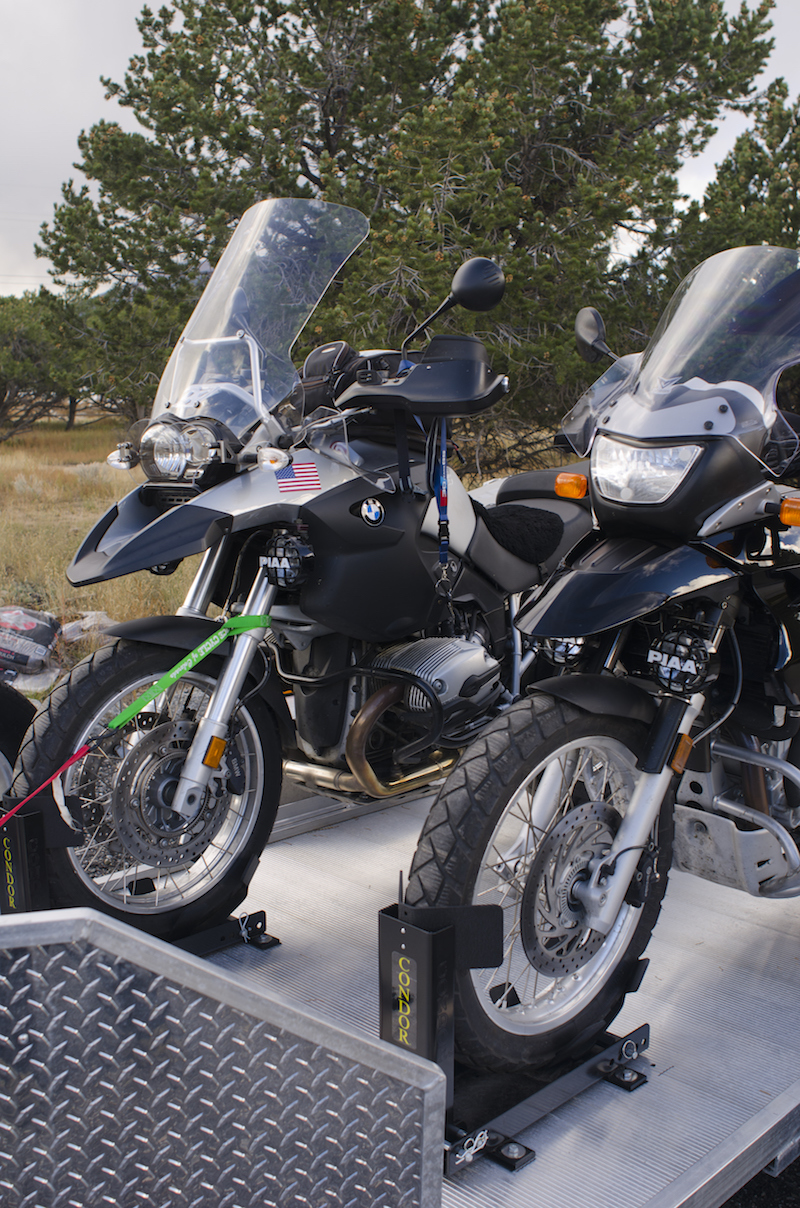 So far, so obvious. But hands up who knows what nose weight is? Extra points if you know what your nose weight limit for your car is, and top class if you can actually measure it!

Nose weight is the static down force generated at the hitching point by a towed or otherwise affixed load onto the tow bar. It is second only to the weight ratio to the tow load to the tow vehicle (which should not exceed 85%) as a safety factor, and the heavier the load, the bigger the nose weight needs to be. If it’s not, traction in the rear wheels will be compromised and the trailers could snake, causing an accident.

Nose weight is crucial to safe trailering. Once you know the nose weight of your car (it will be in your owner’s manual), you can work out the ratio of the rate to the tow vehicle to the towed load. For example, if you have an un-braked trailer (and just about every bike trailer will be un-braked), a Ford Focus Zetec 1.6 has a range of safe towing loads, depending on the model, between 300-625kg. Going beyond the manufacturer’s limits could easily constitute a dangerous driving charge if your trailer gets bent out of shape as a result of such actions.

Unfortunately, if you want to check if you are safe to tow, you are going to have to do some homework. You’ll need to know your tow vehicle’s limit for towing an un-braked trailer, the manufacturer’s published nose weight, the gross vehicle weight of the tow vehicle, and ensure the towed load does not exceed 750kg or the manufacturer’s maximum if lower on an un-braked trailer.

Also, the lighter your motorcycle trailer, the less crucial downforce/nose weight becomes. If you are towing a 750kg load behind a 1.1 tonne car, the load is about 68% of the weight of the towing vehicle. If you do not have weight pressing down through the towing hitch, when the trailer bounces the static force that goes through the hitch starts to vary. Three quarters of a tonne pulling 1.1 tonnes is clearly going to start lifting, even momentarily, the tow vehicle’s suspension, which means that your back wheels are more likely to break out, leading to snaking which can bend your vehicle out of shape and is the reason why you see cars on their roofs in the summer holidays as people are towing caravans without making these checks.

So, it is not as simple as going off and buying a motorcycle trailer, sticking your bike on and hoping for the best. 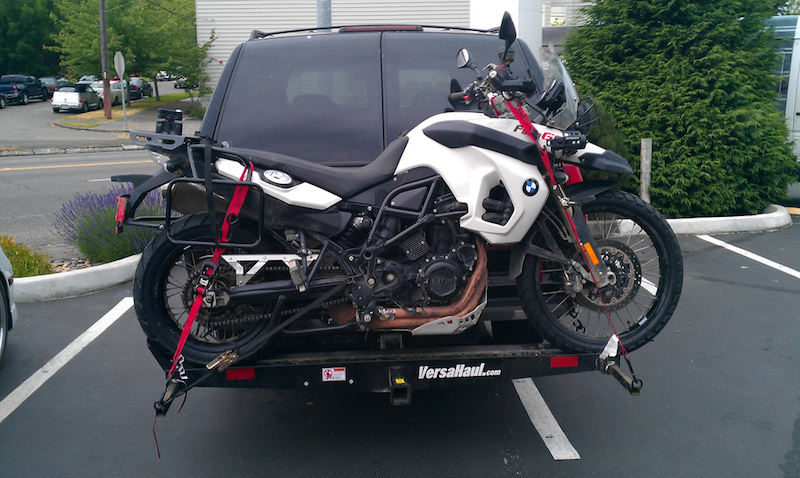 Finally, a word on racks. I have seen enduro bikes on the back of family cars and MPVs, even the ubiquitous VW T5 will have a dirt bike perched on the rack on the back. I own a T5, so I happen to know the maximum nose weight for my model is 80kg. I have a rack, which I know weighs 9kg, therefore if my bike weighs more than 71kg I cannot put it on a rack on the back of the van.

I’ve seen 160kg bikes on the back of a Renault Espace, with the front wheels virtually pawing the air and the rear suspension sat so low that the tyres are pretty much touching the arches. That was a crash waiting to happen, and any copper worth his salt will have that vehicle over and have the driver nicked.

Once you make the decision to transport your bike to the dirt in anything other than the back of a van, you need to do some thinking and research. Hitch and hope might work, and probably for a single dirt bike on a trailer you’re unlikely to go wrong, but a bit of homework will keep you on the right side of the law.