Not all XT's are Tenere's!

Anything goes, and mine's a Guinness.
Post Reply
40 posts

It's always seemed a bit odd to me that 2 friends of mine (including Mark R who posts on here) have had problems with the rear wheel bearing breaking up on their 660 R models while I don't know of anyone who's had similar problems with a Z?

Admittedly they're both dull heads who insist on loading their bikes up and riding them all over the place on crap roads but both of them religiously strip and grease those wheel bearings on a regular basis. The only reason I can think of is that the swinging arm on the R looks a bit flimsier than the one on the Z but it's something that they're both aware of and both carry spare wheel bearings and can change them in about 30 minutes at the side of the road.

I changed the front wheel, rear wheel and sprocket carrier bearings on my Tenere last winter and none of them showed any sign of wear at all and I'm certainly not as much of a zealot when it comes to routine maintenance as they are :whistle:
Top

Wouldn't it be a lot better if you started an 'XT' thread (a bit like the DR thread)?

i think i had my rear wheel bearing go on the Z at about 40k? just noticed some play in the one linkage bearing. bike has 57k on now.

a mate has a x version and i hate to ride it. wheel sizes are mismatched so it doesn't tip in nice (rear too wide for fashion sake i think). on the open road the wind blast is horrible and fueling is poor too. i couldn't remember which one was which so i did a quick Google image search and most of the pictures of R models have been modified with front screens and luggage racks :laugh: so basically a z :whistle: (thumbs)
each to his own. i don't think calling the z a soft roader is a slur cos its not made for full on competition but it does go off road quite well (with the right tyres on).
XT660Z

I like a bit of soft off roading :laugh:

I'M HERE FOR A GOOD TIME NOT A LONG TIME

:laugh: there is always some weirdo looking to spoil the statistics (thumbs)
XT660Z

redbikejohn wrote:on the open road the wind blast is horrible and fueling is poor too. i couldn't remember which one was which so i did a quick Google image search and most of the pictures of R models have been modified with front screens and luggage racks :laugh: so basically a z :whistle: (thumbs) each to his own.

I agree with everything you say, except I put a 22 litre tank on as well.... so more like the Z :p

However, at the end of the day it was cheaper to do this than buy a Z (at the time) while ending up with a lighter bike and most importantly.... not so tall for those of us that are vertically challenged. :silly:

On the wind blast, 100k/hr is pleasant with a slightly taller screen, 120k/hr is acceptable but 130+ is not for extended periods, for me.

I'm a fence sitter on the rest of the arguments here and I'm too scared to comment on the bearings as I have not had any issues (yet). A possible cause of rear bearing failure may be related to over-zealous packing out of the cush drive placing excess load on the bearings?

On the LGKS (Ligurische Grenzkammstraße - military road between Italy and France) last year as part of a four month wander and 12,000 miles. 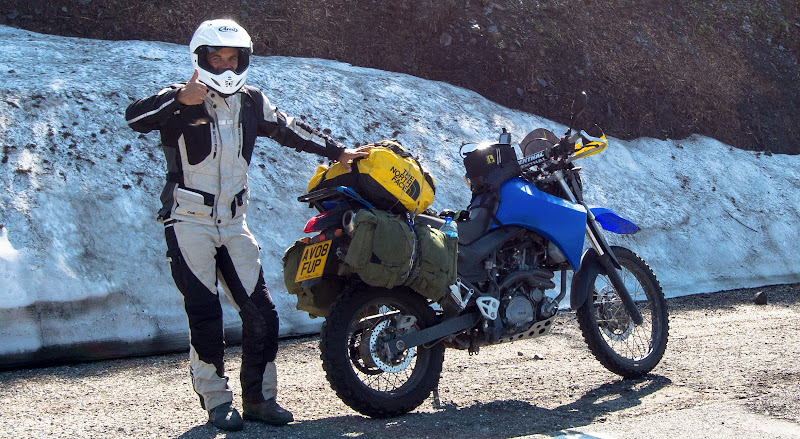 -Ralph- wrote: Yamaha didn't just bolt a load of extra bits onto an XT660R in 2008 to make it more appealing to the growing number of riders switching to adventure bikes then?

er... lets think about it for a little while...

Engine - yes, they are the same.
Badge - Yep they have similar badges, the wording is the same

So, what you are saying is that a MT06 (as it shares more components with the R than the Z does) is just an XT-R with some bit s bolted on ?

The X, R & Z are all great bikes at what they do. It's the OP and the conclusions drawn that are tosh,

I know all that, I was yanking your chain you numpty, that's why the post you quoted has got a big grinning smiley after it. The OP also had "Tongue firmly in cheek" written on it, so lets not have kittens about the "conclusions" in the OP either, OK? (thumbs)
"Luke, you're going to find that many of the truths we cling to depend greatly on our own point of view" - Obi-Wan Kenobi
Top

Would I have any of the XT series as a green lane/ trail bike?? Hell no to heavy and cheap components.

As a jack of all trades but master of none it's an ok bike for the one for all market. I would prob go for an R above a Z.


currently traveling the world on a CCM SR40
Top

If I was to buy one to go off road then I would swap the header pipes, like this one.

The number of times people refer to the DR250 - WHICH DR? SOHC or DOHC? Or perhaps the DR250-Z?
living an ordinary life in a non-ordinary way
Top
Post Reply
40 posts