Hello forum
Well I thought I'd start a thread on my Quadro4 as I transform if from city super scoot to all round adventurer. I'm a ways into the process so need to catch up a few things but it is only just getting going also. 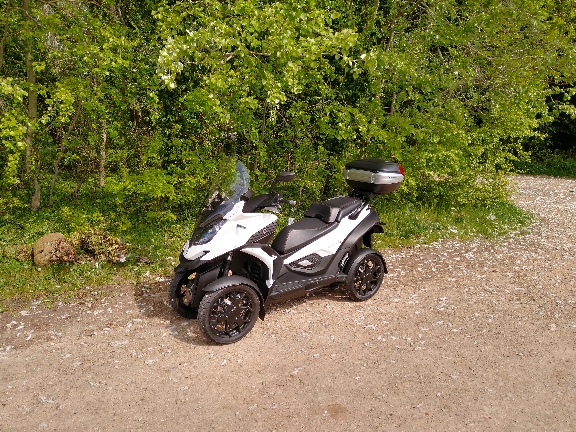 So this is a 350cc 4 wheeled leaning scooter, 4 wheel combined brakes, CVT transmission, large comfy seats and under seat storage. Not the fastest cruiser due to its (current) weight and power output but for non-motorway touring is brilliant and totally confidence inspiring regardless of poorly surfaced roads or tracks.

Off- road prowess is under development. It has 14" wheels, modest ground clearance but the leaning suspension handles undulating bumps and surfaces brilliantly at low speed. Very low speed technical stuff is challenging due to weight and the standard clutch but also in development. 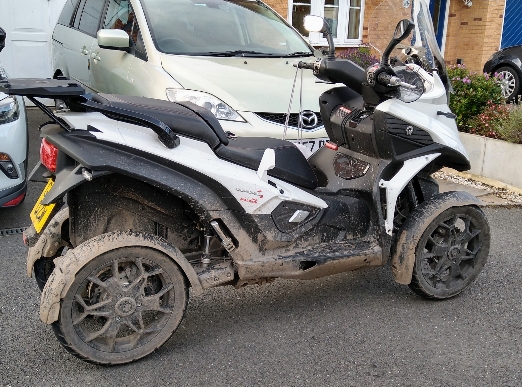 This is not a off-road racer or Dakar Rally bike, let's describe it as a soft roader. And every day commuting machine.

I will add to this thread and the first posts as I go. Happy to receive feedback and constructive inputs from forum members.

So the engine is shared with (and made by) Aeon quads' Cobra 350 and a modest workhorse made in Taiwan to Japanese type standards but at Chinese type prices so not bad. But modification options are limited. I hope to fit a bespoke exhaust system and improve the intake performance at least. And a dealer in Italy actually has a stripped down bike built for off road riding and has increased engine capacity to 450cc with head work etc to match. Interesting and hopefully I'll find out some more details. But I'm not chasing max power, more useable midrange.

The biggest weakness in performance is the standard clutch. Not because it is poor quality or performance but it is not great and the increased weight of the Quadro makes harder work for the clutch. But I'm speaking with TechPulley to make me a sample PowerClutch for testing and hopefully they can offer it as an aftermarket. Fallback is modifying the clutch bell from a Piaggio/Aprilia scoot and fitting it's larger clutch. I have checked mostly I'm confident it will fit.

Next to the complexities of the transmission and the optimal operation of the CVT. This varies for different use cases so wanting technical low speed prowess for off road and being able to gun it and cruise down the motorway are a wide range to accommodate. The clutch plays a large part of this puzzle, then the variator (power/drive/engine side of CVT) dictates gearing range and the roller weights determine the engine speed and rate of acceleration in relation to load (weight of vehicle, incline etc). So balancing these elements for best all round performance is tricky.

But a Suzuki Burgman variator fits the Quadro and gives 10-15% higher speed so I have bought one to try.

Then fitting the new clutch will allow me to adjust engagement speed so the clutch is trying to lock quickly and give strong initial take off for off road with minimal slipping and heat.

Finally reducing the variator roller weights will give stronger low speed gearing and acceleration and we will see if it impedes top speed given the same gearing.

I have a 56ltr Givi top box and could throw soft panniers and a saddle bag on too if needed. I could probably fit a kitchen sink on the back seat too but I prefer to travel light. No no major luggage planned. Plus I like to keep it narrow for filtering so will avoid paniers if possible. 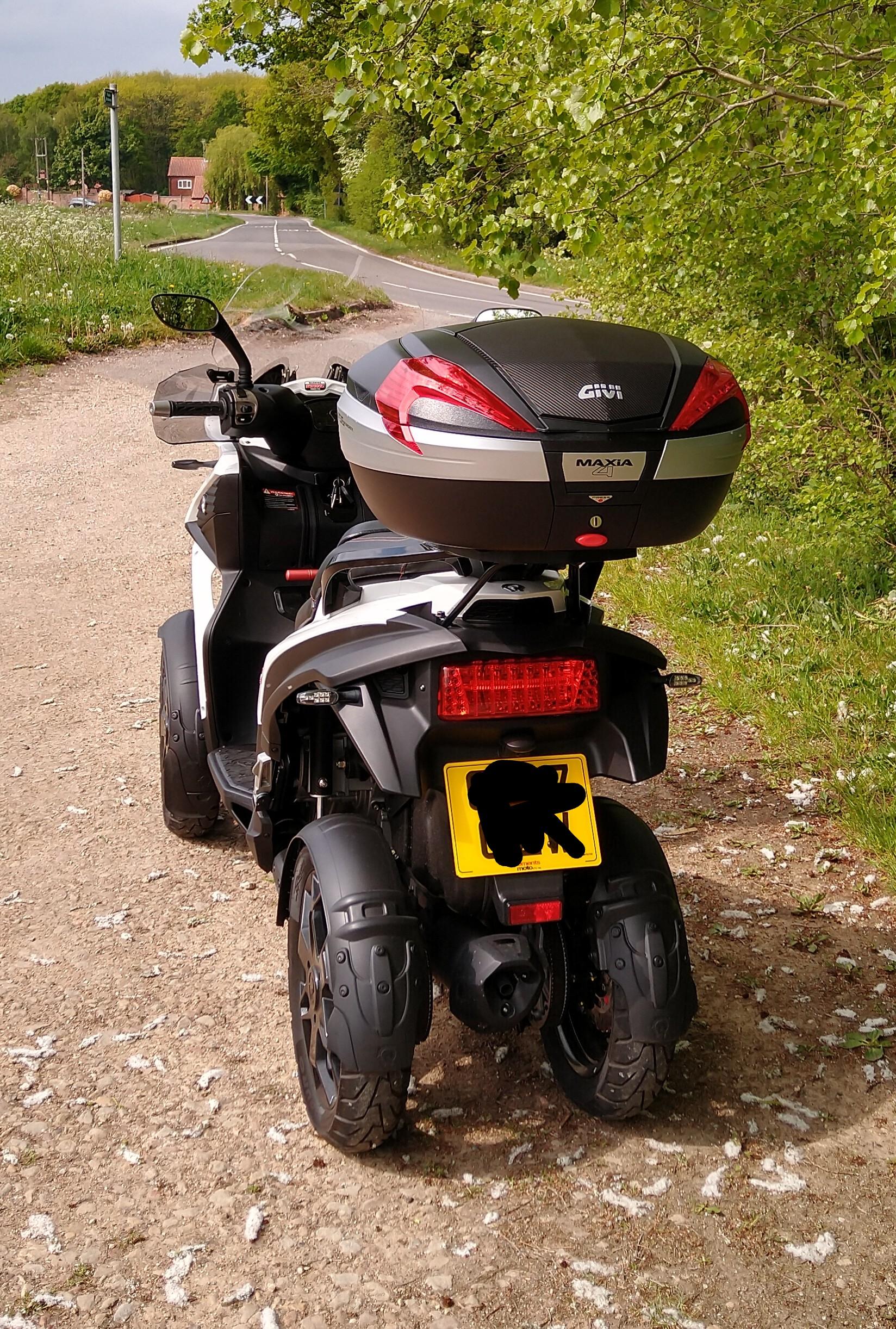 So I have an apron leg cover for the Q4 but haven't fitted it yet just because the bike hasn't been ridden much and no commuting this year unfortunately.

But in preparation for cold weather riding I had the idea of venting the warm radiator airflow under the leg cover like simple heating. So installed a simple rotary vent from Car Builder Solutions. When the bash plate is fitted the underside will be closed off and create good pressure behind the radiator to vent up.

Next as I have done with all my bikes is I fitted a medical grade gel pad under the seat cover sandwiched under the foam pad in a carved out pocket. I used the opportunity to raise and angle the seat more backward also as I'm rather large and needed the leg room. I also reduced the size of the butt pad to give more length to the seat space. You cannot see the change unless beside a stock seat but the feel and comfort are brilliant now.

I know it's frowned on and potentially illegal but I removed the daft foot brake. The Q4 is classed as a tricycle based on the width of the rear track being less than 480mm but meaning it must have a foot brake. Well there's no room for my size 12 boots then. So that got binned (Stored) to give room and reroute the brakes for combined braking on the right lever and rear only on the left (for off roading) and much sharper brake feel with less plumbing going on. Plus my first weight saving. 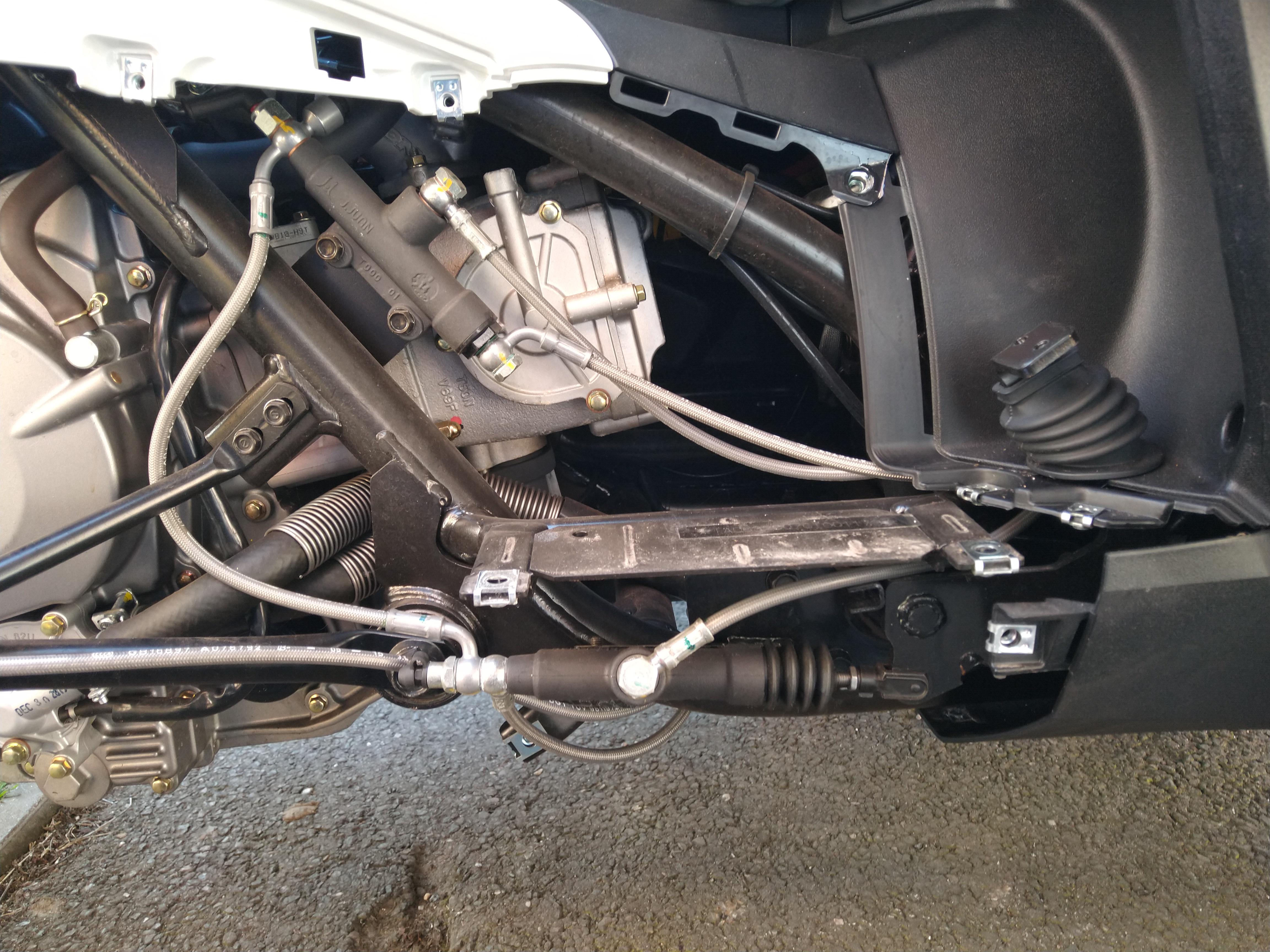 I also fitted wind deflecting hand guards though I'm now contemplating more robust guards if I do more serious off roading but the need hasn't arisen for that yet. Much less likelihood of dropping the bike...

And for Christmas I'm getting (or fitting) combination running lights and indicators that do DRL and brake functions as well as indicating, for a bit more visibility. No pics yet...

I'm also getting a control module that activates the brake lights with strong engine deceleration. I know many feel a rider should use the brakes to show they're slowing down etc but I try to maintain momentum and limit how much braking I have to do, for expediency and efficiency and not waste braking life so I use the engine to slow a lot and I was surprised by how well the Q4 slows by engine braking. This is just a safety factor in my mind. I'm contemplating fitting a brake light flasher module also so that when I actually also grab the brake lever the lights will flash to warn drivers behind further. 4 wheel braking is rather effective after all...

I fitted LED dipped (with cooling) and main beam bulbs which transformed the light output and are fantastic. I'm not a fan of having 4 sets of LED spots to blind every living thing in my path and these are more than effective. No pics except light output colour is cooler than the stock halogen lights and matches the simple LED running lights which is a bonus.

The next mod I started was to buy a similar set of adjustable brake levers and I looked at modifying them to fit but the work involved would have kept me from the weekend ride so that got put on the back burner. But I'm itching to get that done as it'll really help the 2 finger braking control with combined braking on the right lever.

Update, levers modified and fitted (but handlebars not reassembled yet...) Levers feel great and work well, ready to test ride once the rest of the bike is back together.

So first thing was fit a Issota clear adjustable screen with satnav mount bracket and a Quadlock phone mount. I figured do everything through the phone as everything is online these days and it's paired to my Sena headset so ideal.

Then needed power so I replaced the 12v socket with a dual USB/USB-C and volt meter power supply to power the phone (2A) and any accessories plus keep an eye on the battery condition.

So first thing to note, my bike came with Duro road tyres, perfectly acceptable for the black top but hardly anything you'd consider acceptable for dirt or off road riding. Yet they or the bike performed admirably until I was on wet grass and mud, then it was just spinning and sliding round... I note no falling over though! Therefore I did my searching and options were trail bias scooter tyres from Heidenau or various brands' winter tyre offerings. I searched and researched feedback/reviews and decided given the temperate British climate and impending winter, along with their aggressive tread pattern, to try Anlas Winter Grip 2 tyres. They have an impressive variety of tyres and sizes and increasing praise from customers for their products, along with a significant number of European customers' feedback saying they use the Winter Grip 2 tyres all year round. Perfect.

I bought a front hub from a breaker and made my own balancing jig and balanced all wheels to within perfection. Took a test ride so far on wet, dry cold and dirty tarmac and they grip amazingly, are going to be brilliant off road too!

Also following my first excursion off road into inadvertently rugged rocky trails, I'm building a full length chassis / sump guard to protect frame rails, exhaust and engine from being bashed and hammered on. See later posts, but I started the CAD for the skid plate, that's Cardboard Aided Design

Worth noting that as part of simplifying the braking system and removing the stupid unusable foot pedal, I reconfigured the combined brakes to have all brakes on right lever and rear only on the left. This was fantastic in slippery off road conditions already and I'm so glad I did it.

Finally (for now) one of the challenges of a CVT is it is essentially air cooled, not waterproof and temperature sensitive. So of course on the first river crossing I attempted I drowned the damn thing, sucked water in which immediately cooled and wet the clutch and rendered it useless and I had to push the hike backwards out the water and let it drain and warm up again. So I designed (and redesigned) a snorkel intake for the CVT housing to route the air intake high up behind the passenger seat. I'm using reinforced pipe to prevent collapse also as the length is about long and high rpm will move lots of air through the CVT meaning strong vacuum through the pipe.

Another placeholder just in case...

To save me trawling through info I'm adding placeholders.

Nearly all the placeholders done