So, in the last 10,000 miles on the little CRF rally, what's happened, what went well and what's gone wrong.
During the first winter, after the rear tyre was all but worn out (3500 miles), I removed both the standard tyres,and replaced them with Heidenau K60's and I have to say I'm very pleased with them. Good consistent grip and stability on the road, with enough bite for a bit of light trail riding. Not great in mud, something more specialised is required for that, but for Road and mountain tracks, wet or dry they are excellent for me. I am now on my second rear, the first having worn down to 2mm in the centre after 6500 miles. At just over £70 a tyre I'm happy they are good value. The front is less than 1/3 worn.
Mechanically, nothing has gone wrong. From slogging along trails to happily buzzing up the motorway at an indicated 75, (really 68) it's proved to be solid and reliable. It's not fast, but is capable of keeping up with traffic and taking sensible overtaking opportunities. Being a small engine you're up and down the 'box a bit, but it's a pleasure to use and one of the slickest I've ever used.
The engine is reasonably smooth and definitely improved as the miles increased. It's a single so you know it's running, but for me it's not intrusive and that's after a few 450 to 500 mile days. It's at it's best between 4000 and 8500 rpm. It will run as low as 3000, but you need a gentle throttle hand to avoid engine 'shunt' on acceleration. I find running it up to 10500 rpm is not really necessary unless you want to avoid a gear change during an overtake.
The first (8000 mile) service was £89:00, it's just an oil change. Once the warranty is out next April all the mechanising will be down to me.
I did have had a new front brake disc under warranty, but that might have a bit (ok a lot) to do with me whizzing round mountain twisties in France in the company of some sports bikes. The disc was blue

. You could argue it should be able to cope, but I put it down to self inflicted injury. Oh and the ABS is excellent and works well.
In terms of consumables I've gone through two rear tyres and one front, brake pads are still fine, but I did pay extra for new fronts when the disc was changed at 8000 miles. The originals were about 1/2 worn. I've fitted a new chain and sprocket set at 9500 miles, which I was a bit surprised at, but with no Cush drive on the rear wheel and being as singles give chains a harder time of it I might just have to accept it. It will be interesting to see how long the top quality DID chain will last compared to the OEM one.
Over the period it's averaged between 85 to 90 mpg. I can get over 190 miles out of a tank and when I have there's still a bit over a litre left in it.
Comfort wise, it's no Goldwing, but is ok for about 120 to 150 miles in one hit now I've fitted the sheepskin seat cover to it. I can hop off for 10 minutes and be ready to do it all again, so not too bad. Certainly the ergonomics are excellent for me (6'1" 84kg 34" inside leg), but the seat is an inch taller than that on an Africa twin, so it's not for everyone.
The suspension is a bit too soft but it just glides over road imperfections and speed bumps and it's been ok for me. It's ideal for the state of our current roads. The suspension is a budget job and I know it's no KTM though. For me it responds best to gentle riding off road and can get in a bit of a knot if you try belting along. Currently saving for the YSS rear shock.
The fairing and screen are also very effective, and mine's been improved further by the addition of an adjustable air blade at the top.
Overall, an excellent lightweight bike that has served me well over some long distances (2800 miles Bilbao to the Normandy beaches over 17 days in France). It can carry all my kit easily for camping weekends and hotelling (is that a word

) over longer periods. I have a simple rack on the back from Honda Thailand and a tank bag system I made myself. I have a plan and have just ordered the material to make a pannier frame using bits of a Thule kit and their matching panniers for mountain bikes.
Finally, the quality of finish seems very good, and is holding up well, despite what I've thrown at it and occasionally thrown it at on a trail

. (I have found there are two sorts of trail riders, those that have fallen down, and those that are about to

). And you can pick it up easily. A good, solid, old school traillie, that can tour, scratch, nip to the shops and bounce along off road fairly well while revealing it's and the riders limited abilities.

And it's been very cheap to run, I'm still enjoying it. 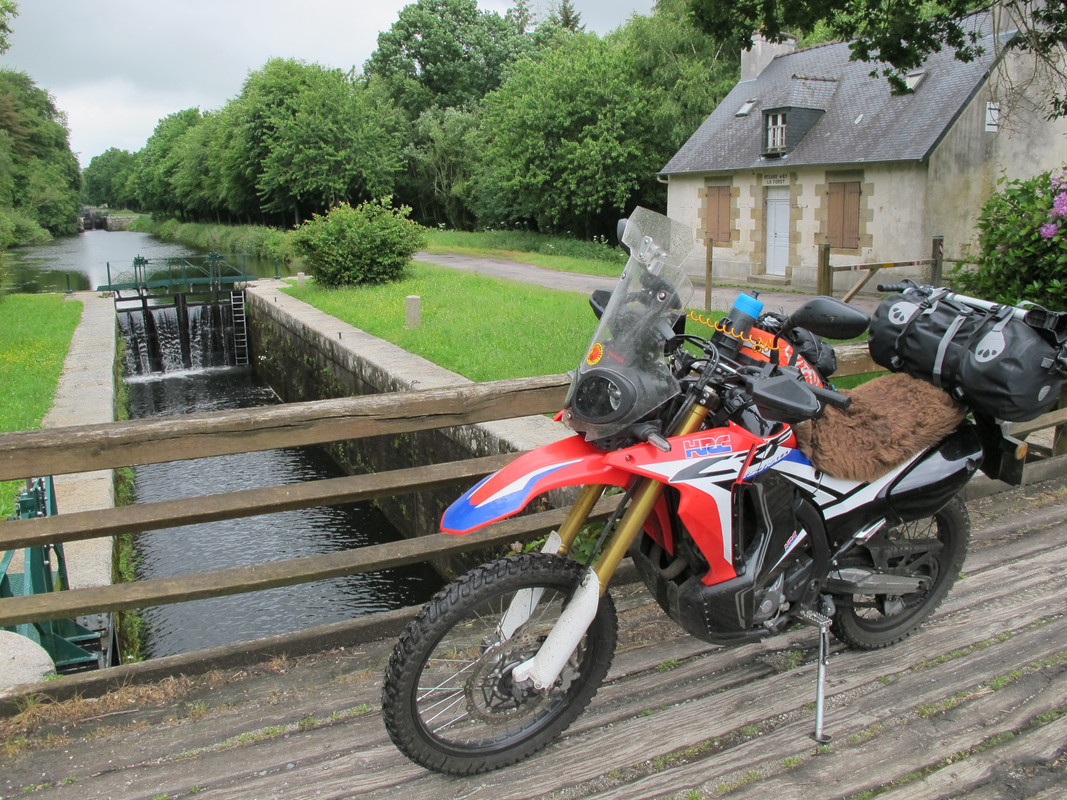 Thanks for that, very interesting
We buy things we don't need

With money we don't have

good update ..i think the rally is a ace little bike

had mine 18 months now and i have zero intention of moving it on ...ithink its somtimes unfairly compaared to ktm 250s husky 250s ectect for its off road performace and its never going to win ...
but compare it too the likes of a klr650 tenere serteo as a longer distance travel bike its surprisingly good ...its a bit heavy and slow steering and has a limit off road but its very rare i feel its a big problem ...i really enjoy its road manners its sweet handling super stable and doesnt feel like smaller bike at all ..its not fast or anything but as you know it has a knack of being enough to make decent progress ive got similar milage around 11.000 and zero problems of any kind /

there growing in our group scooby cowling and bob one leg have all taken the plunge ..and they really do like em .....suspenssion needs a bit of help off road but failing that for the money they are hard to knock 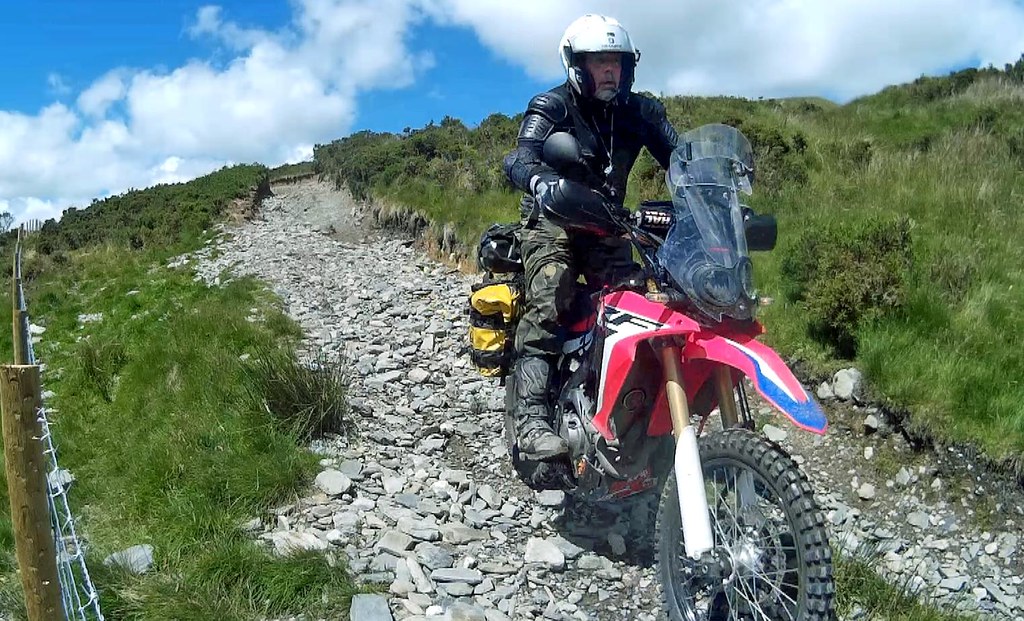 rally by minkyhead56, on Flickr
whats the wether forcast ..wheres me map
Top

Interesting and very positive reports on the Rally.
I have the CRF250L and really pleased with it on the trails and some road use.
Top

Helpful review. I am looking at swapping my KTM Freeride and this is high on my list of options.

thanks for going to the trouble
Top

Seems like a nice little bike. I wonder if the new 450 will be equally well reviewed

Good write up dude. Nice one. The rally version is a super looking bike and will keep going and going with little expense.

Yeah I like the look of it as well but as said the suspension seems very lacking! im 6ft 2" and around 110kg with all my gear on so when I sat on one the rear mudguard was nearly on the tyre lol...But for the money it seems a good buy, and once a 'fat boy' spring is installed I could be tempted hehe..

Thanks for your write up very informative.

Thanks for posting, I'm loving mine and will be keeping it and sticking some K60s on.
And now, Harry, let us step out into the night and pursue that flighty temptress, adventure.