Where you've been and what you done
Post Reply
113 posts

The next morning as usual was a nice easy start to the day and our last full day in Mongolia. We were heading north from Khovd to Ulgii. We set off to glorious sunshine again!

The scenery was spectacular. The riding though was not, look at all that sand. 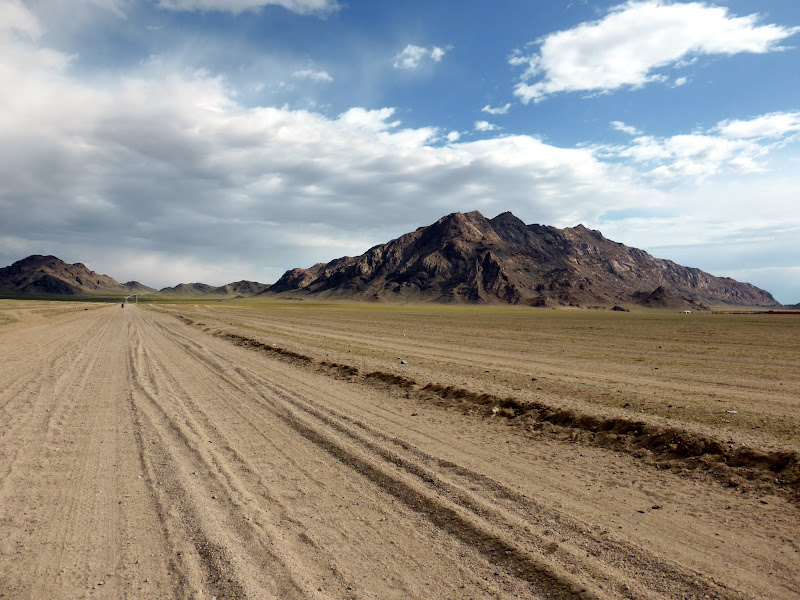 Any computer geeks think this sign reminds them of something? 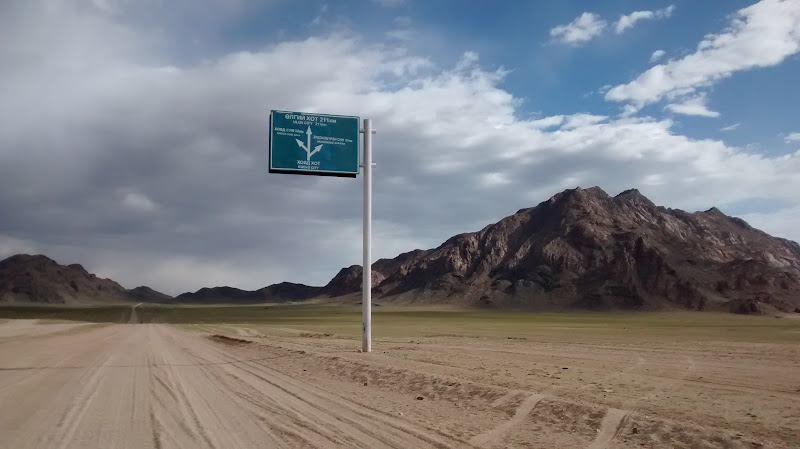 Soon though the sandy tracks opened up and we had a selection of ones to chose from. What brilliant riding, this is why we're here. 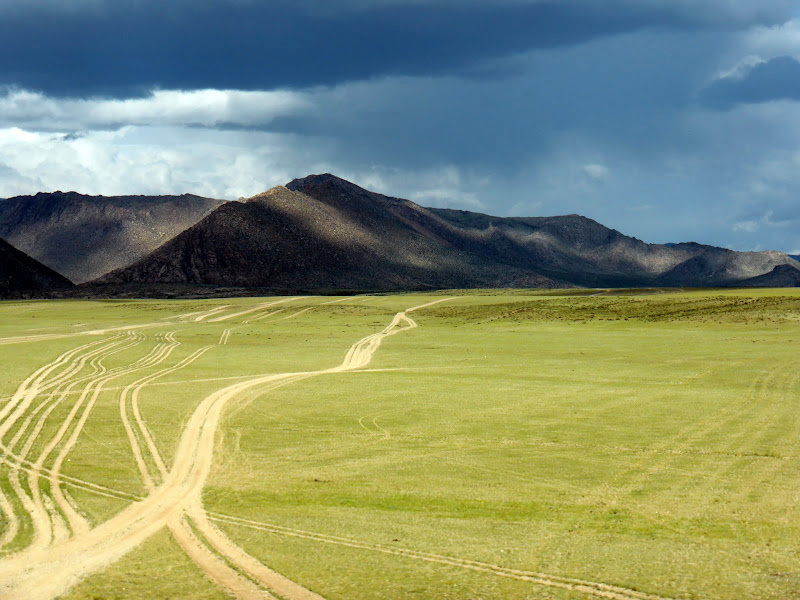 Even the flora and fauna was beautiful. 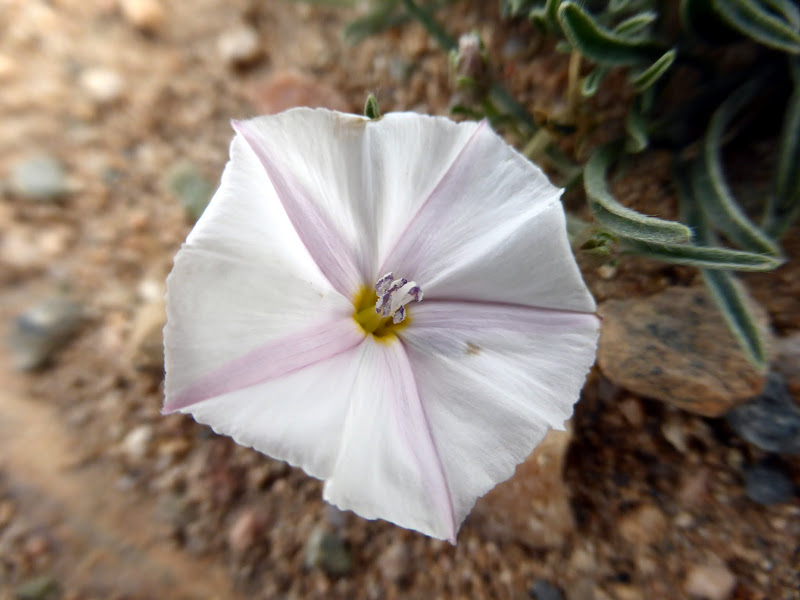 Paul and I were taking our own little tracks and often a few hundred yards next to each other and enjoying the riding and scenery. It did get a little rutted in places and we ended up shuffling around a bit to find the nice tracks but it was nowhere as bad as before.

In the distance we saw a headlight coming towards us and bumped into this chap on his 250 all the way from Hungary. I can't remember his name but he was a really nice guy. If i remember correctly he said that he had been caught in the mother of all sandstorms and had an awful night trying to keep his tent down and from blowing away. He was happy to hear that Khovd wasn't far away and that there was a reasonable hotel he could decamp at. He also warned us of a water crossing ahead, saying it came to about the top of his wheels. 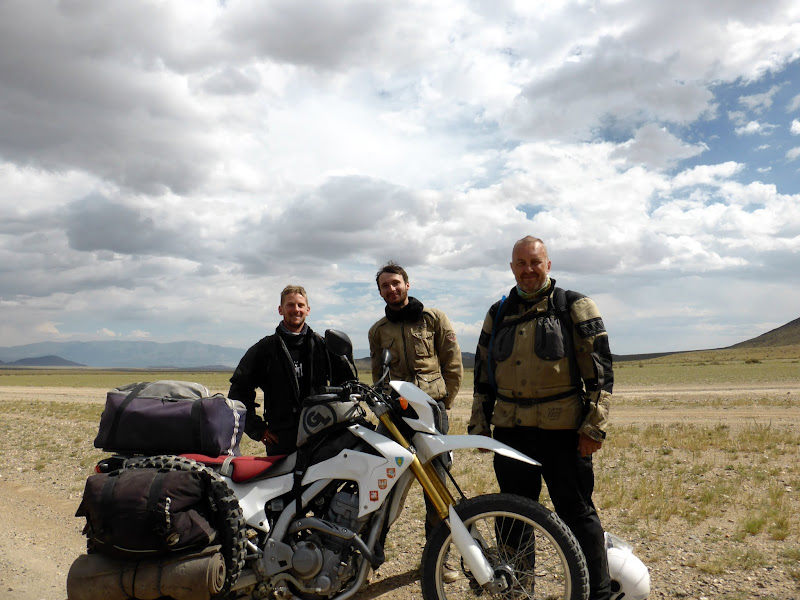 We carried on and sure enough got to the water crossing. It doesn't show on the photos but it was about 3/4 wheel deep and fast flowing. Paul and I didn't want to risk anything so we carried our luggage across. Paul's should have been waterproof however his falls (Did I mention them?

) has knocked his one pannier badly out of shape and it didn't seal anymore.

So we did a few walks across with out kit and then pushed my bike across first. Me upstream and Paul downstream. Even my little 650 was being pushed downstream and it was hard work. For Paul's we used the same technique, this time though starting about a meter or two further upstream as downstream was a little drop which would have been a pain if we got too close to it. We got the bike across and just before I went back to fetch the final bits, a big truck came across. The passenger jumped out and grabbed out stuff and brought it across in the truck's cab. Nice guy. 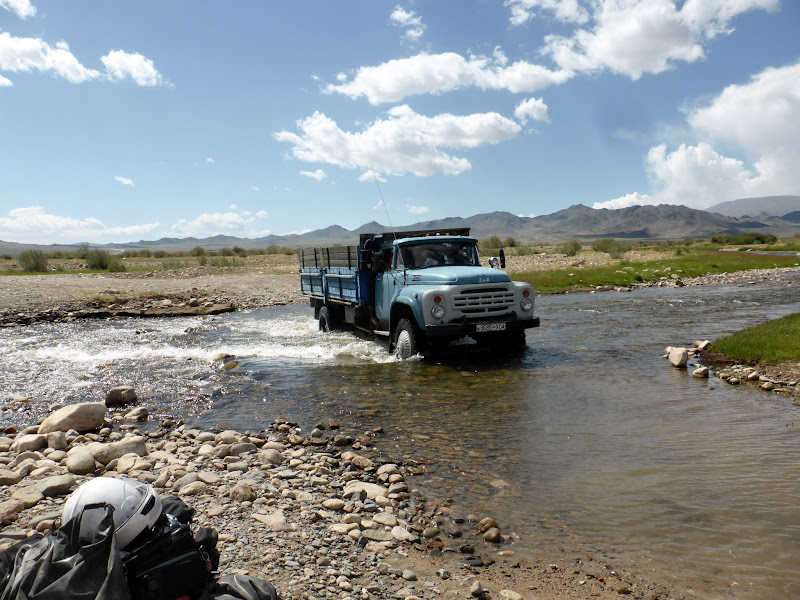 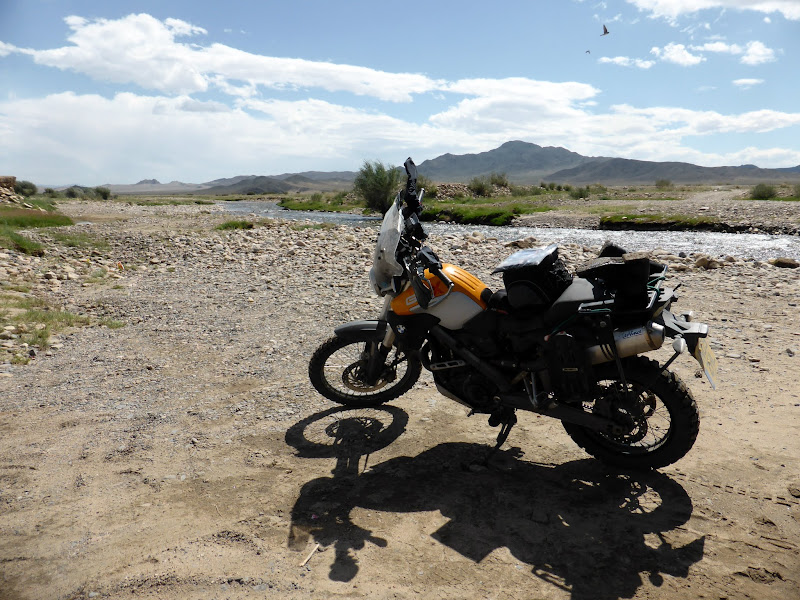 We headed off and enjoyed the scenery. At one point we were riding pretty high, I'll get it wrong I am sure but 5,500m sounds about right? I will check it on the GPS later. 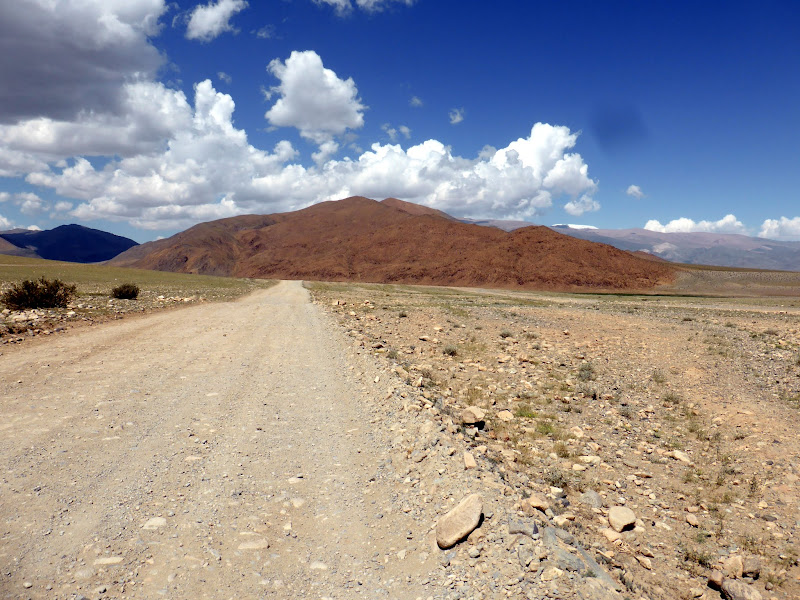 It had dropped about 10 or 15 degrees c. It was also horribly windy, very very windy! At one point we passed 3 Spanish cyclists who were having to pedal even on the downhills, that's how windy it was.

We were riding in a canyon with a river to our right. It was pretty desolate and bleak, but we did eventually find a very small shop where we took a few minutes out to relax. I need one of these trucks in my life! 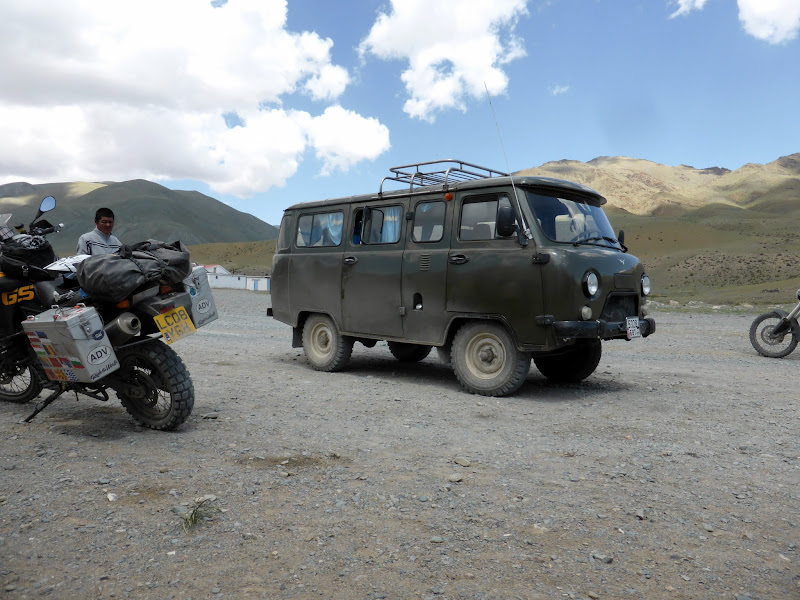 Snow caps were getting closer as we got higher. 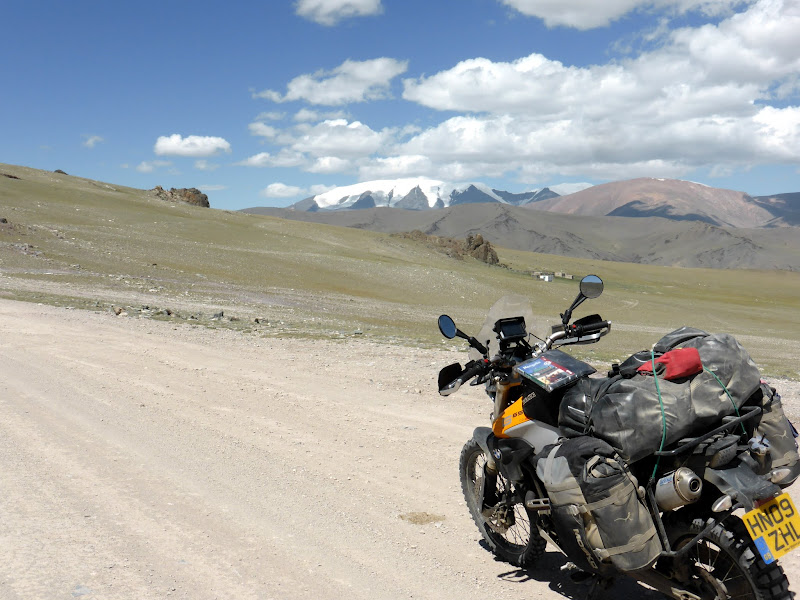 But so was evidence of dryer times! 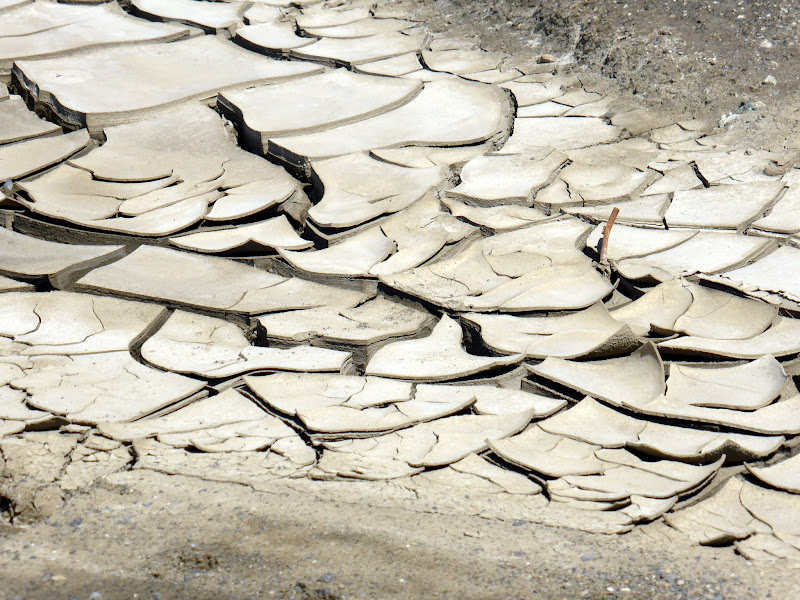 We then arrived at a stream laden, high altitude area. Lots and lots of little stream crossings. It was actually quite fun.

As Paul stopped on the side to make sure I got across one crossing safely guess what happened. 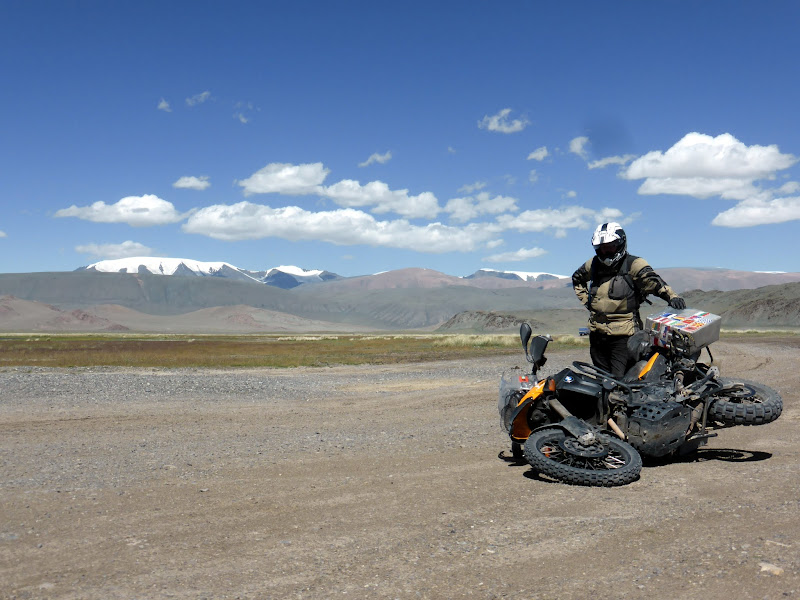 Fall number 11 I think. In Paul's defence though, the wind was howling and in a moment of concentration lapse the wind had caught him off guard and sent him over enough for him to decide it wasn't worth saving and possibly hurting his already damaged knee and he let it go down. Clever move.

Always time to find time for scenic photos though. Not much smiling from me though, I was tired. 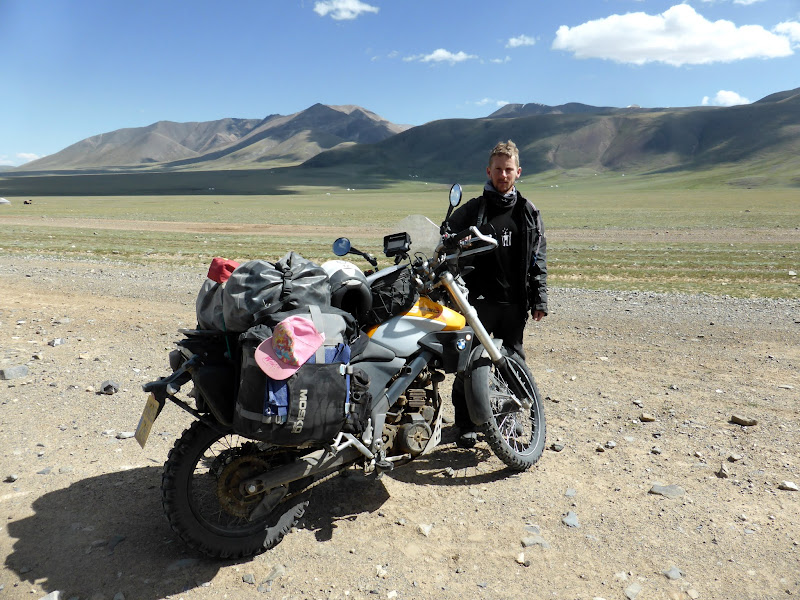 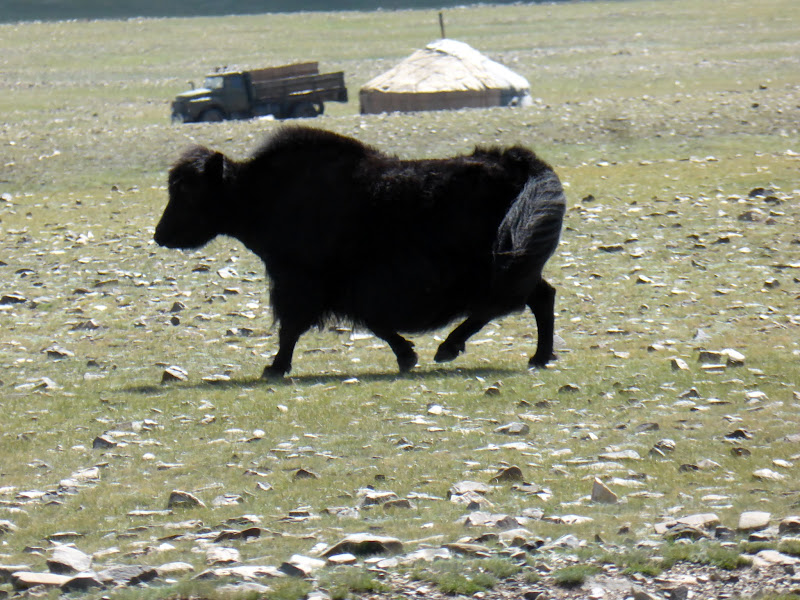 We high altitude, lots of concentration with river crossing and general fatigue (Incl upset stomachs) was taking its toll slowly and the conditions deteriorated. Howling wind, sometimes a bit chilly and rubbish tracks again were soon a thing of the past though as we came across this most beautiful thing. 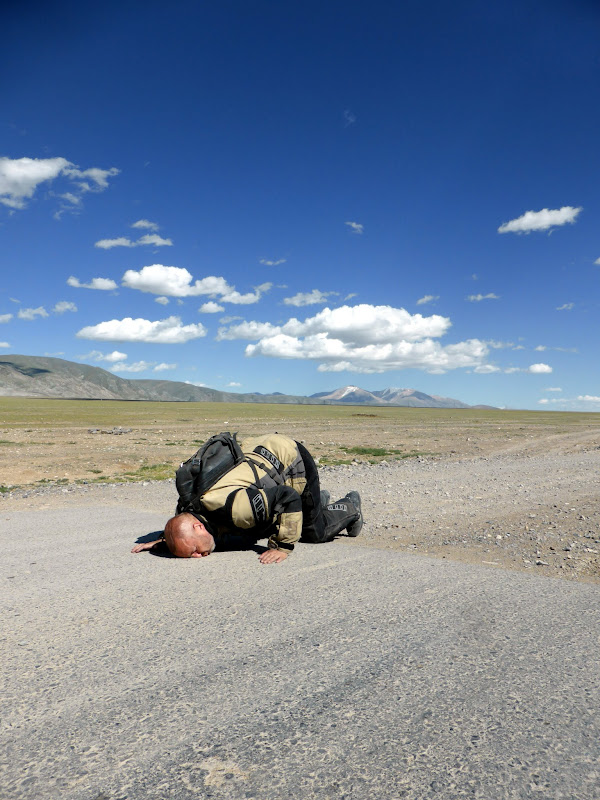 We headed into Ulgii and found the only hotel in town I think. It was full of foreigners. In fact when Paul walked into the lobby and politely and cheerfully said "Hello!" he got 1 x Hello from the lady behind the counter and 5 x Hello's from guests in the lobby with Irish, Polish, Russian, American and british accents! Quite amusing.

We ended up getting two rooms as none had twin beds. I had a "suite" which sounds posher than it was. At least I was on the top floor whereas Paul was in the middle floor and was kept awake by some Americans have a domestic!

We found a Turkish restaurant in the town and ate there. It was very nice indeed! As always, early night as in the morning we wanted to be out of the hotel at 7am to blast it to the border. This was a Sunday night and the border had been closed all weekend so we wanted to get there as close to 9am as possible on the Monday morning to get across into Russia and continue into the picturesque Altai mountains.
Top

Nine and final! B)
Top

Brilliant RR of a fantastic trip. Thanks for taking the time for posting.
Top

Nine and final! B)

Nine and final! B)

Hopefully do the remaining few entries this week.
Top

The next morning, at the crack of dawn, Paul and I were up and packing up the bikes. But not before scaring the daylights of the receptionist who was sleeping on the setee in reception. Sorry about that.

We wanted an early start to get to the border as it had been closed over the weekend as per normal. The ride up there was pleasant but chilly. Paul showed off with his heated grips. I showed off by shivering! But once the sun came up it warmed up nicely and we arrived at the border about 30 mins before its scheduled opening time. 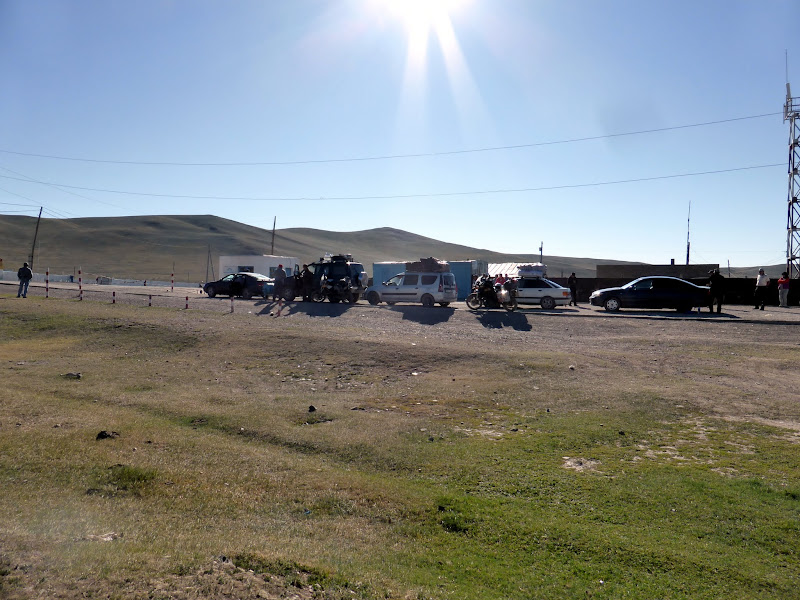 We rode up past the queue of cars and parked near the front behind some Russians in a 4x4. There was a Mongolian border official who was absolutely insane. He was about 5 foot tall and a skinny little thing and obviously had short man syndrome. He was going absolutely mental at the Russians in front of us for some unknown reason. It was hilarious as the Russian was about 6 foot tall and stocky with this little man shouting at him. The Russian didn't give a damn, he just shrugged. This carried on for ages but eventually we were let through about an hour late.

Paperwork all done and stamped out of Mongolia, it was time for the 5-10 mile ride through no man's land to the Russian side. This is probably where the disaster happened .... I lost my pink cap somewhere along the way! I blame the Mongolians for making me open my luggage. It was a sad time when I realised this and we had a minutes silence.

A sneaky photo of the Russian side. 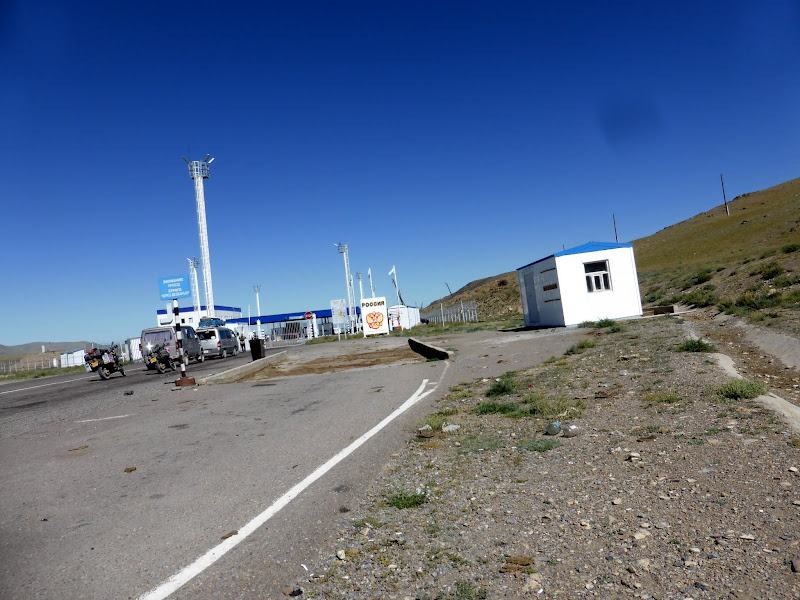 A few formalities there and we also said hello to a couple of British guys (Father and Son) on KTMs. They were heading the other way. We were back in Russia and civilisation.

We were in the Altai mountains and the plan was 2 days to shoot North West, then South West into Kazakhstan. We'd lost some time so far and needed to make it up.

The ride through the Altai was lovely. Decent tarmac, nice weather and great scenery. 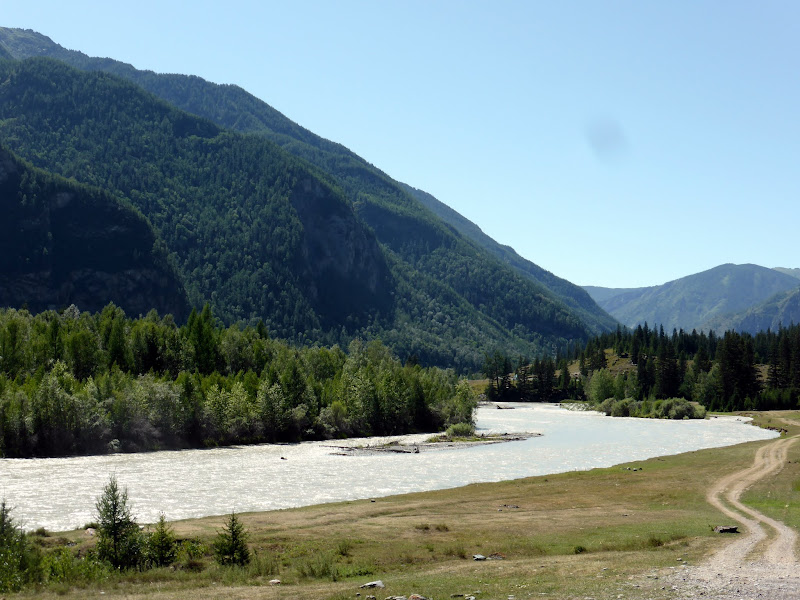 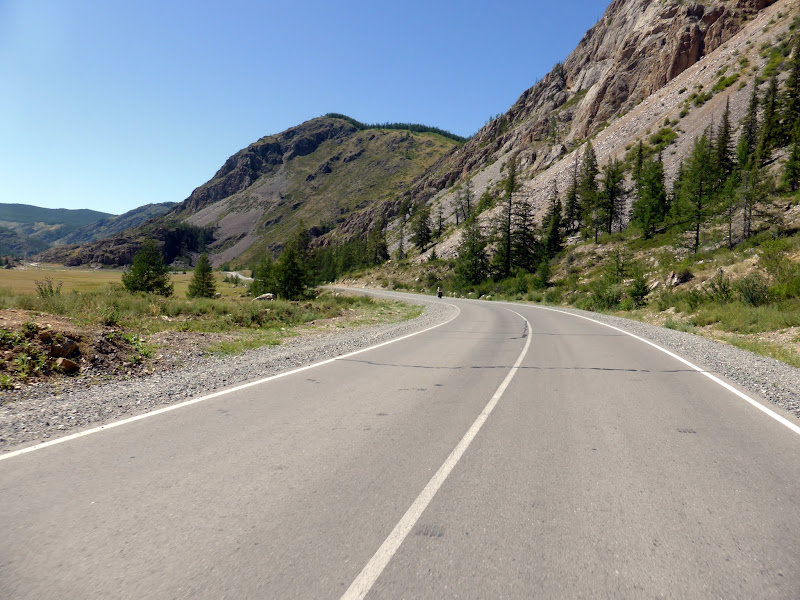 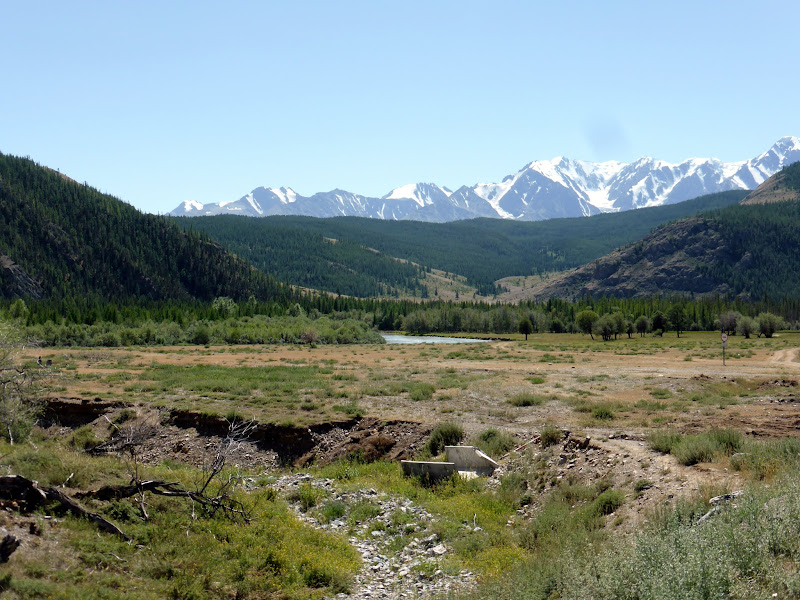 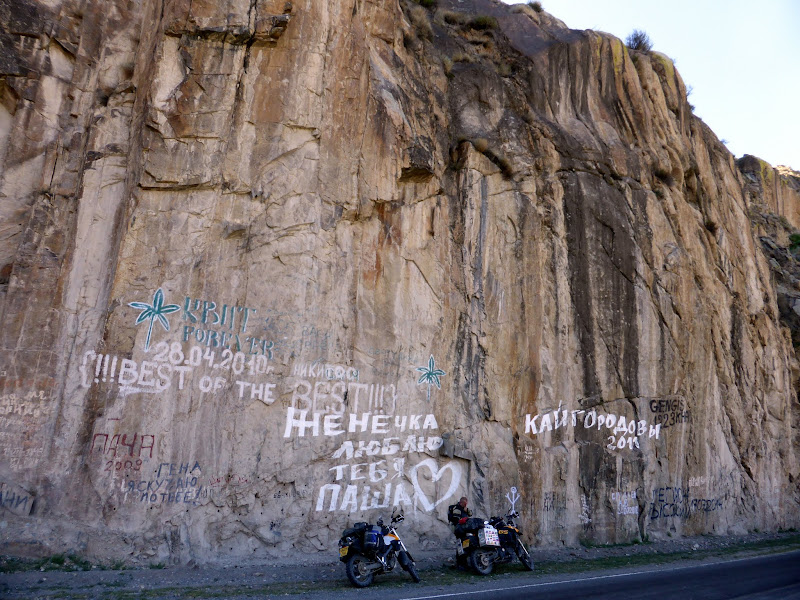 We hoped to make Barnaul but it wasn't going to happen. Thankfully we had the waypoint GPS coordinates of a hotel. We'd have never guessed it was a hotel/home stay type place from the roadside. But what an amazing find!

Through the power of sign language we got ourselves a room and safe parking for the bikes. There was no restaurant nearby however Paul and I took a walk to the local shop and managed to get some pasta that we cooked for dinner in the communal area. Ate it at the side of the river on a fantastic evening. 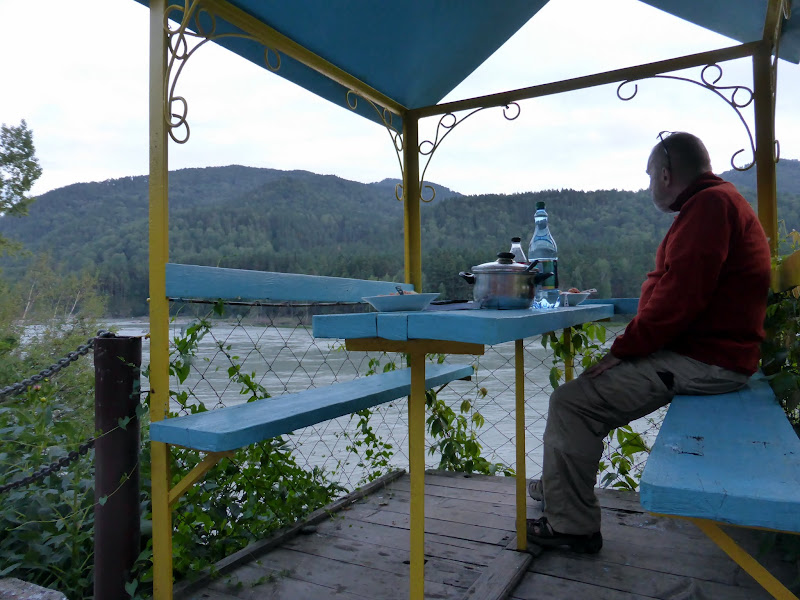 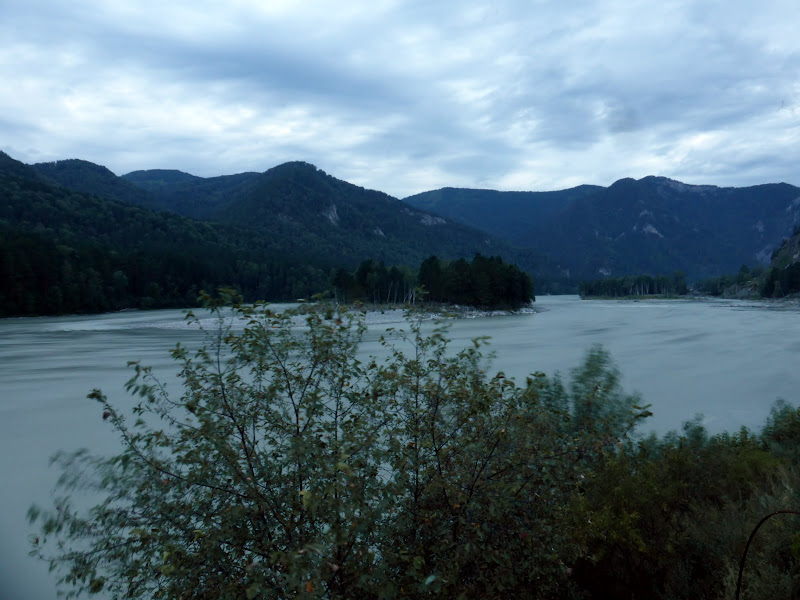 Our room for the night 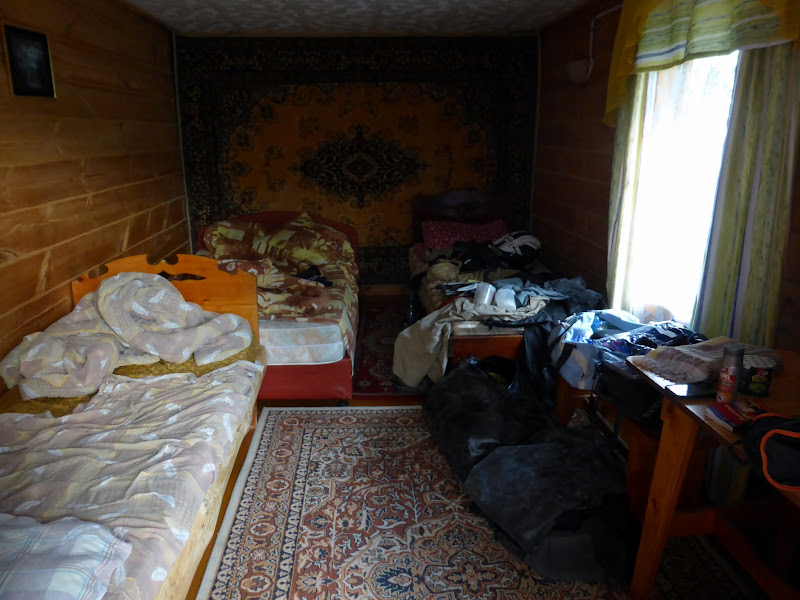 The next day when we came to leave the lady running the place was sad to see us go and even gave us a carrier bag of homegrown cucumbers. What a lovely lady and place. 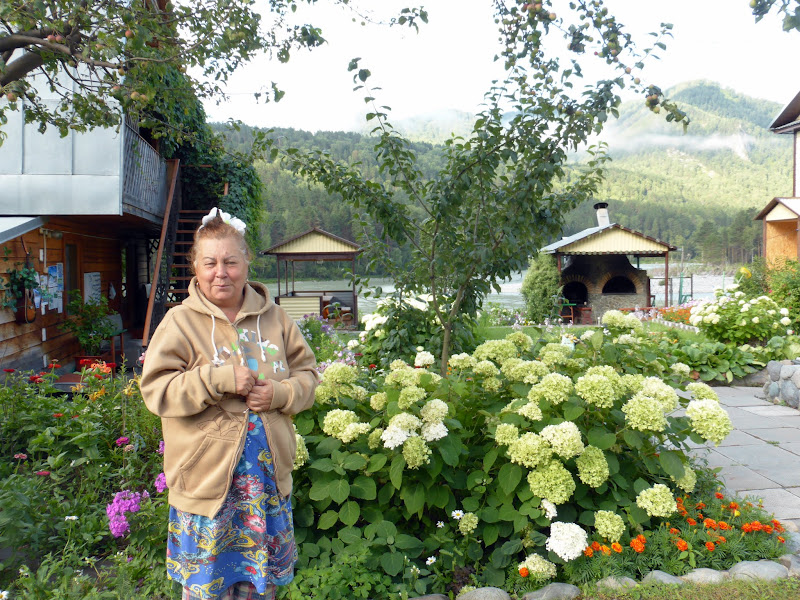 The next day was another slog to get as many miles done as we could and get close to the Kazakhstan border. We did it without any drama and I discovered Russian Pringles, bloody hell they burnt! 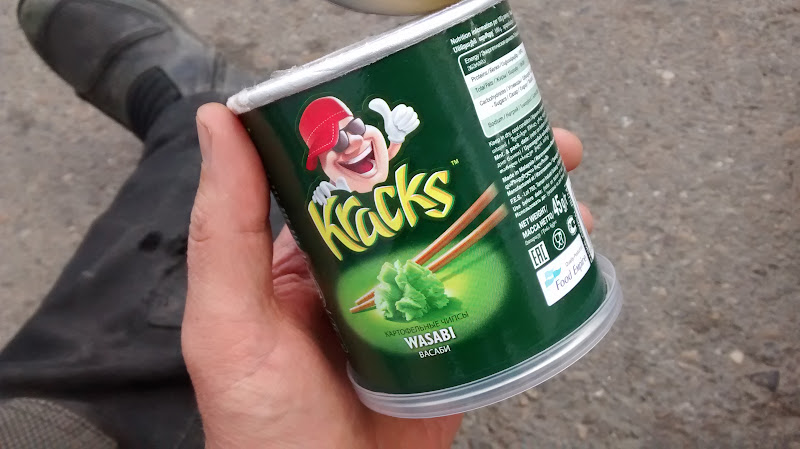 The city we arrived in was ok but the hotels wouldn't take us, they were all full (or so they said) but we eventually found a place called Karat18 or similar and got looked after by the two ladies running the place. We got put in what I assume was a bridal suite and although Paul and I are friends, we're not THAT close, so I was on the floor.

The mirrored ceiling and blinged out bathroom were different! 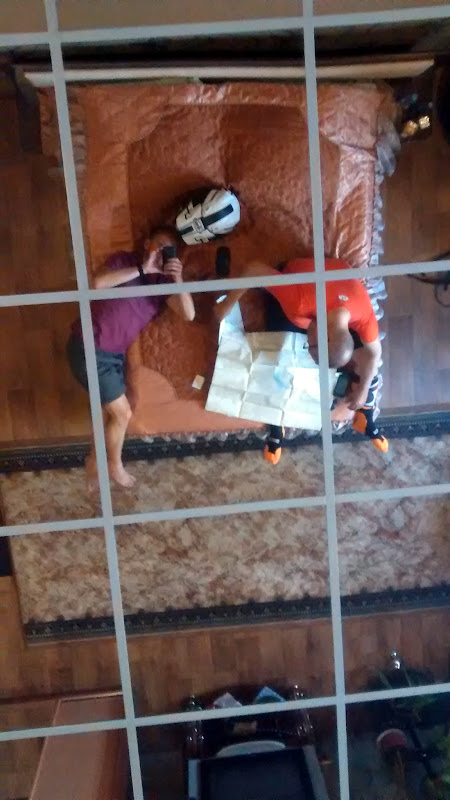 For dinner I can't remember what we did actually. I think we raided the local cafe. Anyhow, it was an early night again as in the morning we'd have the border into Kazakhstan to deal with.
Top

Nice to read another installment !
It'll end in tears I tells ya.
Top
Post Reply
113 posts

Users browsing this forum: No registered users and 44 guests