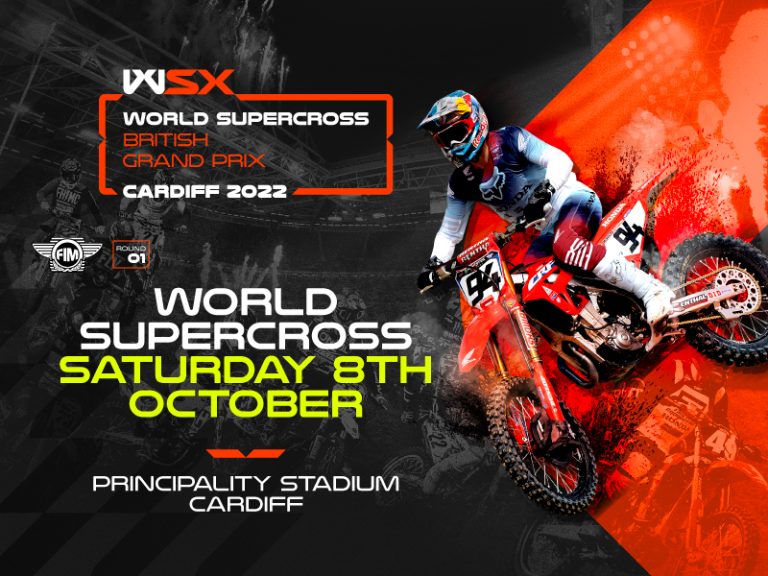 You know we’re all about adventure motorcycles here at ABR, but we do have a soft spot for trail bikes. For many of us, its where we started out on two wheels, tearing around trails on little 125s in our youth.

In fact, some of us are still at it. For example, ABR’s very own Julian Challis is tackling a section of the Trans Euro Trail on a GasGas right now.

That’s why we thought you guys would be interested to know that the World Supercross Championship is coming to the UK.

They may not be adventure bikes but, just as with Moto GP, there is something inspiring about seeing any motorcycle being pushed to the absolute limit by some of the world’s best riders.

On Saturday 8 October for the first time ever, the FIM World Supercross Championship will rev into action under the lights at Cardiff’s Principality Stadium for their British Grand Prix. More than 40 of the world’s best riders are heading to Wales battle it out on the dirt.

Just take a look at this video to see the kind of awe-inspiring stunts and breath-taking races you can expect to witness at the event. It’s a world away from our usual weekend bimbles down green lanes.

But how about a bit of history? We’ve heard plenty over the last few years about football coming home but did you know Britain also gave the world motocross?

Unlike football, motocross really took off Stateside and, predictably, they made it bigger: bigger jumps, bigger bikes, bigger budgets and they decided to hold events in sports stadiums, so crowds catch all the action. Thus, the sport of Supercross was born.

It also developed a following Down Under, and it is Australian company WSX that is bringing the show to Wales. That’s why they are transforming the home of Welsh Rugby into the ultimate dirt bike track, to bring Supercross back to its ancestral home.

Superstar Ken Roczen and 2020 Champion Eli Tomac will be among the riders battling it out for the international title. There will also be live music and pyrotechnics, which all for as little as £35 a ticket is a bargain for a great night out.

The competition will follow the well-established two-class format, with each independently owned team fielding four riders, two in the WSX (450cc) class, and two in the SX2 (250cc) class with a prize purse of up to £200,000 at each event.

A total of 10 teams are expected to be in the competition including MotoConcetps Honda, Bud Racing Kawasaki, GSM Yamaha, Rick Ware Racing, and Craig Dack Racing.

So why not take your family down for a healthy dose of adrenaline and a great two-wheel themed night out?

Tickets are available now from Livenation and you can visit the WSX website to find out more about the event.