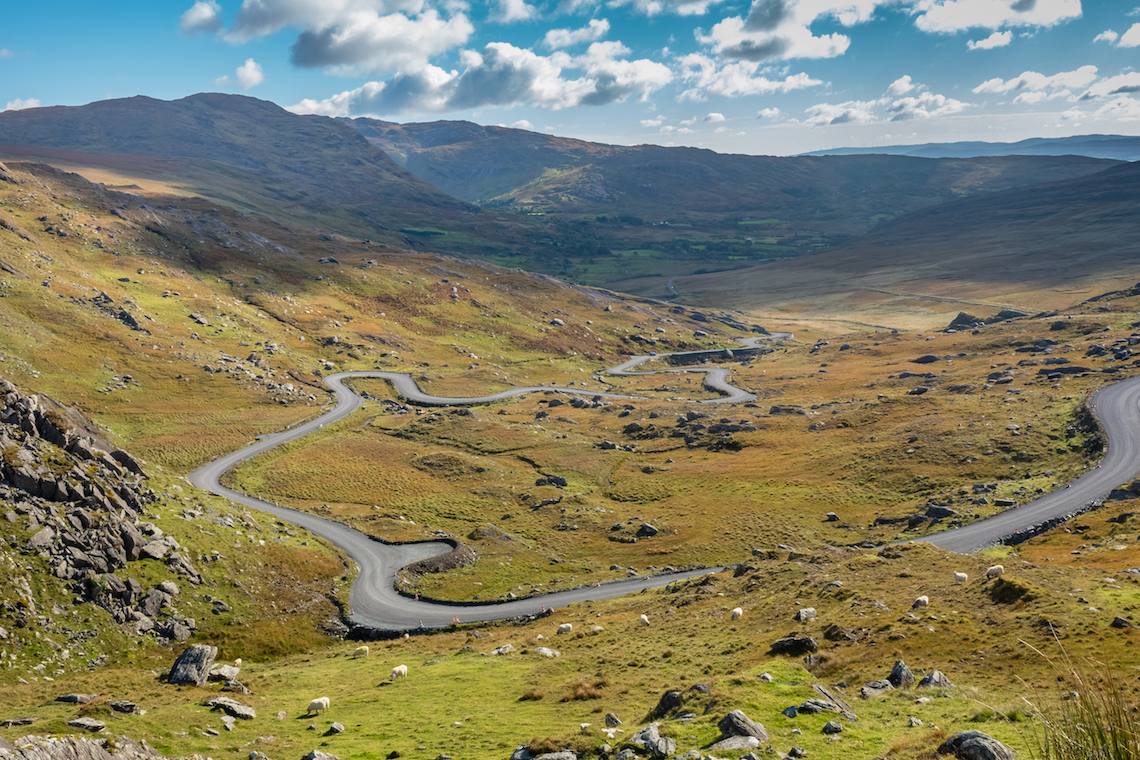 There’s something almost mythical about the lure of Ireland. Some are attracted by magnificent scenery, others enjoy the warmth of the locals and the craic in the evening, and for a few, including myself, a look into their family tree will show a genetic attachment to the land.

It’s a country that pulls at my heartstrings more than any other and one of the most alluring destinations for riders looking for adventure on the British Isles. This route showcases the very best of the south west of Ireland for those looking to explore the mythical Emerald Isle for themselves. 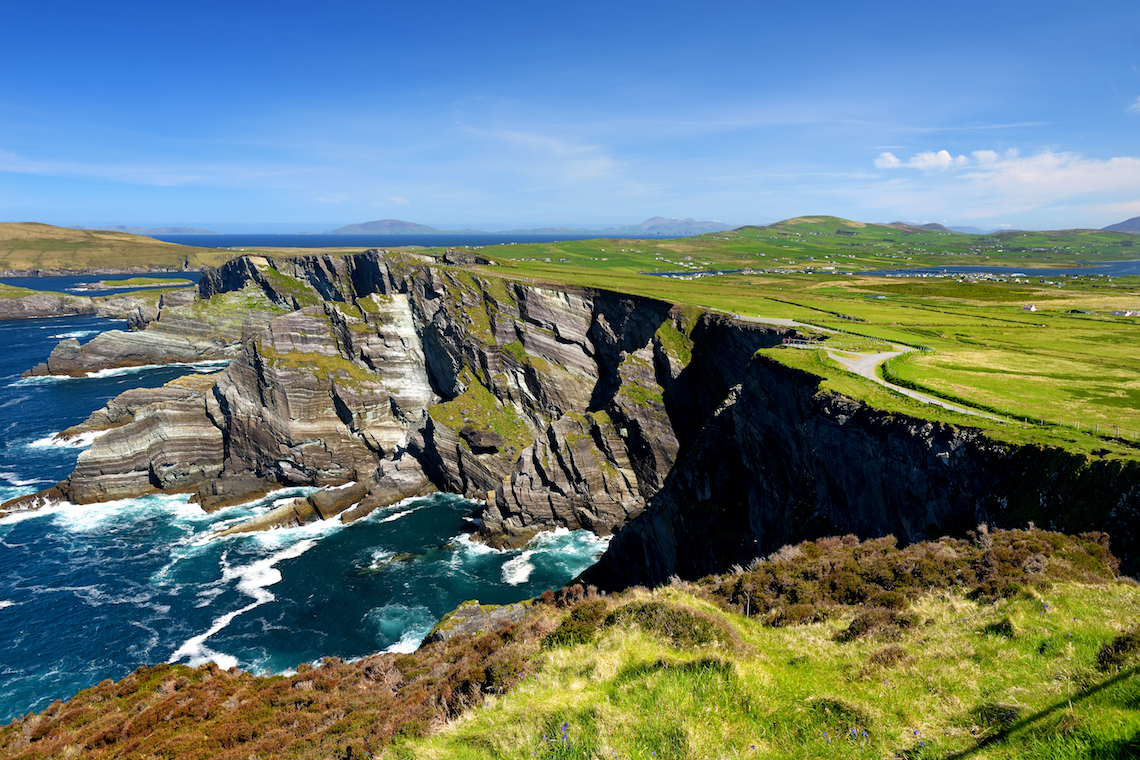 I’ve designed the route to be ridden across two days, leaving plenty of time to explore the sights along the way. However, there is a one-day option which skips the stunning Ring of Kerry for those short on time or people who have already journeyed around this famous loop.

We start in Cobh, the final stop of the world’s most famous passenger ship, the Titanic, before her fateful maiden voyage, and then travel west through County Cork. The riding here is stunning, especially the coastal roads where you’ll find the rugged coastline on your left and rolling green hills to your right.

After travelling through Cork, we’ll cross into County Kerry, exploring the wild and remote peninsulas that jut out into the Atlantic Ocean like wandering tree roots.

Along the way, we’ll stop at a series of poignant, quirky, and awe-inspiring sights that display Ireland’s diverse and varied landscape and history. We’ll travel along the iconic Ring of Kerry, a must-do for anyone visiting the area for the first time, while also tackling the remote and achingly beautiful Healy Pass.

So, without further ado, let’s get started. 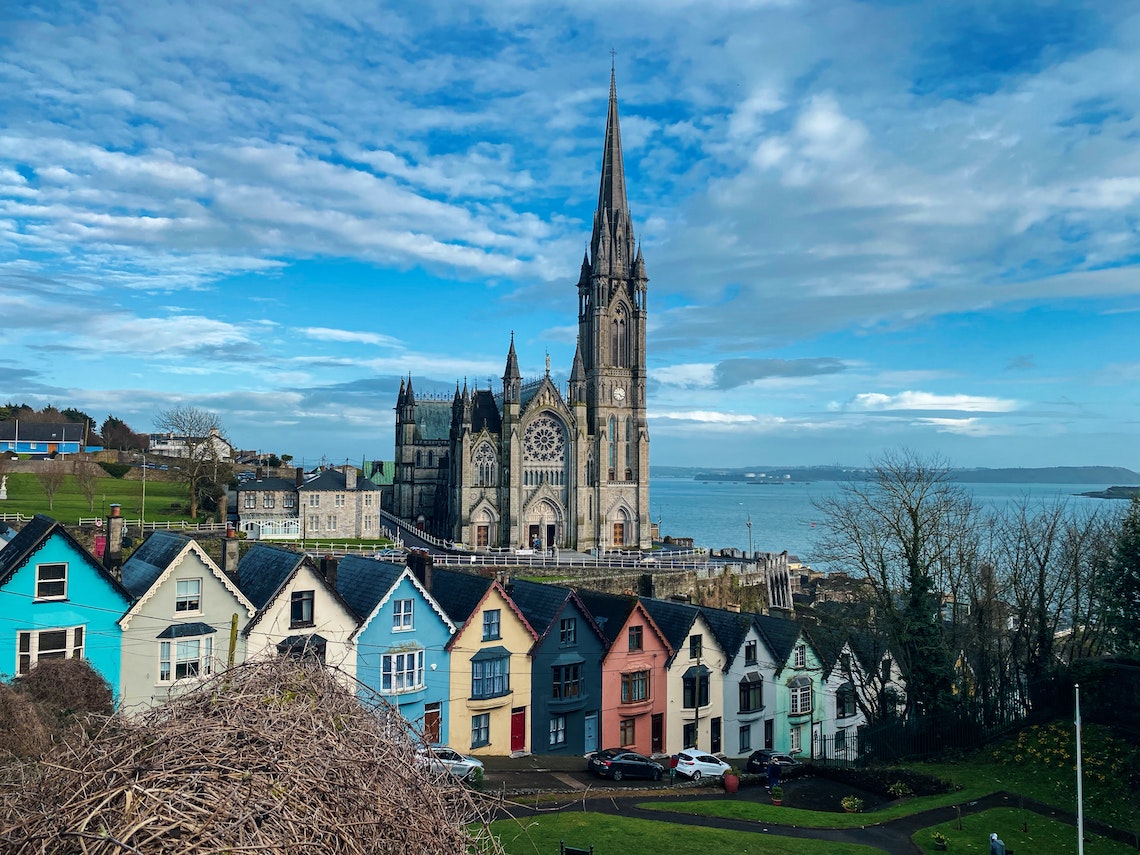 Our journey begins at Cobh, a quaint seaside town nestled outside the city of Cork. Located about a two-hour ride from Rosslare Harbour ferry port, it is  the perfect place to spend the night, especially for those travellers who have made the crossing of the Irish sea on the ferry from Fishguard in Wales to ride this Amazing Ireland route.

There’s more to Cobh than meets the eye though. As you sit by the harbour, enjoying the colourful collection of townhouses that line the streets, you’ll be looking out over the RMS Titanic’s final stop before her fateful voyage across the Atlantic in 1912. A memorial in the town honours the 79 passengers who didn’t survive the journey. 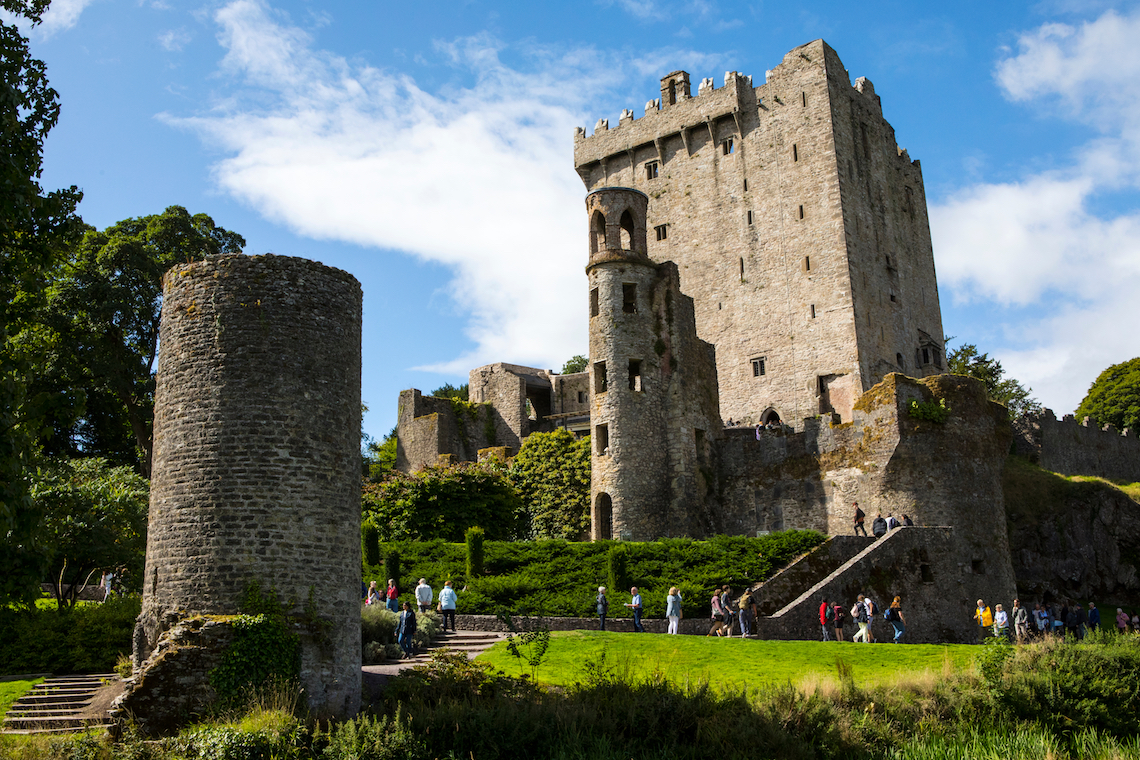 From Cobh, we skirt around Cork on a quick 40-minute ride to Blarney Castle. The castle is a medieval stronghold dating back to the 1400s, but we’re more interested with what is located within. After surveying the towering battlements, head inside and join the queue to kiss the Blarney Stone.

According to local legend, when the Lord of Blarney heard he was to be deprived of his traditional land rights, he set off to see Queen Elizabeth I. Worried that he wasn’t a good enough orator to change the Queen’s mind, an old woman told him to kiss a particular stone in Blarney Castle to receive the gift of the gab.

The Lord’s trip was successful, the Queen’s opinion was swayed, and it’s now said any visitor who lays their lips on this block of limestone will be similarly armed with great eloquence. 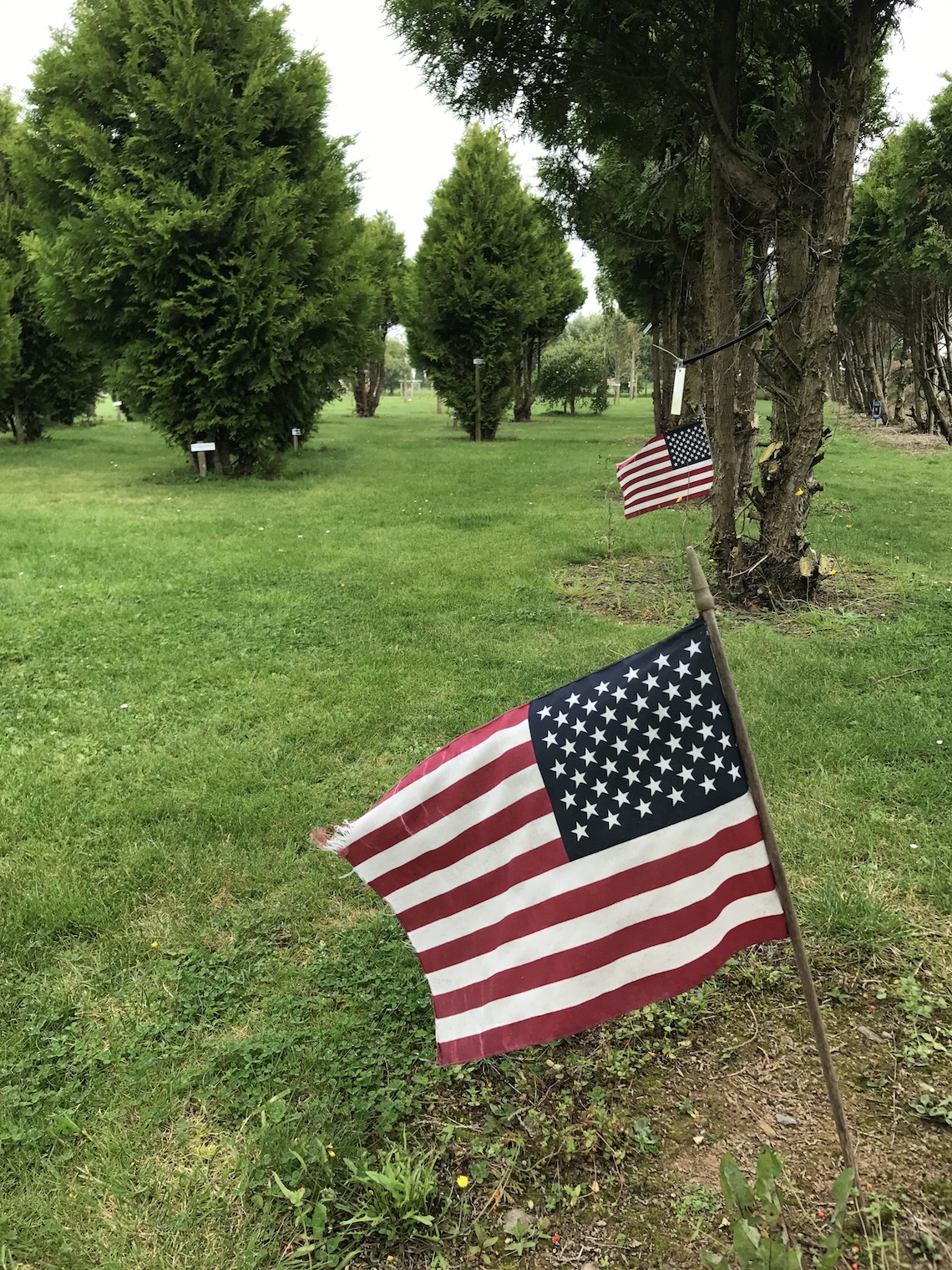 Leaving Blarney Castle behind, with eloquence guaranteed for life, we head back towards the coast and pass through typically picturesque Irish countryside. Shortly before our next stop, we pass through Kinsale, which is home to a number of cafés where you can grab a snack or your fix of caffeine.

Refuelled, we head across the River Bandon to the Ringfinnan Garden of Remembrance. The garden was created by Kathleen Murphy, a nurse in New York City who was born in the area, in tribute to the firefighters who lost their lives in the 9/11 attacks.

Isolated on top of a hill, it’s a moving place to visit. Lines of trees stand to attention, each one honouring the life of the 343 heroic firefighters who didn’t return from that fateful emergency call out. A small America flag flutters at the base of each tree. With your respects paid, it’s time to saddle up again and hit the road. 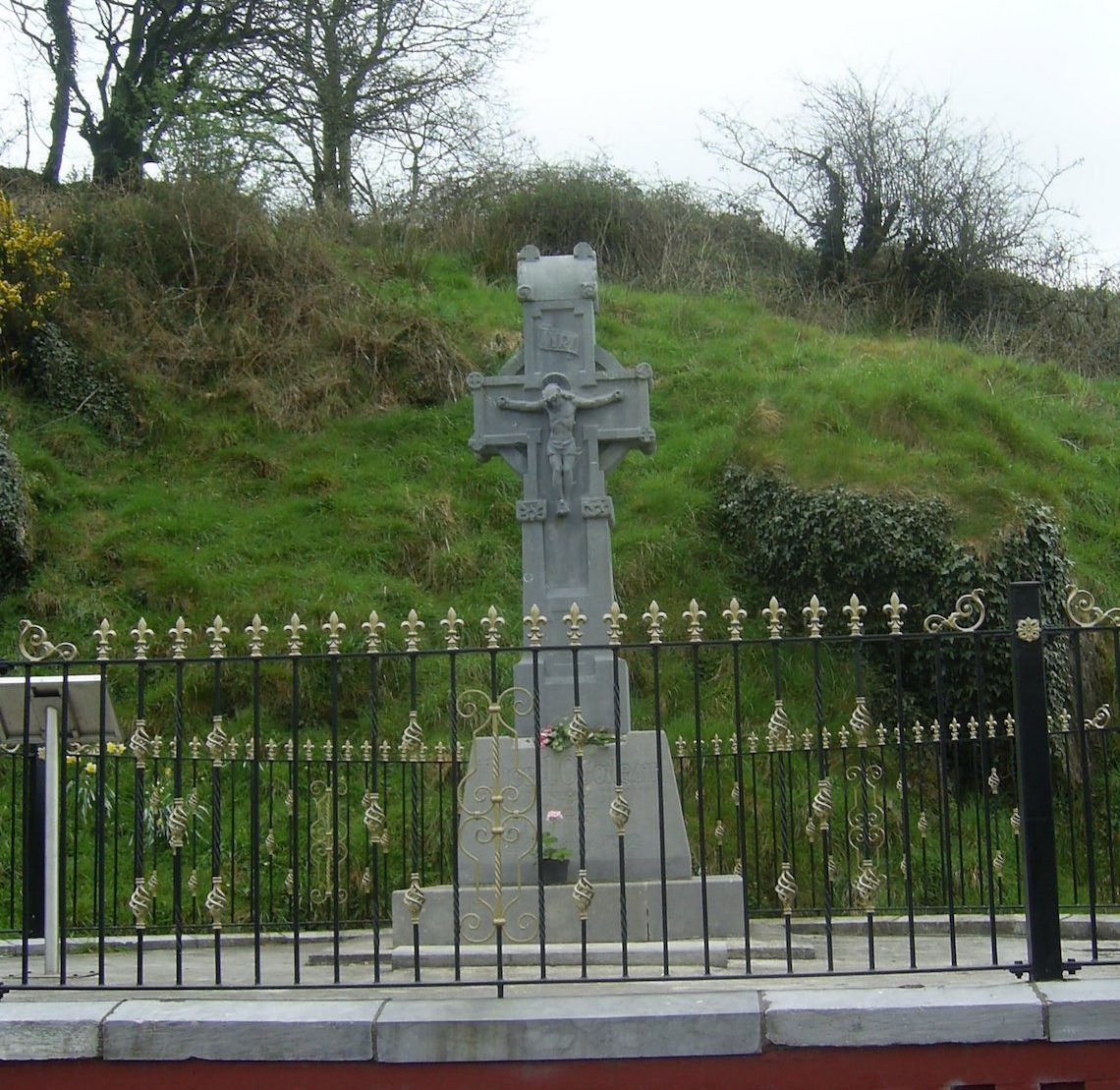 Heading back inland, we once again wind our way along country roads to the small village of Béal na Bláth. This stop gives us a small insight into a crucial moment in Ireland’s formative history.

It was just outside this village in 1922 that Michael Collins, leader of Ireland’s newly established Free State, was ambushed and killed by anti-treaty Irish Republican Army forces. In many ways his death typifies the events of the Irish Civil War, as Ireland’s forces became divided over what to do next following the signing of a peace treaty with Britain in 1921.

Collins was instrumental in the War of Independence and had been sent to London to negotiate the peace treaty with Prime Minister David Lloyd George. However, the Anglo-Irish Treaty was not supported by many Republicans back home and a splinter occurred that split friends, families and Irish society, ultimately leading to further conflict, and Collins’ early death in his home county of Cork. 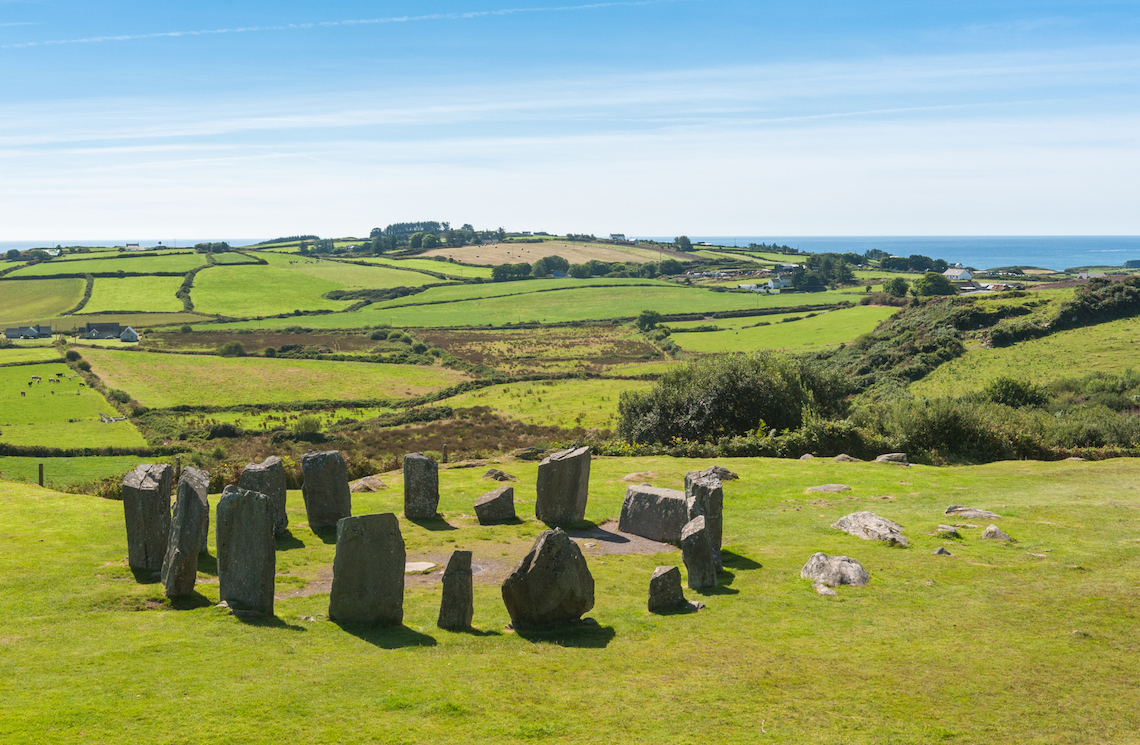 Moving on, we drop back onto some stunning coastal roads that meander along the coastline as we approach the Drombeg Stone Circle.

Also known as The Druid’s Altar, the collection of 17 tightly packed stones appears to have been a funeral pyre in the Bronze to early Iron ages after excavations found the cremated remains of an adolescent in a pot at the very centre of the circle.

After you’ve wondered at the skill of those early humans who managed to create such a monument, it’s time to re-join the road that will take us to our final stop for the evening. 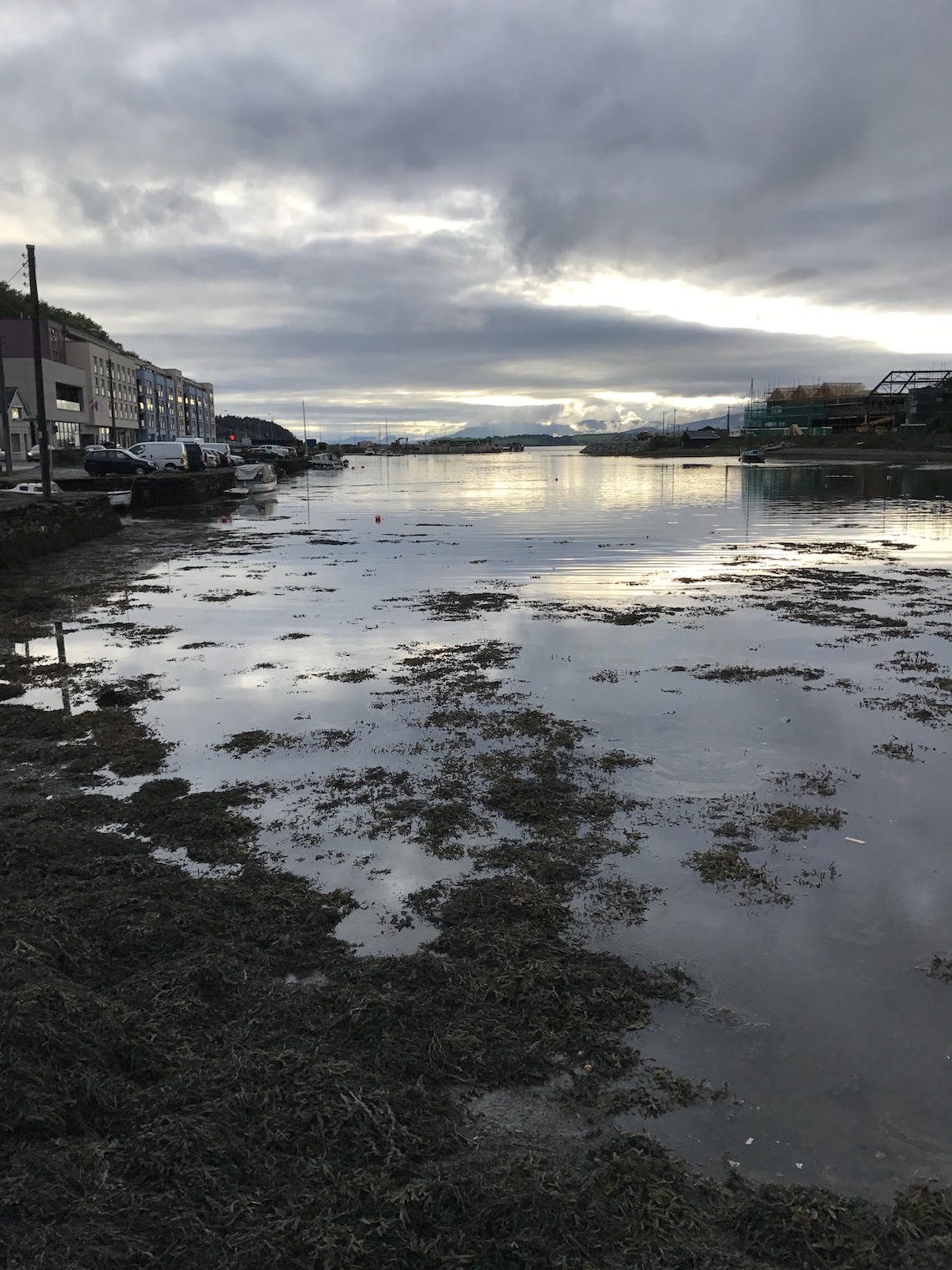 The road into Bantry is a cracking one to finish up an enjoyable day of riding, leaving us with plenty of time to relax in the town in the evening. Twisty and wide, it offers the perfect balance to the narrow countryside lanes we tackled earlier in the day, quickly bringing us in to the town of Bantry.

Made famous in song, Bantry is associated with the failed Irish Rebellion of 1798. Two years earlier, iconic Irish revolutionary Wolfe Tone had tried and failed to launch a rebellion with the help of 15,000 French troops. In the modern era the town is a fun stop for an evening, with plenty of typically Irish pubs hosting live music late into the night.

Get yourself into the swing of things with a pint of the local stout, a Murphy’s, and enjoy the craic. Sláinte! 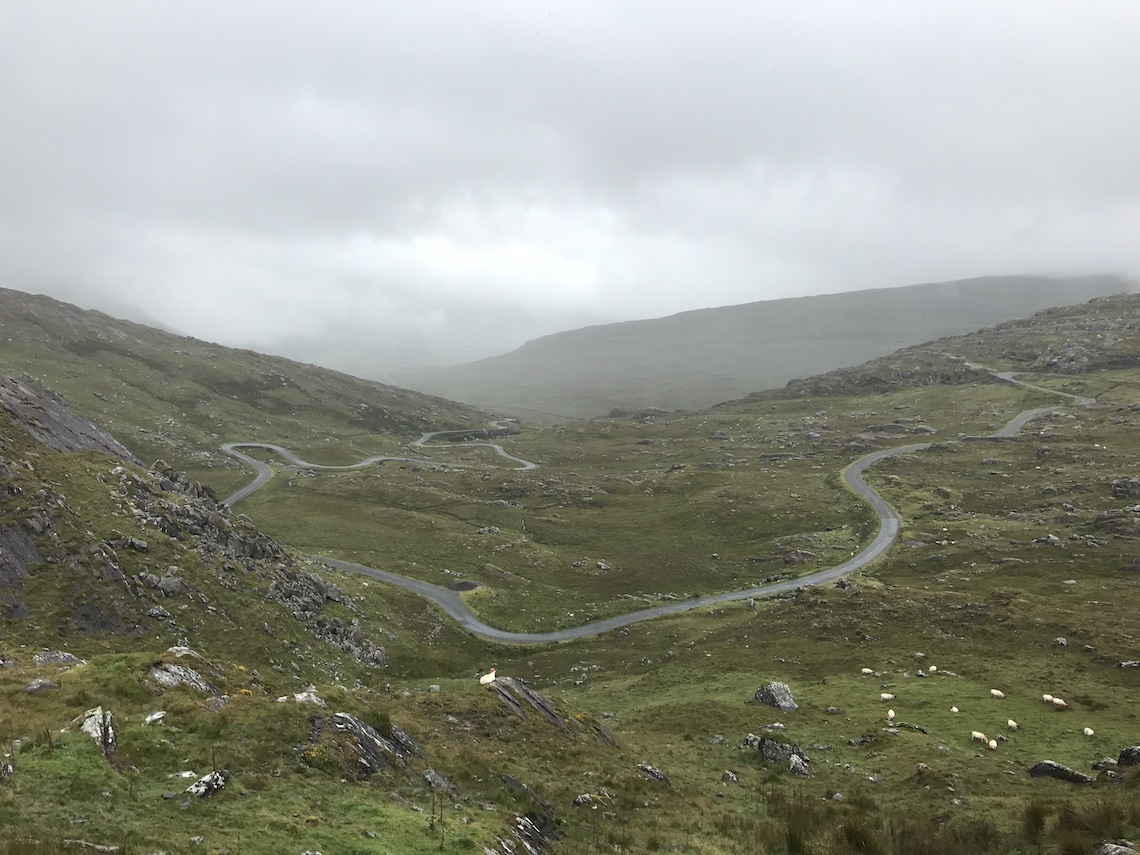 Any hangovers from the previous night will quickly be vanquished by some of the best riding the south west of Ireland has to offer. We start off with a quick ride across to the Beara Peninsula where we tackle the magnificent Healy Pass.

Created in 1847, the road has a dark history as one of Ireland’s many famine roads, where poor and hungry workers were forced to work to earn food. Following some modern improvements, it’s now a phenomenal ride although not one to take quickly. The narrow twists and turns take you up to an altitude of over 300m where you’ll be gifted with stunning views over the otherworldly landscape it cuts through.

It’s worth taking this one cautiously though, the majority of the road is too narrow for two cars to pass and sheep frequently drop their own slippery obstacles on the road. 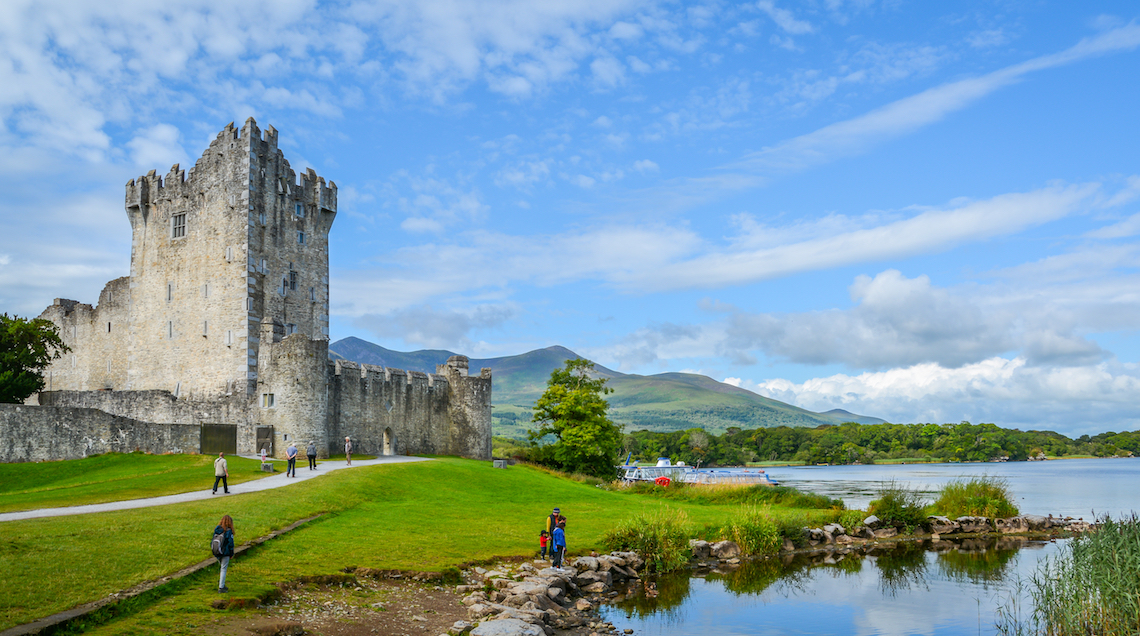 Moving on from Healy Pass we hug the coast while enjoying terrific views across Kenmare Bay, before riding onto the famous Ring of Kerry briefly on our way to our next stop. Ross Castle was the last stronghold to surrender to Oliver Cromwell’s Roundheads during the Irish Confederate Wars, but it’s also home to a local legend.

Word has it that O’Donoghue Mór, who built the castle, lives under the waters of the vast Lough Leane. Once every seven years, on the first morning of May, it’s said he rises on his white horse to circle the lake. Anyone fortunate enough to catch a glimpse of him is said to be guaranteed good luck for life. 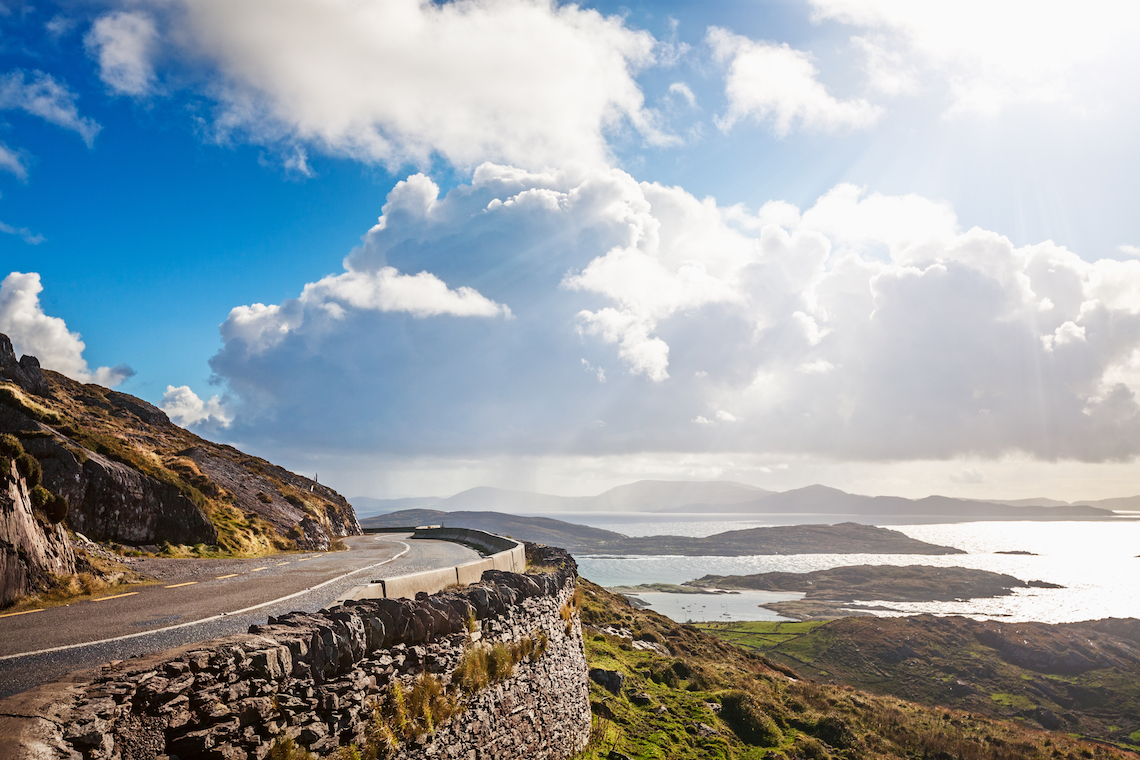 Next up we have the famous Ring of Kerry. While some may be dissuaded by the numerous campervans and tourist coaches that litter the road, there’s no doubt that it’s a road that needs to be ticked off at least once by any travelling motorcyclist in the area.

It’s a fantastic ride, offering plenty of twisty bends through narrow lanes that suddenly opens up with breathtaking views over the vast expanse of County Kerry. There are plenty of lanes to turn off as you reach the most westerly point, where you can catch your and breath dip your toes in the Atlantic Ocean.

If you’re feeling a bit peckish as you near the end of the loop, punch The Strawberry Field into your SatNav. It’s a small cottage café that serves up mouth-watering pancakes, while the lyrical Kerry accents of the staff will have you dreaming of a move to this delightful corner of the world. 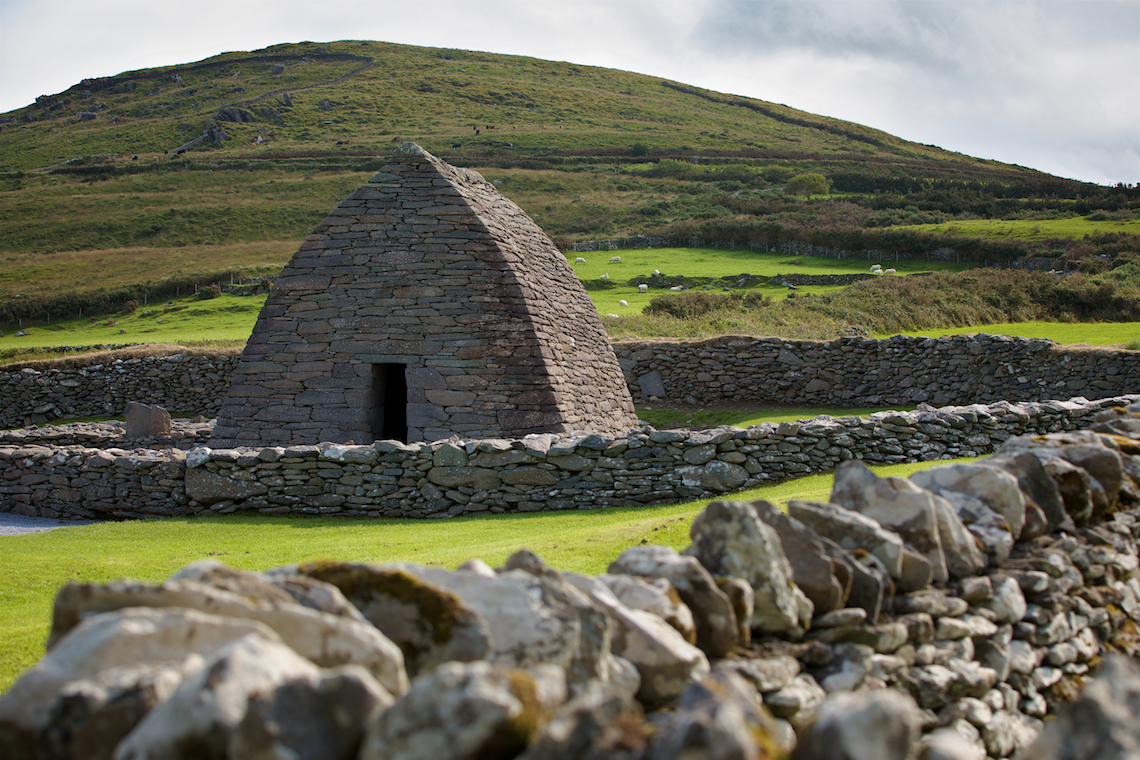 Tearing yourself away from those delicious pancakes, we cut across the Ring of Kerry, taking some of the lesser-used roads, before we join another coastal road on the Dingle Peninsula. The small fishing town of the same name will be our final stop for the day but we’ll take a quick detour to visit the Gallarus Oratory.

This chapel located at the very tip of the peninsula is estimated to have been built 1,000 years ago. Each stone has been cut perfectly to fit together, making the structure waterproof without any evidence of mortar being used to build it.

The interior is lit by a tiny window and legend says anyone who climbs through it is guaranteed access to Heaven. Attempting to do so is frowned upon, although they do say God loves a trier. 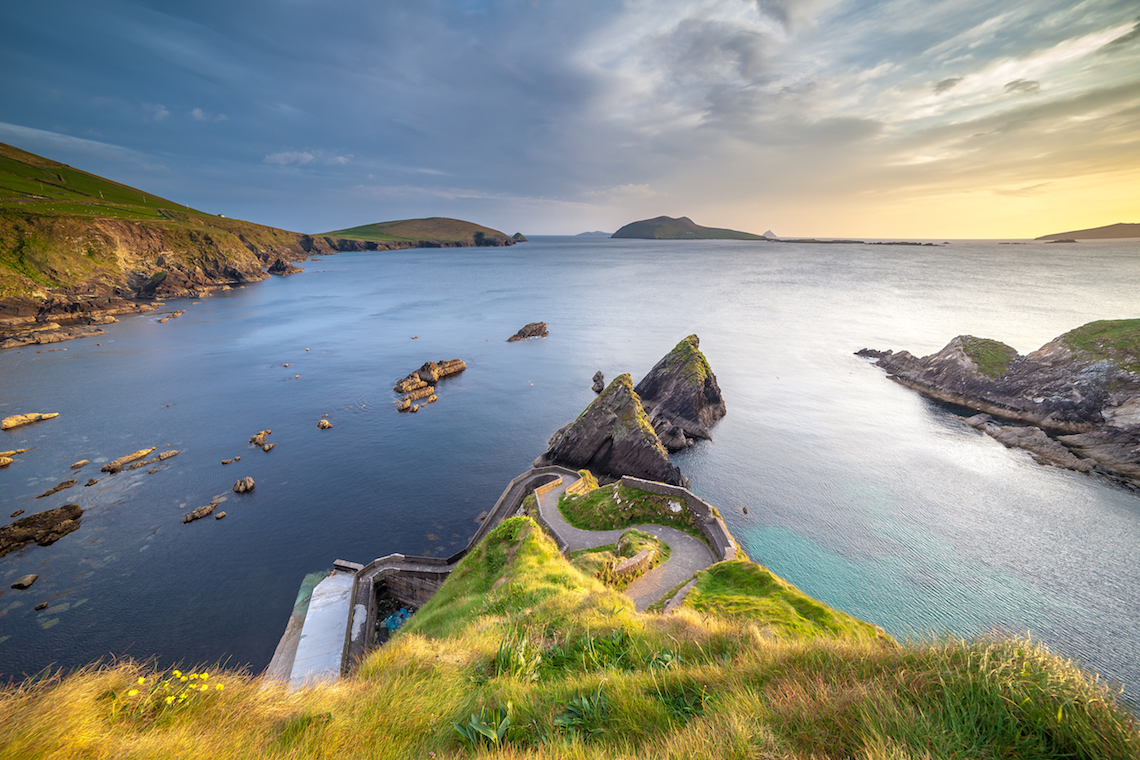 Finally, we loop around the end of the peninsula on our way to the small fishing town of Dingle, our final stop of the day and a beautiful place to spend an evening after a cracking day in the saddle.

Reward yourself with spectacular views, a well-earned pint and a trip to Murphy’s Ice Cream, home to some of the best ice cream I’ve ever tasted (mine’s a Honeycomb Caramel).

Here ends the Amazing Ireland Route, leaving you with the choice of a ride back to the ferry or continuing on northward to discover the Wild Atlantic Way.

Plug these waypoints into your SatNav to follow, as near as dammit, the ABR and TomTom Amazing Ireland route. It’s also available to download as a gpx. file so that you can stick it straight into your device without the hassle of thumbing in a new stop every so often.

Create your own Amazing Britain Route

As part of the TomTom Amazing Britain series, we’re asking ABR readers to create their own route and send it in to us. We’ll select the best submission, ride it, and then feature the route in the magazine.

As is the case with all the TomTom Amazing Britain routes, yours will need to be in the UK or Ireland, it will need to be rideable in a weekend, and should feature a series of places to stop at and explore along the way.

So, if you’ve got a favourite ride you think others will love, plot it on the TomTom Road Trips portal at www.tomtom.com/roadtrips, publish the route to the community, and send the link of your marvellous ride to james@adventurebikerider.com to enter the contest. We look forward to seeing it!