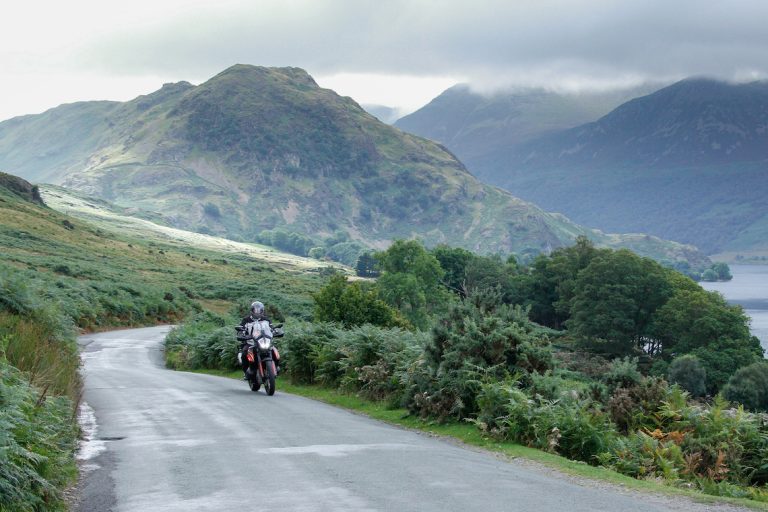 “Surely there cannot be a finer itinerary for a long-distance walk. The countryside traversed is beautiful almost everywhere, yet extremely varied in character, with mountains and hills, valleys and rivers, heather moors, and sea-cliffs combining in a pageant of colourful scenery.”

These descriptive words appear in writer Alfred Wainwright’s popular guidebook, A Coast to Coast Walk, which details a 190-mile path across the north of England, from St Bees in the west to Robin Hood’s Bay on the east coast.

Since it was published in ‘73, Wainwright’s coast to coast walk has become one of the best-loved walking routes in the UK, sparking the imaginations of thousands of hikers each year who gather at St Bees Head on the Irish Sea to embark on their own cross-country adventure.

But what, you may ask, has this all got to do with adventure biking? Well, Alfred Wainwright knew a thing or two about plotting stunning routes through dramatic landscapes, so much so that more than two million copies of his various walking guides have been sold.

So, when I realised his famous coast to coast route travels through three of the best riding locations in the UK, the Lake District, Yorkshire Dales, and the North York Moors national parks, I whipped out a map to devise a route for bikers.

The good news is Wainwright had already put in the hard yards by providing 11 overnight locations for walkers to stop on the route. Link these together and you’ve got the makings of a sensational day ride in Northern England from coast to coast.

So, armed with the Calimoto motorcycle navigation app on our phones, ABR Staff Writer Ollie and I set out to follow Wainwright’s coast to coast route as closely as possible, while seeking out the best motorcycle roads to ride along the way.

Beginning the day ride in Northern England at St Bees 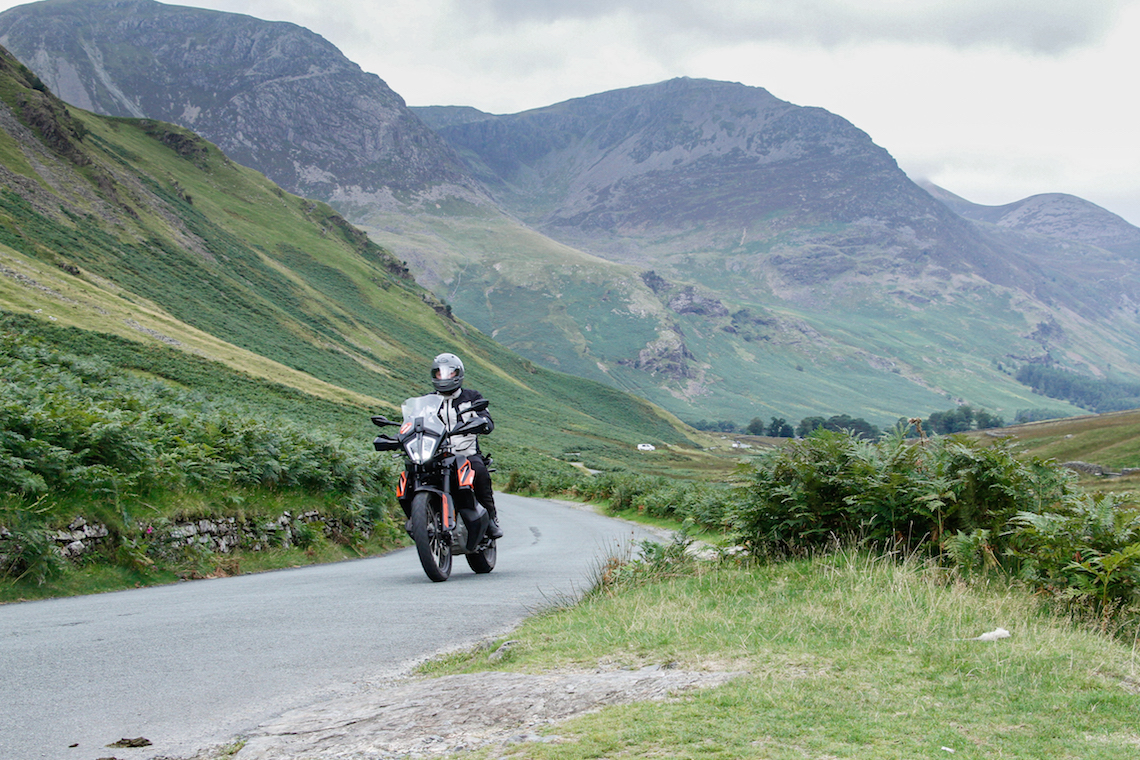 The sound of the Irish Sea lapping against the beach marks the beginning of our journey. To our right rises the cliffs of St Bees Head, the starting point proper of Wainwright’s coast to coast walk and the most westerly point in Cumbria.

However, the only access for motorists is along a private road, so instead, we begin the ride at sea level in the beach car park, where a sign has been erected marking the start the of the walk. There’s also a cafe next to the beach but I manage to resist the urge to wolf down a second breakfast.

With photos taken, we set off, Ollie on his Triumph Tiger 850 Sport and me on my KTM 890 Adventure, two mid-sized adventure bikes that are perfectly suited to the twisty roads and high passes that lay ahead.

After passing through a series of small towns and villages, we begin climbing into the Lake District National Park along narrow A and B-roads, quickly passing Ennerdale Bridge, the first overnight stop on Wainwright’s route, before meandering along the picturesque shores of Loweswater, Crummock Water, and Buttermere.

Above the village of Buttermere, we pass the Church of St James. Inside, is a memorial tablet to Wainwright set inside the sill of the south window facing his favourite place to walk, Haystacks.

With respects paid, we continue on to one of the most spectacular roads in Britain, the Honister Pass, which snakes its way along a valley floor before rising steeply to a height of 356m at its summit. Here we find a café where I fight the urge for a bacon roll and instead take a stroll to the lookout point across the road to soak up the grandeur of the landscape we’ve just ridden through.

After admiring the views, we saddle up and cruise down the western side of the Honister Pass before travelling through the idyllic Borrowdale Valley and the village of Rosthwaite, the second overnight stop on Wainwright’s walking route.

The sublime riding continues as we mirror the course of the River Derwent and then trace the edge of the three-mile long Derwent Water, its waters glistening in the summer sun to our left. 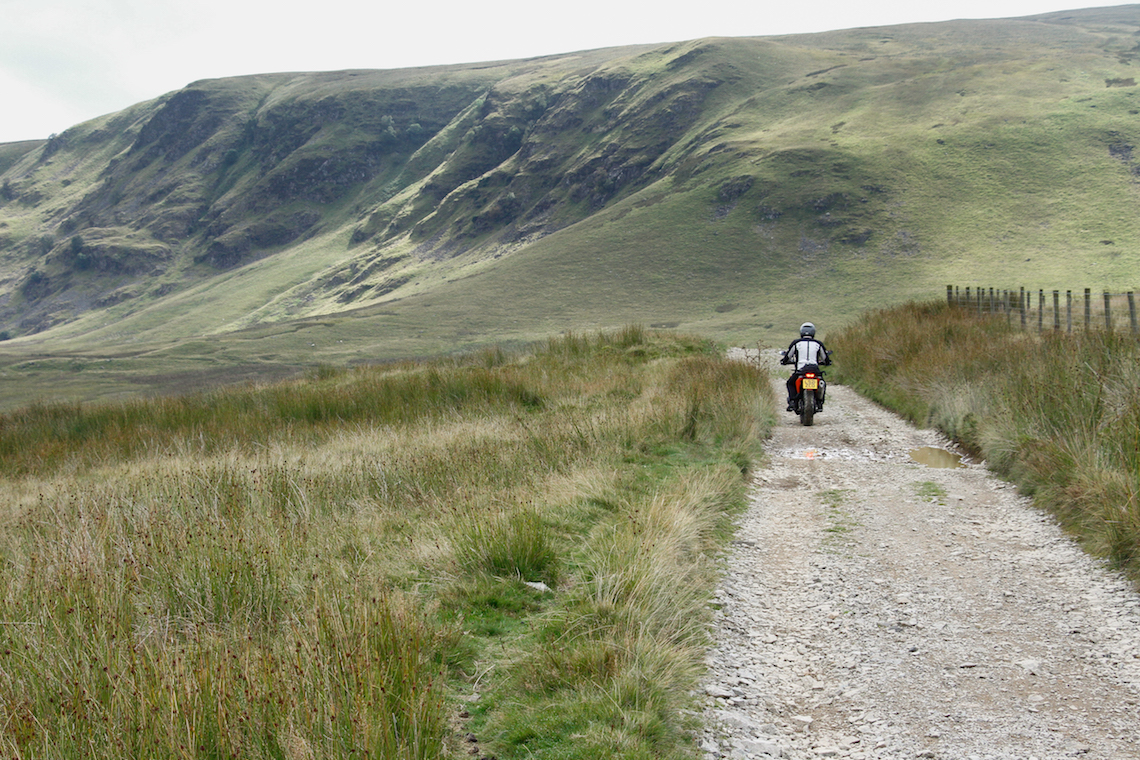 We pass through the market town of Keswick and ride south along the A591 towards Windemere, the largest natural lake in the Lake District. However, before we get there, we have a choice to make as we reach the hamlet of Thirlmere.

Turn right, and we’d continue south past the village of Grasmere, once home to poet William Wordsworth and the rather delicious Grasmere Gingerbread, before looping the back north over the Kirkstone Pass to the shores of Ullswater.

Alternatively, we can turn left and pick up the Old Coach Road, a green lane of just under five miles that takes you through a remote and spectacular Lake District landscape. I hadn’t planned to include any trails on this route, but as we sit faced with the chance to ride the Old Coach Road, we can’t resist getting some dirt on our tyres.

And so, we strike out across the landscape along the unclassified county road. The first half a mile or so provides the biggest challenge as we climb up the hillside, our wheels scrambling for grip on the unsealed surface made up of thousands of medium-sized rocks.

If you ride green lanes regularly, or you’re on a lightweight trail bike, this shouldn’t pose a problem, but if you are inexperienced and you’re riding a big adventure bike, it’s worth taking a stroll along the trail for a few hundred yards to make sure you feel confident in tackling it. Alternatively, skip the Old Coach road by following the road route south to Windermere.

Soon enough, the surface becomes more compacted and we both revel in standing on the pegs, letting our bikes feels their way along the trail, as we soak up vast views and watch the trail unfurl like a ribbon across the landscape in front of us. Life doesn’t get much better than this.

All too soon we reach the end of the lane near the tiny hamlet of Dockray and join the A592 that traces the edge of Ullswater (here we rejoin the route those of you will take if you don’t want to ride the Old Coach Road).

We take a relaxing ride around the lake before we leave the Lake District behind and jump on a fast section of A-road to the Yorkshire Dales.

Into the Yorkshire Dales 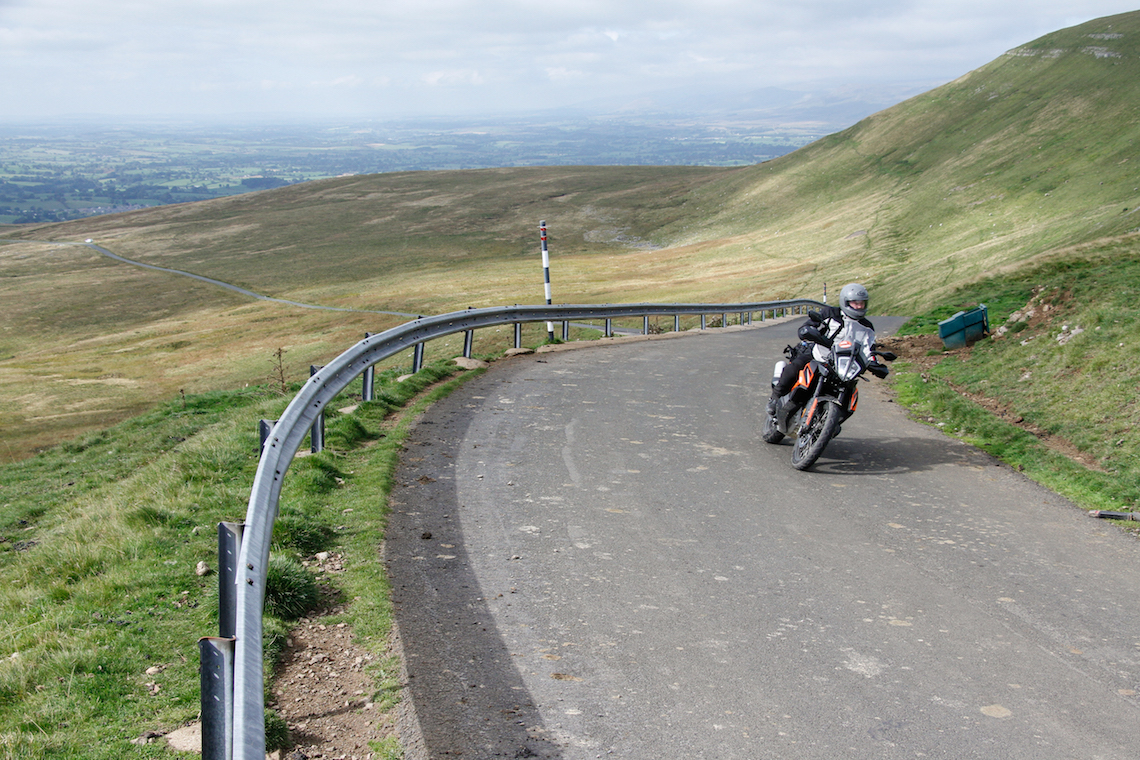 Our coast to coast ride travels across the north of the Yorkshire Dales National Park for around 45 miles, as we trace Wainwright’s route as close as we can through his recommended overnight stops in Keld, Reeth, and Richmond.

Initially, we get some fast miles under our tyres as we travel along the A685, before turning off just south of the market town of Kirkby Stephen, where we make a quick lunch stop for a sausage roll and a packet of Hula Hoops. Fine dining it isn’t, but as we stand next to our bikes in the sunshine, they taste pretty damn good to me.

Fuelled up, we head off down a snaking B-road that takes us up and over the moors, affording panoramic views to the horizon in every direction. It feels liberating to ride through such an open expanse of landscape, although the sight of snow poles marking the path of the road makes me glad we’re not riding here in winter when the snow can be deep enough to cover our bikes.

The Yorkshire Dales is a magnificent place to ride that deserves more time to be explored, but that will have to wait for another visit because we soon descend the moors before reaching the town of Richmond. From here, we follow Wainwright’s route east through the villages of Danby Wiske and Ingleby Cross, into the third national park of our ride, the North York Moors. 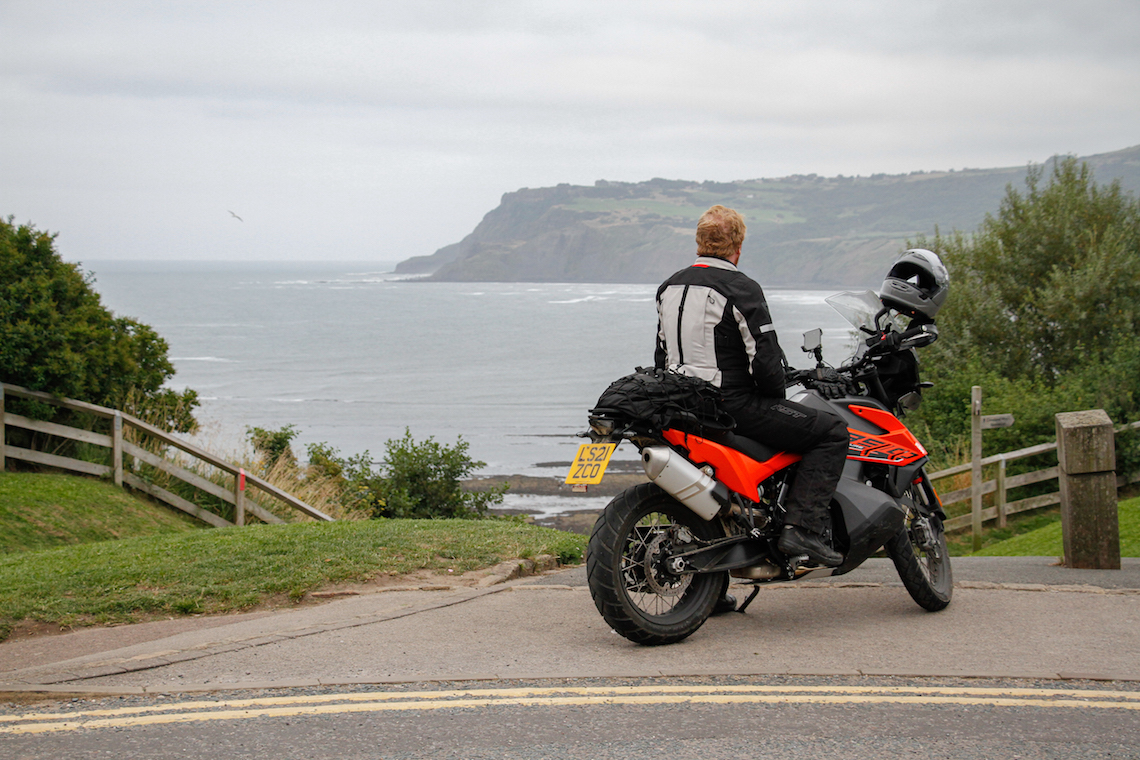 We follow the fast-flowing A172, skirting the village of Ingleby Cross, the ninth overnight stop on Wainwright’s route, before jumping on minor roads that twist and turn their way through rural scenery bordered by tress and high hedgerows.

It’s technical riding as we ride through hundreds of blind turns but it’s fun working the bike’s gears and brakes hard. I can’t think of a better motorcycle to be on than the KTM 890 Adventure as it darts into each new bend with a composed agility before eagerly accelerating out again.

We then climb up onto the moors and ride along narrow traffic-free roads which cut a path through huge expanses of moorland, affording glorious views in every direction. Striking out across an exposed landscape like this on two wheels is one of my favourite ways to ride, and even though the elevations aren’t huge, it feels like we’re on top of the world.

A little like the Yorkshire Dales, I wish we had more time to explore the North York Moors, In particular, I’d like to divert the 10 miles or so it would take to get to Goathland, which for years was used as the location of the fictional village of Aidensfield in the television show Heartbeat.

However, Wainwright has provided us with a sensational day ride in Northern England so far, so we press on along his route, descending the moors along quiet country roads until we reach the A171, which takes us past the popular seaside resort of Whitby.

We see Whitby Abbey in the distance, which is famous for its links to Bram Stoker’s gothic novel Dracula, but we don’t head into town. Instead, we ride the six miles to the finishing point of Wainwright’s coast to coast route, and our own journey, at Robin Hood’s Bay on the North Sea.

With its narrow, cobbled streets and quaint homes, the picturesque fishing village is the perfect place to sit down to a fish and chip supper and relax with a cold beer at the end of sensational ride from coast to coast across England. 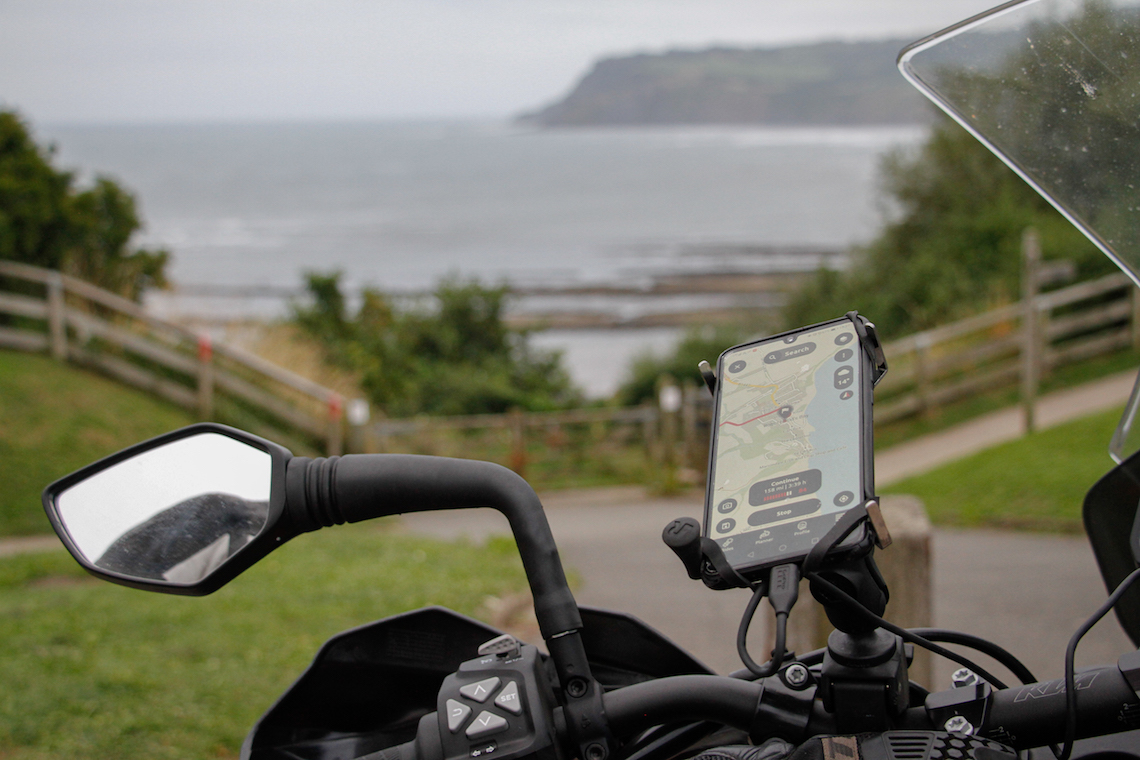 While we took inspiration from Alfred Wainwright’s coast to coast walk for this route, we actually found our way using the Calimoto app on our phones. It’s a dedicated motorcycle navigation app that’s ideal for a summer tour or a weekend ride.

Calimoto’s winding roads algorithm plans routes to include the curviest and most scenic roads in any area, or you can pick the fastest way to get to your destination. There’s also a logbook that collates your past rides, including statistics like speed and lean angle.

The app helped us plot a brilliant ride and you can give it a try on Calimoto’s website today.

Follow the day ride in Northern England for yourself

Plug these waypoints into your SatNav device to follow as near as dammit the day ride in Northern England. You can also find the route on the Calimoto app, where you can also download the route as a GPX file.

If you plan to ride the green lane section, make sure you refer to an OS map, as the waypoints and GPX file won’t take you on the trail. 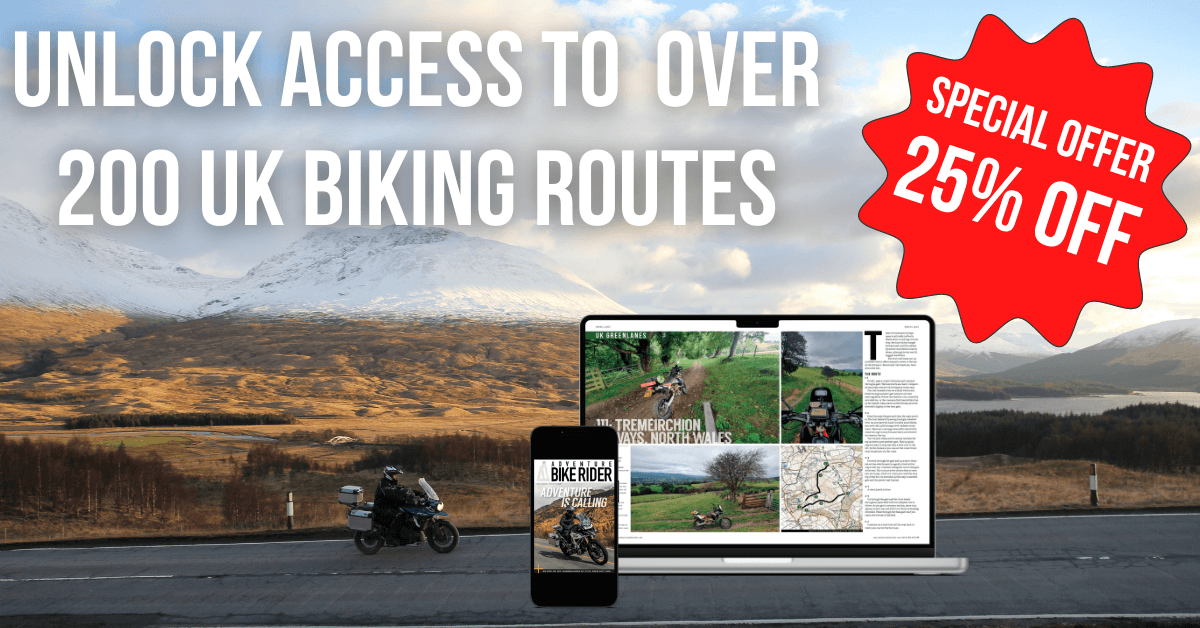