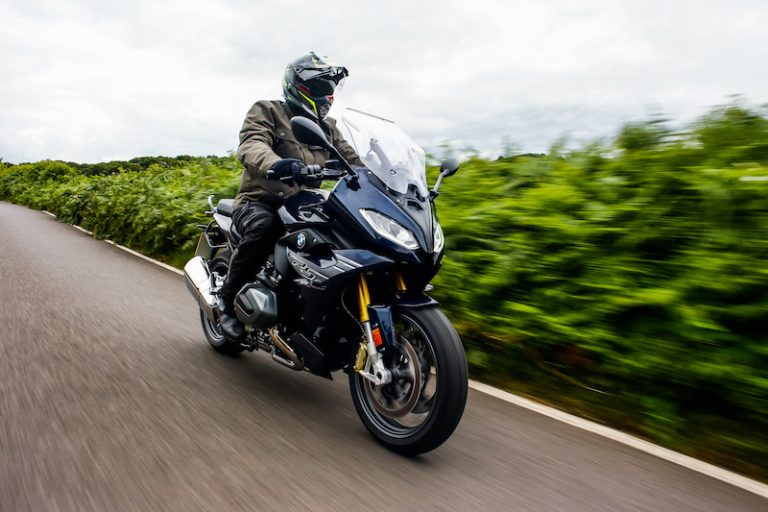 Julian Challis heads to the exotic motorcycle launch location of Dorking for the launch of the BMW R 1250 RS.

When you think of a BMW motorcycle, you think of a GS. The model range has been phenomenally successful for the German brand, continuously dominating the adventure bike market in every part of the world, and consistently runs in the top ten of all motorcycles sold in dealers from Sydney to San Diego.

The GS range clearly also dominates BMW’s production output, with the adventure bikes selling an incredible five times more than all their other models combined. And while the fantastic success is indeed enviable, it does leave BMW somewhat over invested in one particular market sector, and this is something that the company would like to change.

So, it’s against this backdrop that ABR was invited to test the latest of BMW’s range, the all-new R 1250 RS. Yet, even before we get to see the bike, the continued second division billing of the non-adventure machines is immediately evident. 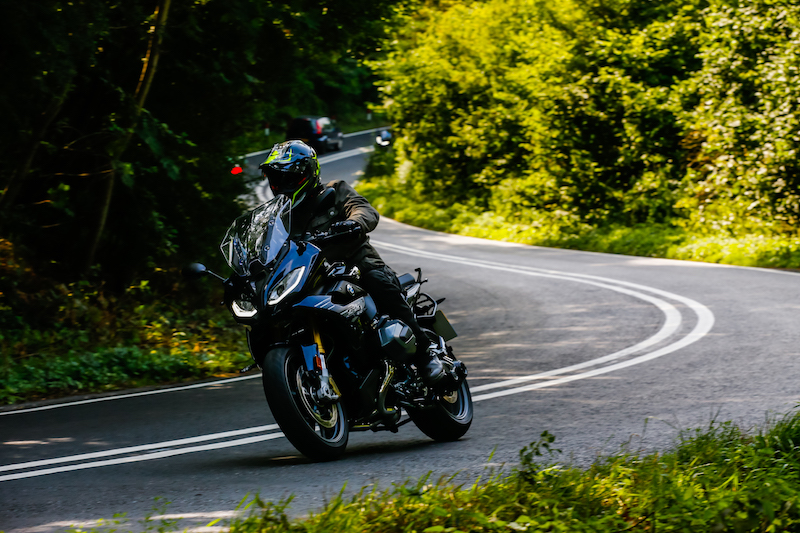 The European launch for the 2019 R 1250 GS was under the Mediterranean skies of Southern Portugal, with the reveal of the GSA a few months later in the sun-kissed landscape of Almeria. Our rendezvous point for the UK launch of the RS is the decidedly more prosaic location of Riyka’s Biker Café in Dorking…

But let’s forget the location for a moment and focus on the bike and immediately we’d have to say that the RS is a fantastic looking machine. Being a sport tourer, BMW has totally avoided any hint of off-road pretensions to produce a very focussed and competent road bike, even if it is so far under most buyer’s radars that it’s almost invisible! 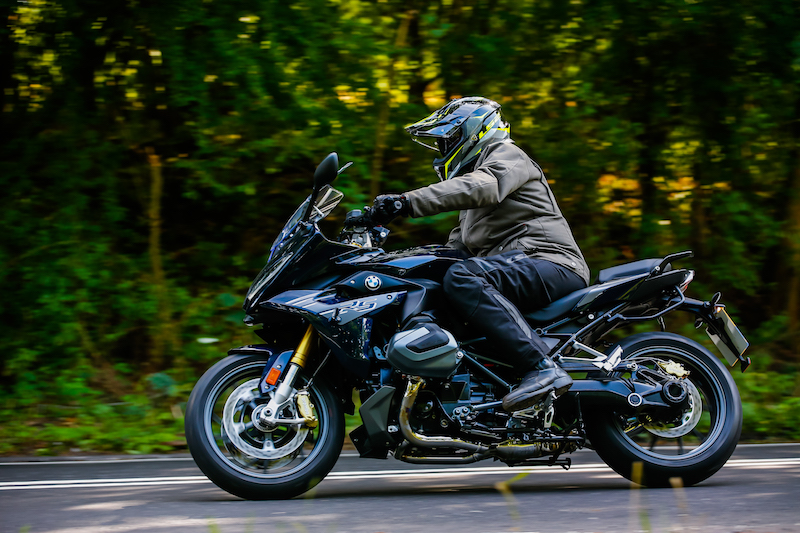 The best boxer engine ever made

But also like the other uprated models, this increase is all expertly managed by the Shift Cam system, delivering a seamless transition from a petrol-sipping, planet-friendly lower range to a Bahn-storming top end. If you’ve not ridden a bike with the new motor yet, then treat yourself to a test ride as soon as you can – this is the best boxer engine BMW has ever produced and you will love it.

But despite the bike having the same motor, the RS feels considerably different to ride on the road than the GS and GSA, and that’s down to the ratios in the shaft drive. While you might not have considered the possibilities, the ratios within the shaft drive have as much effect on the gearing as changing sprockets on a chain driven bike.

And for the RS, the gearing is far taller than the adventure bikes, meaning a far wider spread across the six gears and thus far less tapping up and down the gearbox. Not that gearchanges are a chore thanks to the quick-shifter that operates on both the up and down changes, but riding the RS certainly requires far less effort. If you have a GS and never go off road, then pricing up the sport tourer’s shaft drive might be an interesting exercise… 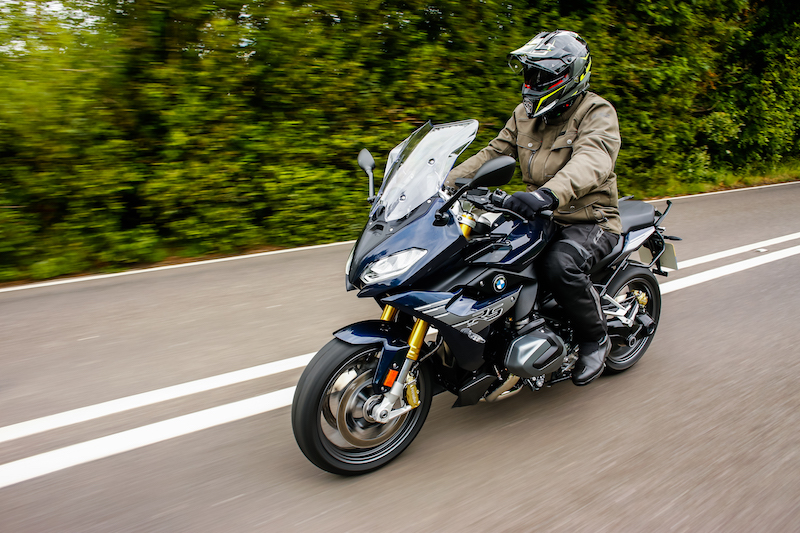 The RS also gets all the other upgrades from its rufty-tufty brothers. There’s LED headlights, the beautifully clear 6.5 inch TFT display and a host of electronic rider aids from ABS and cornering ABS, to traction control, electronic suspension adjustment, variable rider modes, dynamic braking, cruise control and hill start control depending on which model variant you chose from Standard to Exclusive or Sport. All modes and adjustments are easily selectable from the switchgear and the familiar thumbwheel.

The styling on the RS is definitely more Japanese than Teutonic and given that this bike might be the transition from those oriental brands to a rider’s first BMW, that is perhaps a sensible decision from the designers. The cockpit behind the top fairing is beautifully put together too, with well-positioned bars set at an easy reach from the riding position on the all-day comfortable seat. 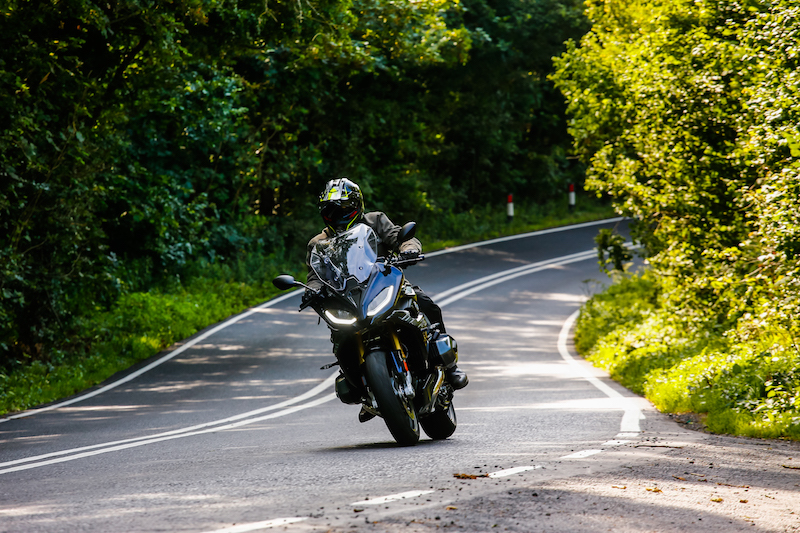 The screen has an upper and lower position that simply requires a pull to move from one to the other and deflects enough wind to make three figure speeds comfortable if not legal!

As a package the R 1250 RS is impossible to fault – it’s wonderfully responsive and stable to ride and will handle everything from weaving through commuter traffic to hooning around the bends on a summer’s afternoon and everything else in between.

\If you are after a bike that swaps from A road foolishness to tackling trans-continental trips without having to do any more than fit your luggage and book a ferry, then this could be the BMW you should buy. In fact, if you never intend to stray away from the tarmac, it may even be a better choice than yet another GS…