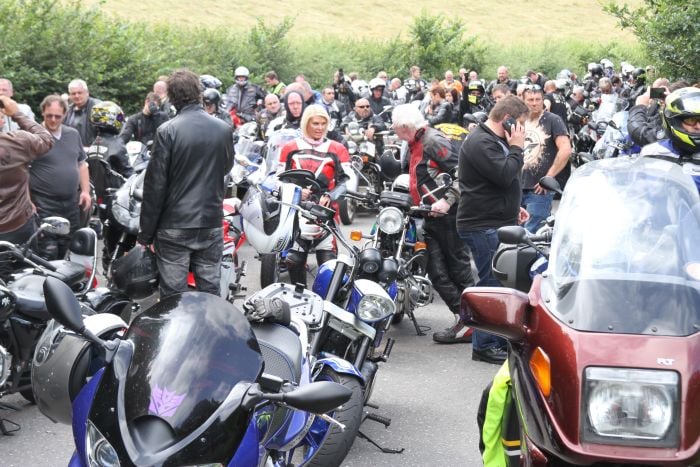 Talk about trauma, drama and facing your demons. Within the first hour of yesterday morning I’d been through the mill and this is why. The Sprint was in for an MOT, the Tiger got picked up for some major surgery down in South Wales and the Transalp was back with Honda. Holy mother of Mary, I was bikeless. Anyway, I managed to get over all that with a nice sit down, a cup of tea and a dunking biscuit, but the scars remain.

I picked up the Sprint with its new MOT just after 5pm and with the weather on side thought I’d have a blast down to Chipping Camden on the northern edge of the Cotswolds. And what a great decision that was, though I did notice the first spotters for this season’s battalions of insects were putting in an appearance on the visor.

Back at Stratford upon Avon I parked up on the new enlarged ‘pavement’ at the Bancroft Gardens directly in front of the Shakespeare Theatre. Over the past two years the gardens have been undergoing huge development under the PR inspired name of ‘World Class Stratford’. The fact that this £2 million re-jig has been the biggest act of vandalism in the history of the town (grand mature trees cut down and replaced by stone slabbing for example) seems to have passed right over the junk-filled craniums of the local councillors. Though not, I add, by the local residents (including me) who are funding this brutality via their local taxes. To date, I have yet to meet a local who thinks the change an improvement.

The Bancroft ‘pavement’, otherwise known as ‘Waterside’ has long been a popular bikers’ meet up place, in fact, I was told last night that it’s been a motorcycle park and meet spot for around 50 years. The council, bless them, have never been overjoyed by this fact and have constantly been a threat and pain in the neck. In contrast, both locals and visitors alike view the grand gathering of bikes as a great attraction, and a problem to no one.

This stand-off between bikers and the council is set to continue and the word is that it’s going to get ugly pretty soon with the tax funded brain dead Mafia getting serious with parking tickets and anything else they can think up under the sinister ‘World Class Stratford’ theme.

For their part, the local bikers are organising an unofficial rally in aid of the air ambulance service on Easter Sunday. The hope is for a big turn out, and if the weather’s fine that’s one thing we can be assured on any normal Sunday in Stratford. So, if you fancy a ride out on Easter Sunday get down to Stratford and give the council a finger or two.

Update: Nine years later and the motorcyclists have won a victory, of sorts. Every wednesday, hundreds of bikers meet up on Waterside in Stratford upon Avon for a good natter, and they all park on the pavement! Great result.