Battling nature on the road to Kathmandu

Swedish adventure rider Henrik Loman has been riding around the world and has so far made it from Ireland to Nepal. Upon reaching the Nepal-China border, Henrik was faced with a challenging prospect ‒ the Araniko Highway, an 89-mile long road that connects the border with Kathmandu. It is said to be one of the most dangerous roads in Nepal due to the extremely steep and exposed slopes on each side of the road. It is this road that Henrik tasked himself to take on. This is his story detailing his battles with monsoon rain, landslides and knee-deep mud on the Araniko Highway.

After many weeks of traveling through China, dealing with all the restrictions that are enforced in the country (you need a police permit to buy fuel for a start), it felt great to arrive at the Nepalese border. With the help of a ‘fixer’, a friend of our guide, we were able to pass through passport handling and the stamping of our Carnet de Passage fairly quickly.

Over the past couple of weeks I had had the pleasure of riding with two guys from the UK, David and Anthony, and we’d shared a Tibetan guide between us. By law you have to have a guide as you ride through China and so we’d spent that portion of our journey taking it in turns, giving the guide a lift on each bike. In a way it was nice and I enjoyed riding with a pillion for a change.

As we entered Nepal we had been receiving conflicting information about the state of the Araniko Highway, the road I was to be riding to Kathmandu. Two miles of the highway had been hit by a terrible landslide in August and some locals told us that it was possible to pass while others just shook their head saying, “impossible now”. The initial slide had been bad and, according to the same locals, it had killed over 200 people (official figures put the death toll at 156) when it crushed most of the houses in a village unfortunate enough to be in its path.

We arrived at the beginning of the section of affected road in the late afternoon and although it had started to rain slightly we decided to give it a go. We were met by a caravan of lorries, each one of them waiting to attempt to cross. Most of them had double parked so close to each other that our pannier laden bikes wouldn’t fit through. So we had to dismount the panniers, squeeze through and get to the front. We eventually passed the lorries and arrived at the beginning of a temporary road that had been constructed.

Just 200 metres into the road we approached the first lorry which had become stuck. Again we had to hop off our bikes and dismount our panniers in order to pass by on the outside. 150m later, another lorry was stuck next to a JCB. It looked tight but we decided we had to give it a go. I went first while David and Anthony waited and after I’d passed I went back to give them a push. Both of them managed to squeeze through but due to the deep mud and the sheer steepness of the mountain road, both of their clutches decided that they’d had enough. The two bikes came to a standstill in exactly the same spot. 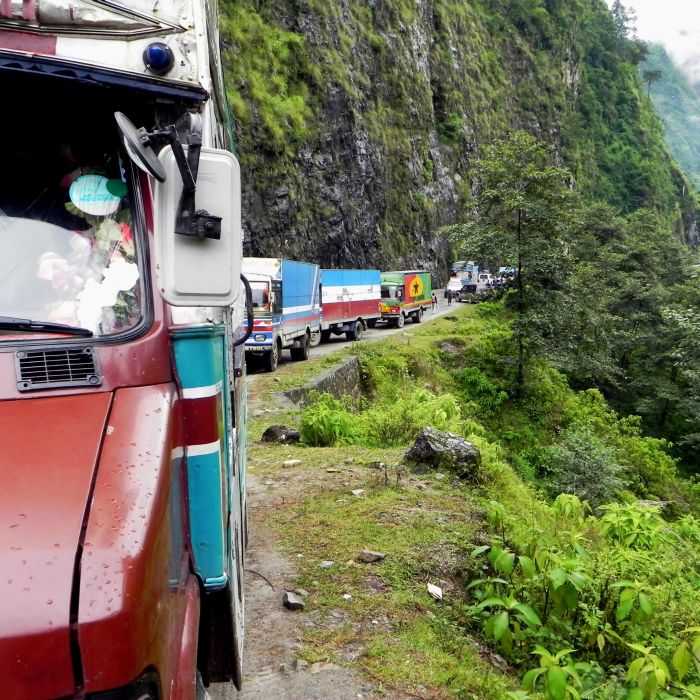 With this, the heavens opened with monsoon rain and the road began to take on the appearance of a river. Rocks and mud flowed down the mountainside and I had to make a decision. We agreed that there wasn’t much that we could do for their bikes and, as I had a strict schedule, we gave each other a hug and said our goodbyes.

I rode on through rivers and mud, leaving my British friends behind. I was certain that I’d end up with a broken leg as I kept getting it trapped between the ground and pannier every time I had to correct the bike, especially as I had to keep momentum up so that I wouldn’t get stuck. After just over a mile I was met by some Nepalese men frantically flagging me down shouting, “road is gone”. My reply, not wanting to believe what I was hearing, was “what do you mean road is gone?” They explained that the rain had triggered yet another slide and that there was no road around the bend and they were turning back.

I decided to take their word for it. I had no energy left to waste on even a short 10 metre ride to find out if it was passable, so I turned round. Trying to turn my big 300kg Africa Twin was a mission in itself, it was impossible to reverse the fully loaded bike in the mud by myself and as I saw locals disappearing panic began to set in. Not only was the rain coming down harder and harder but it was getting dark. Fortunately I managed to manoeuvre the bike around and I made my way back from where I’d come. 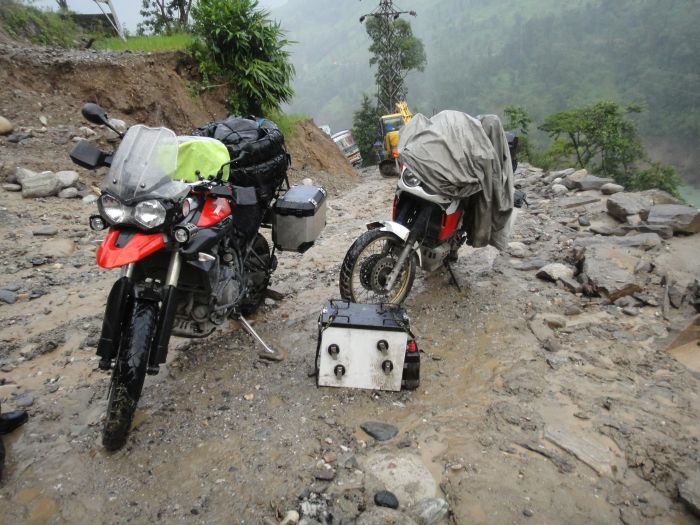 To my joy David and Anthony were still securing their bikes. At this point I was struggling with exhaustion, I could barely speak. I rode into Khasa, found a hostel and went back to pick them up one by one as they walked down the road. A bed to sleep in can perform miracles and the next day I woke up ready for a new attempt. I wanted to leave as early as possible as I didn’t want to risk riding in the rain. In an attempt to limit exhaustion to myself and overheating of my engine I decided to tackle the two-miles of road in four stages which turned out to be a good idea.

Twice during the hard slog through the mud and rocks I was stopped by police stationed in areas where football sized boulders were crashing down the mountainside and bouncing over the road. They observed the mountain before shouting to me, “go-go-go!”

Along the route I once again came across lorries that were stuck. Off with the panniers again with the only thing between my tire and the sheer drop off a cliff to my right being a few centimetres. Then back again through the mud to collect my panniers, mount them and carry on. 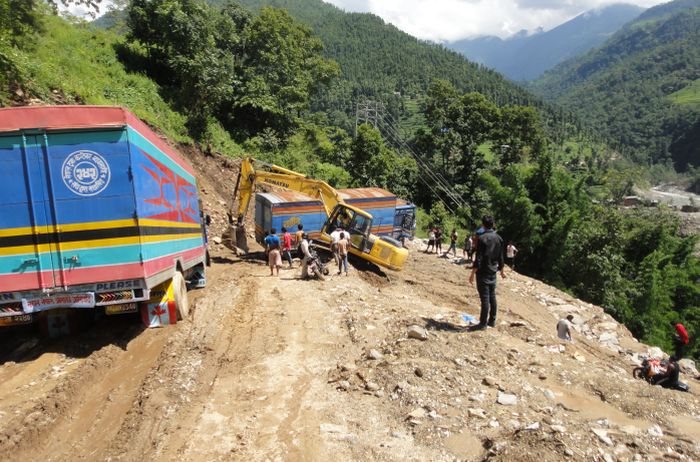 After an hour I started to see houses at the bottom of the mountainside. Sensing that I was close to the end I asked one of the passing lorry drivers if it was a long way to go, he pointed to the same houses with a smile and said, “That is the end”. I had made it past the landslide! I wrote this piece from the Kathmandu side of the landslide on the Araniko Highway, sat down in the shade next to a rock, splashing water on my face to cool down with a sense of relief. There’s only 80 kilometres left on the road to Kathmandu but from here on the quality of road gets better and the scenery is amazing.

At the time of writing this, the two other bikes are still stuck on the landslide road and David and Anthony have spent most of the last day sourcing parts (it’s not possible to buy parts for a Triumph 800XC in Kathmandu so they’ll have to be shipped from the UK). The plan is to stick the two bikes on a lorry when the road is better and get them to Kathmandu where they’ll hopefully be mended. Worst case scenario; David and Anthony will have to be airlifted by helicopter past the slide.

Henrik Loman is a 41 year-old Swedish man who has lived in the UK since 2001. He’s currently riding around the world on his Honda Africa Twin XRV750 RD04 with his fluffy companion, Cow-Man. He’s so far ridden from Ireland to Kathmandu and plans to trek to Everest Base Camp. 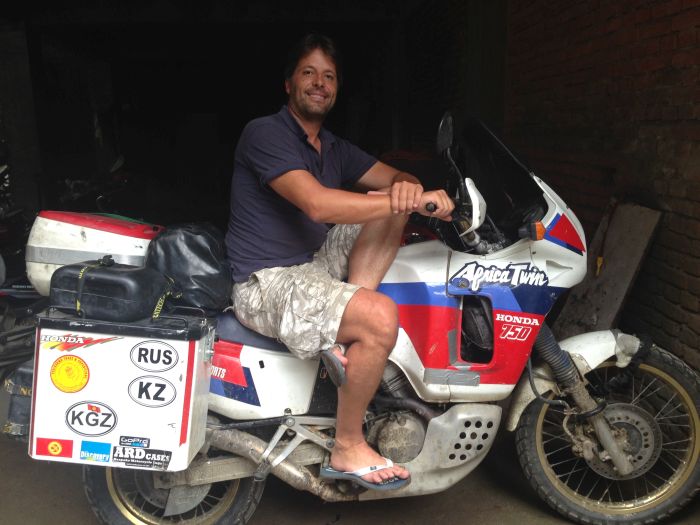 This article first appeared in ABR issue 25. Want to keep up to date with all the latest adventure bike features and reviews? Click here to find out how you can get your hands on all new issues and the complete back catalogue of Adventure Bike Rider magazine.