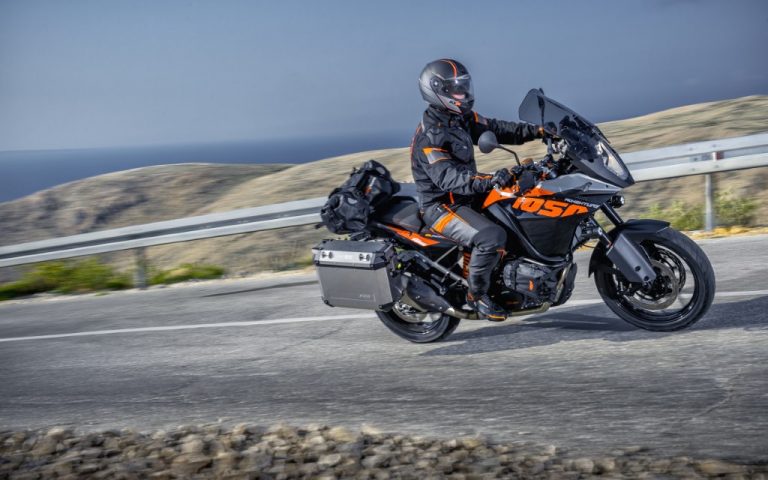 KTM has announced details of its latest adventure bike, we’ve got the scoop…

Exciting news from the Austrian motorcycle manufacturer. Following on from the recent announcement of a new 160hp KTM 1290 Super Adventure it’s been confirmed that the company are also launching a 1050 Adventure, with further details of the smaller capacity adventure bike being revealed at November’s Eicma show in Milan. The 1050 fills a gap left by the discontinued 990 Adventure, however with the company already offering a 1190 model, it’s more of a slither than a gaping hole.

At Eicma it was revealed that the 1050 will be powered by an LC8 V-twin Keihin engine putting out 96hp at 6,200rpm, a huge decrease from the 148hp on offer from the 1190. The bike is built around a strong chrome-molybdenum steel frame and comes with a 23-litre fuel tank. The standard 1050 will have multi-mode combined ABS, multi-ride mode technology (three on-road modes plus an optional off-road) and multi-mode traction control.

The traction control, which can be disengaged, will allow for more or less play at the rear wheel depending on the riding mode chosen and the ABS system lets the rider lock the rear wheel in ‘off-road’ mode.

In terms of looks, barring a few minor tweaks the 1050 Adventure is very much a shrunk down replica of the 1190 Adventure, but with that bike receiving such positive feedback from the fashionistas of the bike world the old saying ‘if it ain’t broke, don’t fix it’ comes to mind.

At 212kg the 1050 is the same weight as the 1190 but it’ll likely appeal to riders wanting that ‘big bike feel’ with a little less intimidating power than the 1190 and 1290 Adventures. While KTM has yet to announce a price for the new adventure bike, they’ll be doing so at Motorcycle Live in November.