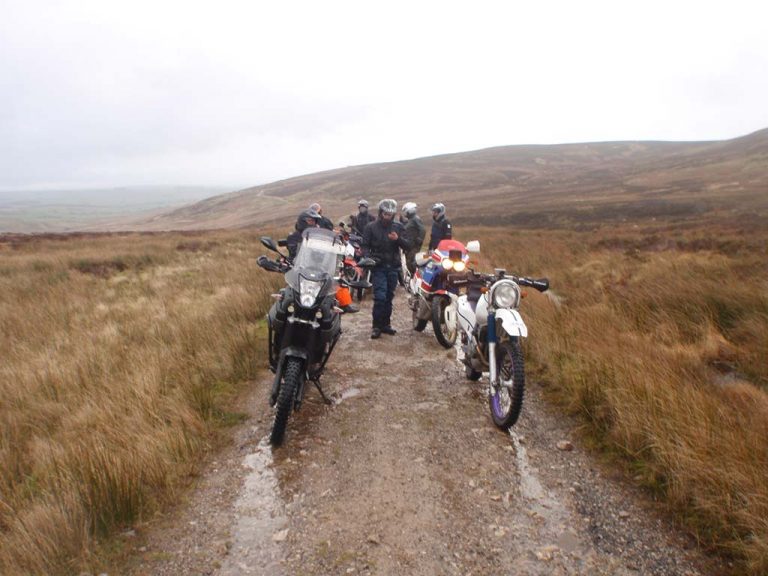 In the second of his series on UK green lanes, Mike Beddows checks out routes in Lancashire and North Wales 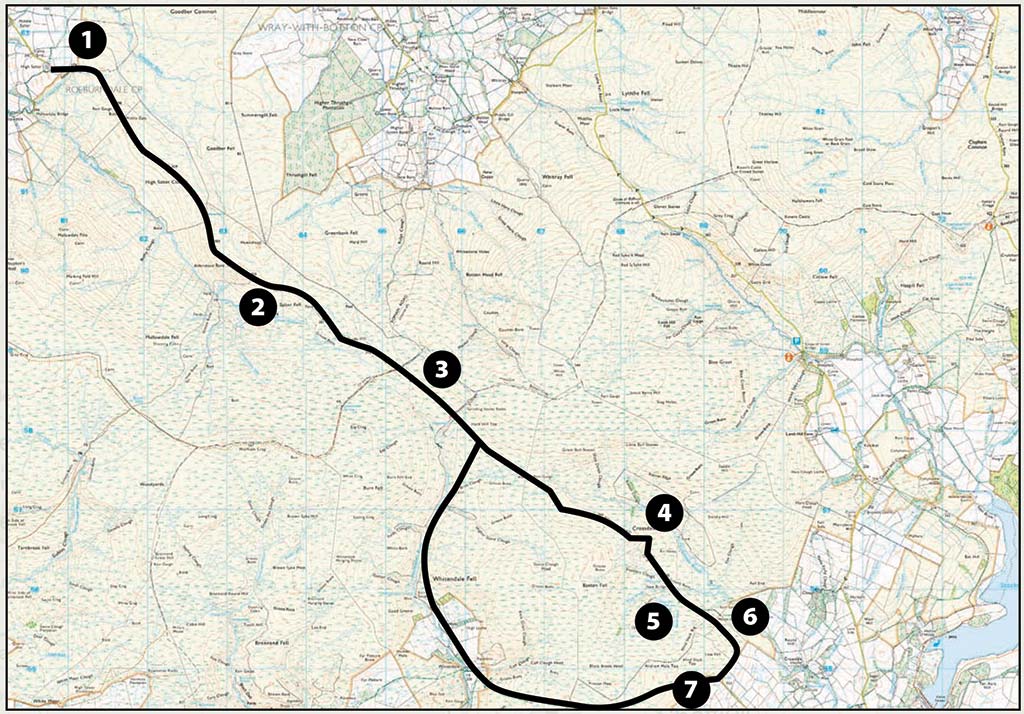 The Salter Fell is a long easysih trail that crosses the high moors of Bowland from High Salter and Wray in the Lune Valley to Croasdale above Slaidburn. The trail stretches for approximately 8 miles and follows a moorland track.

The route is relatively easy and will be achievable for most novices, apart from a short 150-metre section of rough terrain. This technically tricky section contains fist-sized rocks with a sandy base and should really have a difficulty rating of 3, but I’ve rated this lane as a 2 because the rocky section is so short. Following the route as shown on the map overleaf it’s a downhill slope. I’ve seen a BMW R 1200 GSA with a burnt-out clutch being walked down this part of the trail. It’s very possible to get down safely if you’re cautious.

The trail has a TRO (traffic regulation order) for cars but solo motorcycles are allowed. The trail is extremely remote and can be very exposed if the weather takes a turn for the worse. 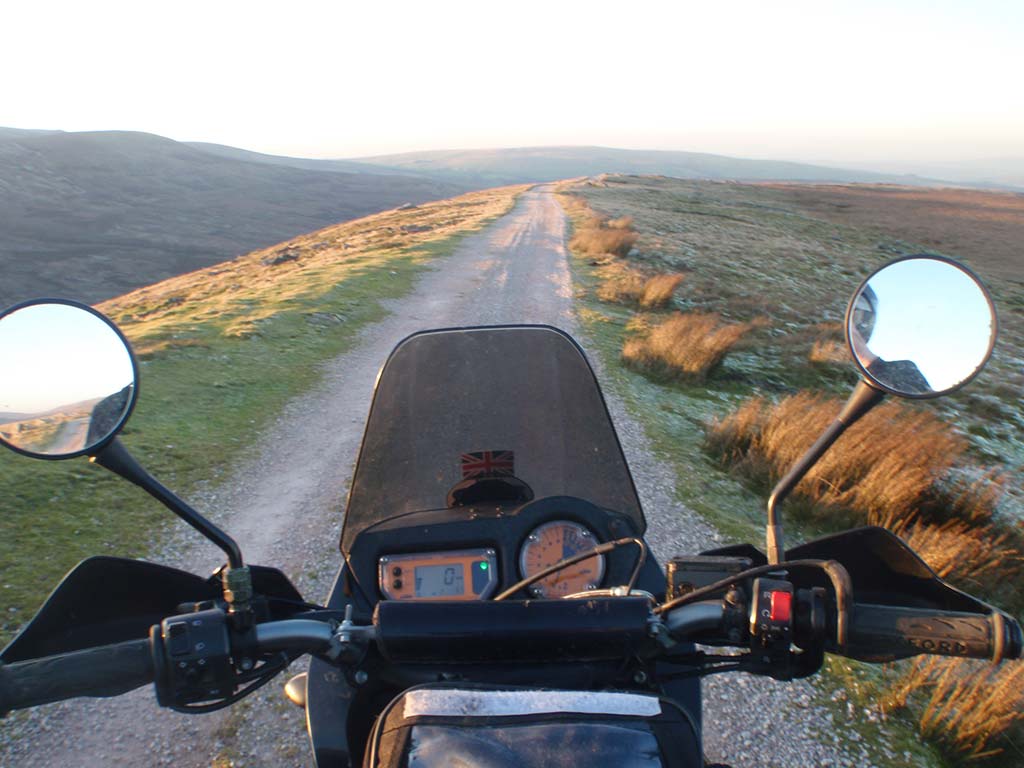 Distance: 8 miles
Nearest town: Clithero to the south; Lancaster to the east
Maps: OL Explorer Map 41 1:25,000 Forest of Bowland
Start/end grid reference: SD608626 / SD692548
Difficulty rating (out of 5): 2
Wow factor (out of 5): 4
Other trails: There are other trails in the area, and more in the nearby Yorkshire Dales. There’s roadwork to be done between trails and for this reason it’s best to obtain a guide or ride leader. (Keep an eye on www.adventurebikerider.com for member-organised ride-outs) 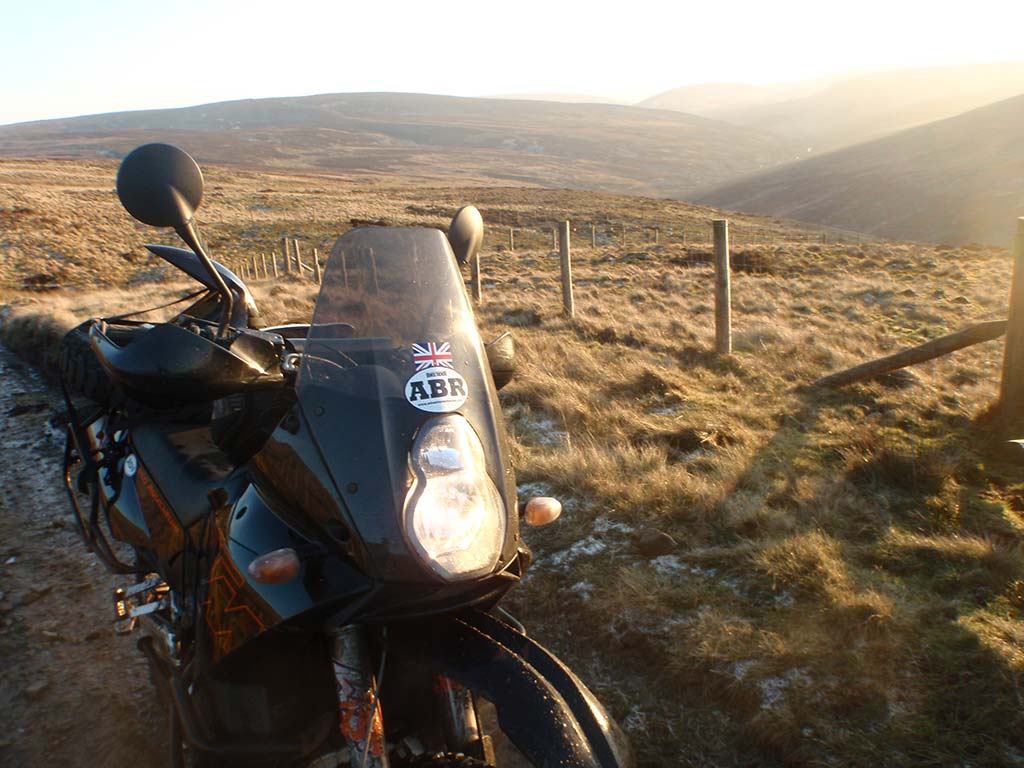 The first 2.5-mile section of this trail has been graded and consists of very small stones compacted down. The views are fantastic, and the going is extremely easy for any bike with any tyres. Still, be warned that there are a few bumps which go over drainage pipes. For the more adventurous these bumps can be used to get some air between the ground and your tyres.

The high grade gives way to a larger grade of rock. The going becomes a bit more di. cult on the marble-sized stones but shouldn’t trouble any rider if ridden at a sensible pace.

At the end of the graded section the trail crosses open moorland and the views are fantastic. The going gets a bit harder now as the graded section ends, becoming muddy and rocky, but the base is solid and for the most part it’s pretty straightforward and won’t trouble the majority of riders. 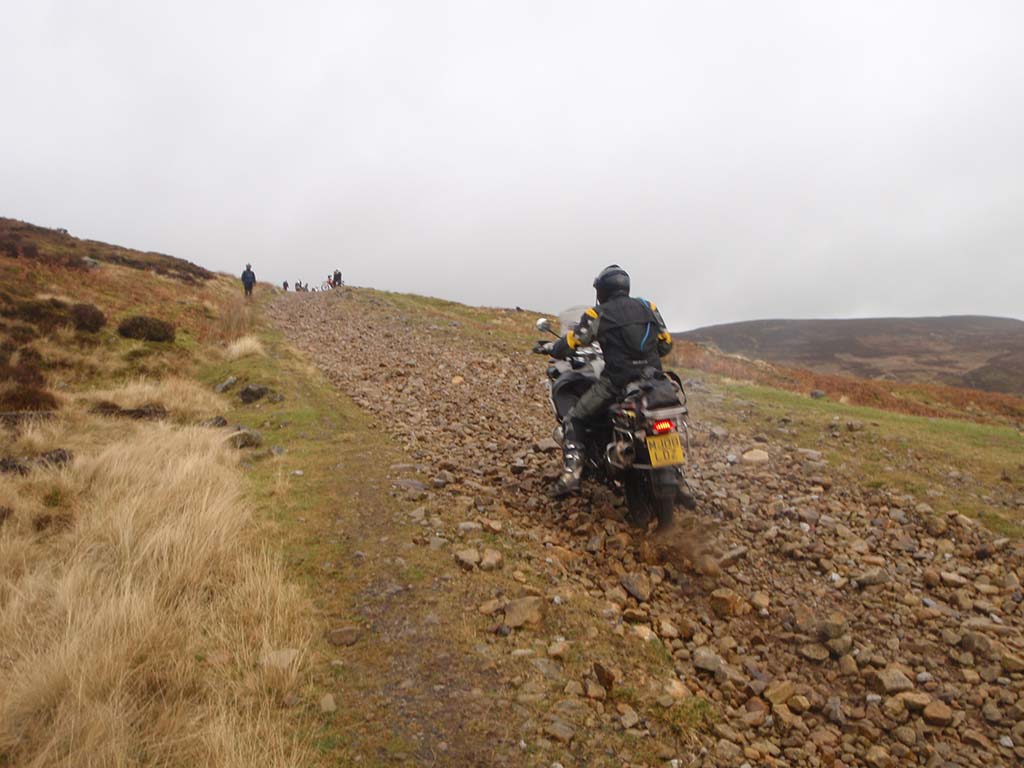 This is the most di. cult part of the trail, and extreme care needs to be taken on the decent. It’s advisable to stop the bike at the top and walk down to see what you’ll be riding over. The decent is over a lot of large, loose rocks. Under the rocks is a sandy base that can cause the bike to dig in when the front brake is applied. For the cautious, you may wish to put your bike in gear without the engine running and walk it down.

This section is fairly easy and a nice end to the trail before it reaches tarmac. It follows similar terrain to point 3.

The last 0.5-mile section is along tarmac that’s slowly deteriorating. The trail ends at the gate before the ‘proper’ single tarmac road starts. For the adventurous, turn around and do it in reverse. Take extreme care doing the rocky uphill 5-4 section – there’s no option to walk the bike up! 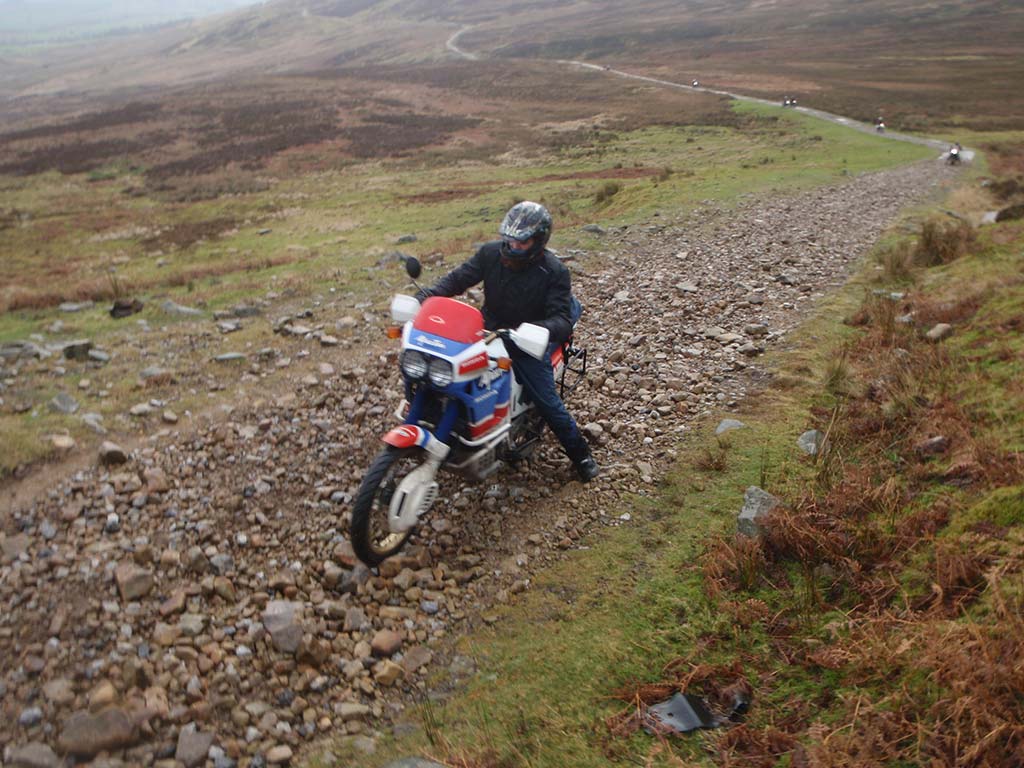 This trail goes by many names including the Salter Fell Road, the Hornby Road, and the Old Salt Road. They all refer to the same trail, and follow the course of an old Roman road later used by pack trains carrying salt and other commodities from from Morecambe Bay to the farms of Bowland and the Ribble Valley 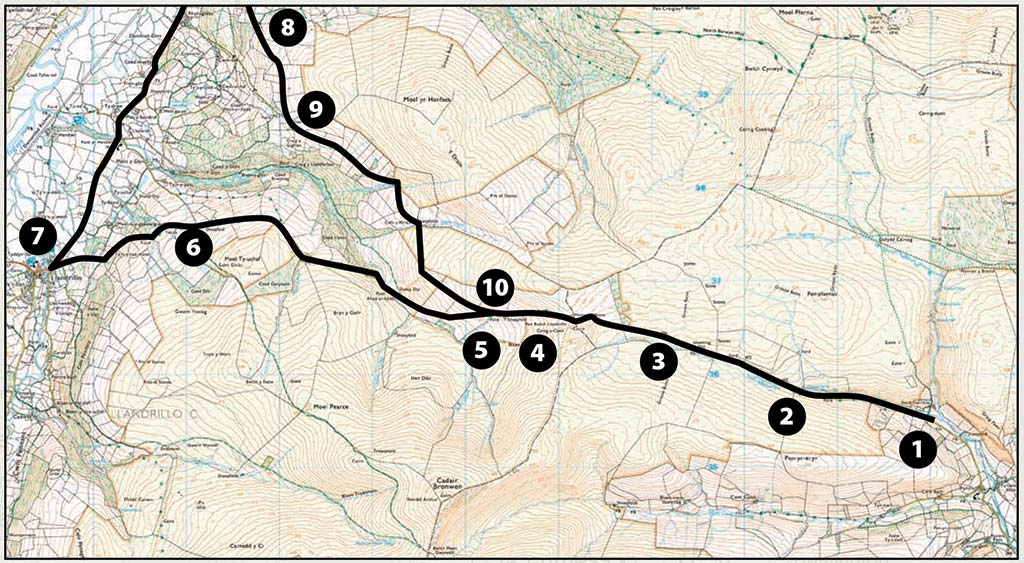 The Wayfarer Trail is located in the Berwyn Mountain range in North Wales. It’s a long trail starting near the village of Llanarmon Dyffryn Ceiriog (LDC) and ending in Llandrilo, although a loop from LDC can be formed creating a 20-mile route with 13 miles of trail riding. Allow at least one hour of steady riding to complete the loop.

The trail is roughly 6 miles from LDC to Llandrilo. It’s not regarded as a difficult trail, but due to some deep water splashes, a tricky slippery section crossing railway sleepers, and a fairly steep rocky climb to the summit, it’s suited more to competent trail riders.

The Berwyn range is an isolated and sparsely populated area of moorland. The area is wild and largely vegetated by heather about 1m thick, with some acidic grassland and bracken. Few hill-walkers or scramblers bother with this range as the peaks are much lower than those in nearby Snowdonia.

The trail does get a fair amount of motorbike and 4WD traffic though, especially at weekends, due to its length and proximity to other nearby trails in North Wales. 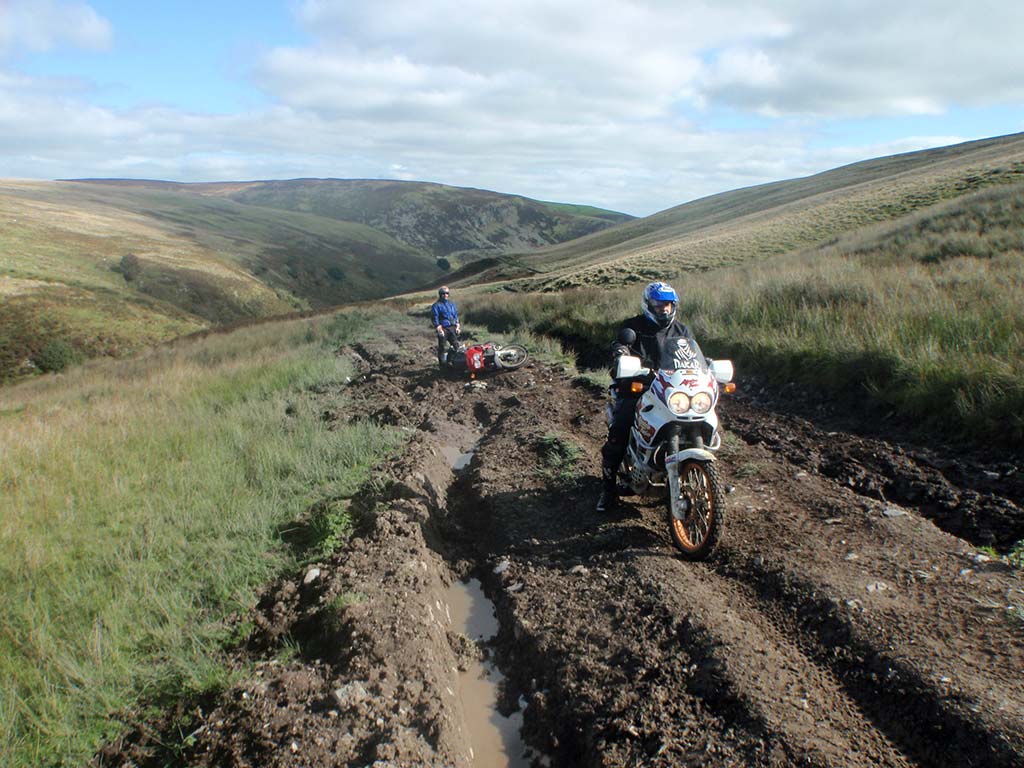 Distance: 6 miles
Nearest town: Llangollen to the north
Maps: OL Explorer Map 255 1:25,000
Start/end grid reference: SJ157328 (LDC) / SJ036371 (Llandrillo)
Difficulty rating (out of 5): 3
Wow factor (out of 5): 5
Other trails: There are miles and miles of fantastic trails in North Wales. (KTM and Honda riders will be pleased to learn that specialist dealer www.colwynbaymotorcycles.com is also within spitting distance) 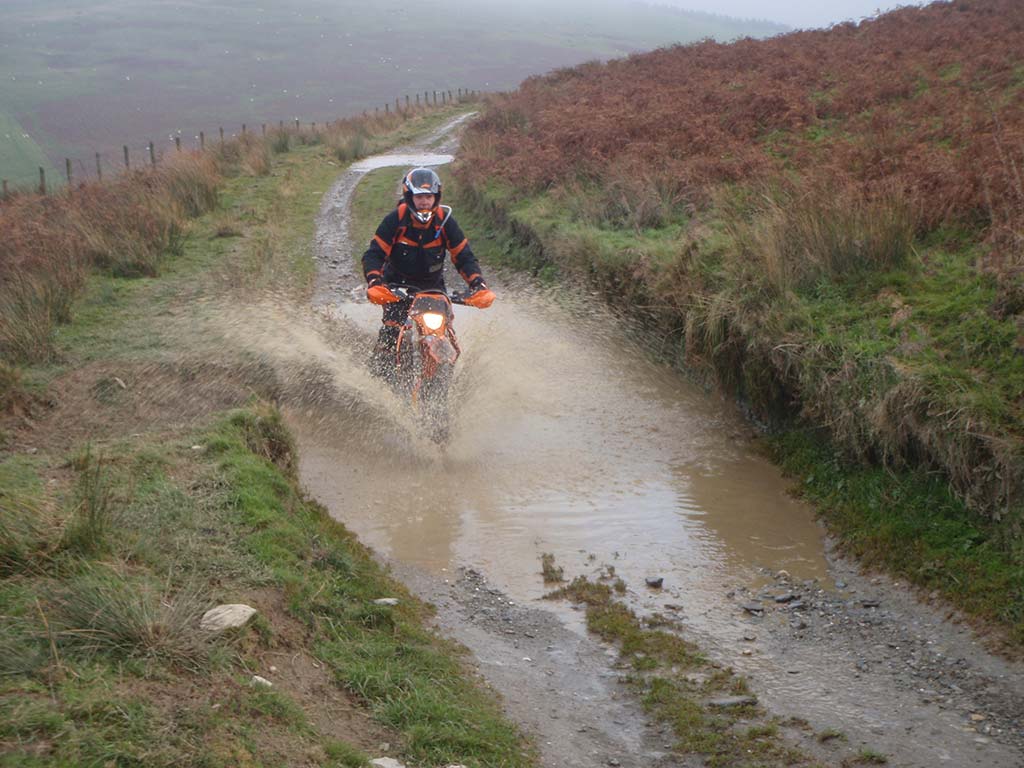 Entering the Wayfarer through a gate the trail starts as a simple farm track that leads up the valley to open moorland. The ground is hard-packed mud with occasional rocks and is relatively easy going.

Proceed through the next gate and the trail starts to get rocky. After the next uphill rocky section there are a few water splashes, which can rise to 0.5m in wet weather. The bottom is normally invisible as the standing water is peaty in colour; beware of submerged rocks. There’s also a boardwalk that’s been erected to span boggy ground. It’s very slippery and extreme care should be taken while riding it.

At the next gate the rocky climb to the summit starts. It’s not overly di. cult but there are lots of loose rocks and the bike will bounce as you pick the best route. At the summit, look back down the valley – it’s a great view! Find the Wayfarer plaque marking the top and sign the book located in the waterproof box.

Continue on the trail. It proceeds down a very rocky section. Take care as the bike will have a tendency to bounce around the rocks (this section is fantastic coming back the other way).

Through the next gate and keep left. The trail keeps on heading down before fording a small stream and turns back into more of a 4WD track as it heads sharply back uphill. Continue along it and eventually the moorland makes way for farmland. Here there’s evidence of farm traffic as the track turns rutted and muddy.

Continue straight on. There are lots of gates on this section. The very last part before the village is very steep and there’s a gate at the bottom of the trail. As the gate is located on a steep section, leave your bike in gear while you open it. I’ve seen several bikes dropped at this point! 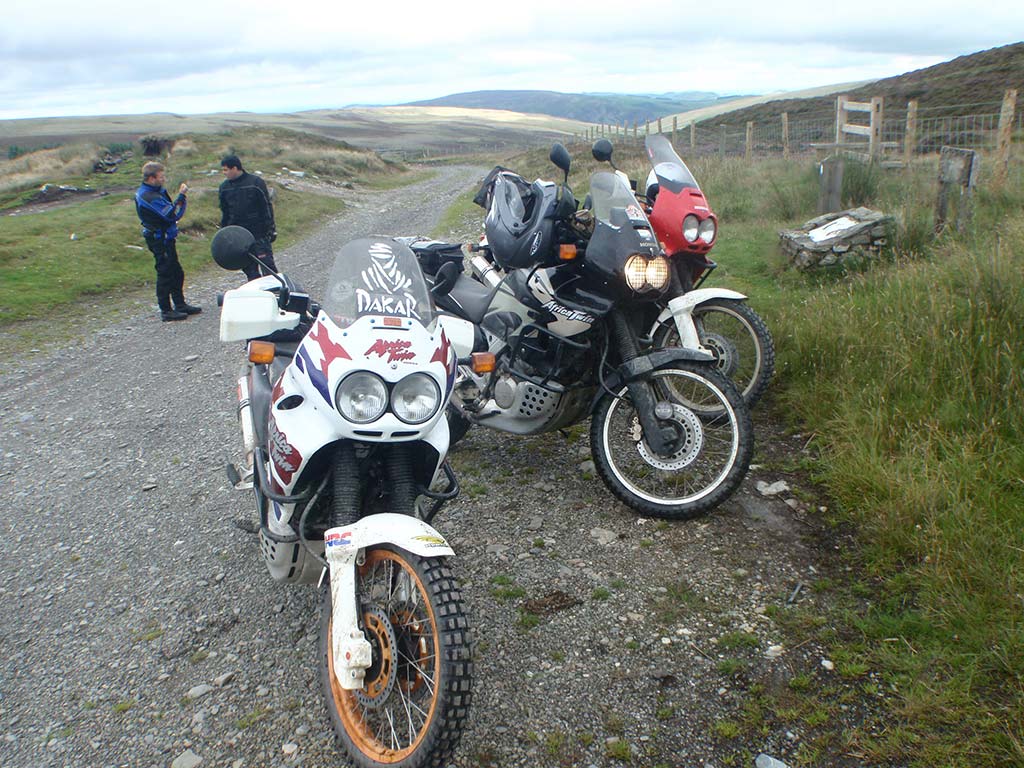 At the village, turn right and ride along the B4401 until the next section of this trail starts. Turn right and follow the single track tarmac road until it picks up the trail.

The trail winds up the hill following a farm track and is a mixture of muddy ruts and\ grass; it can be very slippery in the wet.

This section consists of a solid base and is very potholed with lots of loose rocks; it‘s not di. cult though, and considerable speed can be achieved as visibility for the trail ahead is good. Look to the right and you can see section 5-6 climbing up the hill on the other side of the valley.

Now continue back along points 5 – 1 in reverse.

Until the 1980s, off-road cycling was known as ‘Rough Stuff’. Influential cycle writer W M Robinson (1877-1956), pen name ‘Wayfarer’, was key to its growth and when the Rough Stuff Fellowship (RSF) was founded in 1955 one of its first acts was to arrange a memorial to him at the apex of the Nant Rhyd Wilym crossing in the Berwyns, North Wales, so giving the route its name, ‘Wayfarer’. The monument still stands today and holds a visitors’ book for riders to sign when they reach the summit