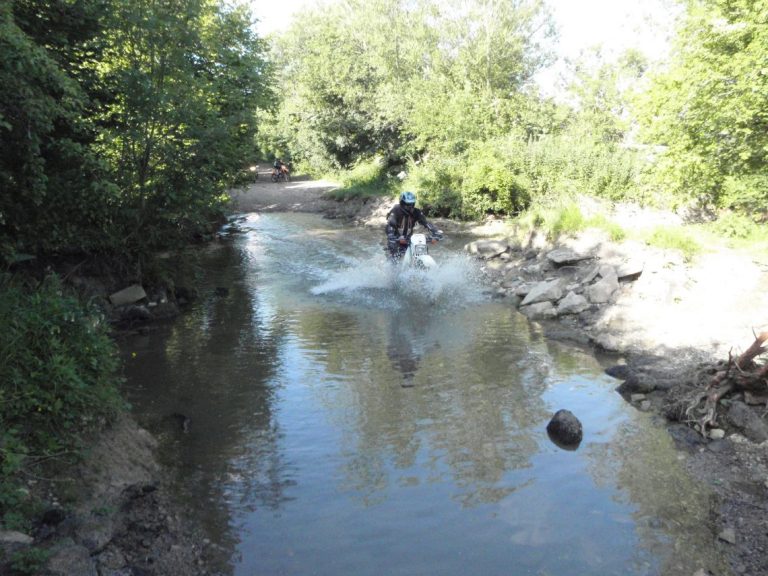 This month’s Trail Special proceeds along a section of the Fosse Way near Bath and follows a 29-mile route, with approximately 13 miles of rough stuff. The road sections that link the trail sections lead along some fantastic back roads through the scenic countryside, even passing through the historic city of Bath, and for most of the way still covering the tarmac section of the Fosse Way. The start is near Kemble, and the route ends South of Bath near Peasdown (the section south of Bath will be featured next issue).

The Fosse Way is a Roman Road that linked Exeter in South West England to Lincoln in Lincolnshire. The word Fosse is derived from the Latin fossa, meaning ditch. For the first few decades after the Roman invasion of Britain in AD 43, the Fosse Way marked the western frontier of Roman rule in Iron Age Britain. It is possible that the road began as a defensive ditch that was later filled in and converted into a road, or possibly a defensive ditch ran alongside the road for at least some of its length. It is an extremely direct route and from Lincoln to Ilchester – a distance of 182 miles – it is never more than six miles from a straight line. 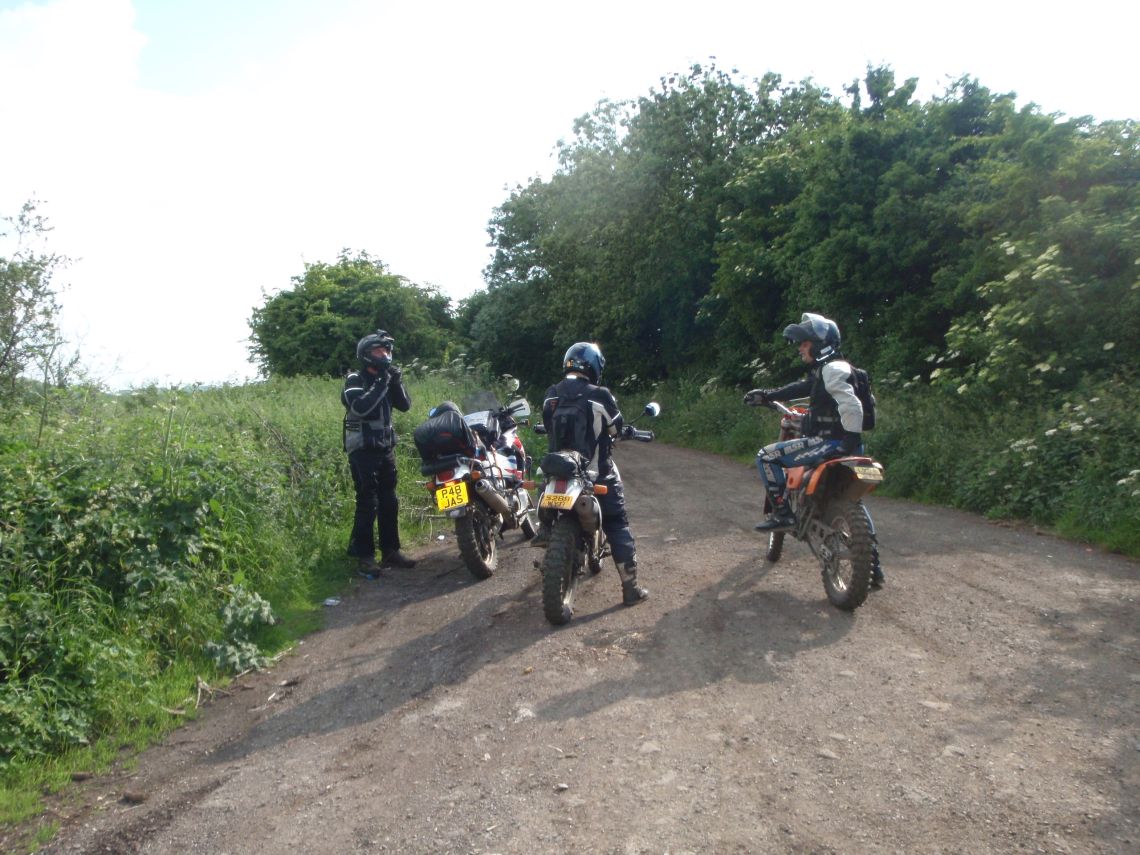 The Fosse Way now includes many sections, some modern roads and lanes (including dual carriageways) and some sections are byways, bridleways and footpaths.

The sections detailed in this edition of ABR are fairly straightforward and are graded 1-2. This is a fantastic trial for beginners. Please be aware though that I rode the trail in the summer months and most of it was hard-packed and dry, but this will obviously change in wetter months. The start is just South of the Cotswold airport. Unfortunately, the first section requires you to ride up the trail to a dead end, where it meets the airport perimeter fence. I was unable to see the airport through all the vegetation, but I’m sure this will be a different view in the autumn months and I would suspect a great viewing location for the planes in the airport.

The start of this month’s trail is very close to the end of the trail detailed in the last edition of ABR so combining the two will give a fantastic day out.

Heading south the trail is pretty muddy and overgrown below the overhanging trees. It is not difficult and the worst section is closer to the airport. Expect to dodge a few low hanging branches as you ride down the trail. The only way to get to the start of the trail – point 1 – is to ride from point 2 on the map to the turning circle just prior to the airport (0.72 miles).

The next section is along a hard-packed straight bit. This section is as easy an introduction to non-tarmac riding you will find. Continue to the next road. (0.65 miles) 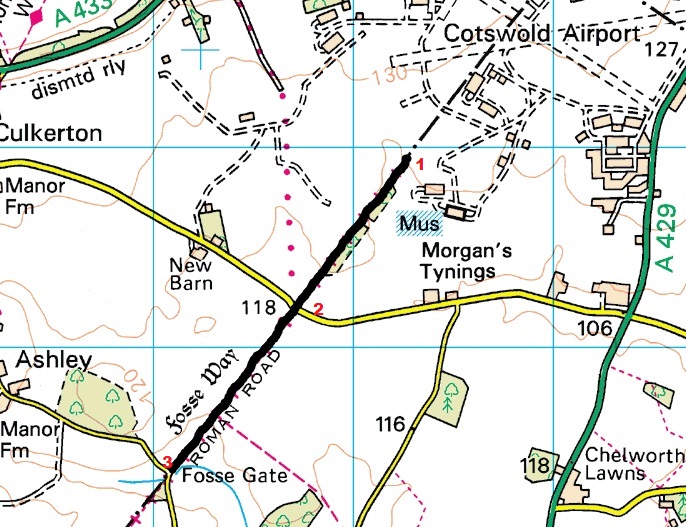 This bit is slightly muddier than the previous, but shouldn’t trouble anyone. It’s a nice long straight section through the Somerset countryside. Continue to the road. (1.27 miles)

Proceed along a long straight section (it is a Roman Road after all) for more of the same, hard-packed fairly easy trail. But be wary on this section. After approximately 200 meters there’s a crossing that you will not see until you are on top of it. There’s a farm building on the left with farm access track crossing the Fosse way. As it’s a fairly easy section there may the possibility to build up too much speed, and if anything is crossing the trail at the last minute you may not have time to stop. Please ride this section at a steady pace.

Keep going, there are trees overhead. After a further 200 meters, you will go over another farm crossing point. This time there is a gate in front, which should slow you down, but be aware that if the gate is open then the same danger exists as before. On the left there is a large solar farm. Continue to point 5. Be careful as you join a broken tarmac road at an angle. Continue down the bumpy broken road to the next road crossing. (0.85 miles) 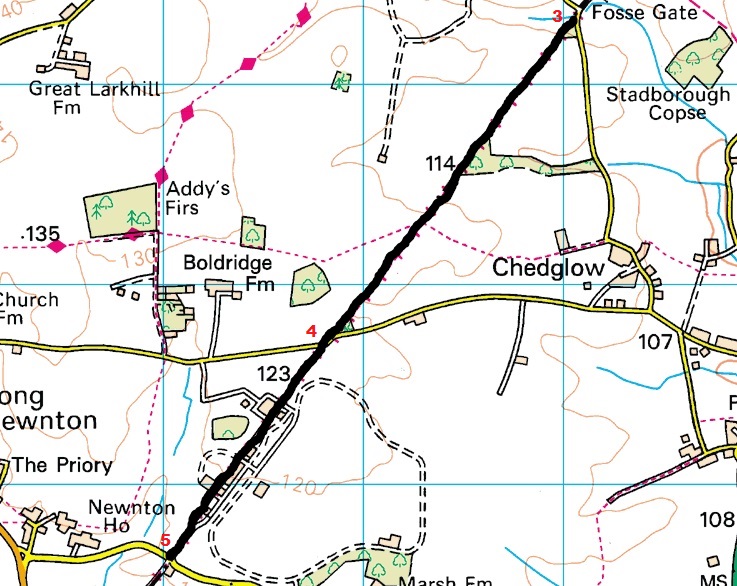 This section is again easy. Proceed to the next road crossing, but be careful as the tarmac road is hidden from view by trees and there could be traffic. There is the risk that you may ride straight out, and if there is traffic approaching it could end up nasty. (0.55 miles)

This section is marked on my OS map as a restricted byway, but my OS map is apparently out of date. The local TRF won the right to keep this lane open and it currently has a byway status. There’s a Ford sign at the entrance indicating that there is a ford 0.5 miles down the track. There are some potholes that are deep so take care on the way to the ford.

I’ve been told the ford is impassable after significant rainfall. It gets very deep. Keep left in the ford as it’s slightly shallower on this side. It was approximately two feet deep when I passed in the height of summer. If in doubt and you can’t gauge the depth by sight alone please walk it first probing with a stick if necessary. Continue along the trail to the next road crossing. (1.55 miles)

This is a gravel road and is very straightforward. Continue to the next road crossing. (0.5 miles) 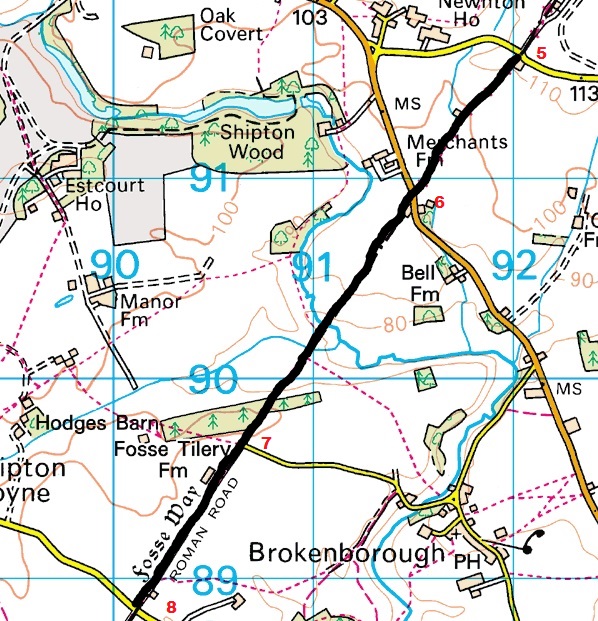 This section starts off as a tarmac road that soon turns into gravel, then mud. Continue to the next road crossing. (0.88 miles)

This section has a TRO for none motorbike traffic. There is a barrier to pass which states this fact. Continue along the trail and through the next bike barrier. This section is closed to four-wheel drive traffic due to the past damage caused further along near the ‘old’ ford.

As you cross the River Avon you pass the historic site of a Roman settlement. The River Avon used to be a ford crossing, but severe damage by 4×4 traffic closed this and there is now a bridge. The route has been graded, and the legal route has been changed from a straight Roman road to some 90 degree turns to force the traffic to slow down before crossing the bridge. Go over the bridge and uphill until you reach the next bike barrier. Through the gate and the route is again graded. This section ends after the next bike barrier before reaching the next road crossing. (1.34 miles) 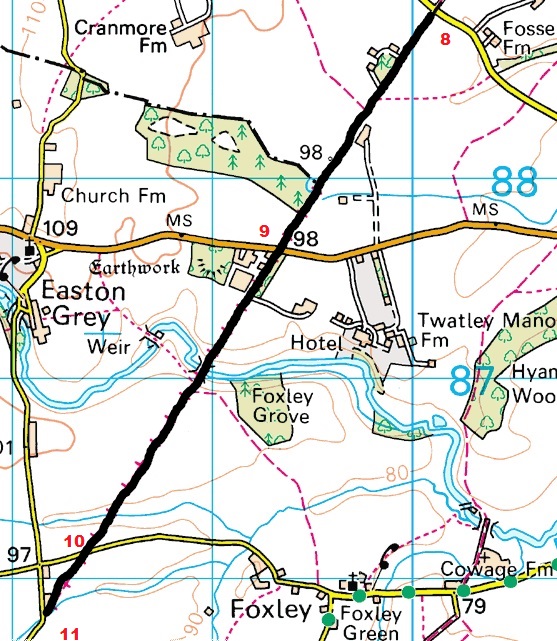 Proceed along a short road section to the start of the next trail. (0.25 miles)

This is a very fast section along a hard-packed base. Take care and remember the 20mph TRF advised speed limit. It is far too easy to open the throttle here, but be aware of the rough surface and the fact it is all too easy to hit a pothole and lose control. (0.89 miles) 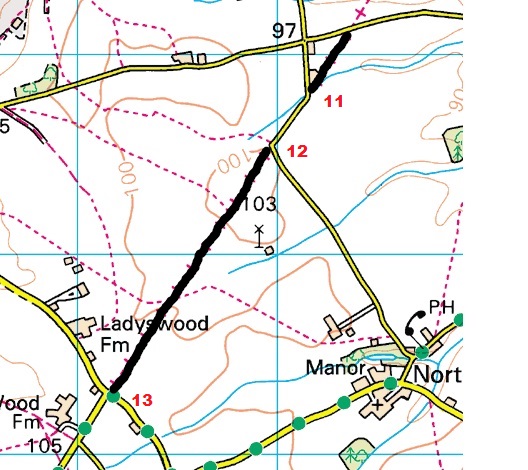 Join a tarmac B road for approximately 2.35 miles. There is another byway on the right, halfway along the road. I did not deviate from the Fosse way, but it may be worth checking out if you have time. 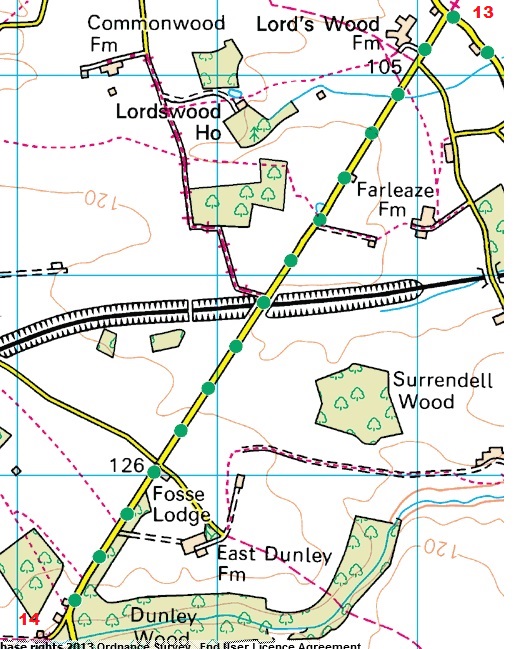 This section has a solid hard-core base. There are no gates and this is one of the easiest sections to ride of the entire route. (1.1 miles). The route south of Bath continues next issue. 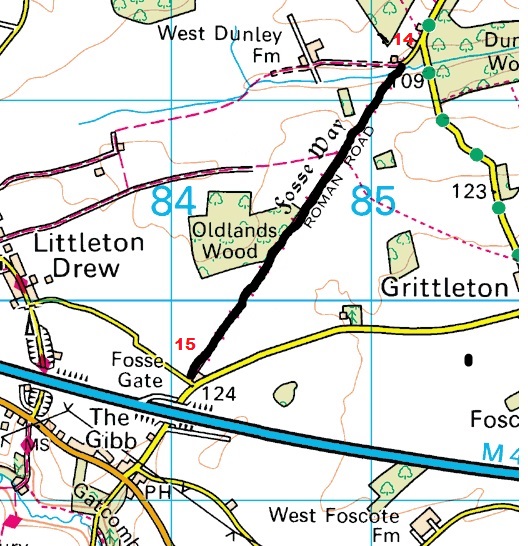 At Easton Grey (where the trail crosses the River Avon between points 6 and 7), evidence of a small Roman town was first established on an important river crossing and possibly have ramparts, four gates and stone buildings. The Roman settlement here survives as buried features such as building foundations, streets, rubbish pits and ditches. Roman finds from the area such as ceramics, roof tiles, coins and sculpture fragments indicate that the site was occupied between the first and fourth centuries AD.

The most recent excavations close to the river revealed substantial and well-built stone structures. It has been suggested that the settlement may have had a military origin, perhaps as a fort protecting the communications and supply routes along the Fosse Way. 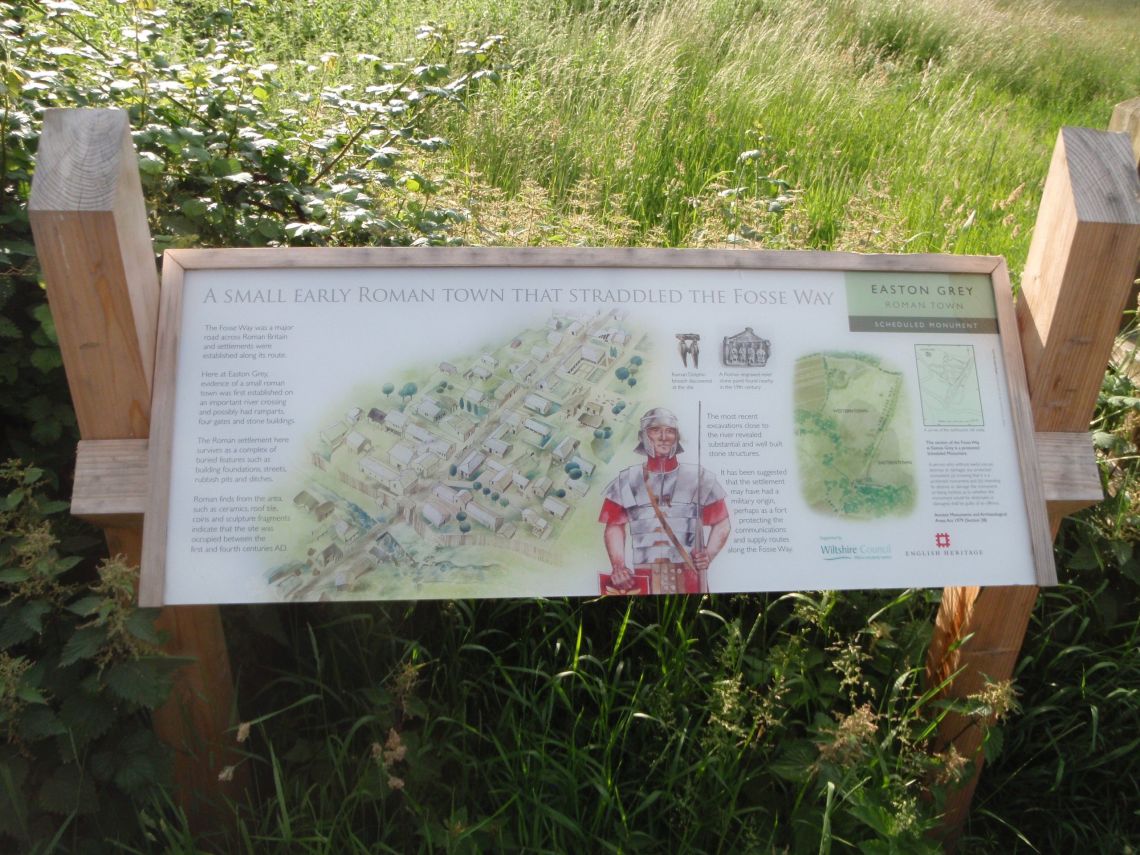