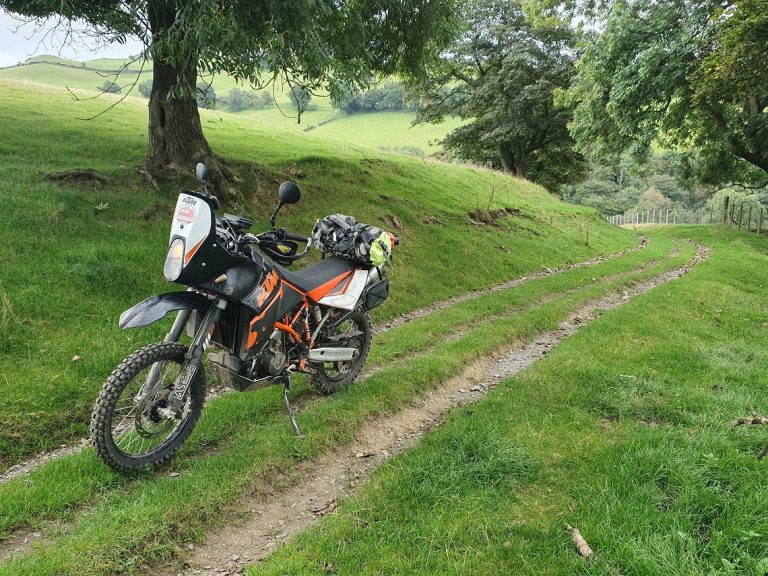 These two fantastic byways open to all traffic in North Wales form a cracking circular loop. Both are fairly straightforward and could be ridden by novice trail riders if care is taken, although in the wet I’d suggest knobblies.

1-2
Go left, pass a couple of houses and continue through a gate. The lane starts as a hard-compacted mud base which will be slippery in the rain. You ride beneath trees on a fairly wide track. Head through another gate and you are now entering fields. Follow the shallow ruts created by 4×4 vehicles, or the common third motorbike line in the middle. Pass a farm on the left and proceed downhill slightly to the next gate.

2-3
Head through the gate and then through another. The trail heads left passing through a shallow ford. As you leave the small wooded area behind, you now ride uphill along a well-defined rocky track. There are cracking views off to the left but resist the urge to stop because there are even better views at the top.

You’ll know when you’ve nearly reached the top as there is yet another gate. This is a good opportunity to stop and take a look over to the left. In the distance, you can see the Great Orme near Llandudno on the coast.

3-4
Proceed through the gate and up a short steepish section which leads to a gentle climb all the way to the top. Continue riding the ruts to the gate at the end. The ruts are a few inches deep so once you are in one, stick to it. Once you crest the very top of the hill, its downhill all the way to another gate and the paved road beyond. 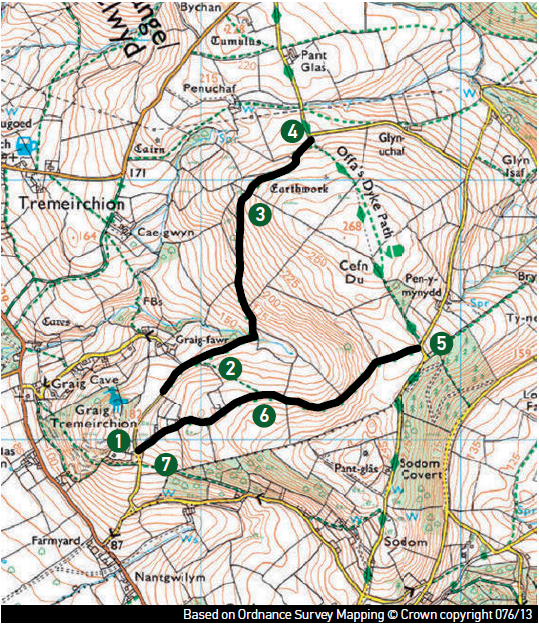 5-6
Go through the gate and the track heads through an open field with two deepish ruts to follow. As you get to a steeper section, more ruts appear so pick one and stick to it. Keep on heading downhill. Head through the final gate once you reach the bottom of the field.

6-7
Continue on a level track all the way back to where you started the first lane.

This route can be split into three sections. The first lane (1-4) and part of the second lane (5-8a) are very easy.

In the dry, they could be attempted by people of all abilities with any tyre if care is taken. In the wet, I’d suggest knobbly tyres are required.

The third section (7-8b) is really only suited to more competent riders. I’ll admit, after a break from riding last year, this section had me sweating. In the end, doubt set in, so I turned the engine off and waddled the bike down the steeper section whilst in gear. If you’re confident riding it, then go ahead, but there’s no harm in taking a cautious approach, at least on the first run.

1-2
Leave the paved road and join a wide trail running below trees. There are no gates on this trail which is a rare treat for someone who usually rides in areas peppered with them. This section is easy riding with great visibility of the lane ahead. There are occasional shallow ruts but nothing too troublesome, but I’d expect this will be different in the wet. Watch out for the occasional low hanging branch that needed a quick duck to get under. It’s easy to gather speed as you travel through this section but be careful of dog walkers.

T 2-3
The overhanging trees become replaced by bushes on either side, and as been as the sunlight can now reach the ground, there are grassy areas on this section. When you see a house approaching on the right, slow down as you will shortly cross a tarmac access road for the farm to the left.

3-4
Go straight over the road and continue on the well-defined route. It becomes slightly narrower in parts but nothing to trouble anyone. The route remains pretty much the same all the way to the end of this section. Keep an eye out for red kites as I had a great display for five minutes on this section.

5-6
Leave the paved road behind and join a well-defined trail. There’s a sign stating ‘unsuitable for heavy goods vehicles’ which is always a good indication of a legal trail. The track is wide for about 50m until it passes a field gate on the left.

Here it becomes slightly narrower. The surface is well compacted and graded as it runs between bushes and trees. There are occasional small rocks but the riding is fairly easy and straightforward. 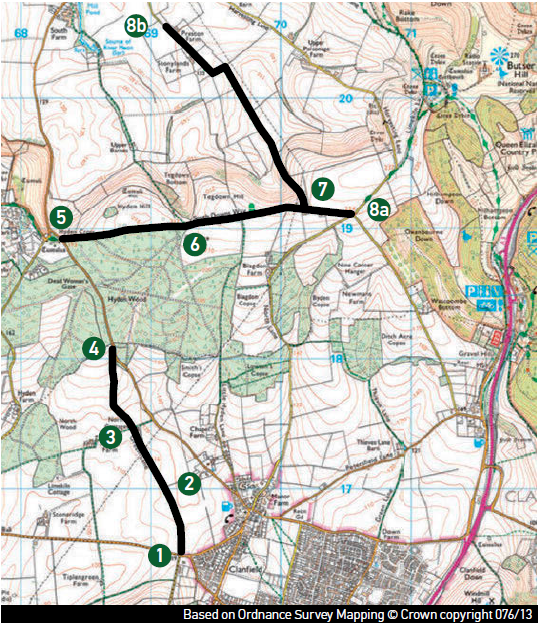 6-7
Leave the trees behind and you are now riding between fields and everything feels more spacious and open. There is great visibility ahead and it’s easy to pick up speed. As you near the end, there are great views over to the valley on the left. At a farm building, you have a choice to make.

7-8a
It’s an easy finish to the paved road. Choose this option if you are a novice.

7-8b
Ahead is a steep, narrow, rutted descent. I’ll be honest, with a fully loaded KTM 950 I chose to slowly paddle the bike down with no engine running. I was sweating at the bottom. I wouldn’t have fancied riding up the other direction either, but I’ll let you decide if you’re up for the challenge.