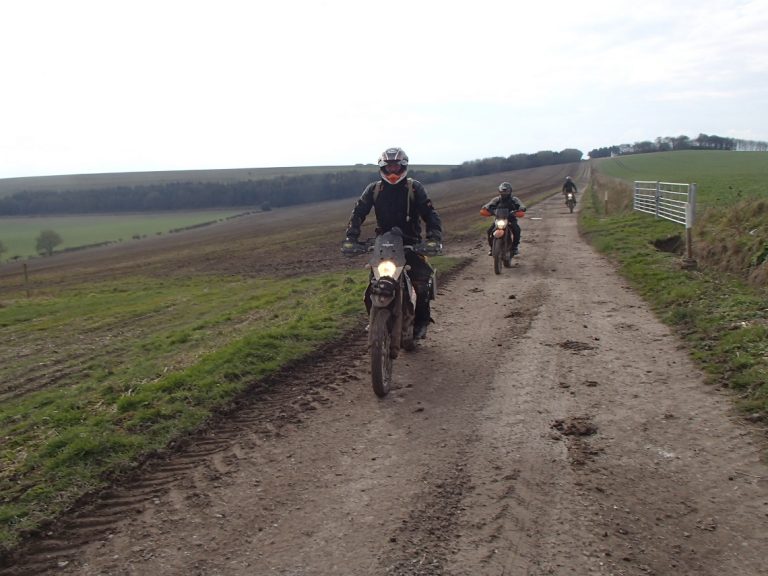 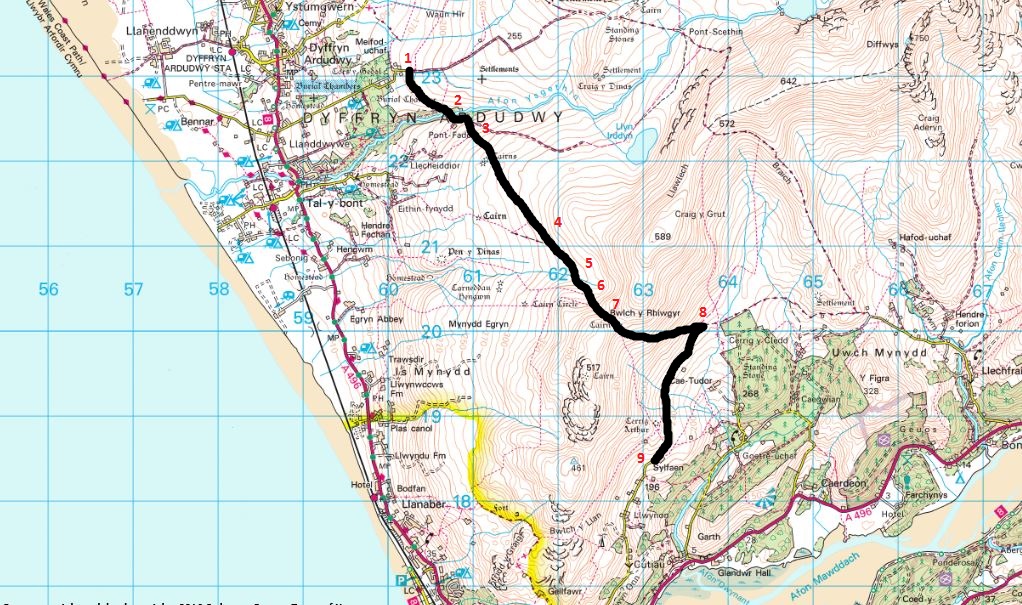 This is a fantastic trail, though it’s more suited to the smaller enduro bikes out there. I’ve been over it on a KTM 950 SE the way it is detailed in this article, and in reverse on a Husky TE630, both times fully loaded with camping gear. The SE needed a push and shove in a few places but the Husky managed it unaided, though I wouldn’t fancy riding the SE up the other way. It really is a tough trail, but the views from the top are amazing.

The route is very slippery heading up until the rocky section starts, then it becomes really difficult. It’s steep and rocky for a good 50m, then there are some very deep ruts before you’re finally rewarded with the incredible views down and across the Barmouth estuary. The descent is great fun, single track with some erosion ruts (no 4×4 will make it up this trail), with plenty of tight switchbacks and steep drop-offs, should something go wrong.

Needless to say, don’t get distracted by the views! The official name on Trailwise is “Bwlch Y Rhiwygr” (yep, I can’t say it either). When I told “Luckiegar” where the trail was he replied with “ah, Bastard Hell, I know it well”. So this name has stuck and it really suits the trail. If this trail isn’t enough torture then check the map out and have a go at “Pont Scethin” which runs over the mountain to the east.

I’ve attempted this from the north on a KTM 950 Adventure, which resulted in a burnt-out clutch. I can’t comment on the rest of the trail, except to say the first part requires riding up some slippery steps, across a narrow rock slab with steep drop-offs, and then up a muddy steep hill to where my clutch gave up the ghost. I’ve been told there’s a really narrow gate at the top. Have fun!

Proceed through the gate and over a small stone bridge. The road heads left towards another gate. Head through this and the track continues straight on at the next tarmac left-hand bend.

Head uphill along a slippery grass lane. It is fairly tough going on bigger bikes. There’s very little traction so it’s best to try and keep momentum going. The trail starts wide enough but soon narrows to a single track. There are ruts and plenty of slippery bits to negotiate. Continue to the gate. There’s no real evidence of this trail getting much traffic.

Proceed through the gate and again the going is tough. The track splits in two as it heads uphill. Neither way is straightforward. Try to keep momentum going otherwise you will quickly lose traction in the soft ground. Head towards the gate in the distance.

Through the gate follow the rocky single-track path. You will see the trail starts to become more difficult in the distance. Give yourself plenty of time and pull up short. Walk the next part and see what you think. It’s not easy, hence the ‘bastard hell’ name. If you’re on a big bike you will need help on this section. If you’ve really struggled so far, it’s probably a wise move to turn around now. Luckily the next hard bit is only 50-or-so metres long.

Straight after the hard section, there are plenty of ruts. Again, it’s best to park up and walk forward 50m to check the route. If you get in the wrong rut here you will have to lift your bike out, they are pretty deep! After this, it’s plain sailing to the gate at the top. Time to sit back and admire the view looking down to Barmouth estuary. It’s fantastic.

It’s single track all the way to the bottom with some pretty tight switchbacks to negotiate. This is really good fun, but try not to get distracted by the view. This bit in reverse is a good challenge. Pick your bike though, I wouldn’t fancy it on a big traillie. If you’re going to attempt it you need to make it to the top in one go, there aren’t many (if any) places for a break. And it’s a long way so your arms will be pumped by the time you get to the top.

The last bit is a gravel farm track that is easy going all the way to the tarmac. If you head into Barmouth there’s a wooden bridge spanning the estuary with a railway crossing it as well. I’m not 100% sure on the legality of riding it.

I’ve read internet reports that it’s fine for motorbikes, and there’s plenty of online evidence to prove this. We decided to ride down the path to the toll booth, but it was un-manned. 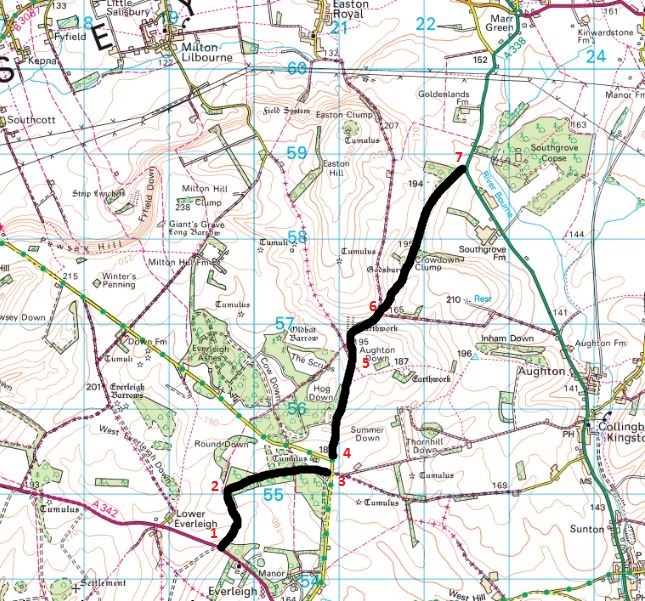 In the last issue, we detailed a trail passing Stonehenge, and in this issue, we focus on another couple of trails in the Salisbury area. As previously mentioned, the scope for legal trail riding around Salisbury is fantastic. There are byways all over the shop. I’ve never ridden a place like it before. It’s alien to me to have so many byways in such a relatively small area.

I’m used to having to ride for an hour before I even reach a green lane, and then having to spend a few miles on tarmac between the trails linking the individual lanes together to form a decent route. Just be aware that you really need to stick to the legal byways whilst crossing Salisbury Plain.

Do not just veer off and ride un-signposted tracks, or those not marked on maps. There are plenty of illegal routes crossing the Plain that you should not use (these are used by the military). If you do get caught by the military roving patrols, expect to be penalised.

The route detailed here is fairly straightforward and, bar one really slippery downhill section (5-6 on the map), should not prove too overwhelming for the novice trail riders out there. Use this route as a start, but it’s well worth taking a look at a map and checking www.trailwise.org.uk for other legal routes in the area.

Be warned that a few trails crossing the Plain may contain some water and lots of mud depending on the time of the year. Take it steady and it’s always worth gauging the mud crossings on foot. I managed to enter a ‘tank pit’ and got my 950 well and truly bogged down. Only a passing 4×4 could free it… Seriously, it was that bogged down!

Start at a tank crossing (how often can you put that in a green lane description). The trail starts as a hard compact track crossing the Plain. There’s some loose rocks/gravel but nothing hard. The going is pretty easy. You will pass a track joining from the right, continue straight on, skirting the woods. Before you proceed round a right-hand bend, you pass another track heading off to the left. Keep going straight, all, the offshoots are military tracks and are not marked on the OS map.

Continue right into the woods. You will pass more trails heading off in all directions. Stay on track, no matter how fun they look. The going is more muddy now and there are some large puddles. Continue straight on, there’s still lots of muddy conditions,  nothing too serious though. Halfway through the woods, the track becomes a bit more solid with grass in the middle. There are less puddles now but this is only short-lived as the track soon reverts back to less grass and a few puddles. Still, nothing difficult to contend with. Continue to the road.

Short bit of tarmac to next trail. The trail starts on a sharp left-hand bend, take care crossing over the road to the trail.

The track has a hard compact base to start with and leads you between farmers fields. Proceed downhill and there are a few puddles. There’s a few loose stones but nothing difficult. A track heads off to the left, but you should continue straight on. Head uphill between trees, there’s a washout in the middle which you need to be careful of, though it’s great fun to bounce across. The track gets even easier as you proceed along it. Pass a byway off to the left which is worth exploring if you have time.

Head round the corner to begin a descent. The trail becomes a bit more technical now so take care. It’s deceiving, getting a bit steeper than you realise and has a very muddy chalk base. You may have a bit of speed by the time you get to this bit so natural reactions are to hit the brakes. This will be disastrous as it really is slippery.

Pass another byway heading off to both the left and right. Again, worth exploring if you have time. The trail ahead is hard compact with grass in the middle all the way to the end. It’s fairly fast-flowing but be wary of farm traffic. Head downhill and to the road where this trail ends.

If you turn left and blast for a few hundred metres there’s a good café on the right, perfect for a brew and a bite to eat. Continue on to the roundabout where there’s a petrol station if you need fuel.