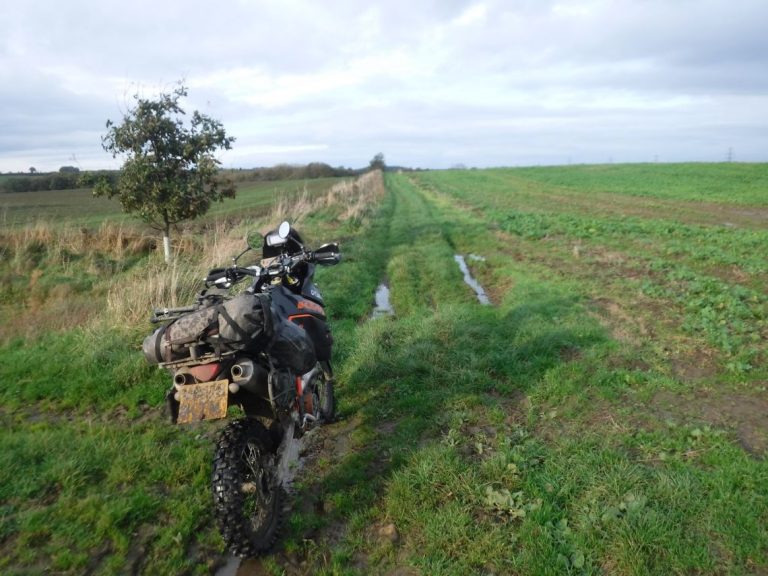 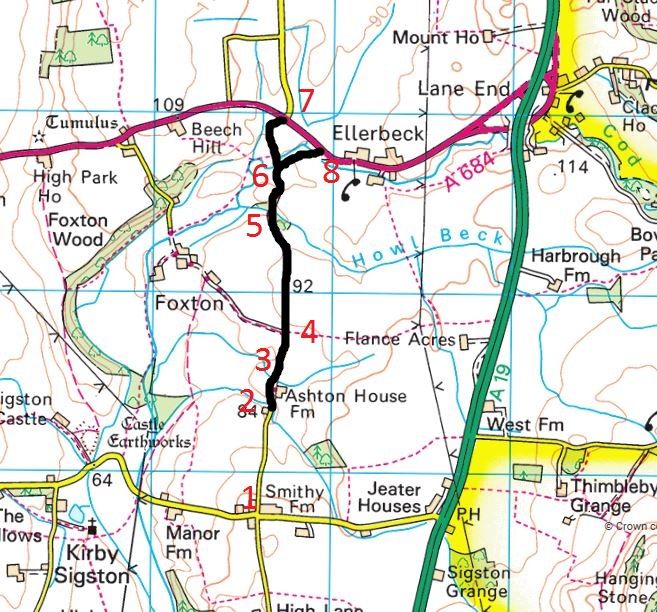 This may not be a long lane when compared to some listed in ABR, but it has to be one of my favourites. It’s not challenging and some may wonder why I class this as one of my favourite lanes. To me, this lane represents a true British green lane.

It goes from farm tracks to farmers’ fields, to single-track, all in the space of less than two miles. It has muddy parts, ruts, goes between trees, is overgrown, has fords and passes through some great countryside. Plus, it doesn’t have any gates. I always make a point of riding this trail when I pass through the area. It’s slap bang in the middle between the Yorkshire Dales and the North Yorkshire Moors. 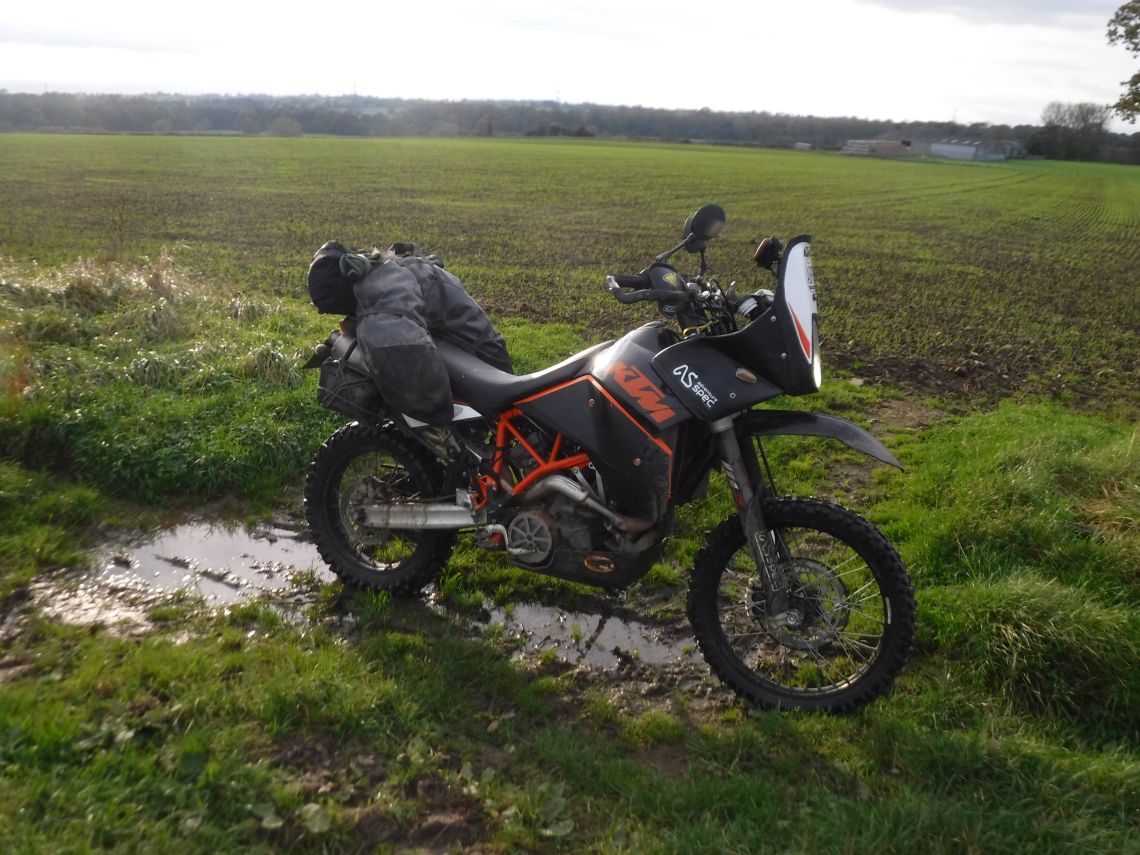 You access this lane by heading along a single-track tarmac road, identified by the no-through road sign. Towards the end of the road, you pass a house on the left and immediately go through a small shallow ford. At the next house on the right, the trail starts heading straight on. It’s obvious where the trail is on the ground.

The trail is immediately rutted and muddy, and follows the fence line of the house on the right. It heads between bushes and trees, but this quickly opens up to the left offering views over the farm fields. The going is tight in places and it appears this route doesn’t get much four-wheel-drive traffic, as it’s very overgrown in places.

Keep heading straight on beneath the trees, its like riding through a tunnel at points. The base of the track is wide and fairly solid (mud), but there are low overhanging branches. It soon turns back into a rutted track, so maybe it does get more traffic than I originally thought.

You are now out of the tight, overgrown section and on a well-defined farm track. Left heads to the farm. Continue straight on and head slightly uphill. Where the track seems to do a 180 turn, continue heading straight on.

The track should be obvious; basically, if you stick to the track and do a hard right-hand turn you have gone wrong. The track ahead is green, but don’t be fooled, the grass hides some deep ruts. Pick one and keep going. You are now riding between fields. Keep heading towards the trees in the distance. The track varies between mud and grass.

Proceed out of the fields and head back into trees as you head slightly downhill. Pass through the small ford and keep going. It’s nice, tight and overgrown in places, which makes for really good riding. You’ll then be back beneath trees and riding along single-track once again. Then, head along another field boundary with grassy, shallow ruts.

Here you have an option to go left, through a largish ford (its normally shallow, a couple of feet deep with solid base). After the ford, you’ll find an easy farm track to the road.

Alternatively, you can continue straight on. Pass through another ford, then progress on an overgrown uphill section to the road. Take care when getting close to the road, as it’s always pretty busy and traffic tends to move along at a pace. 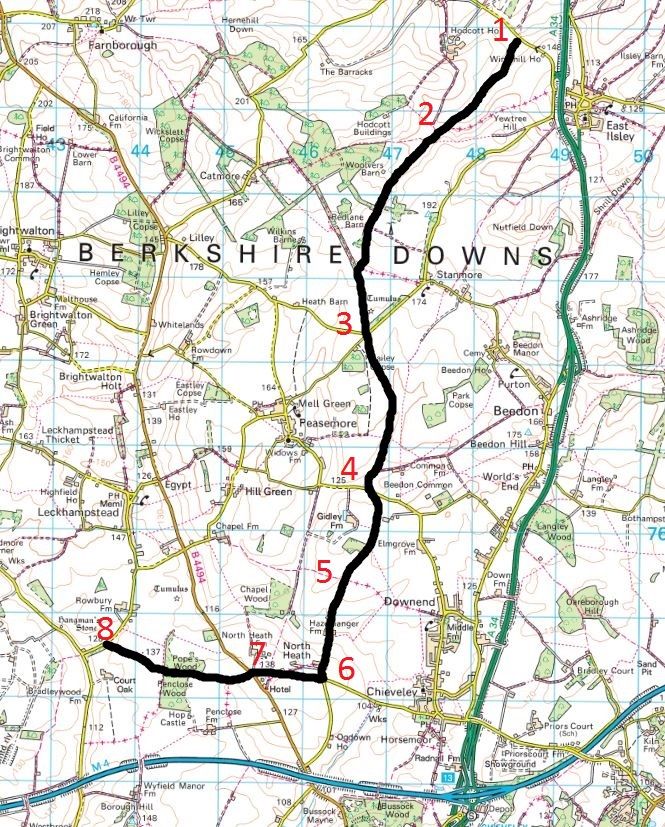 The area to the south of Didcot (near Oxford) all the way down to the M4 corridor is littered with trails throughout the Berkshire Downs. I’ve rarely seen so many byways marked on OS maps before. It’s an area that I’ve wanted to ride for a long time, so a trip was planned to ride the trails and I wasn’t left disappointed.

What grabbed my attention initially was the Ridgeway, as there is a large section directly south of Didcot that hasn’t been subject to a TRO (as much of the Ridgeway has these days). Unfortunately, a quick check on Trailwise pointed to that particular section having a seasonal TRO, so it was out of bounds when I visited the area. Not a problem; as previously stated, there are byways everywhere.

So many, in fact, that I didn’t bother checking them all on Trailwise. There was enough, so if a few were closed then it wouldn’t be an issue. Detailed here is just a start, but at seven and a half miles long it’s a fantastic start. Grab an OS map and go exploring. You won’t regret it. 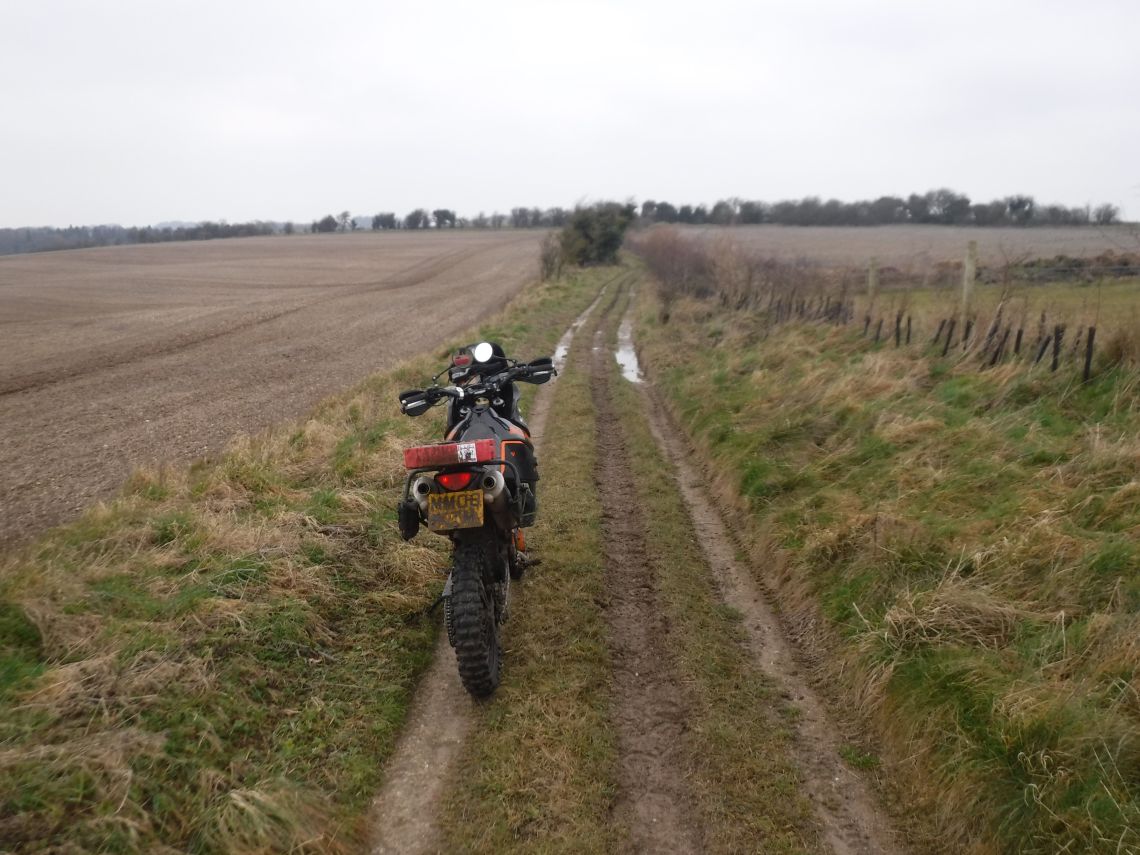 The first section starts just outside the small village of West Ilsley and, on Trailwise, goes by several names depending on where you are on the trail. They are Windmill Down, Woolvers Road, Dark Lane, The Broadway and Old Street.

The trail starts from the main road and has three ruts to choose from. There’s a fence on the left (with farmers fields beyond) and trees and bushes on the right. Go for the middle rut, I went left, but it’s pretty close to the barbed wire fence, and right is close to the trees.

The going is soft, but not too bad. The trail goes from rutted to muddy, and is pretty much on a single level all the way. Ruts come and go, which doesn’t enable any sort of speed to be gained and it keeps going like this to the end.

There are lots of muddier sections thrown in, so take care. The lane seems to go on forever and isn’t the easiest on a big bike, but it is possible. It’s tight in places and you have to duck down on a few occasions.

A byway joins from the left. At this point the route becomes a bit easier and you can gain a bit more speed. Although I didn’t ride the byway off to the left, it does look easier, so if you want to bypass the tighter section I would suggest starting from the trail that approaches from the left. As you proceed, the trail becomes less rutty.

Once out of the trees you pass between farmers’ fields with great views all around. The section is pretty straightforward, but soon enough you are back into trees and the going becomes a bit harder once again. You will pass a byway to the left and soon join with another byway from the right. Feel free to go exploring. Continue straight onto the road.

Continue straight over the road. You will see bollards in front and a sign that has a car with a line through it. I took this to mean no cars on this section, which the bollards would also point towards. This lane is called Old Street Lane and is a lot narrower and for the most part is single-track, with overgrown sides that will only get worse when plants are growing, along with a few low branches.

There’s a single, middle motorbike rut to follow. It has a muddy base, but is not too difficult to ride. There are a few puddles and sloshy sections, but again, these aren’t too bad. It eventually gets a lot worse though, with plenty of muddier ruts. The trail flattens out and is easier towards the end. Proceed through the bollards, turn left at the tarmac road and then immediately right.

You are now on Gidley Lane and this sections starts with a wide, solid base. Continue past the houses on both sides. The muddy track now keeps heading forward. It’s pretty wide between trees, there are no ruts and it’s relatively easy going. Continue along a hard compact base with a few muddier sections (nothing too difficult).

You pass a byway off to the left that looks rutty! I didn’t do it, but feel free to go exploring. At this point you pass over over farm tracks. The legal route only goes left along the byway (not left on the farm track) or straight on. It’s pretty obvious once on the ground. Continue straight on along a solid wide base between trees.

This bit is a faster section that is pretty straight with a few light bends. Eventually, you will pass a house on the right. The track becomes easier now, and soon turns into a well-graded route. You’ll pass a byway to the right, which you can take, as it leads to the same point as going straight on and left. I continued straight to the tarmac.

Join the tarmac road and head about 50m or so and then take a right turn onto the next byway, which is called North Heath Southside. This eventually leads into North Heath Westside.

Proceed through the car park bit. The next bit is rutty from the start. They are shallow ruts, but they look intimidating when approaching from the car park.

Pick one and keep going. It’s fairly wide with bushes on the left and once the track opens up a bit it gets a lot muddier. Stick to the track, no matter how tempting to go off piste on the grassy bits. Don’t.

The trail heads straight through a grassy field now. The route is obvious and is both muddy and rutted. Eventually, you join a well-graded road, which ends at the tarmac. Take a right turn, then left onto the final trail.

The final section is called Via Popes Wood and starts tight and overgrown with deep ruts and hedgerows close by. Pick the middle rut. Head into the wooded area where the byway splits. I went right, but feel free to go left and take a look. There’s a mix of ruts now and the going is muddy. Soon, you pass another byway off to the left. I continued straight. It’s pretty muddy and rutty to the end now as you proceed between farmers’ fields.