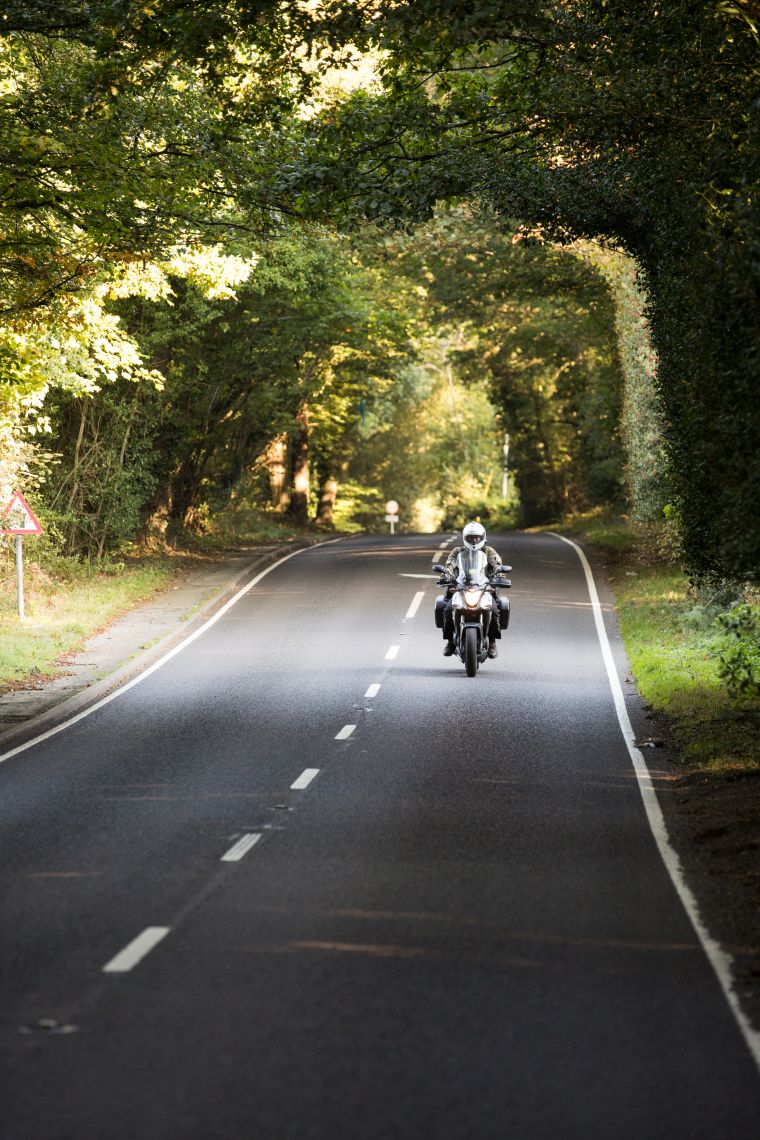 Over the last few issues of Adventure Biker Rider magazine, we’ve teamed up with TomTom to bring you a series of Discovery Routes that are all about exploring the most beautiful and exciting riding destinations the UK has to offer.

From the desolate wilderness of Dartmoor to the pristine beauty of the Yorkshire Dales, we’ve journeyed through stunning landscapes and experienced exhilarating rides to rival anywhere in the world.

Our latest journey took us 125 miles along the length of the South Downs National Park, from the seaside town of Eastbourne on its eastern fringe, to the cathedral city of Winchester in the far west. Having lived in London for many years, I’ve ridden through this part of the world on numerous occasions, but I’ve never taken the time to fully explore the South Downs.

In doing so I was reminded that you don’t need to seek out far ﬂung places to experience a truly wonderful motorcycle ride when national parks like this are on your doorstep. 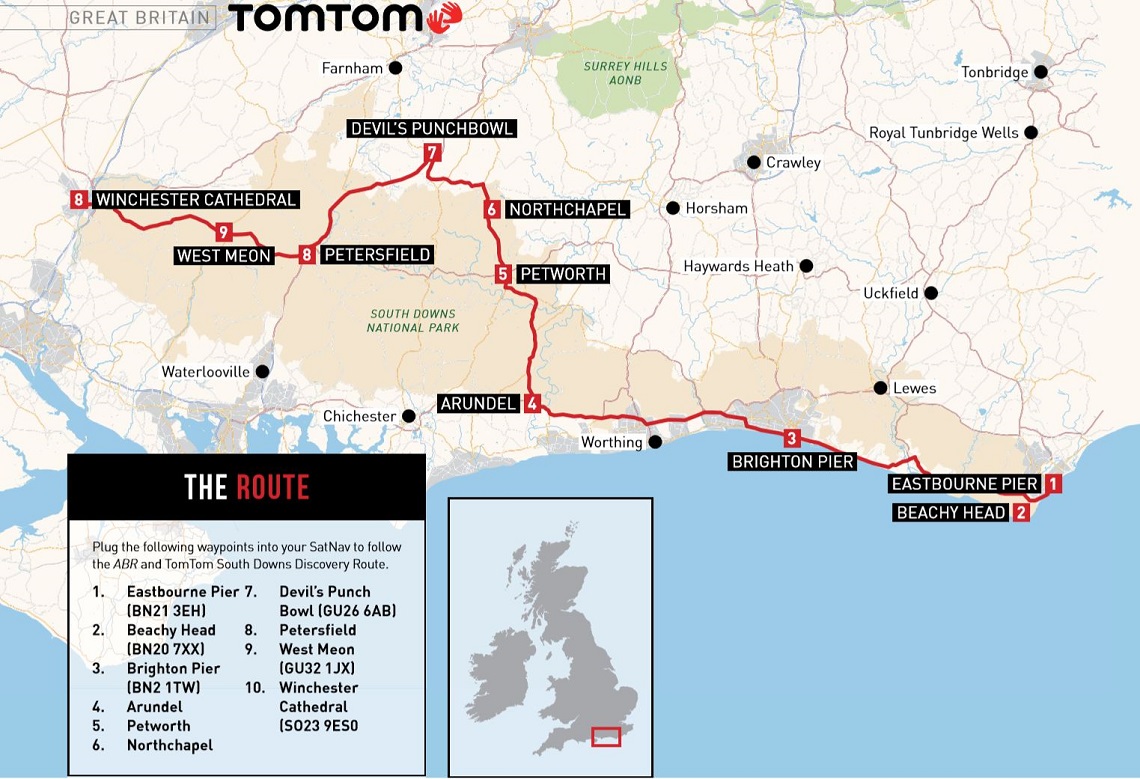 Map of the route

The route naturally splits into two sections, coast and countryside. It begins with a leisurely cruise along the south coast through kiss-me-quick seaside resorts and along dramatic cliff tops.

This section dips in and out of the national park but is well worth the ride to breathe in bracing sea air and marvel at spectacular views of the English Channel.

The route then leaves the coast behind and diverts inland past Arundel Castle, which wouldn’t look out of place in a Disney movie, before weaving its way through picturesque countryside, chocolate box villages and historic market towns.

Just outside the national park in the north, you’ll find yourself at the Devil’s Punch Bowl, an impressive natural amphitheatre so named because the Devil himself is supposed to have dug it out of the earth.

From here, there’s a smorgasbord of country lanes, villages and towns to explore. I chose to stop and take a stroll around the historic market town of Petersfield, before making my way to a popular biker café for a well-deserved late lunch.

Along the way, I found some incredible roads and a steady stream of fellow riders enjoying them on a Sunday afternoon. It can be hard to escape the hustle and bustle of life in the South East, so making an early start would avoid traffic the worst of the traffic along the route, particularly through the coastal section of the ride.

However, there were plenty of times I found myself cruising through empty country lanes, marvelling at my surroundings and feeling thankful I had taken the time out to explore this beautiful part of the world.

Of course, do this ride in the middle of summer and you’ll be battling through throngs of tourists, but in the winter months Britain’s coastline takes on a unique charm that’s worth experiencing.

The journey begins at Eastbourne Pier, a quintessential English seaside spot. Despite the fact the pier has been swept away, blown up by a mine and suffered severe fire damage during its 152-year history, it still retains its grandeur.

I’d recommend taking a stroll to the end of the 300m structure, past the tacky arcades, to find a quiet spot and cast your eye over the contours of the English coastline wiggling off into the distance.

If you skipped breakfast, try the nearby Amy’s Café on Seaside Road. The avocado, poached eggs and streaky bacon on toast are delicious, and the coffee is excellent. 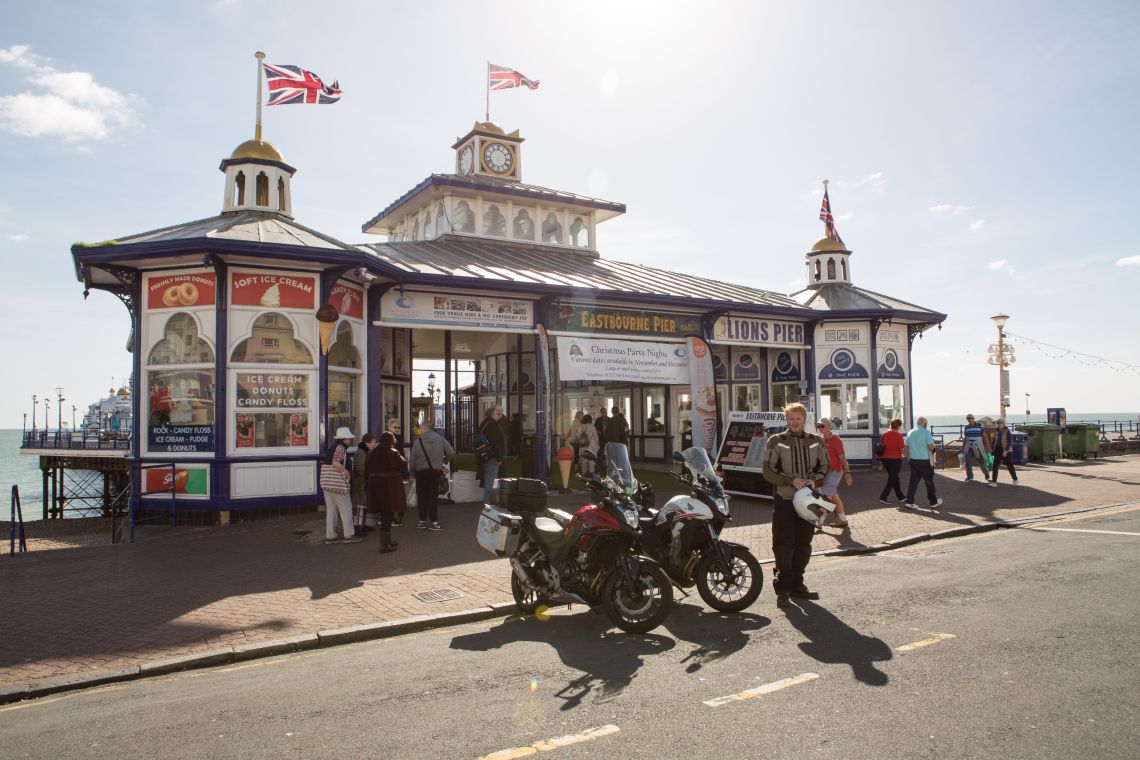 Great place to start the ride

Leaving the pier behind, you’ll ride alongside the Eastbourne promenade before climbing through some wonderfully tight turns up to Beachy Head Road. At the top, be mindful of cars drifting into your lane as drivers crane their necks to see the sweeping views of Eastbourne below.

Just around the bend is Beachy Head, the tallest chalk sea cliff in England towering at more than 500ft tall. The ride may have only just started but make sure you pull into Beachy Head car park and take a short walk to the nearby lookout point.

Breathe deep gulps of invigorating sea air and marvel at the spectacular panoramic views on offer, including a glimpse of Beachy Head lighthouse.

You’ll find yourself stood next to a war memorial that pays tribute to the 110,000 aircrew of RAF Bomber Command who fought in World War Two.

Beachy Head was a major operational route outbound from the UK for the bomber crews. Looking up, it’s easy to imagine the roar of the aircraft engines above and the trepidation the brave men must have felt as they cast a final look back at the chalk cliff s, with the very real possibility they would never see home again. 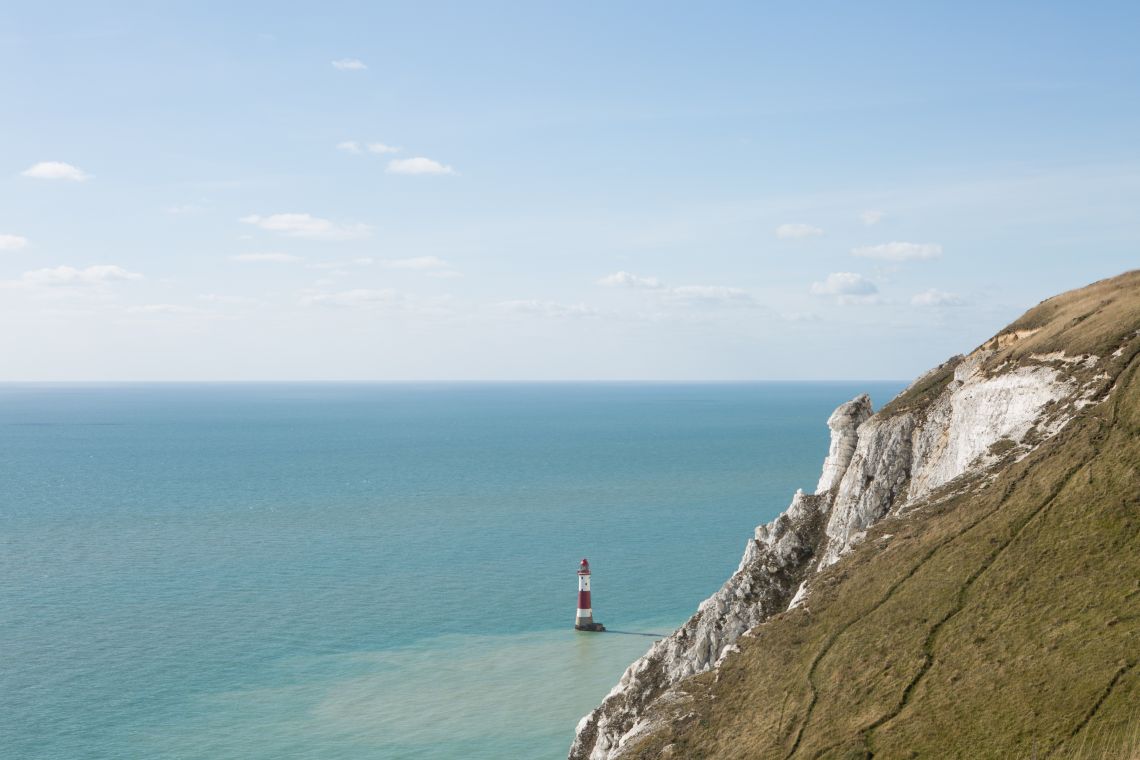 The dramatic cliffs of Beachy Head

There’s something special about cruising along Brighton seafront, catching glimpses of the sea in between vibrant crowds thronging the promenade. Brighton has a younger, edgier vibe than sedate Eastbourne, and well deserves the nickname ‘London by the sea’ thanks to its popularity as a day trip destination and a more permanent location for people moving out of the Capital.

It would be easy to spend the entire day exploring Brighton with its independent shops, cafes and bars, and iconic landmarks like the Royal Pavilion, an exotic palace built in the heart of the city. 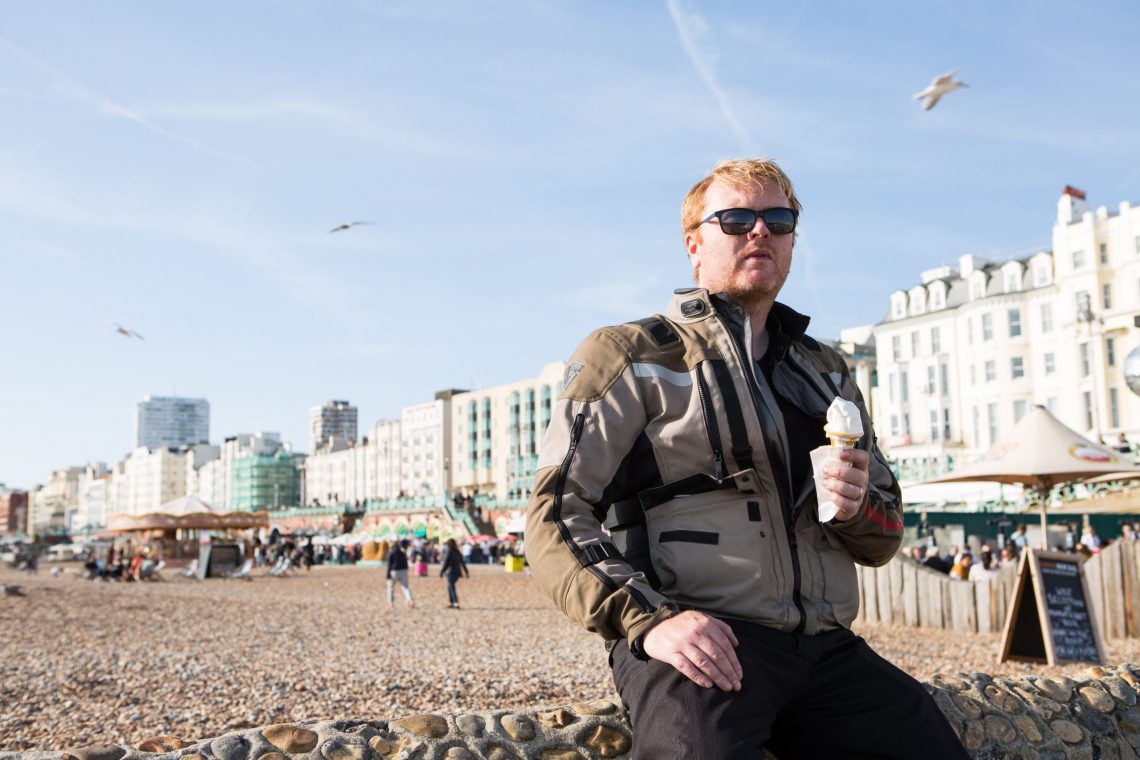 When on Brighton beach…

However, there is still a long way to ride on this route of discovery, so I’d recommend parking up in one of the motorcycle bays on the seafront to the west of the pier and finding a spot to eat an ice cream on the pebbly beach.

It’s around here you would have found the mods and rockers of the 1960s famously hurling insults and fists at each other. Today’s beach crowd is still predominantly young, but a lot more relaxed.

It’s a place to see and be seen… where fashionable clothes and hipster facial hair far outnumbering kiss-me-quick hats and deckchairs. Don’t worry about not fitting in, you ride a motorcycle, so you’re immediately cool! 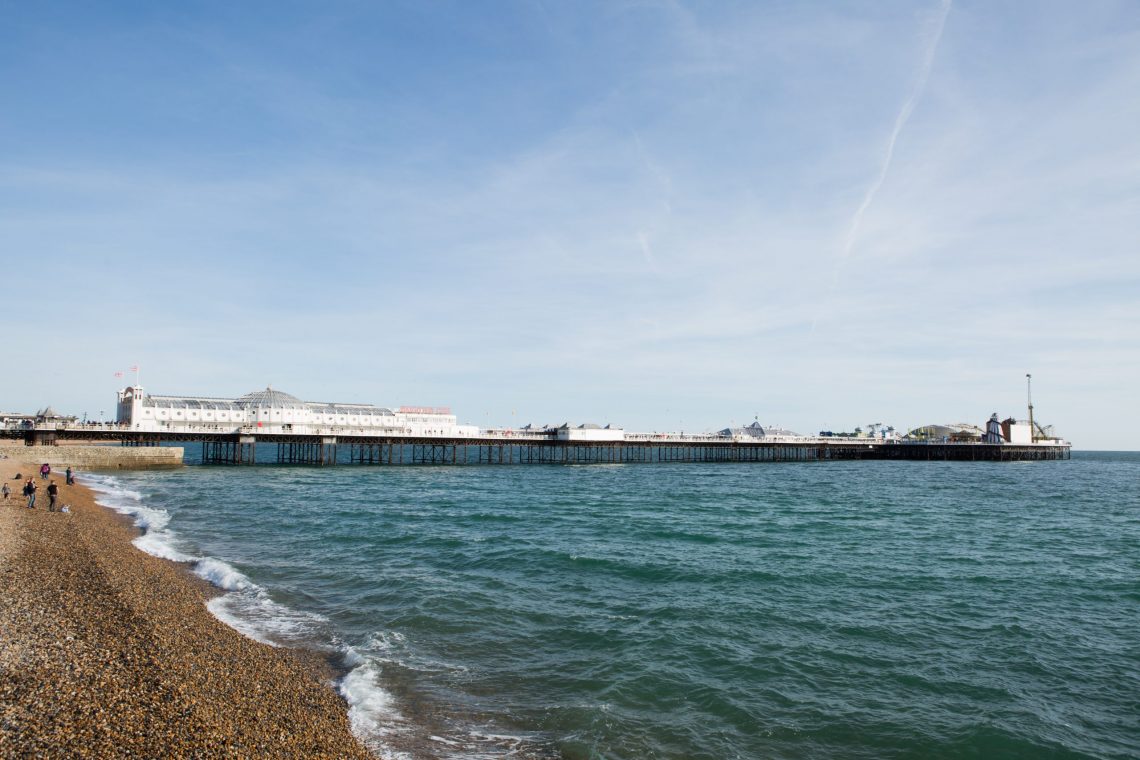 Views from the beach

Our route leaves the coast behind for good at Worthing, as you travel inland to rejoin the South Downs. Soon enough you will be met with the magical sight of Arundel Castle and cathedral. Both wouldn’t look out of place in a Disney or Harry Potter film, perched atop a hill above the cosy little town.

The oldest part of the castle dates back over 1,000 years, although it was almost completely rebuilt between the 1870s and 1890s. If you don’t fancy paying the £13 to £22 ticket price to look inside the castle, then I’d suggest doing a little window shopping at some of the marvellously eccentric shops dotted throughout the town.

My favourite was Kim’s Bookshop which attempted to attract passing trade by placing fascinating tomes such as ‘Birds of the Czech Republic’ and ‘Chinese Bamboo Carving’ in its window.

Boasting equally stunning architecture, Arundel Cathedral is almost as impressive as the nearby castle and is worth taking a few peaceful minutes to look inside. The route passes by it on the way out of town. 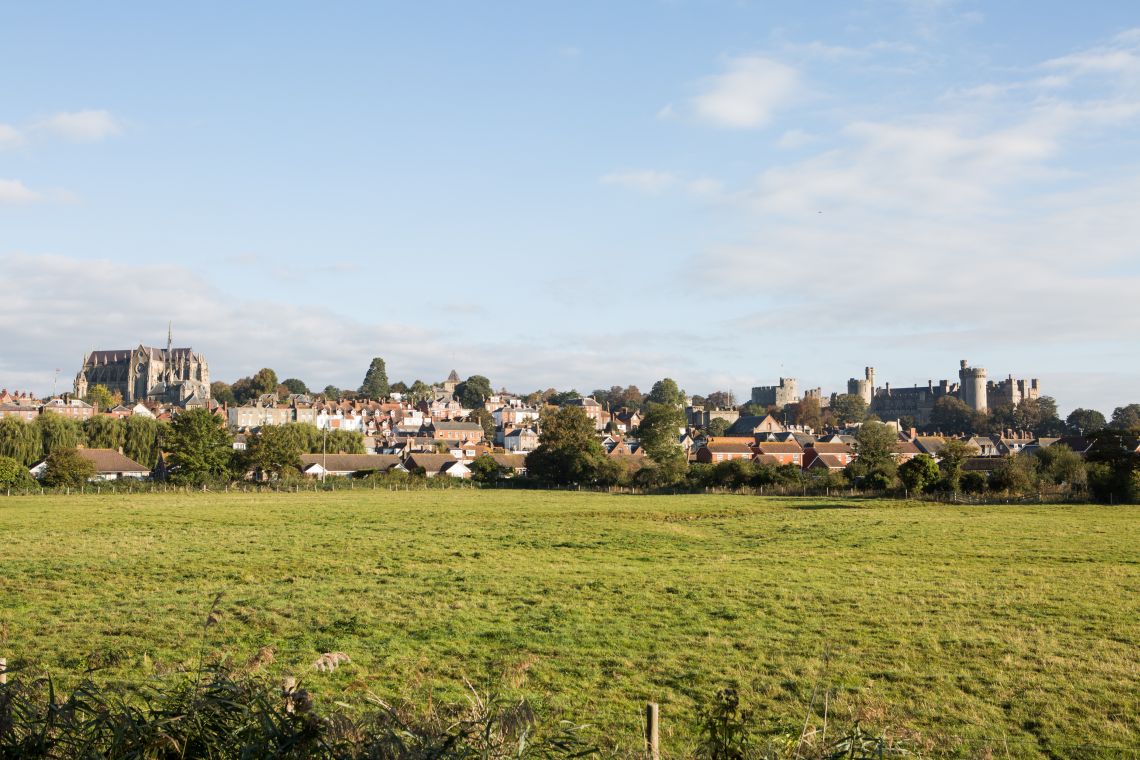 The wonderful town of Arundel

The ride from Arundel at the southern edge of the South Downs, through the villages of Petworth and Northchapel to the north, showcases why this is such a special part of the world.

As you follow the A283, you can drink in intoxicating views of rolling hills stretching to the horizon, ride through gloriously sun-dappled tree tunnels, and pass by beautiful villages that make you proud to live in this green and pleasant land. 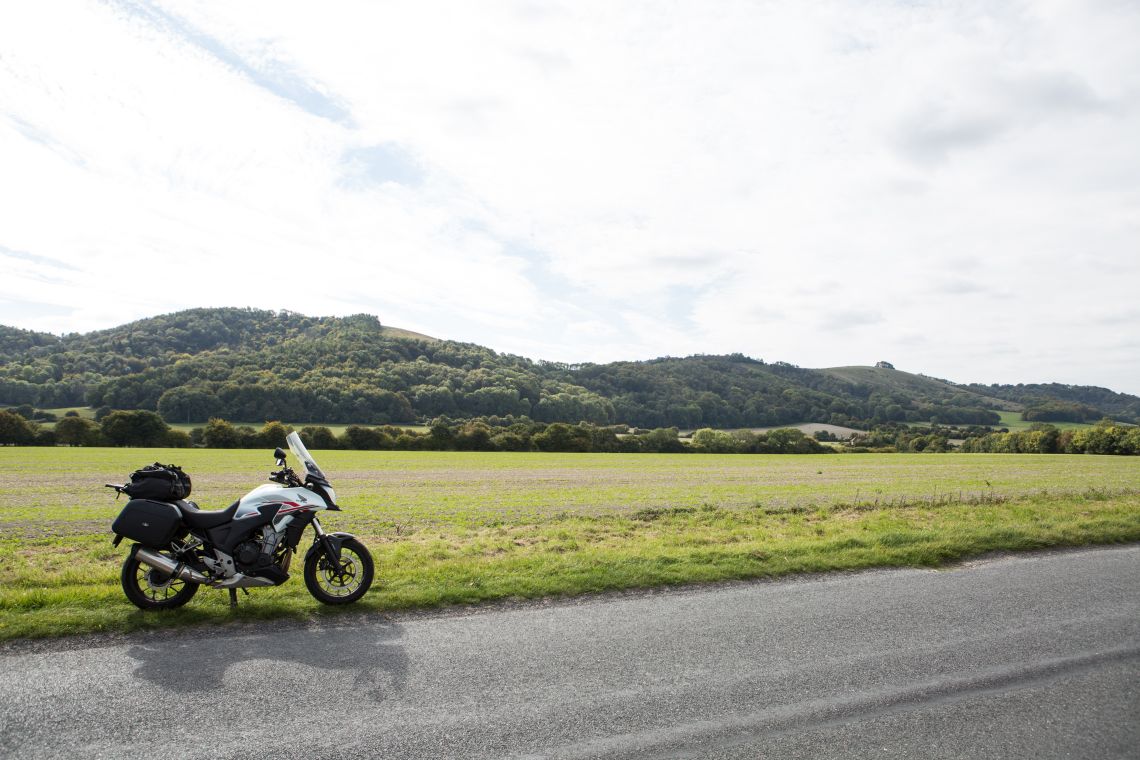 The road takes you north towards the intriguingly named Devil’s Punch Bowl, which sits just outside the South Downs National Park. Legend has it that the Devil himself created this natural amphitheatre by scooping out great mounds of earth to hurl at the Norse God, Thor.

These days it is a haven for walkers, runners and nature lovers keen to enjoy the spectacular scenery. It’s the perfect spot to park up and stretch your legs by following one of the walking routes signposted throughout the area.

There are also some green lanes nearby if you fancy some off-road action on two wheels. If like me you’re feeling less energetic at this stage of the ride, take a seat at the National Trust café onsite and enjoy a coffee and a piece of cake. I highly recommend the chocolate and cherry brownies. 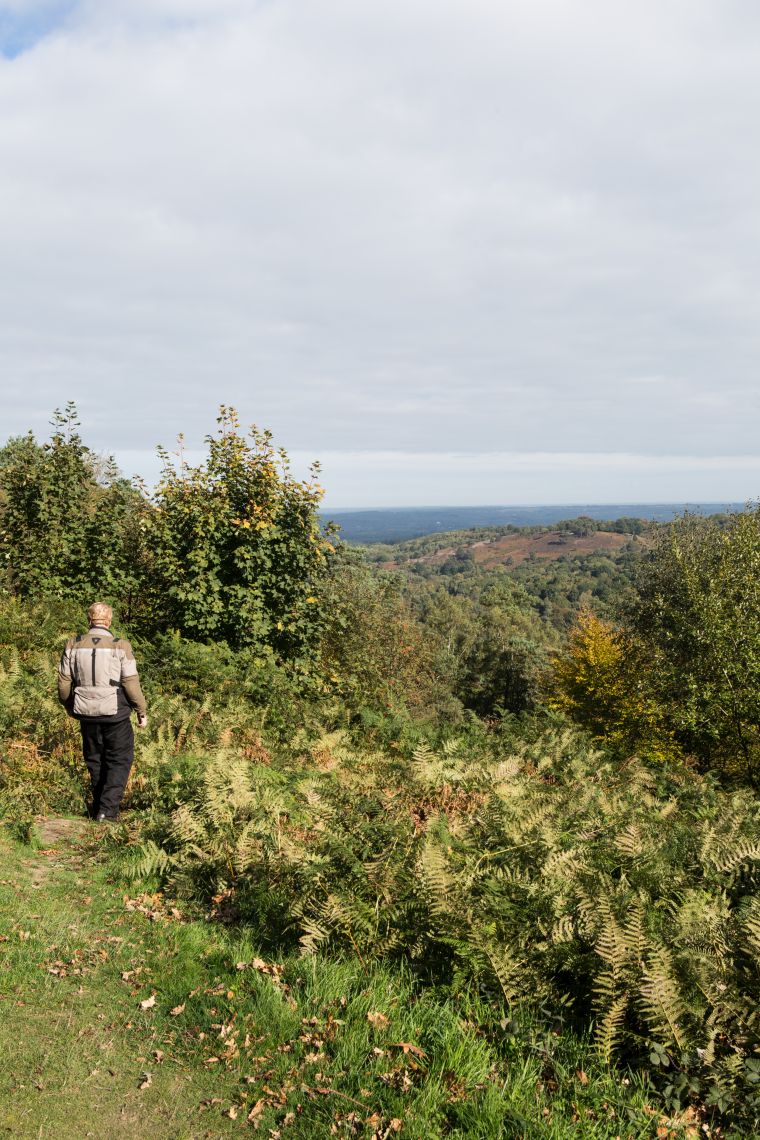 The Devil created this landscape apparently

Almost at the centre of the South Downs is the sleepy market town of Petersfield which dates back to the 12th century. At its heart is a market square where you can park your bike outside the Post Office and relax in one of the pubs or cafes dotted around the edge.

If you fancy swapping two wheels for two oars, half a mile walk away is Petersfield Heath and Pond where you can rent a rowing boat and enjoy splashing around on the water. 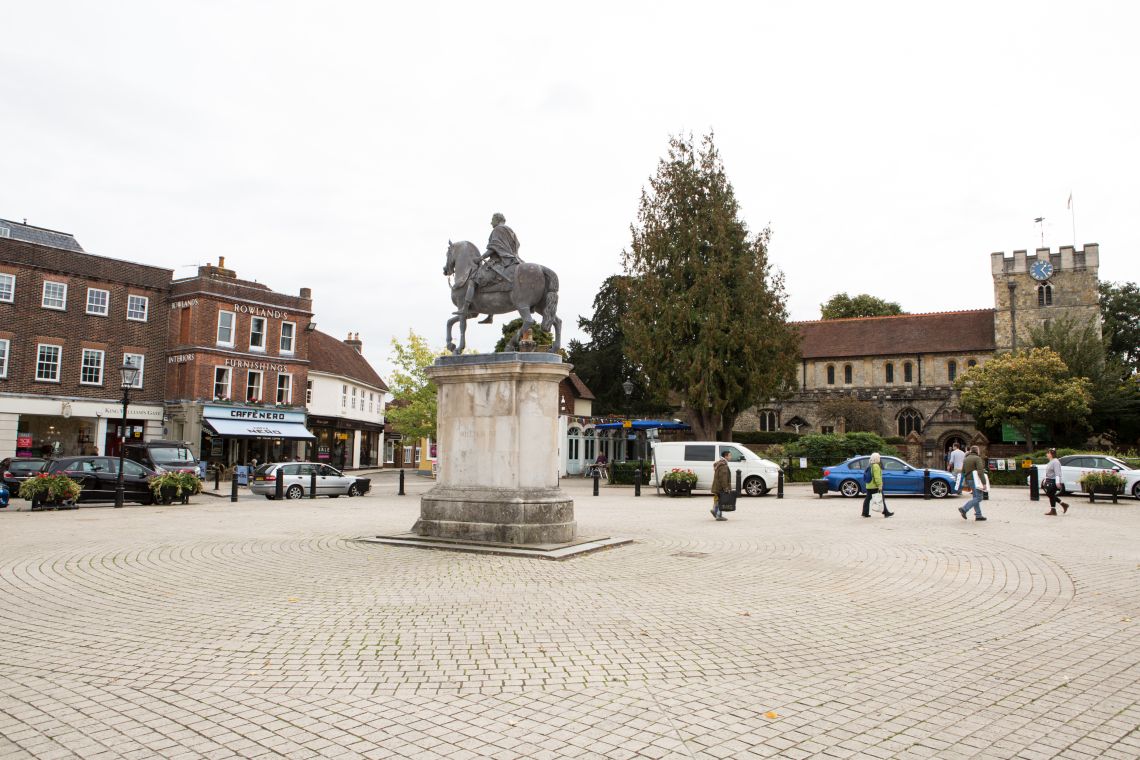 You can tell you are nearing Loomies Moto Café by the gradual increase in motorbikes on the road. The restaurant has been a popular biker haunt for more than a decade. 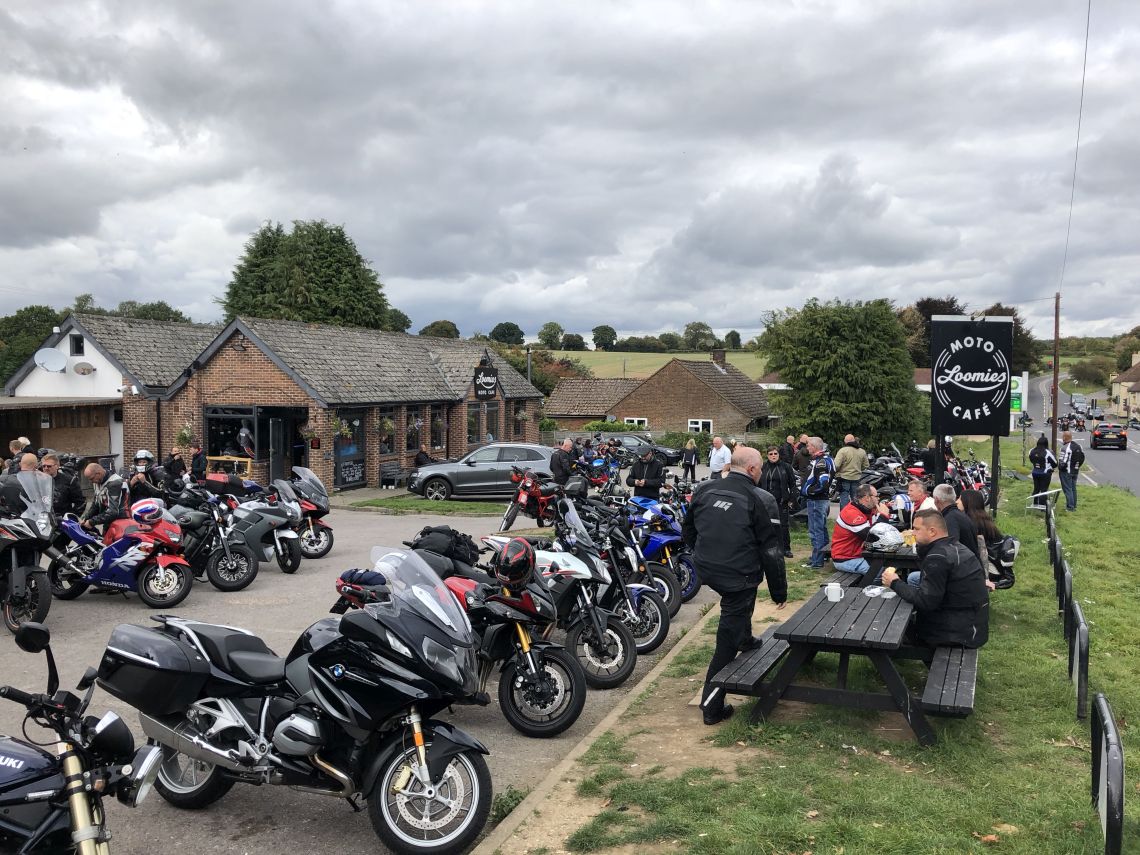 Where bikers flock, Good grub there must be

It’s surrounded by fantastic motorcycling roads that offer some of the best riding in the South Downs. The car park is often full of motorcycles of all styles and it’s the perfect place to talk bikes with friendly, like-minded folk amid the shrill of high-revving sports bikes and the guttural throb of Harley Davidson V-twins.

Chances are you’ve worked up a hunger by now and Loomies is the perfect place to vanquish it. The café serves up excellent hamburgers and gut-busting breakfasts.

If your waistband can take it, I’d suggest the Loomies Burger, made from prime Aberdeen Angus beef and served with house special Loomies chutney. It took me a while to get back on the bike afterwards but it was worth it. 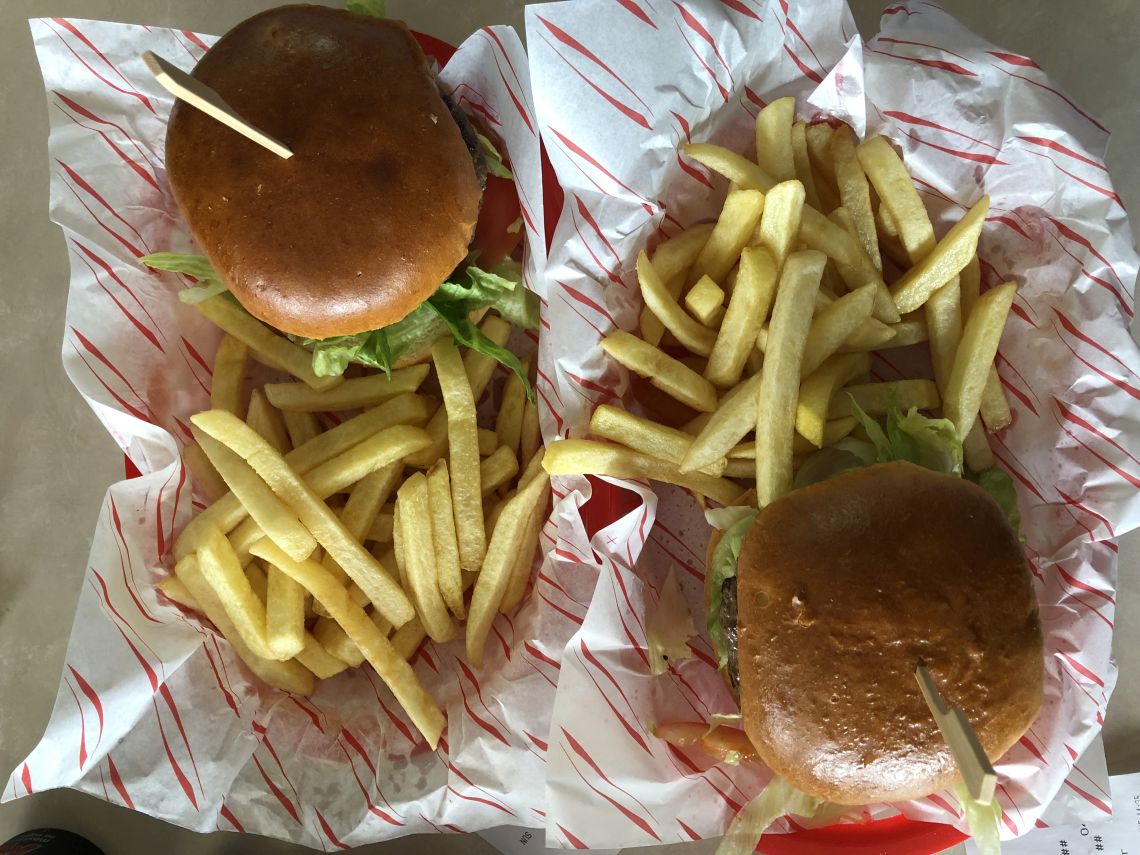 The final few miles of the journey takes you along more glorious country lanes. While there are plenty of places to get your knee down and top up adrenalin levels, I found myself subconsciously easing off the throttle and enjoying cruising through the countryside, stopping every so often to soak up the views. 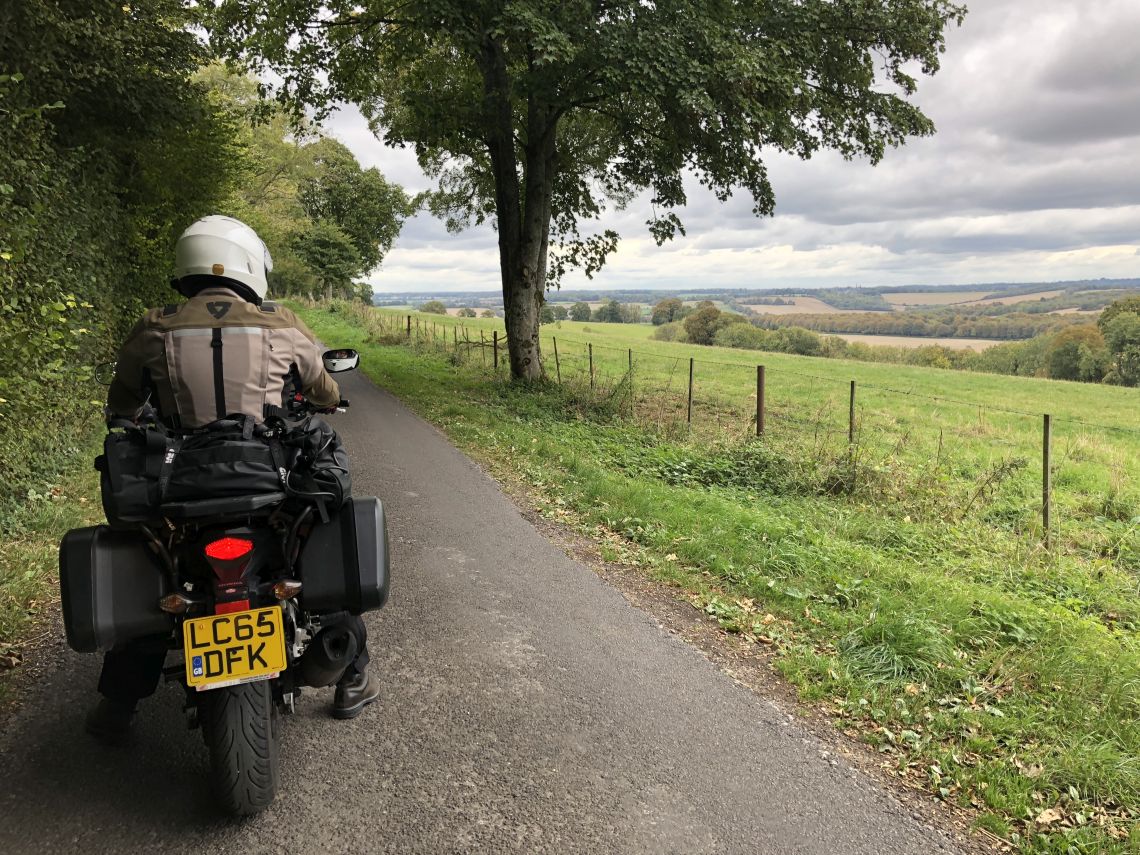 If you have a SatNav with a winding roads setting (like the TomTom Rider 550), it will take you along a series of single-track lanes that skirt the edges of fields and pass by farmyards. While none of the route is off-road, I did enjoy the feeling of venturing off the beaten track.

All too soon, the countryside gives way to an urban landscape and you find yourself navigating through Winchester. It isn’t a particularly large city, but what it lacks in size, it makes up for in history – once being the ancient capital of England.

The finishing point of this Discovery Route is Winchester Cathedral, the most famous local landmark. The cathedral is one of the largest in Europe and its location has been used as a place of worship since the seventh century.

It is also the last resting place of English novelist Jane Austen, her grave becoming a pilgrimage for literature lovers throughout the world. The grounds of the cathedral are the perfect spot to sit back and soak up this architectural masterpiece while reﬂecting on a thoroughly enjoyable ride through the South Downs. 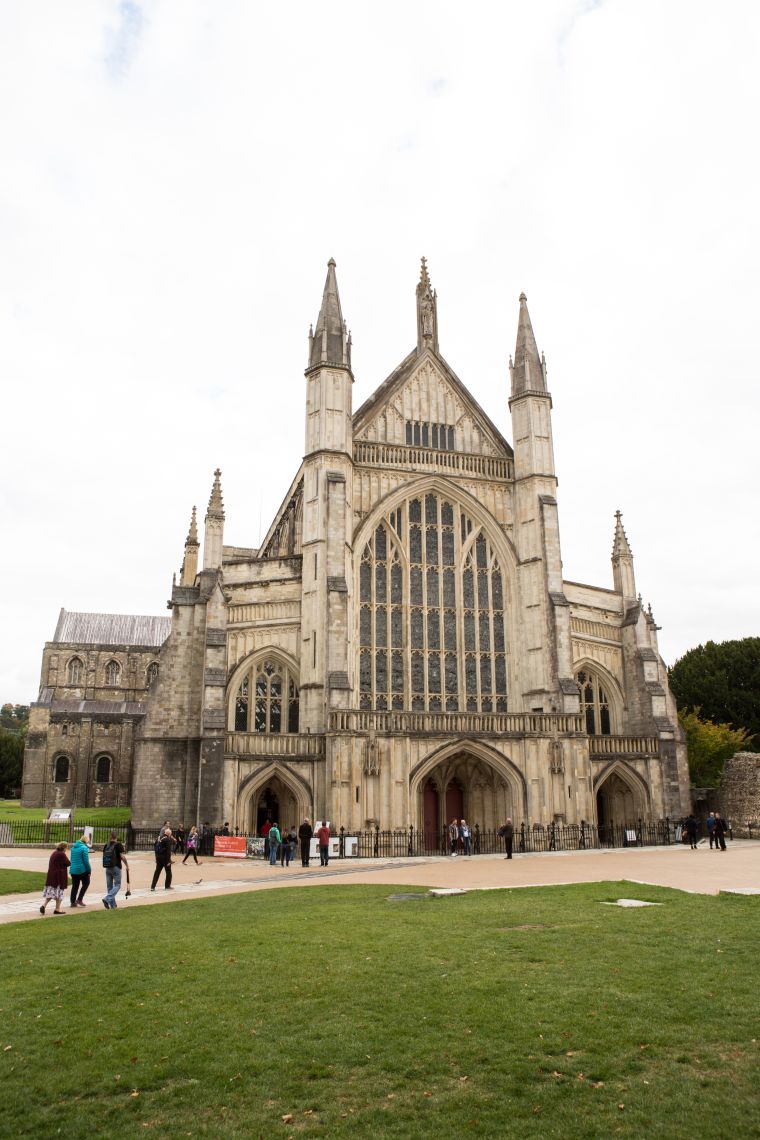