Book Review: There & Back Again To See How Far It Is 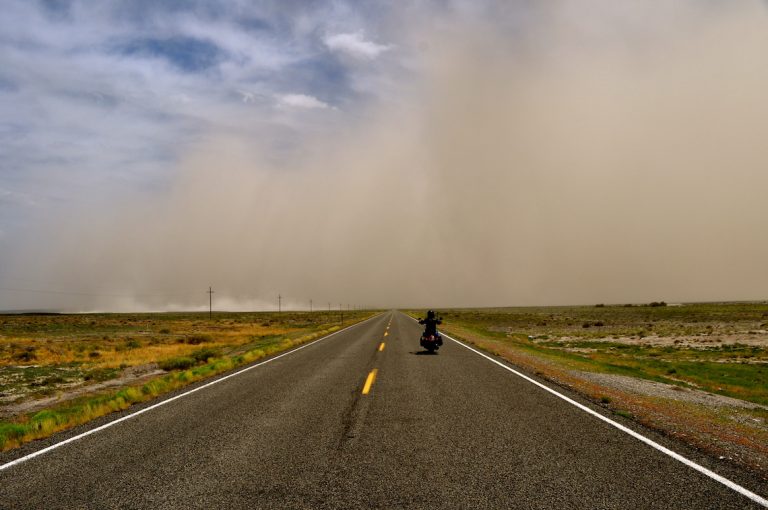 THERE AND BACK AGAIN TO SEE HOW FAR IT IS

After 28 years’ hard corporate slog and a lifetime of armchair travelling, ex-pat and novice biker Tim Watson left the automotive industry to ride some 8,000 miles around the USA on a Harley. We join him as he battles with a dust storm in Utah…

It was time to saddle up once more and see what was really around the next corner. To be fair, there was a lot of rock debris in the road, as we’d been warned, and there was some road construction going on, but there were no workers about as they had clearly paid attention to the TV’s bad weather reports. The sky over the gas station had been completely black, and now I could no longer see the mountains behind as they were lost in clouds of heavy rain. What little blue sky was left was immediately ahead of me on Highway 6, in the direction we needed to go.

We hadn’t seen anyone for nearly half an hour when we hit the infamous 26-mile mark on the road, but I was somewhat disappointed. Yes, there was a sharp right-hand bend with an adverse camber; there may even have been grooves in the tarmac surface where motorcycle footpegs had dug in before spinning wildly out of control and smashing their riders against the massive yellow rock outcrops that butted on to the road. But it was no more dramatic than some of the bends I had experienced in the past two weeks and I began to hope that maybe we would be able to make it into Utah without any real problem.

Highway 6 dropped us down from the Confusion Mountain Range on to a flat low plain. In the distance, perhaps 10 miles ahead, I could just make out what I thought was mist or fog, although it appeared to be moving very quickly, covering most of the horizon and coming straight towards me. The sky began rapidly getting darker and I thought the rain had finally caught up with us, but it was also getting hotter and there was a strong wind whipping up the roadside vegetation. Suddenly we went from daylight to murky twilight, as if we had been enveloped in fog.

I couldn’t see more than 10 feet ahead of me with the bike’s headlight on full beam so I slowed down to a miserable 25mph, with the bike rocking from side to side. As my eyes became accustomed to the gloom I realised we were right on the edge of a dust storm. Something amazing had happened to the weather – two warm fronts perhaps meeting a cold front – but now all of western Utah was being covered in a fine sandy dust as the strong storm blew through. And I was riding right through it on the loneliest road in the world.

It felt like being in the middle of a giant vacuum cleaner, and soon both the bike and I were covered in layers and layers of gritty dust. I couldn’t see out of my helmet’s visor properly and I was breathing in lungful after lungful of air that tasted like mud.

‘“Can you actually see anything?” Anne asked me over the intercom. She was riding behind me, following my tail lights.

“A little bit. Maybe a few feet ahead but not much, and it’s getting worse,” I replied, trying to sound confident but secretly hating every second.

Every 10 minutes or so the swirling winds would stop briefly and we’d have glimpses of what looked like a lunar landscape. Everything – trees, bushes, rocks, fences, gates – was covered in brownish-white sand. Then the curtain would drop again and we were back to riding through swirling brown fog unable to see anything and constantly trying to work out which way the road was going.

We still had more than 40 miles to go until we hit the first town in Utah. The light was really making things look most odd. Sometimes the sun would come streaming through and I could make out the edges of the road a little better, and then it was as if someone had switched the vacuum cleaner back on and the dust and sand would whirl around again in weird shapes and patterns. We passed a sign hung on a farm gate that announced this was Bob’s Taxidermy and Coffee Shop. Who on earth would ever come out here on this road to get something stuffed and then have a cup of coffee with Bob? Actually, the way I was feeling about riding at that moment, I would have welcomed Bob with open arms no matter what he tried to do to me. Heck, I would even have drunk his coffee.

Then unbelievably, from out of nowhere, a human figure appeared, standing in the middle of the road holding up a large STOP sign. A road construction crew was actually out mending the road, and the man didn’t even look too concerned about the crazy weather as he waved at us to slow down and stop. That gave me a chance to sit back for a few minutes and gather my thoughts. It was clear we had to press on, but my entire body was aching from the stress of this ride, my head was pounding from the concentration, and I really wanted a drink of water.

After a few minutes a small convoy of traffic led by a construction work pilot vehicle came into sight, passed us and disappeared into the twilight-like gloom. Anne and I were alone again. The man with the STOP sign waved us on and we spent the next five miles following the pilot vehicle while trying to keep our bikes off the mounds of gravel and in the tyre tracks of the vehicles that had gone before.

I tried to make myself more comfortable in the saddle and move my body around a bit, but I was suddenly struck with absolutely abject terror because I couldn’t move my left leg at all. It felt like an enormous weight was pulling it down. It was exactly the same sort of fear I’d experienced as a kid when a local farmer told me not to eat the grain seeds that he had been planting in the field behind our house as they were covered in highly toxic pesticide. I remember the sensation of chewing the seeds very slowly as he told me this. My eyes must have been huge circles. And when he had finished telling me about all the different types of death I might experience if I ever ate any of his seeds again I promptly threw up in a hedge.

My initial self-diagnosis was that I had suffered a stroke all down my left side, from the waist down. Granted my medical knowledge was sparse, at best. I am the man that walked around for an entire day, drove his car and took the dog for a walk, after misjudging a step on a ladder and falling downstairs that morning, fracturing my ankle in three places.

The dust clouds were getting thicker, however, and I knew this was neither the time nor the place to stop, no matter what ailment I had been struck down with. I consoled myself with the thought that even though I might have had a stroke I had not yet passed out, wet myself or started dribbling. I started to talk to myself, to see if my speech was slurred, but I couldn’t hear anything over the whistling wind of the sand storm and the noise of the motorcycle engine. Maybe this was just a minor stroke? I didn’t want to alarm Anne by telling her over our intercom system that her husband might be dying; I felt she had more than enough to contend with already.

No matter what I tried to do over the next 20 minutes I could not lift my left foot. It felt like someone had tied a lump of lead to it. My mind was racing. All this riding and concentration must have caused a blood vessel to burst in my brain. Would I ever be able to walk again? How the hell would we get the bikes back home? I could just make out the distant shape of houses and an abandoned gas station, its broken doors flapping in the wind, and I seized the opportunity to get off the road and come to a stop beside the rusting petrol pumps and find out what the heck was going on with my leg.

With a huge effort I managed to yank my boot off the bike’s footpeg. There appeared to be something like a large lump of black chewing gum stuck to the sole. I had managed to stand in molten tarmac from the road construction work we had passed and that, coupled with the heat coming off my motorcycle’s engine, had effectively welded my left foot to the bike.

The relief was intense. To Anne’s astonishment, and the occupants of a couple of passing cars, I performed a Michael Jackson-style Moon Walk dance, to drag the sticky tar off the bottom of my boot.

Originally from Tunbridge Wells, Kent, Tim Watson began his career as a local newspaper journalist before moving into the automotive industry. For 28 years he held senior executive positions with Ferrari, Aston Martin and Jaguar before swapping out his desk for a motorcycle that scares the hell out of him every time he gets on it.

Tim headed out for a six-month tour of America’s back waters with his wife Anne to see what really is out there beyond the bright lights and big cities and then wrote his first book about it. A second motorcycle travel book is in the pipeline. Tim lives in LA, California.

Officially it’s a 2010 Harley Davidson Dyna Street Bob. Unofficially it is the transport of the devil. It weighs a ton, is not very fast or technologically sophisticated. Its saddle is no more than a wafer-thin piece of plastic. It has 16-inch ape handlebars and a 32-inch sissy bar that look stupid but make me laugh and it and has a stage-one engine upgrade and a Samson exhaust system. None of this I understand. It scares the hell out of me every single time I get on it. Yet I have ridden it for more than 15,000 miles around North America and I love it it and will never ever sell it. 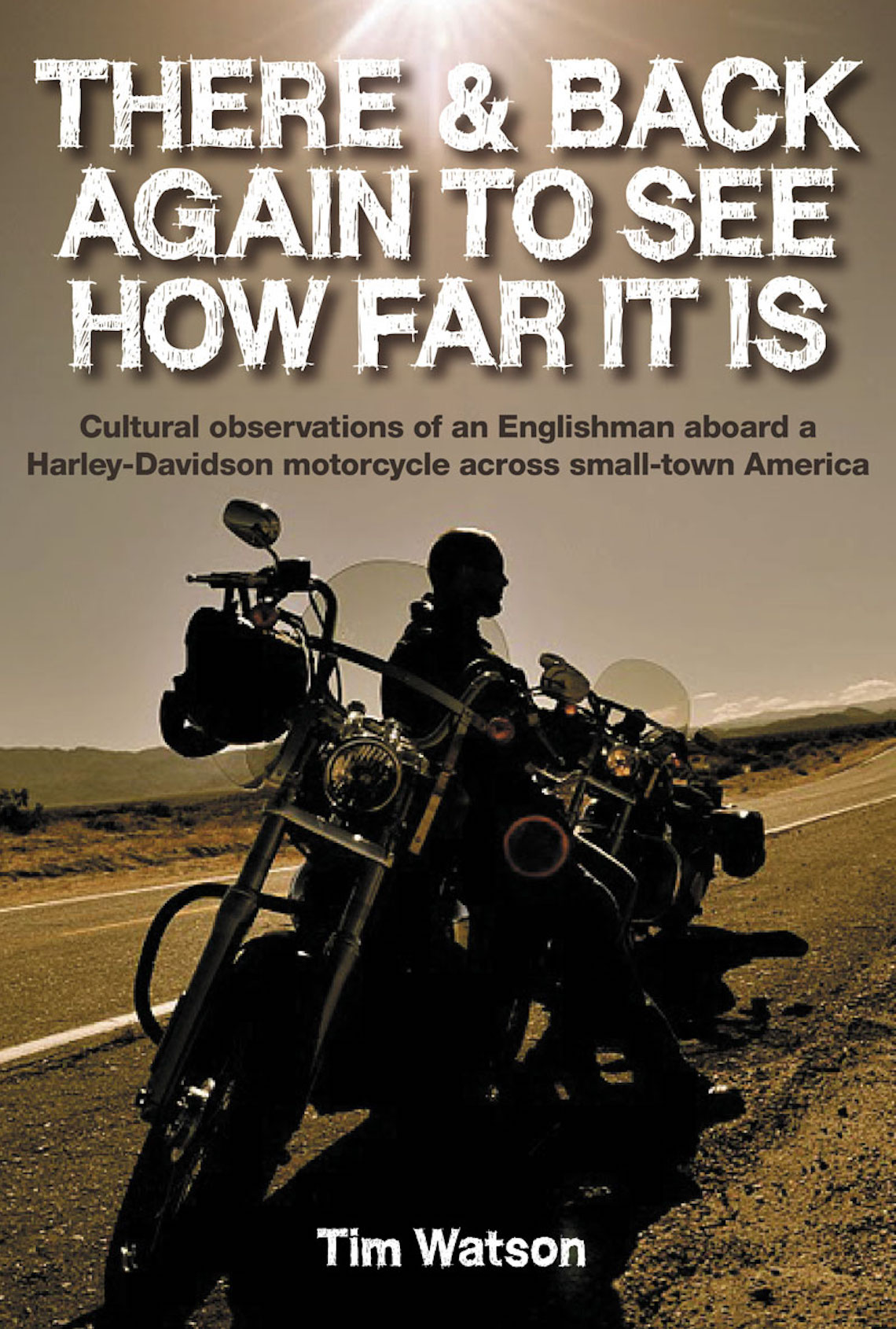