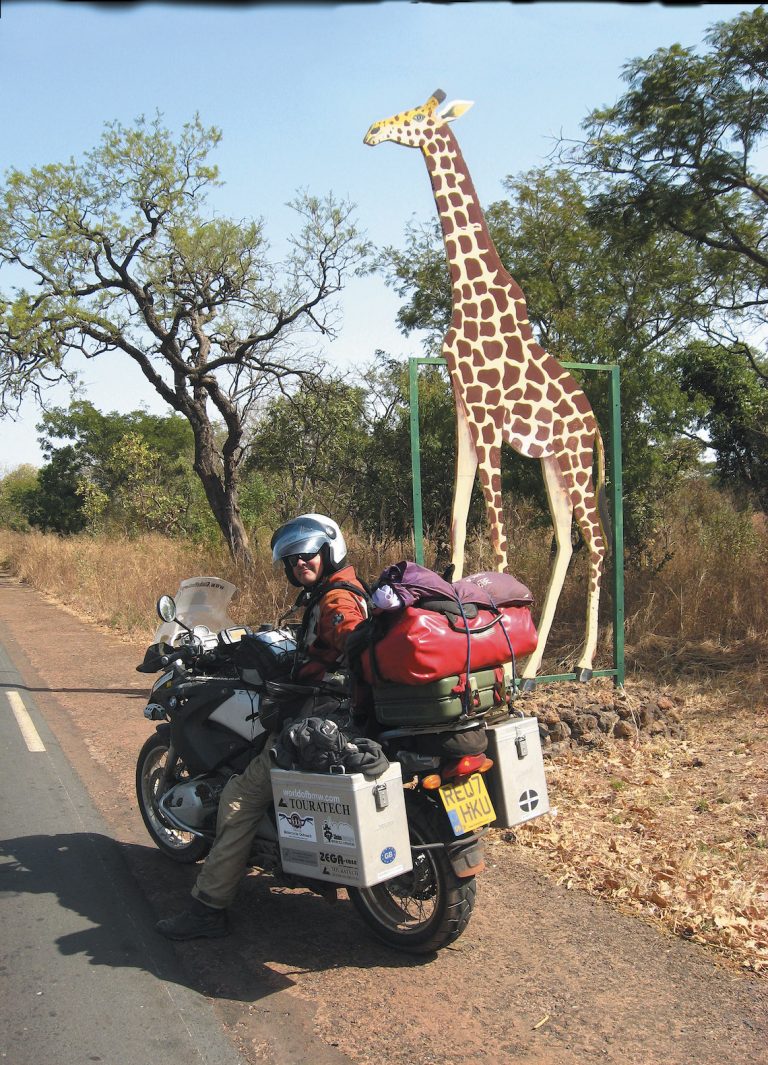 In the latest of his adventure motorcycle series, author and rider Robert Wicks brings together a collection of classic overland routes, spanning all seven continents. In this extract we join contributor and seasoned ABR Craig Carey-Clinch as he rides to Guinea-Bissau, West Africa…

In 2005 I had what would be for many people the adventure of a lifetime when I rode from London to the Gambia in West Africa with friends. We crossed the Sahara Desert, experiencing the wonders and beauty of Africa as well as riding some of the best routes on offer anywhere. Three years later we headed back to West Africa to research a GlobeBusters’ expedition. This time we planned to push further southwards, to unknown Guinea-Bissau.

Our first destination was the beautiful and ancient Berber stronghold of Chefchaouen, Morocco, where among the high peaks we later enjoyed the wonderfully spiritual atmosphere of the narrow winding lanes and colours of the medina. The following day, the road took us first to the Roman ruins at Volubilis, vast, awe-inspiring and one of the most extensive of Roman remains that can be found. After an evening in the market town of Azrou we headed into the heart of the awesome High Atlas Mountains, climbing steeply winding roads and switchbacks, past vast reservoirs and ever higher until the snow-covered peaks gleamed ahead of us. Our goal was the waterfalls at the Cascades D’Ouzoud, a beautiful sight in the warm afternoon sun. 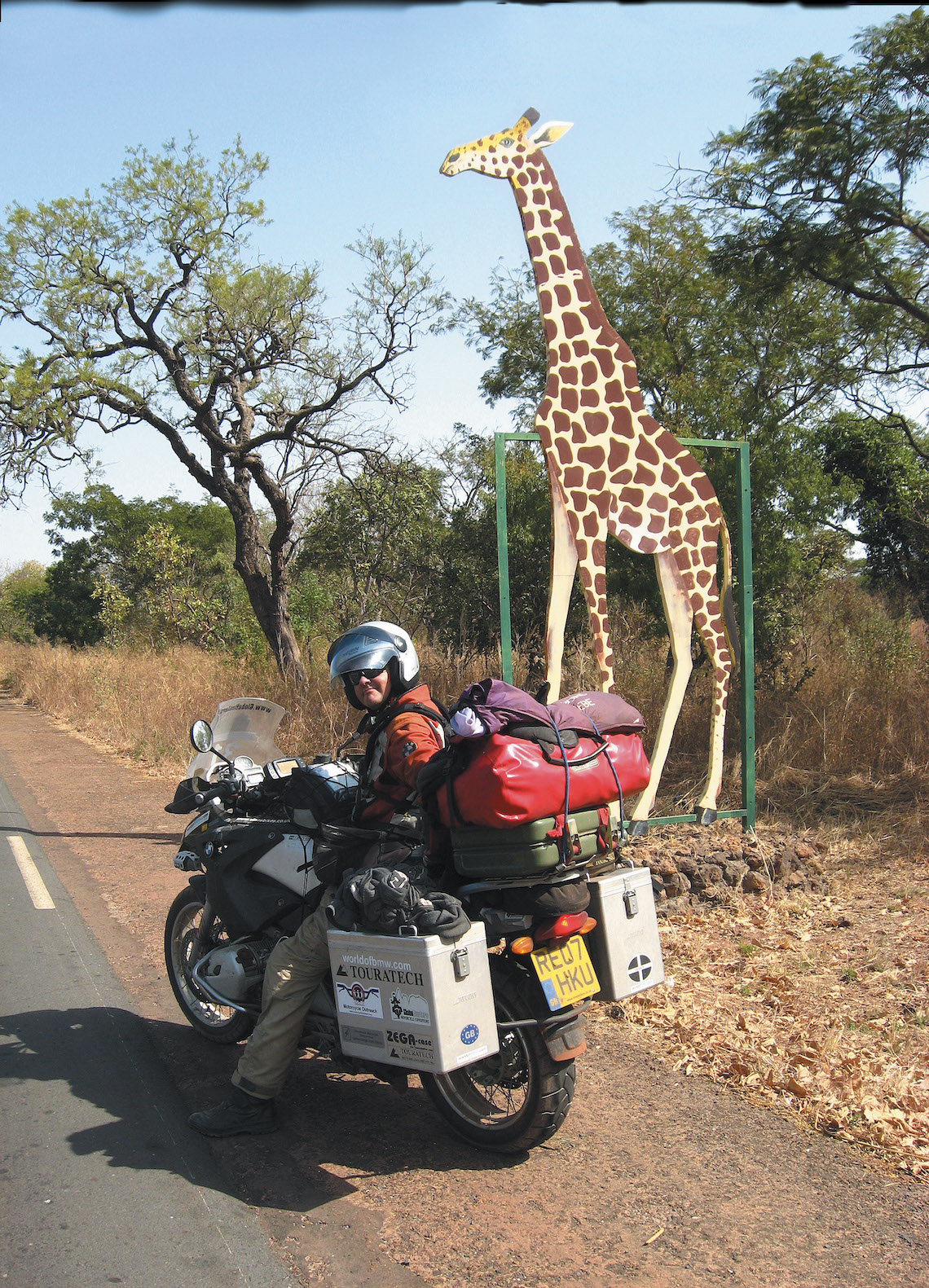 After a coastal break in the old Portuguese port of Essaouira, we headed south via twisting coastal roads and into the towering peaks of the Anti-Atlas. The road wound around towering peaks and past ancient Kasbahs until we reached the town of Tafraoute. Entering the Sahara was the next big landmark. We re-joined the main road south and after a short section of hills, the desert vista opened out before us as the road headed out into the rocky and hilly ‘Hamada’. After 100 miles of following huge inland folds in the country, we stopped in Tan Tan for the night before continuing south, sea on one side, desert on the other.

We crossed into Western Sahara, a disputed territory watched over by the UN, and scene of massive investment from a Moroccan government keen to consolidate its hold on the country. Dakhla felt like the last place on earth, a lonely and remote town at the end of a long strip of dune-filled land which reaches out into the ocean, offering dramatic vistas as the final miles are ridden. But good food is on offer and a quiet beer can be enjoyed at the Regency Sahara hotel. It was another early start for our final day in Western Sahara, a planned dash for the border with Mauritania. A poor set of tracks led us in all directions through the minefield that sits on the border of the two countries. Finding the right path is not easy; stray- ing too far off can have the worst kind of consequences.

The loneliest section of the desert has to be the 320-mile ride between Nouadhibou and Nouakchott. The first 150 miles are blank, flat and empty, but after this the dune sea encroaches as the sand of the Azeffal and Akchar makes its presence felt in rolling clean yellow vistas. The road fires arrow-straight through most of this European-quality highway, tempting the rider to nail the throttle hard back. But to do so means missing the sheer majesty of the open desert. From Nouakchott we headed south, through the western edges of the Trarza dunes, which on this southern edge of the Sahara are covered in low forests of spiny acacia. Nearing the River Senegal and the border of Mauritania the land came to life, with tall plants and numerous trees appearing in all directions.

The entire feel of the ride changed upon entering Senegal, as conservative Arabic transformed into exuberant black African. There were busy street markets in every village we passed through, the people dressed in vibrant colours discoursing with each other in animated fashion. Our journey took us along the Senegal River route, around the north of the country. This long and variable road is some way off the beaten track for tourists and runs through a country that changes by the hour – from river plains and sugar plantations to undulating low hills covered in acacia trees. Ouro Sogui was our destination, an impoverished transit town at a large crossroads that can take the traveller either south to the Mali border or west into the blazing cauldron of the Ferlou Plains. 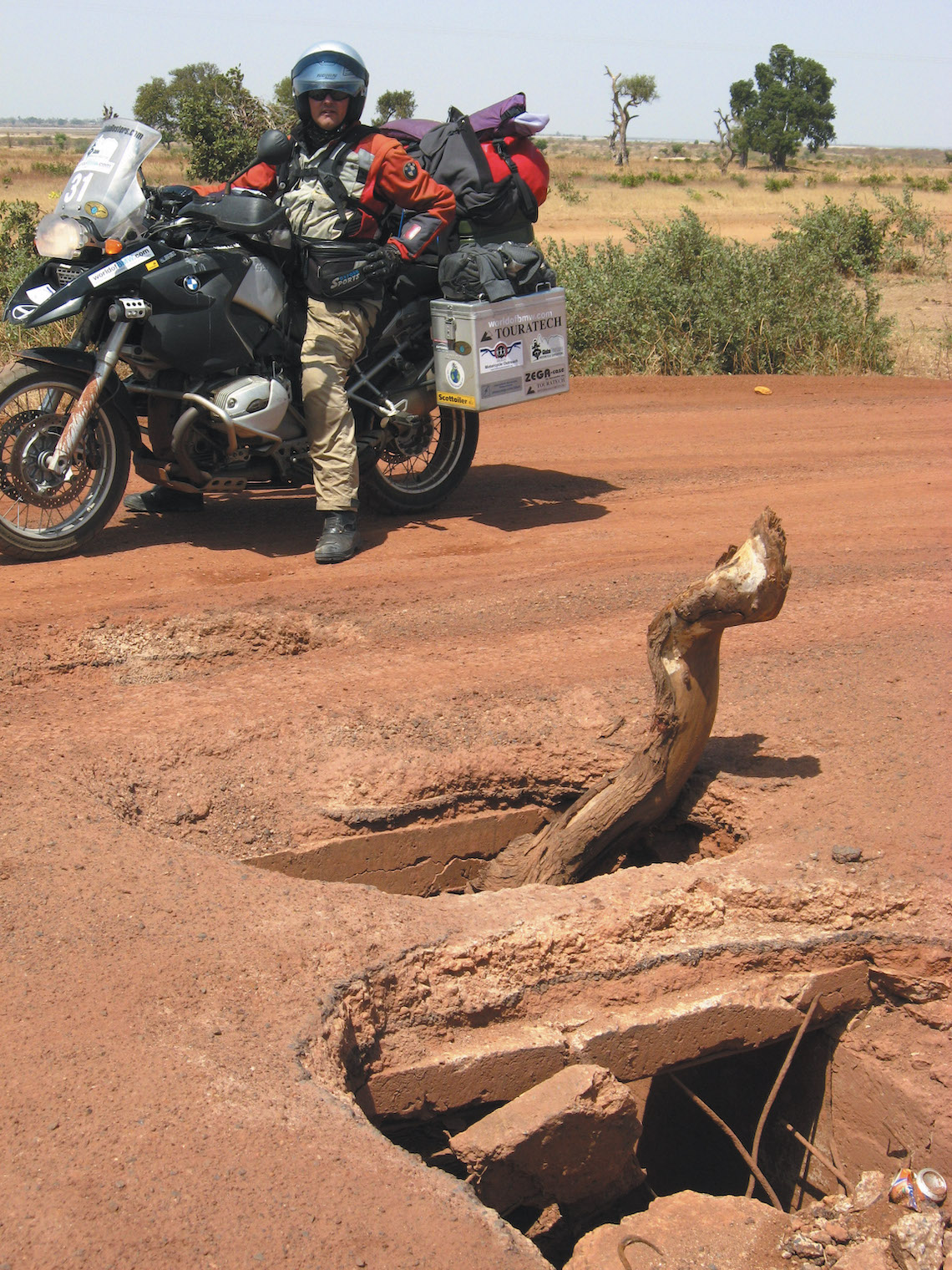 An early start the following day and our wheels took us south along a worsening road. But this was to be a pleasant ride as the ground rose into a range of low rounded hills, covered by trees and brown grass. The sentinel figures of huge baobabs dotted themselves across the landscape. The road curved smoothly around hills and past mud hut villages, where children ran out towards us, waving and shouting.

Leaving Senegal and entering Mali was a relaxed process, but Kayes was chaos. Parked convoys of trucks, checkpoints, roads thronged with people, badly driven wrecks of cars. We noted the rundown colonial buildings and street traders sharing space with newer commerce and cashpoint machines. Despite its impoverishment, the town has plenty to attract the traveller. The markets are great, with a large variety of goods. Nearby are the Chutes de Felou waterfalls and the

old French fort at Medine. Returning to Senegal, the ride took us through rolling hills and out into the central Senegal plain, with its extensive forests and exotic wildlife. We arrived in Tambacounda as the afternoon heat once again set in. This battered-looking town is a major regional centre and transport hub, with several fuel stations, banks and other businesses.

Nothing had prepared us for the 100 miles of deep potholes, ruts, shattered tarmac, car-sized trenches, broken lorries and heavy congestion that we were to face the following day on the road to Kaolack. This was a motorcycling challenge par excellence as we wove about, mixing with other traffic, chewing diesel fumes and acknowledging the friendly shouts from drivers of broken-down trucks. 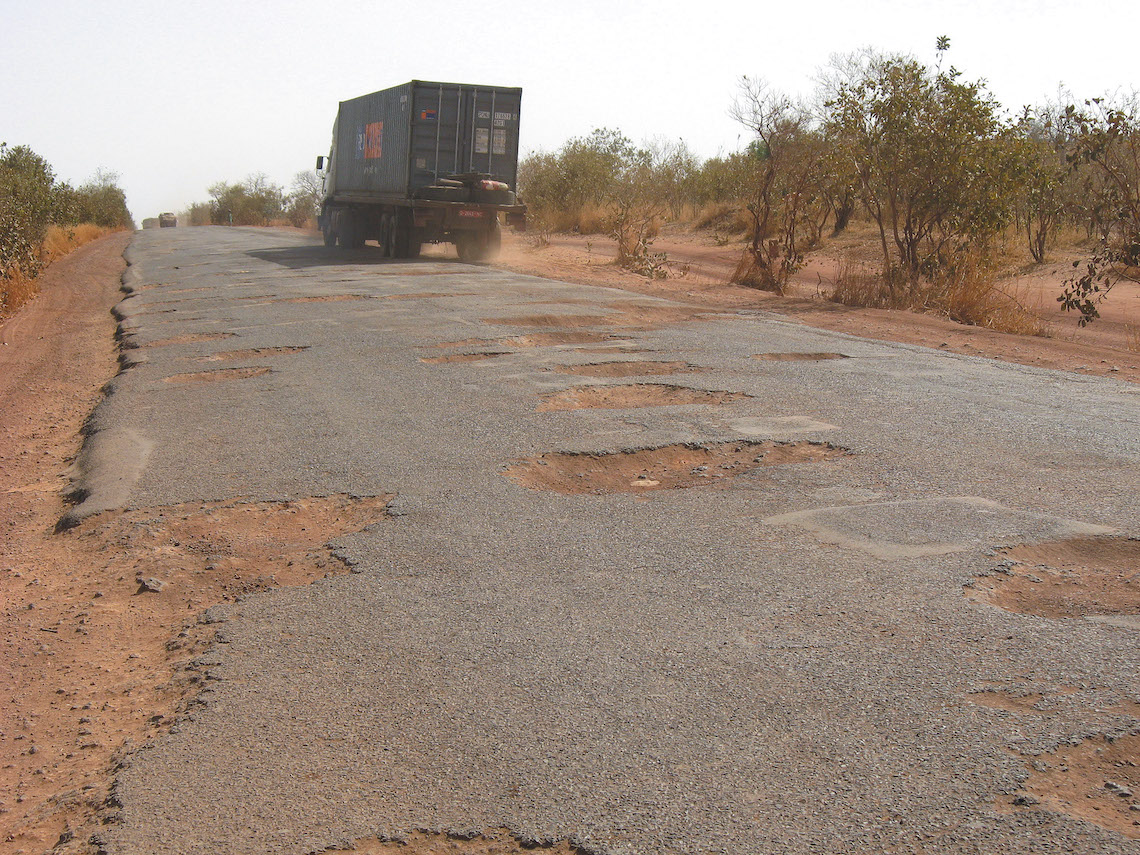 Our next destination was Banjul in the Gambia. The ride took in a part of central Senegal that ran near the coastal marshes and swamps. Packed with exotic birds and small traditional villages, the sometimes rough road to the border turned out to be one of the nicest rides in Senegal. Banjul lies at the south side of the mouth of the Gambia River and is reached via one of the poorly maintained ferries that ply the water. Too many vehicles were crammed aboard, people occupying every inch of space, as the overloaded ferry inched its way across the river, propelled by knocking and belching diesels.

And so to Bissau. Leaving the Gambia and entering Senegal once more we rode south into the tropical Casamance region. The reputation of the area, due to sporadic ‘separatist’ action, puts many people off visiting a place of remarkable beauty. Vast jungle-like forests line the roads, which wind their way through extensive greenery and across picturesque rivers. Passing through Ziguinchor, with its easy relaxed atmosphere and numerous colonial buildings, we took a quiet road to the border, where there was little comment from officials as we passed through. Guinea-Bissau is still reeling from the disastrous civil war of 1998 to 1999, plus three bloody coups that took place in quick succession. But its villages were quiet and picturesque, set under groups of tall trees, and on the higher ground of the dense tropical countryside. Groups of people sat around talking – and sometimes staring in disbelief as we rode by.

Bissau City, the capital, seemed more familiar than many West African towns. Road-building had been taking place and the main road into town was a dual carriageway, with several new buildings springing up among the ruins of the humidity-stained Soviet-style blocks which had been heavily damaged during the war. That evening we walked around the compact and quiet city centre. The focal point was the presidential palace, which was heavily shelled during the war and stands as a silent reminder of times to which the surprisingly upbeat locals do not want to return.

As we headed back to our hotel, later that evening, the town came to life, with loud music coming from bars and groups of people gathering to socialise and laugh. We took a ride in a battered taxi, where music bellowed from broken speakers and frequent stops were made to pick up and drop fares. As much as we wanted to stay longer, deadlines beckoned. Bissau was the furthest point of our expedition and all roads from now to Dakar would be ones we were retracing. We both felt sad to see Bissau City disappear behind us as we headed north along now familiar roads. It’s a terrible shame that political unrest has once again returned to this beautiful, but exhausted, country. 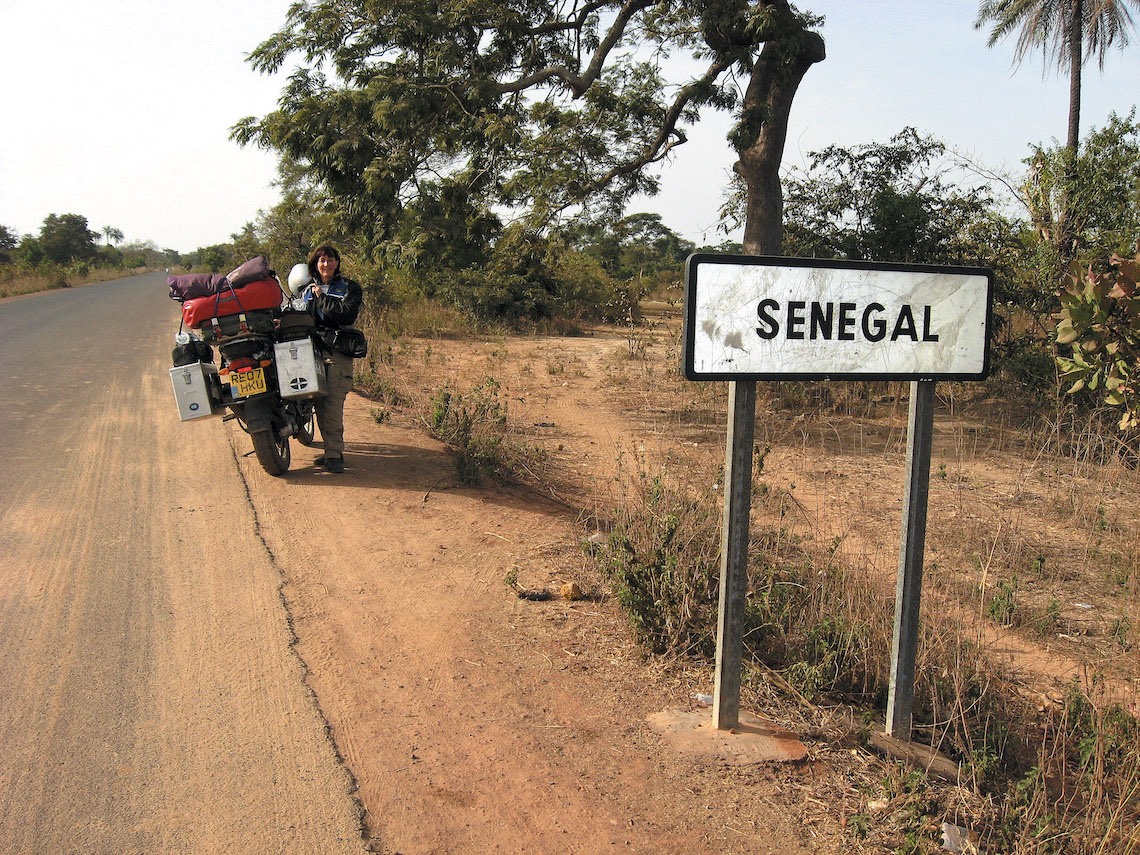 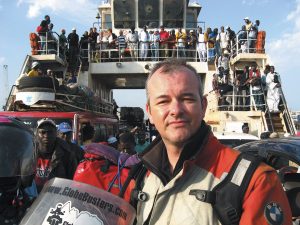 Craig Carey-Clinch is one of the best-known lobbyists in motorcycle industry related political issues, both in the UK and Europe. A published writer, journalist and ex-RAF engineer, Craig is also an experienced transcontinental motorcyclist who has undertaken several overland journeys by motorcycle, including three crossings of the Sahara to promote awareness of the charity Motorcycle Outreach, of which he is a director. He also led a GlobeBusters adventure to Senegal and Mali. His most recent journey was a coast to coast crossing of Canada during 2011. His company, Rowan Public Affairs, offers a range of strategic marketing and policy support services to the motorcycle world. 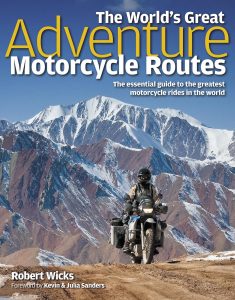