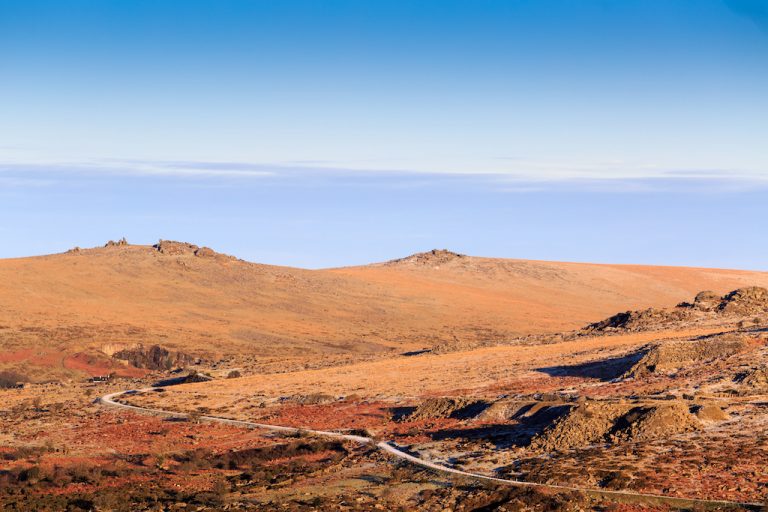 Ollie Rooke delves deep into the myth and legend of King Arthur on a route through the stunning landscapes of South West England. 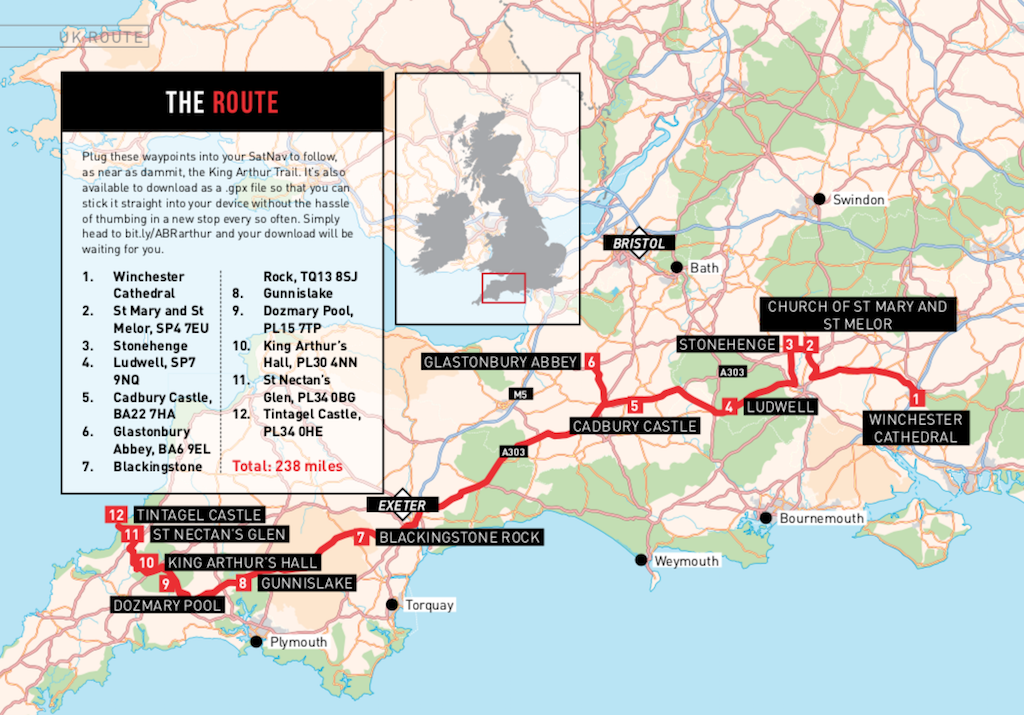 The Dark Ages are a strange and relatively unknown period of British history. After the fall of the Roman Empire around 500AD, society regressed and few written histories or records exist from the time to shed much light on what took place for almost half a century.

The little that we do know, mostly involving near-constant Saxon invasion, has been gleaned from popular stories, medieval histories written much later down the line, and folklore. Yet, despite the scattered tales and patchy narrative of the era, a single story has persevered throughout, the tale of a great British warrior, King Arthur.

First recorded in romantic medieval histories some 600 years later, legend tells of a fearsome knight who spent his time in what is now known as Cornwall, repelling Saxon invasions, winning battles almost single-handedly, and even fighting mythical creatures such as dragons.

Stories and songs continued to be told, all linking back to a King named Arthur. The medieval writers of the 13th century had a field day. Romantic histories embellished the legend, detailing the story of Arthur and his magnificent castle of Camelot, his Queen Guinevere, the Knights of the Round Table, and his sword Excalibur.

The legend of King Arthur lived on through nearly 1,000 years of British history, shaping national identity, local legends, and plenty of famous tourist attractions along the way. Whether or not you believe in the stories, we decided that the idea of a legendary British Knight marauding around one of our favourite places to ride in the UK, Cornwall, was simply too good to dismiss.

So, this ABR route is dedicated to the legend that is King Arthur. From one of the only existing great Round Tables in Britain, we travel to an ancient hill fort that could once have been the site of Camelot, before heading to the site of an epic hurling match between Arthur and the Devil. Finally, we finish up on the rugged Cornish coast at Tintagel Castle, where the legendary King’s own journey begun.

Along the way, we ride a collection of brilliant roads cutting through South West England’s remote moorland, and along tree-lined routes that embody the mystical nature of the legend that we’re chasing.

Covering around 238 miles, this route is perfect for a long yet rewarding day in the saddle, followed by an evening on the Cornish coast. But, if you’re keen to make a long weekend of it, and spend more time exploring the sights, it can be split into two days with an overnight stay in, or around Exeter.

Our route begins in the cathedral city of Winchester and a look at a round table. Okay, so it’s not the Round Table, which is said to have been able to seat King Arthur and 150 of his loyal knights, but it is certainly a worthy imitation. Constructed from English oak, this replica was commissioned by King Edward I in around 1290. It measures more than 5m in diameter and weighs in at an eye-watering 1,200kg.

The names of Arthur and 24 of his most famous knights are written around the outside of the enormous table, which now hangs on the wall of Winchester Castle’s Great Hall. King Henry VIII had both the Tudor Rose and a depiction of King Arthur painted on the table during his reign, which may explain why the artist’s imagining looks suspiciously like Henry.

Moving on, we take a short ride to the small town of Ames- bury, also known as the oldest occupied settlement in Great Britain, to visit the Church of St Mary and St Melor. Originally known as Amesbury Abbey, legend has it that Guinevere made the convent here her home after Arthur was killed in battle, spending her remaining days fasting and praying.

The neighbouring nursing home is now named Amesbury Abbey, so to spare its residents from facing down an army of invading adventure bikers, be sure to enter ‘Church of St Mary and St Melor’ if you’re inputting waypoints into a SatNav.

Leaving Amesbury behind, we hop onto the A303 which takes us past Stonehenge. As Arthurian legend goes, these giant stones were apparently brought over from Ireland by a force of nearly 15,000 Britons. They were led by Arthur’s father, Uther Pendragon, to commemorate the killing of British chiefs by the invading Saxon forces during a truce.

With the stones on English soil, it was left to the magician Merlin to fashion them into a worthy burial site. In truth, archaeologists date the construction of Stonehenge to much earlier than these events, and it’s unlikely that Merlin did in fact use sorcery to build this unique piece of British heritage. However, the story highlights just how intertwined the tale of King Arthur has become with the mythical history of South West England.

Leaving Stonehenge behind, we turn off the A303 for a ride through the beautiful Cranborne Chase Area of Outstanding Natural Beauty, before arriving at Cadbury Castle. Local tradition has long held that this Bronze and Iron Age hillfort was the site of King Arthur’s legendary court at Camelot and, as we approach the small village of South Cadbury, it’s easy to see why. 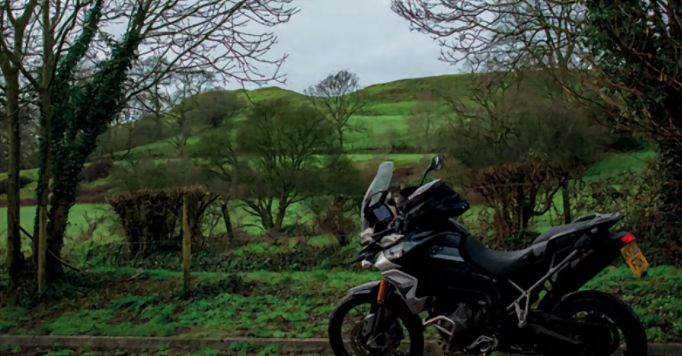 Rising above the flat surrounding fields, it would have made the perfect vantage point from which King Arthur could have spotted marauding bands of Saxons moving west. Here, you can stretch your legs with a walk up to the castle to enjoy the sweeping vistas, or simply grab a bite to eat from The Camelot pub at the base of the hill before continuing on. 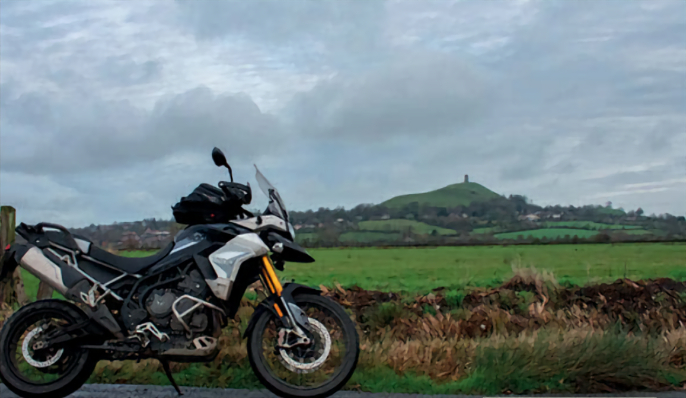 Throughout Arthurian legend there are repeated references to the mystical island of Avalon. It’s said that Arthur’s sword Excalibur was forged on the island, while he was also reportedly taken there after being mortally wounded during the Battle of Camlann. One site that has been proposed as the real location of Avalon is Glastonbury Tor. The hill rises steeply above the marshes and wetlands that surround it, while history does also suggest that it was once an island.

Other events have lent credibility to the idea too. In 1190, a group of monks at Glastonbury Abbey seized upon the area’s reputation and claimed to have dis- covered the bones of Arthur and Guinevere buried in a hollowed-out oak tree. While some dismiss it as a stunt designed to raise funds to repair the Abbey, the legend caught hold and the remains were reburied in the presence of King Edward I some 100 years later. The grave remains there today and you can visit it in the ruins of the old Abbey. 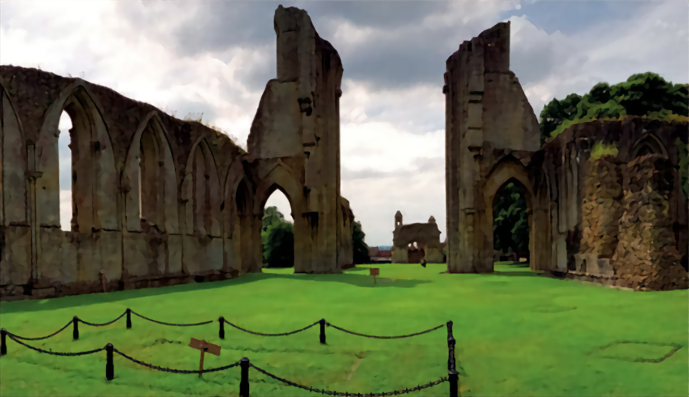 After paying our respects at Arthur’s grave, we hop back in the saddle to enjoy some of the best riding of the day as we head through Devon in the direction of Dart- moor. Arriving in the National Park, we explore a series of tight, steep-sided, single-track lanes on the way to our next stop, Blackingstone Rock.

The granite tor rises high above a small car park located at its base. Blackingstone Tor and Hel Tor, another notable rocky outcrop located just over a mile away,
are said to have been formed when King Arthur had a disagreement with the Devil, as legendary Kings do. They decided to settle their quarrel by standing on two separate hills and hurling rings at each other in a fierce game of quoits.

As the fable goes, when the rings hit the ground, they immediately turned into stone, with the epic battle leading to the formation of the two tors as they are today. While we wouldn’t recommend throwing anything off the top, if you have the time, the short walk to its summit will reward you with spectacular views over Dartmoor.

With the looming presence of Blackingstone Rock now firmly in our mirrors, we continue on a series of steeply rising and falling roads through Dartmoor. The riding here feels almost mystical, as densely packed, curling trees form archways over the road, only allowing slivers of light to punch through their canopy.

Happily, our next stop is just as enchanting as the roads, Dozmary Pool on Bodmin Moor, home of the Lady of the Lake. The fairy-like enchantress, who is said to dwell in the lake, was responsible for giving King Arthur the sword Excalibur, while Dozmary Pool is also where the knight Sir Bedivere disposed of the same sword at the warrior’s request after his death in Avalon.

Spookily, as the tale goes, when the sword was thrown into the blue waters of the lake, an ethereal hand reached out and caught it, before returning to the deep.

Staying on Bodmin Moor, we take a short ride on narrow country lanes through wild and remote Cornwall, to our next destination, King Arthur’s Hall. It’s a short walk from the road, but well worth the effort if you have the time. This huge megalithic enclosure is formed of 56 stones arranged in a large rectangle, with each stone facing inwards like a series of assembled thrones. Legend says King Arthur is said to have frequented the site.

Our penultimate stop of the day is at St Nectan’s Glen. Widely regarded as one of the most spiritual sites in the UK, this area of ancient woodland is home to a stunning 18m high waterfall that punches a hole through the mossy covered rocks.

It’s said that the Knights of the Round Table received blessings here before Arthur before he sent them on the quest for the Holy Grail. St Nectan’s Glen closes at 4.30 pm, so if you’re tackling this route in a single day, you may miss out on experiencing it for yourself. However, it’s well worth a visit if you have some time before returning home the day after, or if you’re tackling the trail over the course of two days.

Finally, our journey ends at the very beginning of the King Arthur legend, Tintagel Castle. That’s right, the castle ruins are said to be where the great King was conceived, with the help of Merlin’s magic and a hefty dose of trickery.

As the story goes, Arthur’s father, Uther Pendragon, King of Britain, fell in love with Igraine, wife of Gorlois, Duke of Cornwall. Uther declared war on Gorlois to win Igraine for himself. To protect his wife, Gorlois sent her to Tintagel, an impenetrable castle surrounded by sea on almost every side, with just a small rocky pathway for access.

Knowing there was no other way to get into the fort, Uther summoned Merlin and promised the wizard his first-born son if he helped him inside. The sorcerer is said to have used magic to make Uther look like Gorlois, and Uther made his way past the guards unchallenged. That night, Arthur was conceived and the rest, as they say, is history.