The Heart of England Way by motorcycle 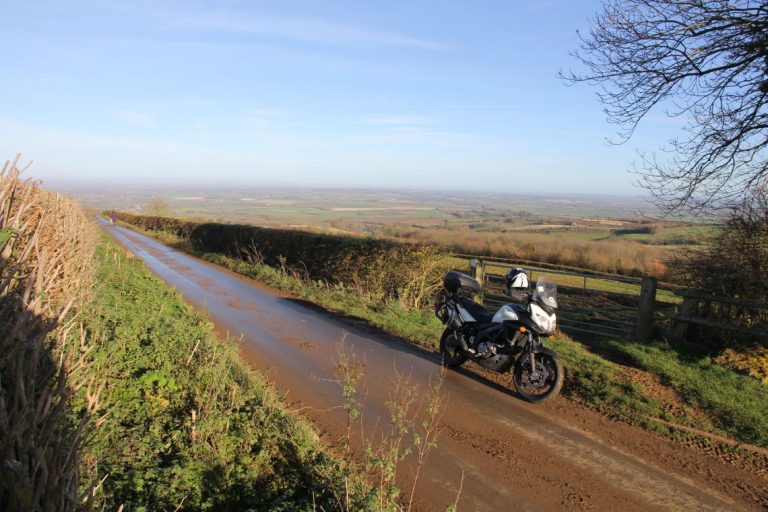 In the first of a series of new features about discovering Great Britain from the saddle of a bike, Alun Davies rides the Heart of England Way

Many years ago, in a pre-ABR life, I lived in a house at the end of a dirt track near the Warwickshire market town of Alcester. On a fence post opposite the front garden, someone had nailed a small circular sign about the size of a tea saucer. It had a white background a graphic depicting a clump of trees and a line of green writing.

The sign read ‘Heart of England Way’, which I discovered was a long-distance footpath approximately 100 miles long. From early spring until late summer walkers would pass by the front of the house, usually hiking in a southerly direction, following the Heart of England Way (HOEW) signs from the northern starting point in Milford, Staffordshire en-route to the southern terminus in Bourton-on-the-Water, Gloucestershire. I promised myself that one day I’d hike the route.

We moved house over ten years ago and I never did get to backpack the whole of the HOEW in a single hit but when it was decided to start a series of features in ABR which would follow as near as possible to the long-distance footpaths of the UK the HOEW was first to come to mind.

A long-distance footpath is described as any way-marked route over 30 miles in length though most are far longer with the big daddy of UK trails, the South West Coastal Path, covering 630 miles. There are over 250 long-distance footpaths in the UK passing through the finest scenery the country has on offer and many have major historical significance. What better way to discover Britain on a motorcycle than by following as close to these footpaths as possible. In some instances, where they are designated as legal rights of way,  you can even ride along them.

The idea is not necessarily to seek out and ride the best roads – though we’ll take them when possible – but to discover and experience the scenery, attractions and history from the seat of a motorcycle. By following a list of way-marked towns and villages along the trail and then plotting the route in stages via a Sat Nav it’s all about discovery and enjoying the ride.

The HOEW runs roughly north/south from a point at the northern edge of Cannock Chase before it takes a sweep to the east to avoid Birmingham and then heads south towards the finishing point in the Cotswolds. Although it passes through an area which contains one of the largest urban conurbations in the UK you wouldn’t know it as most of the route sticks to the back roads of the Warwickshire countryside and offers an altogether different view of the Midlands.

From Milford Common on the northern edge of Cannock Chase, I set the Sat Nav for Castle Ring, an Iron Age hill fort on the highest point of the chase. The idea was not to follow the exact route set by the Sat Nav but to take the road that looked the most interesting whilst still heading in the general direction required.

The ‘Chase’ has been designated an Area of Outstanding Natural Beauty and a Site of Special Scientific Interest and there are many points of interest both in the natural history sense and as a reminder of our more recent past including war memorials for Commonwealth, German and Polish troops.

Next up was the short ride to Lichfield and a stop at the mighty impressive Gothic Cathedral, which is noted as being the only medieval cathedral in the UK with three spires. With Drayton Bassett, the next point in the Sat Nav lovers of Thomas the Tank Engine will be drawn to the nearby Drayton Manor Theme Park whilst twitchers will make great haste to Kingsbury Water Park on route to Shustoke. The water park makes for an interesting stop and comprises of 15 lakes in old gravel pits spread out over 600 acres. It is renowned for its birdlife.

From Shustoke the route follows country lanes between the cities of Birmingham and Coventry heading to Meriden, the town that claims to be located in the geographical centre of England – the actual centre is Fenny Drayton 11 miles to the north.

Meriden is the spiritual home of Triumph motorcycles who manufactured bikes here from 1941 until 1983 – check out Bonneville Close, a street built on the site of the original factory.

From Meriden to Alcester the route passes through beautiful Warwickshire countryside and well-kept villages which belittle the traditional dour image of the Midlands. This section of the route also contains a number of green lanes (un-paved roads which are legal rights of way) so it’s worth picking up a copy of the local OS map if mud plugging’s your thing.

From Alcester, there’s a pleasant, legal, farm track that goes up and over the hill between the town and Wixford en-route to Bidford on Avon. Although a section of the track is gravel and dirt it’s easily ridden on any bike and far more in line with the route than the dual carriageway, the Sat Nav will take you on.

You cross the river Avon in Bidford on a narrow stone bridge on what was once Ryknild Street, an old Roman road. You’re now only seven miles from Stratford upon Avon, always a good stop off place for lunch, to mooch around and recite some ancient prose.

Back on the trail, the country lanes to Mickleton take you through the upper end of the Vale of Evesham (the world centre for asparagus), past the home of recently deceased author and publisher Felix Dennis and alongside Long Marston Airfield the site of the Hells Angels annual Bulldog Bash festival.

The road from Mickleton to the chocolate box village of Chipping Campden takes you up the steep northern edge of the Cotswold escarpment overlooking the Vale of Evesham with views, on a clear day, extending to the Malvern Hills and mountains of Wales.

The ride through the Cotswolds to Bourton-on-the-Water is via a rural landscape dotted with pretty Cotswold stone villages, stately homes and historical towns. There’s also a number of green lanes in this northern section of the Cotswolds, some of which have been featured in past issues of ABR. Sticking with the road route don’t miss the market town of Stow-on-the-Wold and the honey-pot villages of Upper and Lower Slaughter.

From the Slaughters, it’s only a few miles to the end of the trail and the tourist trap town of Bourton-on-the-Water, which is also best known as the lunch stop on the ABR Midlands Rally ride out.

In the next issue of ABR, we’ll be riding the Coleridge Way from Nether Stowey to Lynmouth.

You are never more than a couple of miles away from a town, village or country pub on this route. You can find food of every variety in Stratford upon Avon and don’t miss the absolutely delicious Ice Cream in Henley in Arden – the ice cream shop is on the right-hand side of the main road when following the route north to south.

If you’re planning on staying a night in the Cotswolds you’ll be spoiled for choice when it comes to quaint B&Bs and country hotels. Stratford upon Avon has campsites and a huge number of bedrooms of all price levels. www.laterooms.com is your friend.

Put these in your Sat Nav to follow the Heart of England Way.