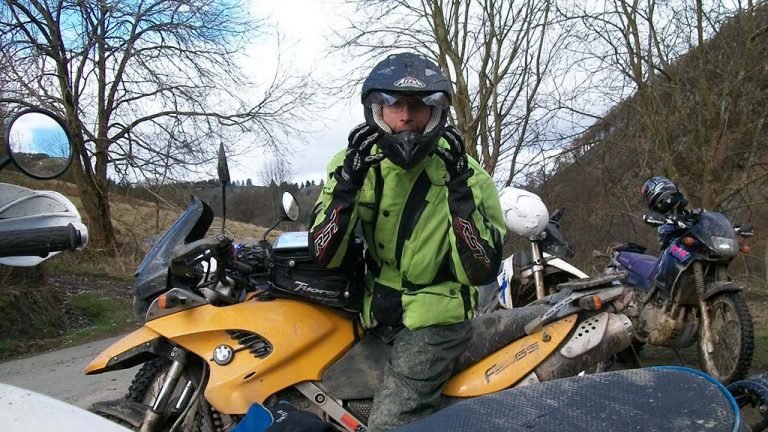 Imagine being given 12 months’ free reign to ride wherever you want. Money and time are no objects, and neither is the boss… Michael Bradley, this is your grown-up Gap Year

Let’s face it, I’ll never visit everywhere on this planet. It’s just not possible. So I’ve got to pick my experiences to some degree. As a younger man, while travelling, I promised myself that my next big adventure would be in an English-speaking part of the world so I’d be able to communicate more with the people I meet.

A lot of my formative in­fluences came from the good old US of A. I am undoubtedly of the TV generation, weaned on The Lone Ranger and Dukes of Hazard; BJ and the Bear and Streethawk. America has played a massive part in my life, but I’ve never been there. A year gives me plenty of time to mooch about this great continent, I reckon.

But it’s a big place America, innit? I need a plan (albeit a vague and extremely flexible one). So I’m thinking of taking inspiration from every biker movie that found its way into my dad’s Ferguson Videostar and rolling them into one big fantasy trip.

The most life-shaping movie I ever watched must be Easy Rider. I soaked that film up like a sponge. It set the stage for many years of disenchantment with ‘normal life’ and gave me a few clues how to get out of it (literally). A quick search on the internet throws up several sites covering the route of Billy and Captain America, and to be honest, it’s a pretty awesome route to chuck some spare time at.

Before I head east, I’ll check out San Francisco. Ride over the Golden Gate Bridge and cruise up and down the hilly streets of Bullitt and Dirty Harry fame. Then, starting again in Ballarat, California, I’d roll south out of Death Valley and pick up the original Route 66 (not much left of it now, but still traceable with the aid of the internet). There’s so much going on along this route that you just can’t go wrong really. I’d shelve the plan for some time in LA and spend some time soaking up the beach vibe there. Maybe even learn to surf. Nice.

Back on the 66, I’d then take a left onto Route 93 and check out Las Vegas. Get drunk, maybe marry my bike – hey! What happens in Vegas stays in Vegas, right? I’d maybe get a job or two here, blend in a bit and meet some people and then I’d ride out on the 93, onto Flagstaff and take Highway 89 to the caves at the Grand Canyon where I’d do a bit of wild camping and soak up the natural splendour.

After leaving the canyon, I’d head northeast up what is now Route 163 to Mexican Hat, Utah, then cut east over to Farmington, New Mexico. Just past Farmington, I’d take a quick detour up to the town of Durango and the Animas River Gorge to check out the spot where Butch and Sundance jumped off the cliff to avoid capture in their 1969 movie.

Then, cutting west a little, I’d jump onto Highway 145 (the San Juan Mountain Skyway) which takes you through reportedly the most beautiful part of the Rocky Mountains. I’d also explore Highway 50 and then Highway 9 along the renowned biker roads up to Denver Colorado to inspect this old gold mining camp and have a tour of the National Mint which was established only – five years after discovering gold in 1858.

I’d then travel south again, down Route 25, to Taos and fall back into the Easy Rider mood. Much of the movie was shot here and the town itself hasn’t really changed. Then I’d buy myself a bottle of Jim Beam and go visit DH Lawrence’s grave, to toast the guy who gave us Lady Chatterley’s Lover, a half-decent story, but more importantly, my introduction to Sylvia Kristel in the 1981 movie version (what a woman!).

Heading further south now to Albuquerque I’d check out Acoma Pueblo (The Sky City), built on top of a sheer-faced rock and thought to be one of America’s oldest continuously inhabited communities, dating back to around the 12th Century.

Now fully immersed in the Messa culture, I’d point those bars east and keep heading straight all the way through Amarillo into Oklahoma. Then I’d hang a right, cutting south down to Dallas and check out the rodeo before dropping the bike an easy left to bring her up south-eastwards along Route 20, then Route 49 to another pivotal part of the Easy Rider boys’ destination: Morganza, Louisiana.

The café where they met the rednecks was torn down a few years ago sadly, but a plaque has been put there in memory of the townsfolk who were in the movie. At the time, Dennis Hopper told the film crew to “let it be known” that he, Jack Nicholson and Peter Fonda had just raped a girl on the outskirts of town. He wanted the townsfolk’s animosity to be realistic, but later admitted that he may have gone a little far! These insane ideas and the constant heavy drug use resulted in Dennis reportedly having to replace his full – film crew at one point as they refused to work with him any longer.

My next destination would be New Orleans. While taking it easy in this Mardi Gras city I’d gawp at the devastated areas, marvel at its peoples’ resilience and ponder how the world’s largest power can’t even look after its own. I’d then take Highway 105 to Krotz Springs where our boys Wyatt and Billy are shot down. Well that’s its folks, my dream ride. Hopefully, I’d have just enough time to head north into Memphis for a look at Graceland. I think the only real problem would be stopping…

Any freak with a positive mindset.

That’ll have to be the reliable, fun, highway- crunching, off-road freedom ticket that we all know as the BMW 1200 GS (other motorcycles are available).