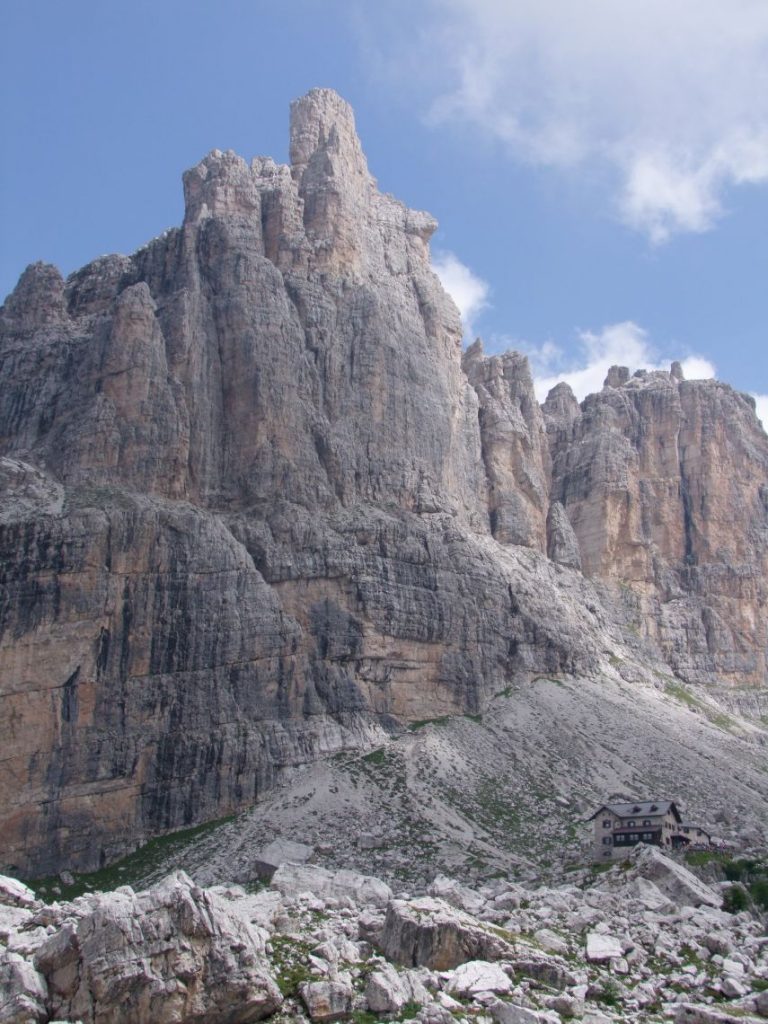 Got a week to spare? Of course, you have. Pack up those panniers and ride on over to Europe for some of the finest motorcycle roads and most spectacular views in the World. Alun Davies (and NASA) head on over to the Italian Dolomites.

The word coming out of NASA was that at 11.15 pm Central European time on 20th July 2009 the crew of the International Space Station had gathered in a frenzied huddle to discuss the significance of the unexpected sighting.

By all accounts what followed was 30 minutes of heated debate of a sort that had it taken place on Terra Firma would have ended in violent, possibly murderous, blows. Sensing that the situation needed calming, the senior officer rose to his feet, held out a hand to signal a halt to proceedings and pronounced; ‘I’m telling you now, and I don’t want any fecking arguments, what we saw was a Triumph Tiger 885, a KTM 990 and a BMW GS800 buried under jerrycans’.

Meanwhile, back down on planet earth, after a long, long day in the saddle, we’d parked up at the Margherita Hotel in the Italian village of Cimolais and were supping on cool, light beers as a bright shining light sped across the night sky from right to left.

It’s not every day you get to see the International Space Station pass overhead, unless, of course, you happen to live in Cimolais or any other location below its 15 times a day orbit. As the beer worked it’s soothing, late at night magic, I looked up and wondered if the astronauts travelling 173 miles above and at 17,227 miles per hour appreciated just how lucky they were.

Our Dolomites adventure had started five days previously in our home town of Stratford upon Avon. Jason on his angular KTM 990 looking like a slick extra out of a Batman movie; Spencer with a fully loaded BMW GS 800 taking on the appearance of a man who was never going to return and yours truly with bin liners flapping from an ageing 885 Triumph Tiger.

First off was a quick blast across the motorways of northern France and Germany to a campsite 10 miles from the lakeside city of Friedrichshafen where we pitched our tents in conditions that would make a tropical storm look like a tap with a drip. Within minutes our tents were…actually, we’ve no idea what happened to the tents. It was straight up the local pub, where the landlord and his good wife were so concerned about our prospects of surviving a night under canvas without breathing apparatus they offered us a room for the night. Sorted.

Friedrichshafen is home to Europe’s largest ‘Outdoor Exhibition’ where the great and the good in the industry meet up every year to discuss tents, camping and climbing gear, and that was our reason for stopping off. This daytime activity, is, of course, a cover for the main reason for being there, which is to party like Ray Mears with a fridge full of roadkill at night.

Friedrichshafen is also a gateway city to the northern Alps, the birthplace of the Zeppelin and about an hours ride from the Touratech factory. And this last point was terrific news for the German manufacturer and a tragic geographical coincidence for Spencer’s bank manager.

During the next day, as I visited stands laden with tents, camping and climbing gear at the exhibition, Spencer and Jason headed north to secure the financial survival of Touratech and its jerrycan department for the next three decades. With our work over, we were free to head south through a rain-soaked Switzerland and onto the fantastic Alpine roads and magnificent scenery of the sun-drenched Italian Dolomites.

If you haven’t been to the Dolomites then my best advice is to stop what you’re doing right now and quit the job, divorce the missus, put the kids in a home, do whatever it takes to enable you to throw some stuff in the panniers and head on down there. Having travelled, trekked and climbed in most of the great mountain ranges of the world over the past thirty years I’m struggling to think of scenery that compares to that found in these northern Italian limestone mountains.

Travel writers often pen the term, ‘like castles in the sky’, to describe peaks and pinnacles though very few truly justify the expression. The Dolomites, on the other hand, are fully deserving. Huge, vertical grey limestone cliffs rising 1000’s of metres out of lush Alpine meadows, slender towers of precipitous white rock, jagged skyline ridges looking for all the world like the turrets of a formidable fortress.

This mountain range is as spectacular as any in the world, period. And if you want to check out what I’m talking about here, in the comfort of your armchair, then grab of copy of Sylvester Stallone’s film Cliff hanger and the eye-popping opening scene where Sly drops the girl. The storyline will have you believe it’s in the Rocky mountains USA; it’s not, it was shot in the Dolomites. I know so, I’ve climbed it, and come back with the girl.

Where ever you ride in this mountain range the scenery just gets better, it’s a case of how low will your jaw drop and how bad will your neck ache as you crane to view the huge rock faces overhead. And it gets better still when you discover that the roads which pass through this magical place are some of the finest and best kept in the Alps. Switchbacks? You’ve got them, by the hundreds. Smooth tarmac? at your service. Good food, great drink, fine campsites and hotels. The Dolomites are a biking nirvana, and then some.

Anyway, enough of the gushing, I’m off to the Dolis.

The old carb version of the Tiger and affectionately known as a ‘Steamer’. Whipped the ass off the KTM and GS on the motorway sections and, when push came to a frenzied, black mist shove, kept right up the tailpipe of an Italian on a Fireblade over a twisty Dolomite pass – though I’ll not be doing that again.

The battleship of the group and main load carrier – including individual kitchen sinks. Reliable and perky enough not to feel out of place in more powerful company and topped the MPG chart by, er, miles. The best of the bunch if you’ve a fetish for farkling.

With its super slick angular looks the KTM won the catwalk competition and just about pipped the Triumph through the twisties. Let down by a dismal fuel range and a recurring clutch problem but the exhaust note more than made up for those.

5 most spectacular sights in the Dolomites

Alun Davies
Publisher of Adventure Bike Rider, a man with a passion for lashing bin liners to old Triumph Tigers. Has suffered from serious bouts of depression since the age of two when his dad told him he supported Cardiff City.

Spencer Grey
The ‘accessories king’. Surely, Touratech are sending this man multiple Xmas Cards. When WW3 breaks out, Spence is your man for jerrycans (Guinness world record holder 2010 for number attached to a GS800) and tin foil hats.

Jason Zeil
Owns a gym, cycles to France for breakfast most mornings and never breaks a sweat unless he’s riding behind Spencer. Mr  Organised of the team and the man you can rely on for the stuff you’ve left behind