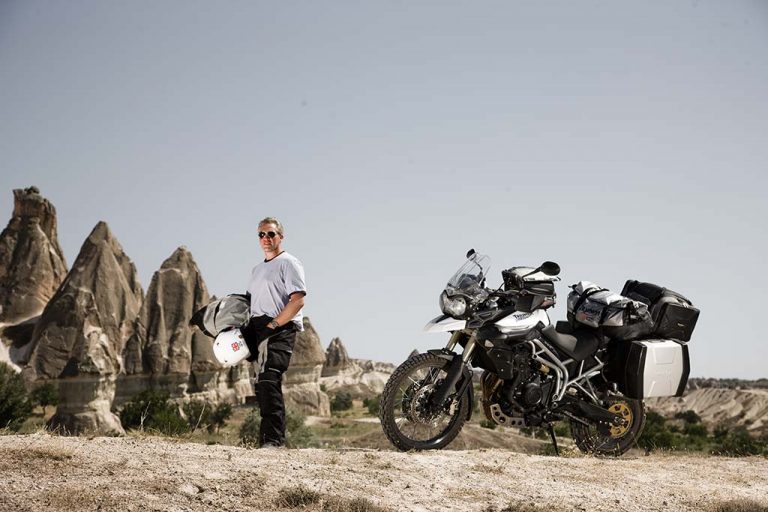 Do you yearn to earn a living from the seat of a motorcycle? Test rider Julian Amos puts brand-new pre-production Triumphs through their paces over some of the world’s best biking terrain

As a school boy, I remember wondering what on earth it must be like to be a motorcycle test rider. In the many old books and magazines I’d got, such as ancient copies of The Blue ‘Un and The Green ‘Un, it was always the tales of test riding daring-do that thrilled me. Real Boy’s Own stu­ff! I suppose it was about that time that I decided I wanted to be a test rider when I grew up. Either that or a rock guitarist…

As it turned out, I never did grow up. I began attempts at musical stardom around the age of 14 and actually did pretty well, but it wasn’t for another 14 years after that that I got my chance to become a test rider. I needed a certain John Bloor to come along ­first and resurrect Triumph Motorcycles before I’d get a shot at attaining my dream biking job.

My Dad rode motorcycles all his life and after leaving the RAF he worked at BSA and Royal En­field. There was always a bike in our garage and I spent many happy hours helping him clean, polish and ­fix them. He must have had some sympathy for me when I went to see him and mum one day with hope in my eyes, to ask if they’d buy me a scrambler. Two brothers who were school friends of mine had somehow managed to buy a new DT175 and their old Suzuki 80 ­field bike was going cheap. In fact I could have it for just 15 quid! Easter was around the corner and somehow I managed to talk mum and dad into buying me the bike instead of chocolate. A wise choice.

And so it came to be that I was ­finally sitting astride a bike of my own. The spot I’d chosen for our first outing was a dirt track at the end of our road. I was still sporting my school uniform; no helmet, no gloves. As I gripped the clutch lever as tight as I could, my knuckles white with the force, my dad stomped the gear lever into ­first and a few seconds later I began the long motorcycle journey that I’m still travelling on now. To be honest, on that first occasion, dad forgot to show me how to change into second. I spent the initial two weeks of my new-found freedom riding about in first! It didn’t dampen the fun, though, and I can still remember all the reasons why I fell in love with motorcycling. Just about all bikes (and old cars) hold a fascination for me – from a small two-stroke single, to a Harley, to a vintage flat tanker or the latest sports machine. I even love pushbikes, especially old ones! I’m probably the most unbiased motorcyclist you could meet, so I hope I’ve managed to dispel the myth that test riders are not approachable!

My ­first job in motorcycling was as a dispatch rider in the mid 90s. I mostly worked out of Birmingham, but spent plenty of time in and around London too and eventually ended up doing lots of long-distance work. I’d been working as a dispatch rider for a couple of years when I landed the job with Triumph, just in time too, as the halcyon days of motorcycle couriering was coming to an end, due mainly to the growing popularity of e-mailing. It was still pretty much the fledgling years for Triumph as a company; I managed to talk my way in to my job using my father’s history with BSA and Royal En­field and my own riding prowess on my dirt bikes and recent dispatch riding. I doubt this approach would work today, though, as a lot of my test riding friends and colleagues are quite famous racers!

My first official call of duty with Triumph was the job of mileage accumulation as part of an emissions sign-off. This meant riding 15,000kms at varying speeds on a strange-looking machine that everybody called a ‘695’. It was winter 1996 and I remember shivering my way around Motor Industry Research Association’s (MIR) number 1 circuit hour after hour, week after week. From the start, I found myself working with a great bunch of blokes, and the banter, good humour and care we take in our work has never changed. My charge on that ­first assignment, the ‘695’, looked like a Daytona 595 to me but it had straight handlebars and the engine looked a bit different. In the end it turned out that it was a disguised prototype of the first generation Sprint ST!

Somehow I managed to hang on to my new job, occasionally getting laid-off for a month or two in between tests, when I’d have to go back to dispatching or take any poorly paid job I could ­ find, and there was always weekend gigs with my band.

As the company grew, things gradually got busier at Triumph and eventually my boss found I was useful to have around on a more permanent basis. It was a time of growth for me too, learning all the techniques for the huge number of different tests we carry out on the development machines. Among the more usual tests are the dreaded emission cycles outlined above, which Triumph kindly assigned me in my­ first few months, and the equally dreaded ‘pave testing’ which is designed to thoroughly trial the structural integrity of the machines and accessories over a circuit of Belgian-type pave. It also tests the spine and resolve of the pilot! Then there’s noise testing, brake overload, clutch abuse, track endurance – basically hooning-around a test track working the engine to within an inch of its life. There are also all kinds of road and track tests to evaluate gearboxes, handling, brakes and tyres – just about everything you can imagine really. We carry out our work thoroughly, after all, it matters to us test riders personally that the machines Triumph builds are as good as we can help them to be.

If all this sounds a bit out-there, you wouldn’t believe half the stuff we’ve done that I’m not allowed to tell you – a large part of the job involves being trusted to keep industry secrets: I could tell you, but then I’d have to kill you. Most of my test riding colleagues have one or two screws loose; it helps if you’re a bit barmy.

For the last three years I’ve specialized as a fuelling calibration test rider, which sees me based back at MIRA most of the time. I work alongside calibration engineers who tune the prototype bikes to make sure Triumph is reaching the strict emissions regulations. It’s my job to ride and log the speci­fic tests to give the calibration engineers the information to work with; to give them feedback regarding how the machine feels and to ensure the drivability is up to scratch. It’s a delicate balancing act most of the time, which requires a sensitive touch to feel what’s going on with the engine. It’s a lengthy process, too. Months of work go into each machine and then there are the aftermarket exhaust systems and other fuel grades to work with which can take just as long as the initial tune. Then we all go off and do it all over again somewhere hot and then again at high altitude. No stone is left unturned in the pursuit of perfection!

The part of the job that springs to mind for most people when they think of test riding is the road mileage aspect – simply riding the (usually pre-production) bikes on the road to look for signs of problems in the ‘real world’. I spent quite a few years doing this, and yes, when the weather is good all is well with the world then there is no place any motorcyclist would rather be. Come winter, though, you’ll ­ find yourself all alone a couple of hundred miles from home (on a few occasions, a couple of thousand miles from home) wringing wet and unable to stop shaking from the extreme cold.

At these times things can suddenly seem quite bleak, but those days riding dispatch prepared me well for these sorts of eventualities. I suppose it takes a certain type of rider to do this job; hours and days alone on the road. Every test rider has their favourite routes that take in all kinds of roads, gradients and terrain – keeping an eye on the road and a careful watch for any tiny nuances in the way the machine handles the various situations. I suppose we all ­find our own tucked-away places to stop for a cuppa, too. I like to find somewhere in the back of beyond where I can hide the bike from prying eyes and relax, make notes and take ­five minutes to regain some reality in a lonely world far from home.

At a rough estimate I’ve topped over one million road miles on Triumph test machines. I’ve been lucky enough to ride over mountain tops testing at high altitude and across desserts for hot environment testing during my time; at last count I’ve taken various Triumph models through 24 different countries. My favourite place to ride is probably right here at home though! I love Wales, Cornwall and Devon, but the place I’ve never ridden that I hope to at some point is America. I’ve visited, but never by bike.

I’ve had a couple of nasty crashes in my time, but have usually been able to walk away under my own steam and have had only one ambulance trip, when I threw myself and a 675 Daytona down a mountain in Southern Spain. Luckily I sustained only a broken collar bone and some serious bruising, but it was still enough to keep me off bikes for two months. Still, all in a day’s work! As much as I love test riding though, some days I have to confess I’m tempted to break out my guitar again… watch this space!