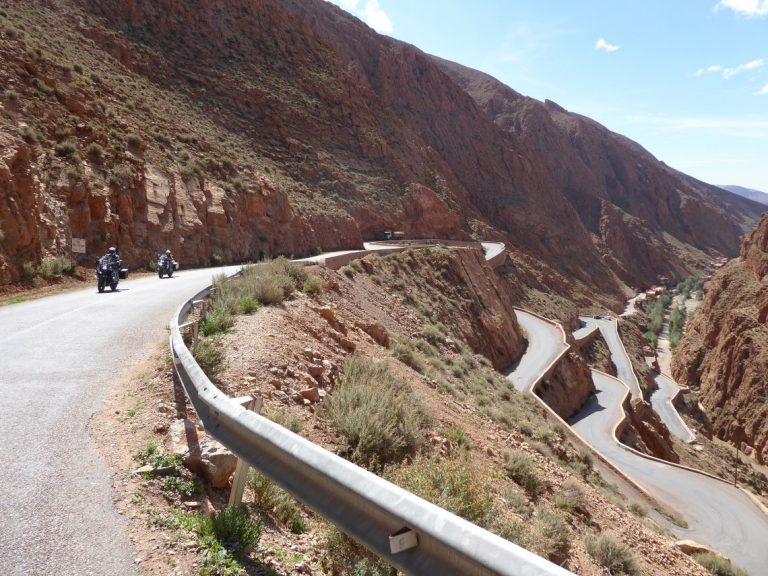 The Dades Gorge road starts from Boumaine de Dades on the N10 some seventy miles west of Ouarzazate and heads north as a twisting route for almost thirty miles before the tarmac runs out. In this space, the road is dramatic and contains ‘those’ hairpins so often photographed. It twists and turns along the sides of the gorge on sometimes poor, sometimes pristine tarmac.

You will always meet some traffic although it is not busy and it is not a route for big trucks. In the riding season, it’s almost guaranteed that you’ll meet some other bikes, mostly going to the top of the hairpin climb and coming back. They are missing the best of the route.

If you are up for a challenge then keep going. The road runs all the way to Agoudal. Forty miles of dirt road. It is technical on a big adventure bike with a hard, rocky surface for the most part, along with some loose gravel hairpin climbs, some water crossings and a few sections of compacted mud.

There are sheer drops of several hundred metres and, as it is all single track, passing any oncoming traffic means stopping on the cliff side (not the drop side) and inching and squeezing past each other. It is not one to attempt on a big bike after rains and not at all in the winter.

At its peak, it is over 2,000m above sea level. The reward? Almost uninterrupted two-lane black tarmac, with little or no traffic and just the occasional ford where the river runs over the road in winter and leaves sand, stones and rocks for the rest of the year.

The Dades Gorge is just one of the Greatest Roads you can ride with Motorrad Tours. Motorrad Tours is an independent tour operator, which specialises in taking the hassle out of the planning and logistics of riding the world’s greatest motorcycle routes, without taking away your freedom to ride and explore. You can ride the Dades Gorge on their Explore Morocco Tour.

To ﬁnd out more visit www.motorrad-tours.com 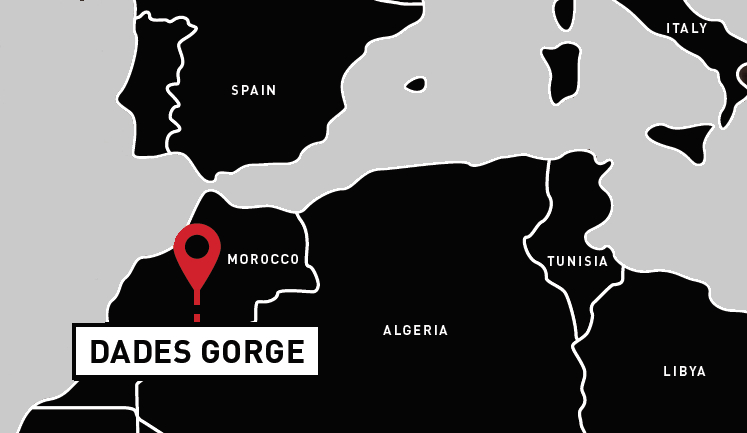