The Bridgestone Bridges of Britain Tour 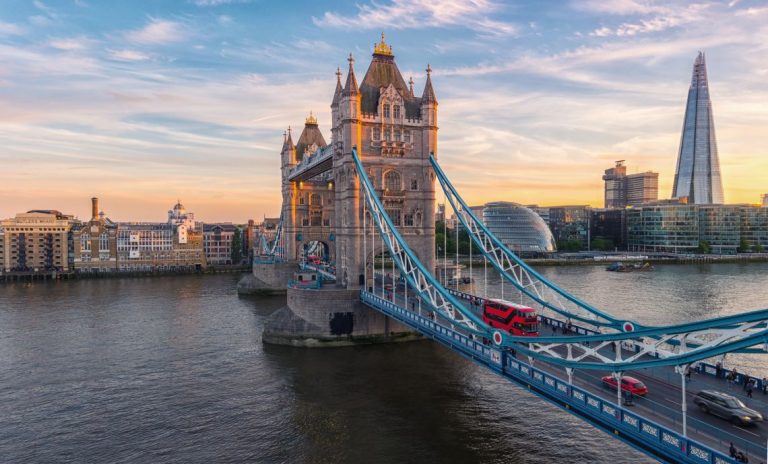 As that most famous of all motorcyclists, Greta Garbo once said ‘I vant to be alone’.*

There are days when only the great wide open will do. The open road, fast sweepers, beautiful countryside and views to sooth the overburdened mind. And woe betide my blood pleasure should I come across another vehicle.

On the other hand, there have been days spent in the saddle touring big cities, riding low miles and hardly engaging third gear where I can say with complete sincerity that I’ve thoroughly enjoyed it. Rome being one example, Paris and the San Francisco metro area being others. There was just so much to see and admire that the traffic and congestion did not bother me in the slightest.

With that in mind, when asked if I’d take over the Bridgestone Bridges of Britain ride for this issue, the thought occurred to me that the River Thames might have a few bridges and it’s been a while since I’ve toured London.

And so I started to plan the ride and discovered that the Thames has over 200 bridges, 27 tunnels, six public ferries, one cable car and a ford. Surely, there must be a few interesting ones in amongst that 200 and maybe I could ride the bike into a cable car when eyes are turned elsewhere.

Being fond of a water splash, the only disappointment was to find that the single ford, at Duxford, Oxfordshire, is closed to traffic and is pedestrian-only. Never to mind, sitting on a V-Strom in a cable car would more than make up for a splash of water on the textiles.

The plan was to start at the furthest bridge to the east, the Queen Elizabeth II Bridge at Dartford Crossing, and follow the course of the Thames all the way west to the nearest bridge to the traditional source at Thames Head, near the village of Kemble in Gloucestershire.

But first, there was some raging controversy to deal with. The Environment Agency, along with the Ordnance Survey and some other agencies neither I, nor probably you, have ever heard of, have been in an eye-gouging dispute about the true source. Some claim the origin to be Seven Springs in Gloucestershire, while others spit bile, stamp feet and proclaim the title to be Trewsbury Mead.

To cut through all this bitter and violent confusion, ABR has decided that the true and only source of the Thames is Thames Head. There’s a very good and compelling reason for this proclamation and it’s down to the fact that there’s a pub there, the Thames Head, and that’s good enough reason for us.

The more I studied the history of the Thames and the map, it became apparent that the ride would be split into several distinct stages. First off, there would be the ride through East and Central London, followed by the contrasting urban and surprisingly green and leafy Surrey border region to the M25.

Next up would be the historic sites and under-rated countryside between Old Windsor and Reading, and then the Thames Valley up to Oxford. From Oxford, it’s the wonderful Cotswolds countryside all the way to Thames Head.

Whichever way you look at it, this route is varied, passing through the most built-up urban region of the UK and some of the most beautiful countryside. All along its length there are historic sites, notable places and fine geographical features of interest, with the obvious exception of Reading, and Slough.

They’ve yet to come up with a word to describe some of the congestion you’ll find in London, but don’t be disheartened because, well, if you’ve not been there for a while, there’s a hell of a lot to jog some old forgotten memories – well it did for me, disappearing off a school trip to the National War Museum to spend the day in a pub being one.

Between the cities, you’ll find some fantastic, uncongested roads where you too can be Greta Garbo. If you make a long weekend of this route and the weather is kind, I promise you, you’ll not regret it.

*By the way, we’ve no evidence to support the claim of Greta Garbo being a famous motorcyclist. Apologies for keeping you waiting so long before full disclosure.

The 5 Bridges of the route

We start our journey at Dartford Crossing, otherwise known as the QEII Bridge, which forms part of the M25. Not the most picturesque of locations, but the bridge is impressive. Heading into London on the north side of the Thames through Dagenham, we decided to head through the old docks area featuring London City Airport, the Excel and views across the water to the O2 (The Millennium Dome) and the cable car crossing just before Canary Wharf.

The ride in the section through Central London can be seriously congested, but the sights are impressive, especially so between Tower Bridge and Westminster Bridge. Plus, you could divert a little north to Shoreditch and check out the trendy and beard infested hipster biker hangout, The Bike Shed. There’s just so much to see here you could spend all day ticking off sites whilst brushing up on your filtering skills.

After buzzing past Kew Gardens we decided to stop off for a coffee at Richmond Bridge, an 18th century stone arch construction. It’s a grade I listed building, built between 1774 and 1777, and is famous for being the oldest surviving bridge in London. There’s a convenient slip road on the Twickenham side of the bridge where you can park up and check out the surroundings.

The ride then takes you past Twickenham Stadium, the home of English Rugby, and onto Chertsey and Chertsey Bridge, which was built in 1783 at a cost of £6,813 and is Grade II listed. From Chertsey, it’s a surprisingly leafy ride to the site of the Magna Carta at Runnymede and a pleasant skip up the Thames through Old Windsor and Windsor by crossing the Albert Bridge into Datchet, which must be the plane spotter’s dream being directly under the flight path to nearby Heathrow.

The Thames takes a long meander north from Windsor, curling back south to Marlow, where you’ll find a single lane suspension bridge that was opened in 1832 and restored in 1965. The riding in this section starts to become more flowing and rural, and you’ll lose count of the number of cricket pitches you’ll pass. From Marlow, the Thames takes a southwest direction through Henley-on-Thames and Reading, before taking a turn north-west through the Thames Valley toward Oxford.

You can either take the fast route (A4074) or plod along the country lanes hugging the line of the river. We stuck with the river, crossing over the Whitchurch Toll Bridge at Pangbourne (free to motorcyclists), one of only two privately owned toll bridges across the Thames. Whichever route you choose for riding the 22 miles to Oxford, the roads and scenery are what the tourist board would call charming middle England.

You could spend a day riding around the city of Oxford, taking in the sights and sounds of one of England’s most popular destinations. If you’ve not yet visited the Ashmolean Museum, then that’s a stop off I’d recommend. The museum is free to enter and is bursting with art and history, including rooms full of spectacular Ancient Egyptian artefacts.

From Oxford, the Thames heads slightly northwest, before dipping southwest and into the wonderful countryside known as the Cotswolds.

There are many different routes and roads you can take through this section, staying either north or south of the river course, but if only to say ‘you’ve crossed it’, make sure you take in Newbridge, which was built in the 13th century and is the oldest surviving bridge across the Thames.

It’s a short ride from Newbridge to Tadpole Bridge on the road between Bampton and Buckland. It’s a single lane stone arch built in 1784 and on the south side you’ll find The Trout public house, which is the perfect place to call it a day and stop off for the night.

If you’re running short on time, the quick way from Tadpole Bridge to the source of the Thames is via the A420 towards Swindon and then the A419 to Cirencester. However, I urge you to find the time to check out the wonderful scenery and roads in this section.

Purists will want to follow as close as possible to the line of the Thames, but taking time out to wander down the lanes less travelled to places such as Burford and Bilbury will show you some of the best countryside in the Cotswolds, if not the country.

The village of Kemble is just to the south of Cirencester on the A429 and the first bridge on the Thames is about a half-mile to the north of the village. On some maps, the River Thames is showing as starting north of the nearby A433 (Fosse Way) and therefore, there should be a bridge. We checked this out and found no evidence, so the bridge at Kemble is it. All that’s left to do is to pop into the Thames Head Inn (on the A433) and wet the river’s head.

One thing’s for sure, if you’re planning on a long weekend you’ll not be short of places to stay on this route as you’ll be passing hundreds of hotels and B&Bs. We stayed over at The Trout, besides Tadpole Bridge in the Cotswolds leg of the trip and can highly recommend the location, drink, food and rooms.

We collaborated with Bridgestone to create this series of routes (there’s more to come in future issues) to announce the launch of the company’s new adventure tyre, the Bridgestone Battlax Adventure A41.

The adventure bike-specific A41 takes over from the excellent A40 and offers improved grip in all conditions, especially so in the wet. It also comes with better handling in corners and maintains the long-lasting tradition of the A40.

We’ve had A40s fitted to our long-term V-Strom 1000, which we’ve ridden extensively solo and with a pillion. Plus, we’ve been on launches in a rain-soaked Spain and checked them out both on and off-road in dry conditions in Morocco. We can sum up the performance in all the above conditions in one word – superb.