The best of the Yorkshire Dales by motorcycle 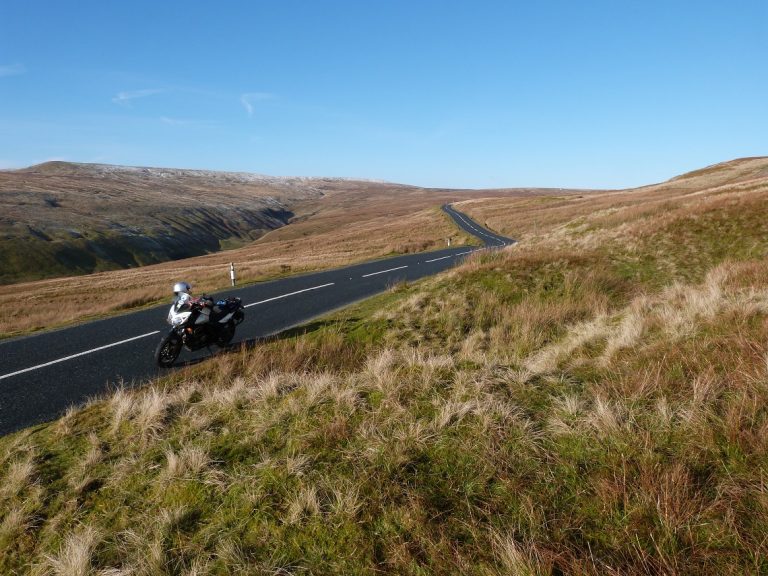 THE BEST OF THE YORKSHIRE DALES

Wordsworth, Turner, Wallace and Gromit… the Dales have inspired some of England’s finest exports. James Owens is exploring this glorious corner of Yorkshire by bike. Say ‘cheese!’

Like all good things, the best approach is to start at the top and work your way down, and the Dales is no exception.

You can’t get any more ‘at the top’ than the world-famous Tan Hill Inn in the village of Reeth, which holds the record for being the highest pub in Britain at 528m above sea level. The perfect start point then for our blast around this part of Yorkshire.

Climbing the lonely road to the pub, it’s amazing how rapidly the temperature drops from a warm (to me) 9ºC to a chilly two degrees that has the ice warning light on the VStrom lit up like a Christmas tree.

Take care on this road; I was confronted by several patches of laid water that had turned to slippery ice. It takes a steady hand and a solid nerve to play on this route and the weather front up here comes in at a shocking rate! 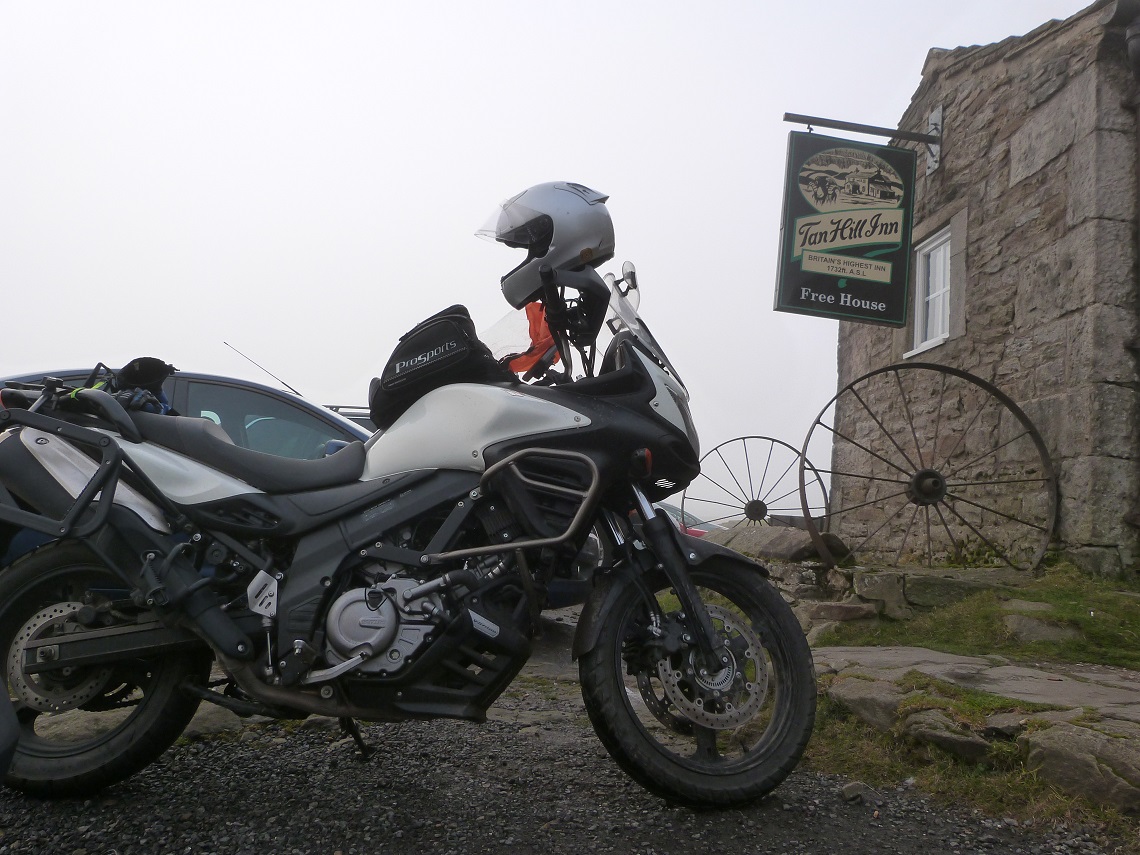 By the time I got to the pub door the cloud had moved in and I could see maybe 20 metres in front of my visor, just enough to spot the myriad students, wrapped up in GoreTex and tweed, wandering off into the mist, possibly never to be seen again.

While the air is cool, the welcome is warm at the pub and it’s a shame to report that, as we go to print, the Tan Hill Inn is for sale. A good business opportunity for a restless ABR, perhaps?

Heading down the Dales, I took the Stonesdale Lane that leads onto the B6270 before running the Cliff Gate Road. The vistas down this route are simply stunning; I’d go so far as to say they’re among the best I’ve seen so far as I travel this Sceptred Isle. Here, the full view of the Dales is laid out in deep-green splendour with the traditional crisscrossing of dry stone walls. My destination was the Green Dragon Inn, Hardraw. This is where you’ll find Hardraw Force, the highest unbroken waterfall in England, which inspired William Wordsworth to put pen to paper and JMW Turner to pick up his brush.

The Green Dragon Inn is a quirky little place that hides some wonderful grounds. Visitors can walk around the 15acre site at their leisure and there’s plenty of parking for your pride and joy. There is, or was, a sign on the inn that reads: ‘Hippies use backdoor – no exceptions’. There wasn’t a sign for bikers, however, so I was forced to use my initiative.

The Green Dragon is run by Mark and Yvonne and the whole place is like a step – or two – back in time. Large beams run across the ceiling and the focal point is a huge open fire, so warm and inviting after the chilly ride down from Tan Hill.

Having embraced the bitter cold run of Tan Hill and been inspired by your own muse at the sight of Hardraw Force, it’s now time to tease the taste buds with some traditional Wensleydale. Hawes is the home of the Wallace and Gromit Wensleydale Creamery.

The title spouts that it’s the only home of real Wensleydale, much like the way ‘champagne’ that’s not made in Champagne is just fizzy stuff, Wensleydale not made in Wensleydale is just cheesy stuff, I guess. I’m not a great connoisseur of cheese; at least I wasn’t until I’d been on a tour of the Wensleydale factory and had a good telling about all the stuff that goes into making my cheese on toast. The highlight of the tour has to be the gift shop. In here you’ll find a very busy café and a place to buy the usual gift-shop tat, nothing new there really. 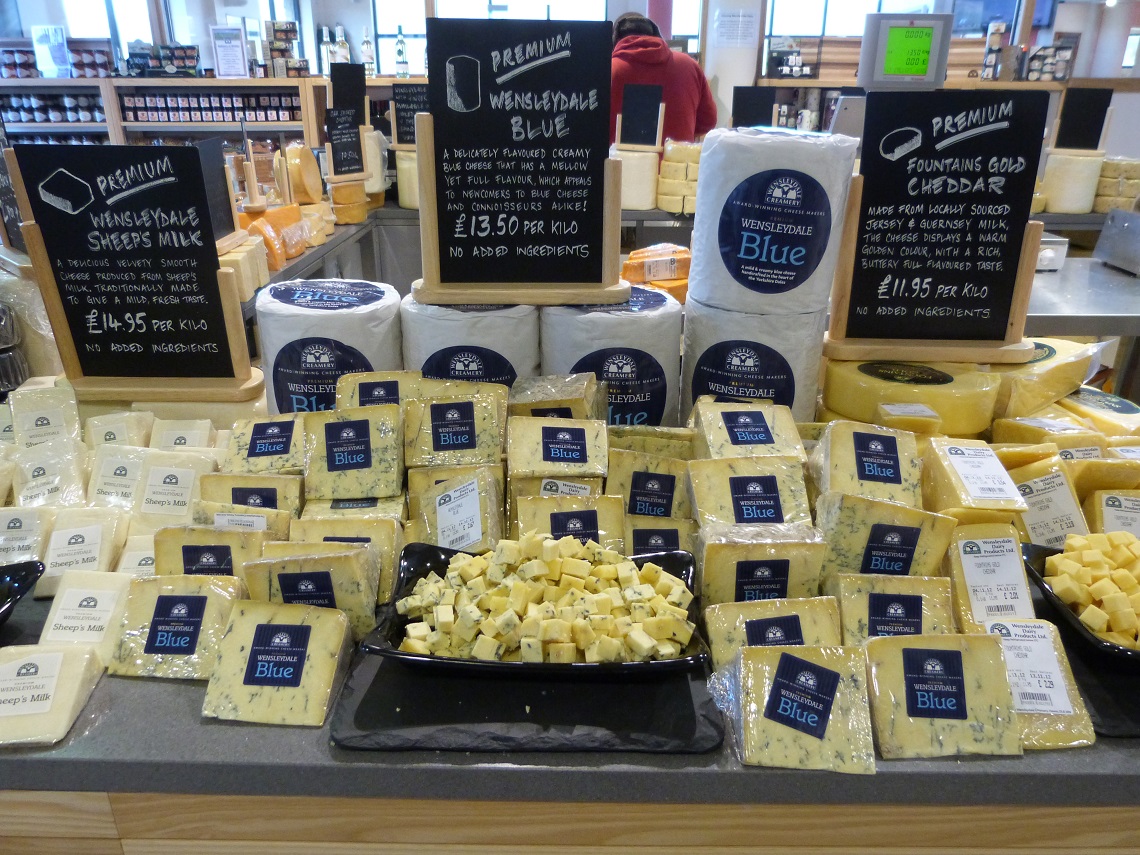 But venture just a little further round the corner and behold! The Cheese Room! A refrigerated paradise awash with cheese-tasting samples. They have everything in here from traditional creamy Wensleydale to hot-and-spicy mixes, all in tantalising little cubes ripe for the taking. If I’d planned ahead, I could have brought a tin of pineapple chunks and had myself a little party.

By the time I reached the exit, I was stuffed to the breeches with cubed cheese. The only drawback was that I had to chew slowly and have a ‘connoisseur’s’ look upon my face instead of the ecstatic ‘free cheese!’ face, which came more naturally to me.

Off next down the B6255, a fantastic, funky little ride that has all the twists, turns and views you could hope for. Take your time and play on the roads, but remember to ride with care and courtesy through the villages. If, like me, you have a belly full of various cheese cubes in the turn, ensure that your pants are windproof. I was almost jet-powered by the time I got to the Ribblehead Viaduct, an imposing sight amid the Dales.

At 400m long and 32m at its highest point over the valley, this monstrous railway bridge is not to be missed. Comprised of solid stone, supporting a total of 24 magnificent arches and foundations 7.5m deep, this was a massive feat of engineering for its time when it was built between 1870 and 1874.

There’s a small layby just past Ribblehead Railway Station that offers a superb view of the viaduct. A large snow-covered hill (at this time of year anyway) completes the vista. It really is worth taking the time out to have a brew and a snack while marvelling at the blood, sweat and tears that must have gone into constructing the thing. 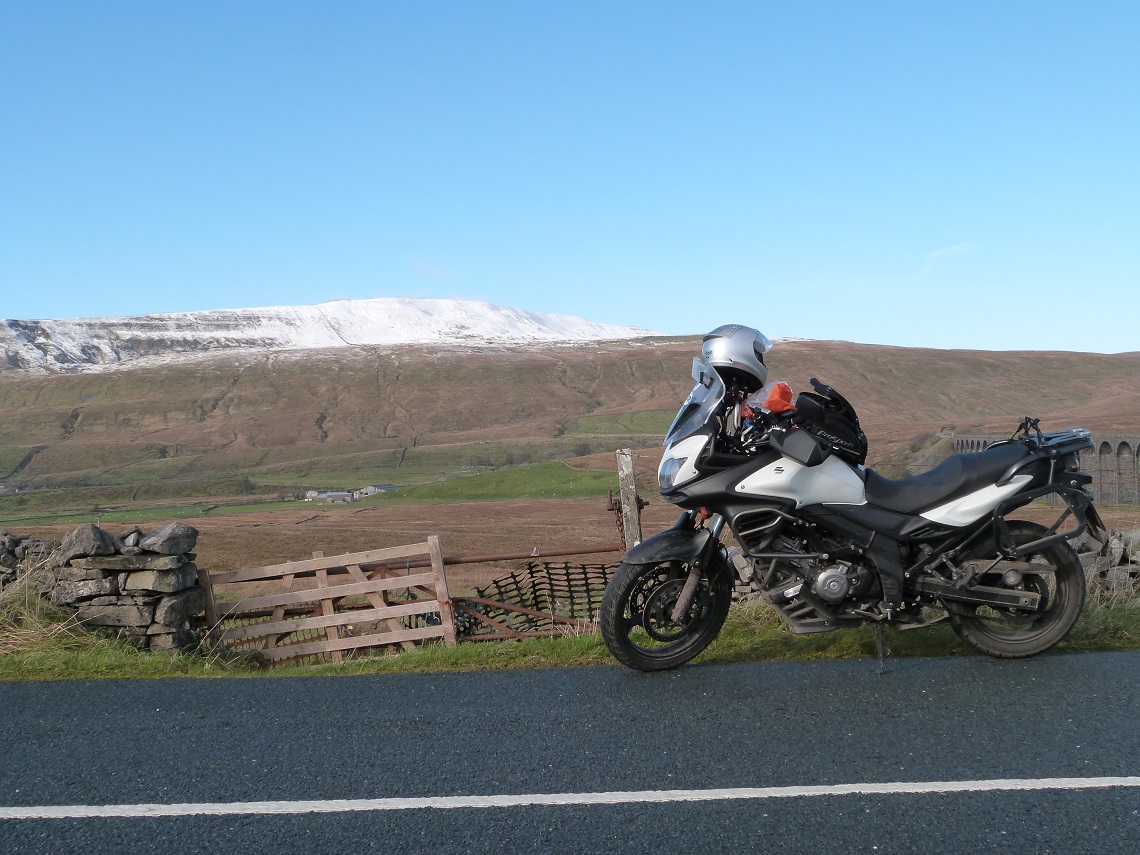 Head on down the B6479 for a fun-filled view that will make you appreciate this beautiful little island all the more. The roads here are well maintained and the steep dips will give even the most stone-faced biker something to grin about. Eager to learn a little more about the history of the Dales, I was on a mission to the lime works. Apparently famous for bricks and ceramic, I headed down the B6479 to seek out one of these Hoffman Kilns for myself. Having sat disused for many years, the kiln is hard to spot and looked very much like a hill to me. It’s possible to enter the kiln at various places, but it’s a right bugger to find.

About a mile before Langcliffe, you’ll see a railway line on your left. A turning for a small road that runs the railway line will take you to Craven Cottage. From there, you’ll see a large car park. Leave the bike here and you’ll be able to wander around the little nooks and crannies and have a poke inside the old kiln. It’s an odd little place, and if you get there at the right time, photography enthusiasts will have hours of fun playing with the light as it bounces off the surrounding quarry stone and into the kiln.

If I’m honest, there’s not a great deal in these little villages other than the odd store, but it’s all about the ride, not the destination, and for that, these villages are ideal because the grin-factor on the surrounding roads is off the scale! Twisting and playing up and down the gears amid stupendous views, this ride unifies man and machine.

Single lanes turn into dual lanes and back again, warning signs of ‘twisting roads’ litter the verges, and even in this wintery weather, I had an absolute ball! If you’re feeling particularly adventurous and don’t mind some gravel work then you could take in Malham Tarn.

This route is on minor roads, the condition of which varies with the seasons. If you’re willing to give it a go, the reward is finding yourself at the highest glacial lake in England, with views to match that boast. 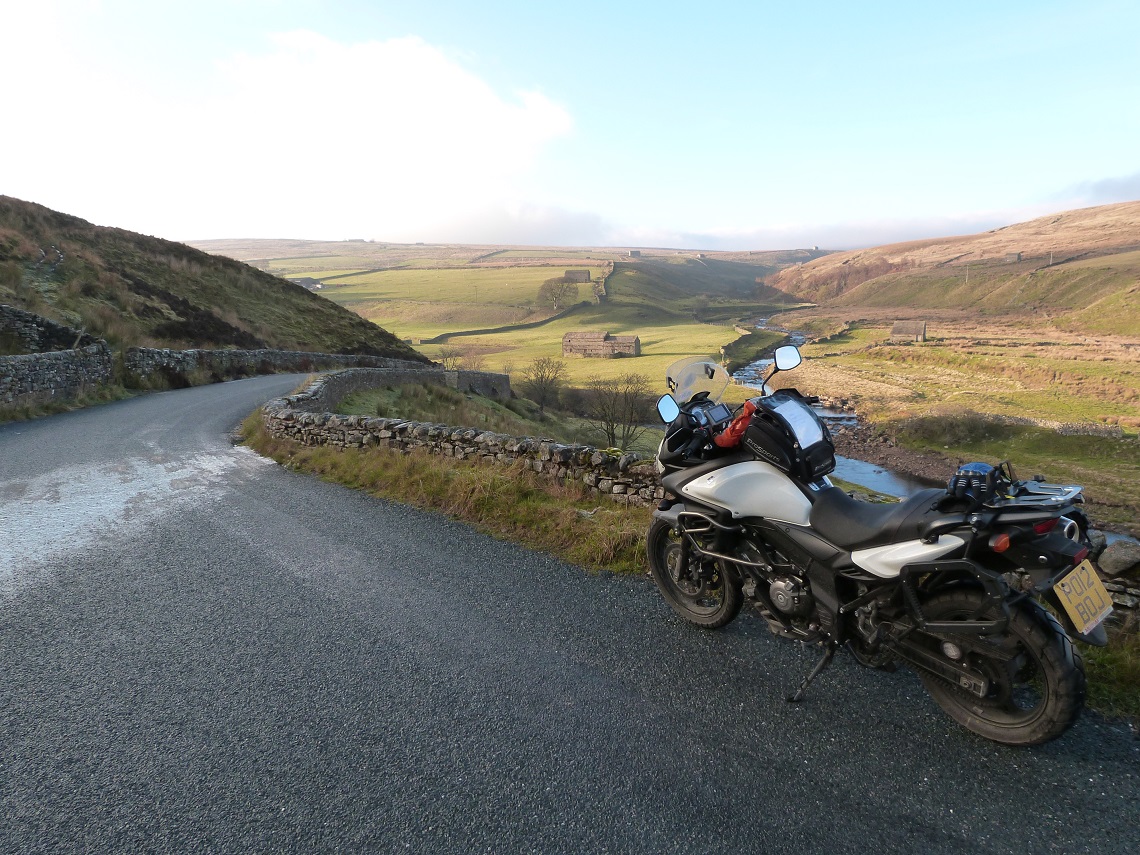 All the way up the B6160 is St Andrew’s Church, Aysgarth, reputed to have the largest graveyard in England at over four acres and with 942 headstones. More than a record-breaking church, this magnificent building dates back to the 13 century and houses the spectacularly painted wooden Rood Screen, which was rescued from nearby Jervaulx Abbey during the dissolution the monasteries in 1536.

Legend has it that the screen was transported whole on the shoulders of 20 men! Just up the road are the beautiful Aysgarth Falls. Remember the infamous stick-fight scene between Robin Hood and Little John in that film with Kevin Costner? That was filmed here! Given the temperamental British weather, odds are you’ll encounter some serious gushing power from the triple flight of falls, which are a popular tourist attraction.

This is the famous A684 run. Now I for one am not so keen on A roads, but this route is a classic that takes you from Aysgarth to Sedbergh via Hawes and out the other side of the Dales to the M6. Take your time and enjoy the undulations of this cheeky little A road.

Along the way, you’ll be greeted by villages dotted in the midst of the fine stone-walled farmland, and in the summer, hundreds of bikers. You’ll end up with a sore neck from all the nodding. Even in the bleak winter weather I was still nodding and waving to riders on all manner of machine.