Sweden is a great country for touring, here’s why 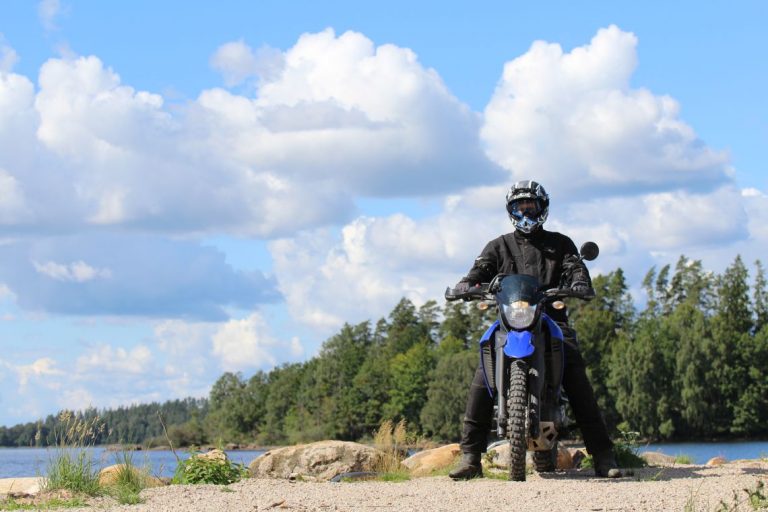 There’s more to Sweden than ABBA and Ikea, Mats Jonsson tells us more about why it’s a great country for touring.

ABR: What makes Sweden a great country for ABRs?

Mats Jonsson: First of all, as a country, Sweden is not very heavily populated. There are nine million of us but we live mostly around the urban areas. Outside of these places, in the countryside, there aren’t many people at all. Mother Nature gave us a good mix here – we’ve got forests, areas of fields and then, amazingly, just over 97,500 lakes which are great for fishing, canoeing or bathing in after a long day in the saddle.

ABR: Is Sweden a safe country to ride in?

MJ: I must say, compared to the UK it’s safe and it’s also calmer to ride over here. We have less cars on the roads and our traffic is not so fast. If most of your riding is to be done in the countryside then you’ll find it incredibly relaxing, but if you need to get in touch with someone most of the country has mobile network coverage.

ABR: Is the wildlife dangerous in Sweden?

MJ: On the whole, the wildlife moves at dawn and twilight – and since most people ride in summertime the days are long and we can avoid riding at this risky period. If you ride on the bigger roads there will be fences to stop the animals from wandering on to the tarmac.

ABR: Isn’t it cold in Sweden?

MJ: Yes, it’s cold here – but mostly in wintertime and we don’t ride then. In northern parts of the country, it’s popular to ride a snowmobile instead of a motorcycle. The riding season for south Sweden starts in April and ends in October, so if we get some nice days in spring everyone gets out on two wheels for the first ride of the season.

ABR: Is it possible to ride Sweden in the winter?

MJ: It’s possible but not recommended. It’s often below zero in the south and the further north you get the colder and snowier it is.

ABR: When is the best time to ride Sweden?

MJ: From May until September is the best.

ABR: Is it expensive?

MJ: Sweden is known as an expensive country but if you try it’s possible to make it cheap. You can wild camp pretty much wherever you want, but if you want a campsite with facilities you can expect to pay about £25-30. If you stay out of restaurants and cook your own food you’ll find it’s not much more expensive than other European destinations.

ABR: If my bike breaks down is it hard to find a good mechanic?

MJ: Many people in Sweden have a genuine interest in restoring old cars, bikes etc. (it’s what many people do in the winter months), so there’s a big chance that you’ll find someone with good mechanical knowledge. Also, when you’re in the countryside it’s usually not difficult to find a farmer or someone who’s willing to assist you with tools and basic knowledge. Most people here speak English as well so communications should be fine. If you ride north it’s a long-distance between settlements, like 50km.

ABR: What are the most suitable bikes for touring Sweden on?

MJ: It depends on what kind of road you like to ride. Many of the roads are winding gravel roads, sometimes hard surfaces and sometimes loose – there really is such a mixture and average speed is usually not very high. If you stick to the tarmac then you’d be happy on a big 1200.

ABR: Are you allowed to ride off-road in Sweden?

MJ: On many gravel roads there’s no problem however on smaller roads it’s up to the landowner and if they don’t like people riding on their property they’ll put up a sign. If you want to ride entirely off-road then you’ll need to contact an enduro or motocross club, they may let you use their tracks but riding where there is no road or track is not allowed.

ABR: Are there any laws about wild camping?

MJ: By law you’re allowed to wild camp one night anywhere without permission, common sense dictates that you don’t try and camp on someone’s garden. ‘Everyman’s right’ is a freedom granted by the Constitution of Sweden and it allows you to camp on any land (with the exception of private gardens) as long as you ‘leave no trace’ and respect the nature by not leaving any rubbish or breaking any branches etc. It’s great to camp in the summer and if you get a fishing permit you can catch your own fish and have grilled fish by the riverside as the sun goes down. Bliss.

ABR: Where are the best regions to ride in Sweden?

MJ: If you like adventure Sweden is a great country because there is so much outback. If we start in the south there are lots of small lakes to see. When it comes to smaller trails Småland is the best area. Though you can, of course, find adventure in other regions of Sweden. A little more north there’s more highway riding – beautiful, curvy roads with varying scenery surrounding them.

ABR: Are there any areas I should avoid?

MJ: No, not really. But I’d avoid the big motorways! The smaller the better as you’ll be able to see small villages, nicer views and get closer to the common life.

MJ: Swedish food is nothing strange and as long as you avoid the fermented herring in a tin can (it’s a classic but it smells awful!) you’ll be fine. You can try some of the wild meat, like deer, wild pig or elk but it’s not so easy to find in your ‘average’ restaurant. The rule is you get what you pay for.

ABR: What else is there do to in Sweden when I want to take a break from riding?

MJ: Sweden is a great place for outdoor activities. Since you will probably come here in the summer there’s a ton of things you can do! If you travel to the very north you can go skiing until midsummer, if you’d like to exchange your two wheels for four legs then horse riding is also very popular. Hiking is another choice in the mountainous areas along the border with Norway and you can also go rafting on the big rivers in central and northern Sweden. I’d recommend visiting the theme park that’s built around the character of Astrid Lindgren’s books, like the famous Pippi Longstocking. This can be found in Småland in south Sweden. If you’re in Stockholm or Gothenburg you can visit the big archipelagos by boat, a nice change if you want a rest from the bikes for a day or two.

ABR: What’s the benefit of joining a guided tour around Sweden?

MJ: We are born here and have been riding since childhood so we have a good knowledge of the roads and the country. Over the years we obviously come to know the best routes, trails and areas to ride so your guide will be able to pick out a day’s worth of roads to keep you smiling.

ABR: How many different tours do you offer and for how many days do they run?

MJ: We operate mainly in the south of Sweden and we have three different packages; one of four days with three days in the saddle, a seven-day option with five days riding and finally a ten-day ride out with seven days of riding and a rest day. The tours are made for those who enjoy active riding, good dining and we’re going to launch a new tour which focuses mostly on great views. This will start in south Sweden and head up the border with Norway and over to the spectacular fjords, ending in Oslo eight days later.

MJ: Everything’s included except the drinks and flights! We have a professional guide who leads the group and you don’t need to worry about anything because we’ll bring a spare bike, spare parts and a mechanic in the support vehicle that will carry your luggage. In the evenings we arrange various activities, like clay pigeon shooting, canoeing and we stay in mainly four-star hotels.

ABR: What riding abilities are your tours for?

MJ: Our ride-outs aren’t very technical as we want most riders to be able to take part. We focus on the average rider and, as usual, you adapt your speed to your skill. If you prefer to ride on tarmac we can set your Sat Nav so that you’ll be able to follow us on that kind of road.

Born and bred in Sweden, Mats Jonsson runs a tour company called Magic Motor Experience (visit www.magicmotorexperience.com). The company offers three guided tours (choice of four, seven or ten days) which take in the best roads and scenery that Sweden has to offer. All tours are on the Yamaha XT660R, a support vehicle is provided and various activities (such as clay pigeon shooting, lake swimming and spa evenings) are offered in the evenings.